Existentialism is a major twentieth century continental European philosophical movement. The label was inspired by the tendency of some of the writers like Kierkegaard, Heidegger , Sartre and Nietzsche to use the term “existence” for a kind of being or life unique, in their view, to human beings. Only in the case of human beings is the conduct of their life an “issue” for them; only they can “stand out” – exstare, the Latin word from which “exist” comes – from their lives and reflect upon them; and only they have the capacity freely to shape their lives.

Don't use plagiarized sources. Get your custom essay on
“ Existentialist traits in works of Henrik Ibsen ”
Get custom paper
NEW! smart matching with writer

Though Existentialism can appear in a number of different forms, the focal point as Jean Paul Sartre puts it is “existence precedes essence”.

The existentialists are of the view that as there is not pre-determined course of human life, they are only what they make themselves. This gives human beings a freedom to choose. Human beings have to make choices or are rather “condemned ” to make choices and bear their consequences.

Every act is conscious and so all the responsibility falls on their shoulders with no one to rely on and thus give rise to feelings of despair and anxiety. All of which had been sensitively explored earlier in the century by such literary figures as Luigi Pirandello (1867-1936) and Franz Kafka (1883-1924) and can seen to be already an abiding concern in the works of Henrik Ibsen (1828-1906).

The Norwegian playwright, Henrik Ibsen a was an advocator of individualism and was against the social norms which shape the lives of human beings.

His characters live themselves out in the spirit of reckless and vehement self-assertion – superman and superwomen. Ibsen was a believer in freedom to will. Many of his characters can be seen in this light who reject to be shaped by some force outside their own will.

In his famous and controversial play “A Doll’s House” the character of Nora sheds the cloak of “being-for-others” and set out in a search for being-for-self. She says in the end “we both must be perfectly free”. As Nietzsche’s ideal of human personality combined the virtues of the warrior and the independent thinker and it preferred the difficult life to that of an easy one , in similar way Nora has to leave her shelter and get out in the open to find her self and think of what she is.Helmer on the other hand can be see as a victim of “bad faith” who goes on to follow himself identifying too completely and mechanically with a fixed role that absolves him from having to face up to decisions and surrenders to the role which society has coined for him letting the norms dictate him.

Ibsen shows the struggle and “nothingness” of life in his verse play “Peer Gynt”. The play echo’s many of the characteristics of existentialism. Peer Gynt ,the protagonist of the play , starts out as a highly imaginative, irresponsible youth to find himself only to know in the end that he has no self. He often misquotes proverbs or scripture to justify his actions. The play poses many questions , religious and social , as to how far a man is free to make choices and what kind of choices he has ? The play also asks the pivotal question that what is a man expected to do with is life?

There are many instances in the play where Peer has to make a choice . Early on he has to decide whether to become a true man or become a Troll and the end shows the consequences he bears for this choice. Peer moves in a world which is full of uncertainties and he is burdened with the responsibility of shaping his life without anything to hang on to, a lamentation so often cried out by the existentialist playwrights and philosophers.

Peer, all through the play is baffled with the choices that he has to make . After he has escapes from the Troll’s Kingdom he says:

“Go in after this? So befouled and disgraced?

Go in with that troll-rabble after me still?

Speak, yet be silent; confess, yet conceal – “

The stage instructions shows several times his reluctance in moving forward , and small actions mark the important decisions in his life. In the first act when he has to go to the wedding of Ingrid, the girl he had formerly detested , their a series of step taken forward and backward

[PEER GYNT comes along a footpath, goes quickly up to the fence,

stops, an looks out over the stretch of country below]

[Puts one leg over the fence; then hesitates.]

[Draws back his leg.]

By making the choices which he has to make , Peer not only takes the responsibility of his own life but shapes others destinies too. Solveig, the girl who loves him truly, comes to him leaving all that belonged to her and thus she makes her choice , not aware of its consequences.

The path I have trodden leads back nevermore

After he leaves the Troll princes and comes back to Solveig , his true love , and thinks that his life is free from worries , the Troll princes comes to see him. He is again caught in a fix and has to chose between the two , he is now a father and has to bear the consequences of the deeds which he performed earlier in his life. And he has to bear it alone .

“The emptiness and hollowness of human life which Sartre calls “nothingness” is also portrayed in a striking scene in Peer Gynt by Ibsen. The aging Peer Gynt is peeling off the layers of an onion, and playfully compares the single layers with the periods of his life, hoping at the end to come to the core of the onion and the core of his own personality. But layer follows layer, period after period of life; and no core is found.”(1)

the Gyntish Self, it is the sea

all that, in short, makes my breast heave,

In fourth act of the play , when he visit Gezih, a village near Cairo, he is asked about his identity and he replies

” I’ve always endeavoured to be

All his pride comes to an end when he is confronted with the final moment of his life. His meeting with the Button-moulder revleas on him that he has not identity what soever and so he has to be melted down and made into something useful.the fact that he has essentially no identity of his own and is as useless as a button without a loop.

Yourself you never have been at all;–

then what does it matter, your dying right out?

Have I not been–? I could almost laugh!

Peer Gynt, then, has been something else, I suppose!

No, Button-moulder, you judge in the dark.

If you could but look into my very reins,

you’d find only Peer there, and Peer all through,–

nothing else in the world, no, nor anything more.”

Not only is man what he conceives himself to be, but

thrust towards existence.Man in nothing else but what

he makes of himself. Such is the first

This is the dilemma that Peer confronts in his encounter with the Button Molder, when he is brought up against the realization that he may have no authentic identity at all.(2)

“So unspeakably poor, then, a soul can go

back to nothingness, into the grey of the mist.”

Henrik Ibsens plays depict characters like Hedvig, Hedda ,Nora,Peer and Brand show the problems of human beings who do not want to be defined and want to “stand out”. 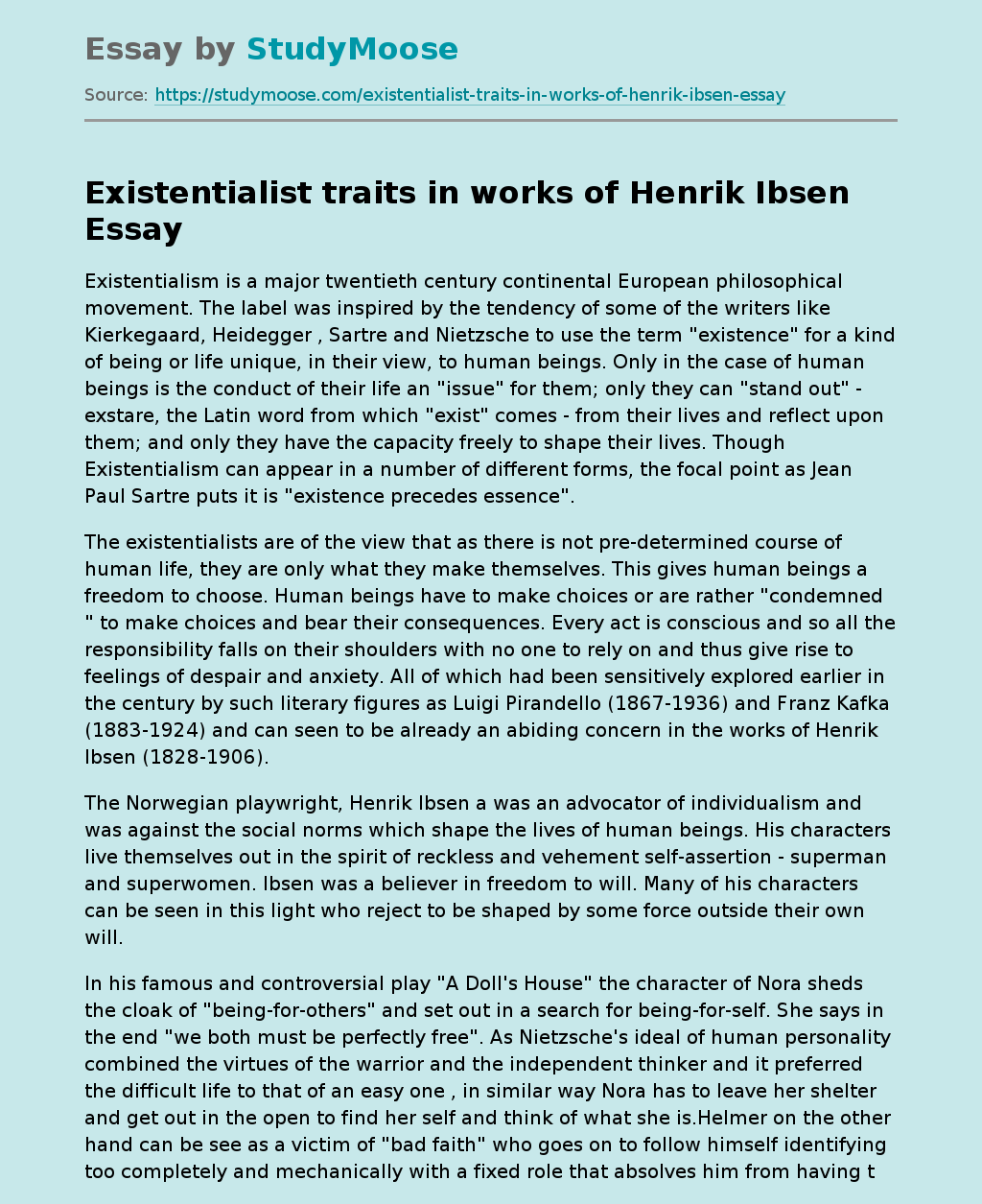