Themes of a Doll House

In Henrik Ibsen controversial play A Doll House there are many themes that are intertwined into the story of Nora, Torvald Helmer and Krogstad. Themes that if not looked for in a complex play as this would be over looked. These themes are the sacrificial role of a woman, gender, and the unreliability of appearance. The first theme in the play is probably the most obvious because this is based completely off what Nora does in the play the theme is the sacrificial role of woman.

Don't use plagiarized sources. Get your custom essay on
“ Themes of a Doll House ”
Get custom paper
NEW! smart matching with writer

Though Nora is economically advantaged in comparison to the other female characters in the play, she nevertheless leads a difficult life because of society dictates that Torvald be the marriage’s dominant partner. Torvald condescends to Nora and Nora must hide her loan from him because she knows that Torvald could never accept the idea that his wife or any other woman had helped save his life. During this kind of society it is illegal for a woman to get a loan without the permission of her husband.

Nora’s abandonment of her children can also be interpreted as an act of self-sacrifice. Despite Nora’s great love for her children, she feels that if she had stayed and had them find out about her actions would corrupt the children and that is her greatest fear and in that she chooses to leave them. The next theme in the play is gender; the play focuses on the ways that women are perceived in their various roles especially in marriage and motherhood.

Torvald, in particular, has a very clear but narrow definition of woman’s roles.

He believes that it is the sacred duty of a woman to be a good wife and mother. Moreover, he tells Nora that women are responsible for the morality of their children. In essence, he sees woman as childlike, helpless creatures detached from reality, on the other hand as influential moral forces responsible for the purity of the world through their influence in the home. Nora’s description of Torvald suggests that she is partially aware of the inconsistent pressures on male roles as much as the inconsistent pressures on female roles in their society.

Torvald’s own conception of manliness is based on the value of total independence. He abhors the idea of financial or moral dependence on anyone. His strong desire for independence may put him out of touch with the reality of human interdependence. Frequent references to Nora’s father often equate her with him because of her actions and her disposition. Although people think he gave Nora and Torvald the money for their trip to Italy, it was actually Nora. She has more agency and decision-making skills than she is given credit for.

Nora seems to wish to enjoy the privileges and power enjoyed by males in her society. The next and last theme in the play is the unreliability of appearance. Over the course of the play, appearances prove to be misleading guises that mask the reality of the play’s characters and situations. Our first impressions of Nora, Torvald, and Krogstad are all eventually undercut. Nora in the beginning initially seemed a silly, childish woman, but as the play progressed we see that she is intelligent, motivated, and by the play’s conclusion, a strong-willed, independent thinker.

Torvald though plays the part of the strong, benevolent husband, reveals himself to be cowardly, petty, and selfish when he fears Krogstad may expose him to scandal. Krogstad too reveals himself to be a much more sympathetic and merciful character than he first appears to be. The play’s climax is largely a matter of resolving identity confusion, we see Krogstad as an earnest lover, Nora as an intelligent, brave woman, and Torvald as a simpering, sad man. Situations are too misinterpreted both by us and by the characters. The seeming hatred between Mrs.

Linde and Krogstad turns out to be love. The seemingly villainous Krogstad repents and returns Nora’s contract to her, while the seemingly kindhearted Mrs. Linde ceases to help Nora and forces Torvald’s discovery of Nora’s secret. Themes in stories, plays and movies are essentially the backbone of the outcome of the story. Without them there would be no meaning to the story, the themes in A Doll House are so strong and meaningful to the outcome of this particular story. This play is riddled with hidden themes and with an eye for detail can be snuffed out with ease.

Themes of a Doll House. (2016, Sep 16). Retrieved from https://studymoose.com/themes-of-a-doll-house-essay 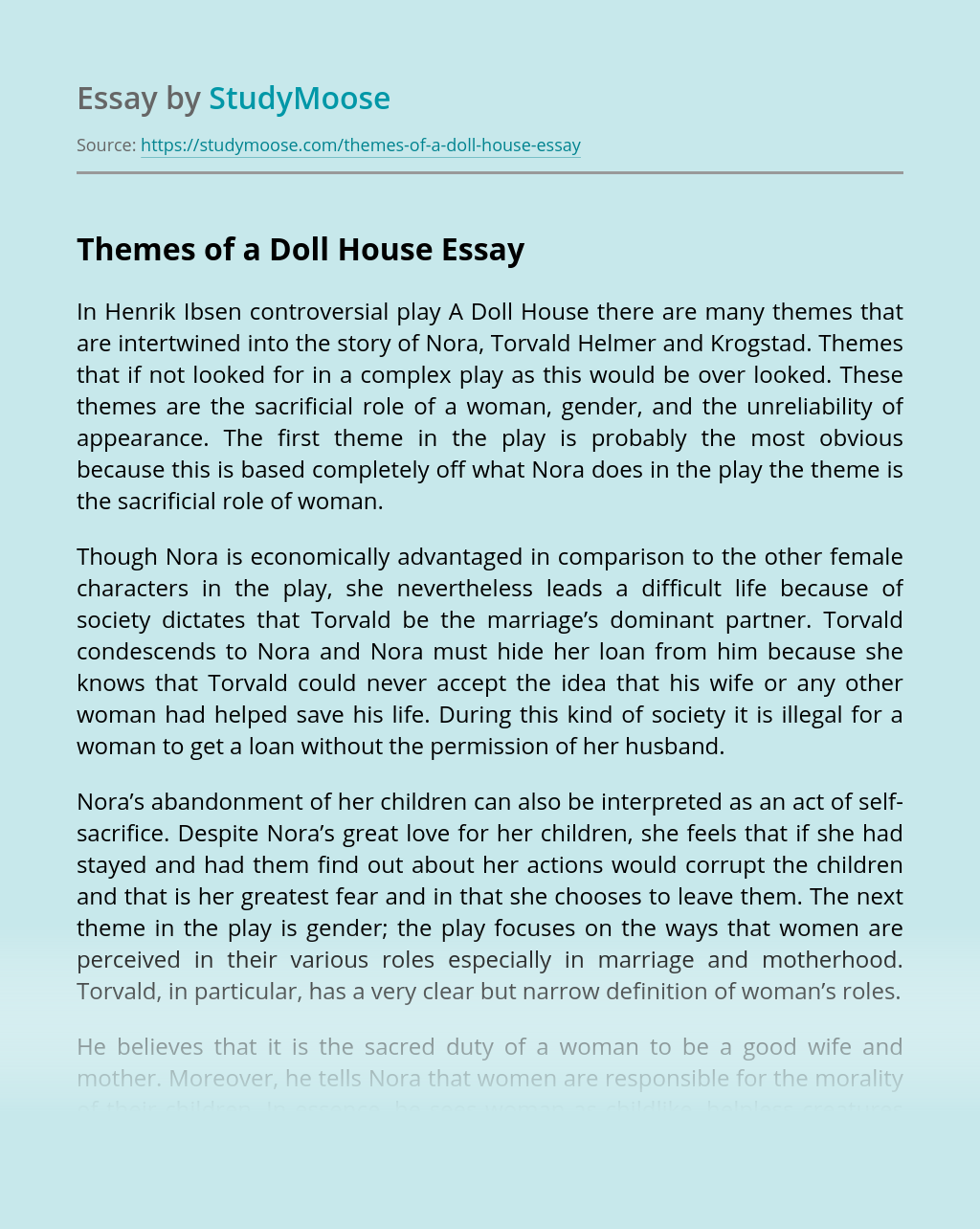