Don't use plagiarized sources. Get your custom essay on
“ “A Dolls House” by Henrik Ibsen and “The power” by Naomi Alderman ”
Get custom paper
NEW! smart matching with writer

Both Ibsen’s ‘A dolls house’ and Alderman’s ‘the power’ are set against a melodramatic backdrop of massive social change. One interesting similarity between these two texts is the way that all of the women in both texts feel stronger and more in control than men – which challenges the cycle of a patriarchal, male dominated society.

In “A dolls house’ this is presented as both positive and negative. Helmer and his children are left without a wife and a mother figure whilst Nora no longer feels restraint from her picture perfect marriage. Nora realises ‘ its no use your trying to forbid me anymore’. Again in ‘the power’ the breaking of the patriarchal society which later transformed into a matriarchal society is presented as both positive and negative.

At first women felt safe and united, however blood thirsty cults are formed in which women cruelly rape and murder innocent men, you are part of a society in which ‘either you are the hunter or you are the prey’.

I interpret Alderman’s equally weighted argument as having a personal and political stance in which she debates what would actually happen if men and women physical capabilities were reversed. However, Nora sees a negative link between her father and her husband when she has an epiphany about her past and present and she exclaims ‘I passed from papas hands into yours’. In both of these texts, social order being changed and one gender having a higher status than the other has catastrophic effects.

A Doll’s House was published in Norway in 1879. The first stage production was in Stockholm, in 1880. The play caused an immediate sensation, sparked debate and controversy, and brought Ibsen international fame. Ibsen felt that, rather than merely live together, husband and wife should live as equals, free to become their own human beings. (This belief can be seen clearly in A Doll’s House.) Consequently, Ibsen’s critics attacked him for failing to respect the institution of marriage. Like his private life, Ibsen’s writing tended to stir up sensitive social issues. In ‘A dolls house’ many versions of irony are used such as verbal irony ‘thank you for your forgiveness’, dramatic irony(in which the audience knows something which other characters in the play do not) and situational irony. This extensive use of irony shows the rocky relationship between Torvald and Nora from the beginning.

Naomi Alderman studied philosophy, economics and politics. She transitioned into a upper-class school where the social divide between her parents and her classmates became apparent. This is channeled and presented in a feminist point of view in which women are physically stronger than men.Alderman became a strong advocate for feminism in her teenage years and has been a strong supporter of women’s rights throughout her lifetime and career. Alderman is a strong advocate of the women’s movement, which inspired her works such as The Power. She advocates for young women to embrace their abilities and awaken the same empowerment in older generations of women. She does not agree with the ideology of men or women being superior to the other, but of the thought all people are equal and should be treated as such. Her viewpoint and support of women’s rights has held great influence over her life’s work.

"A Dolls House" by Henrik Ibsen and "The power" by Naomi Alderman. (2016, Sep 24). Retrieved from http://studymoose.com/a-dolls-house-by-henrik-ibsen-and-the-power-by-naomi-alderman-essay 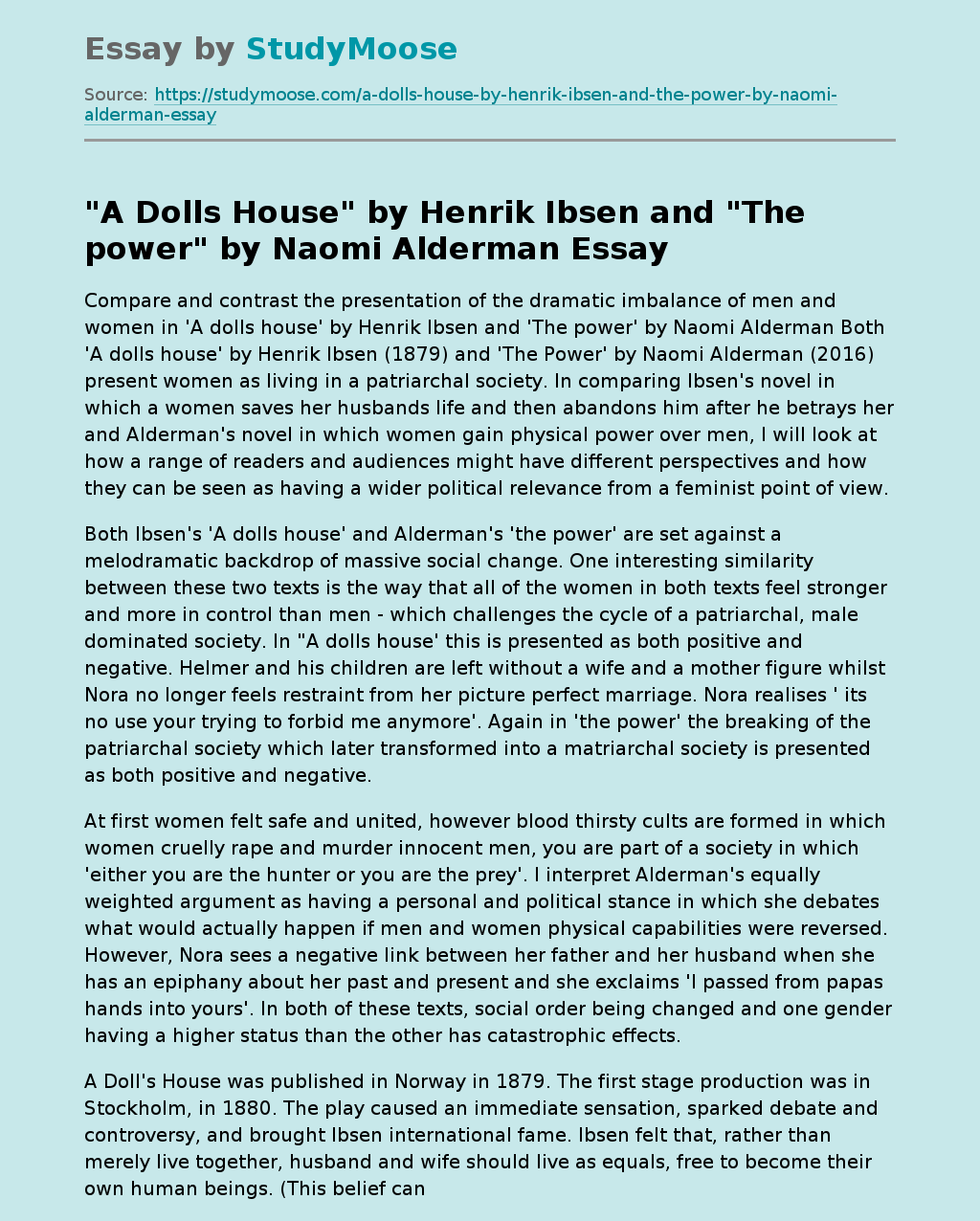