Henrik Ibsen creates many interesting and complex characters in his play A Doll’s House. Both the Helmers and Christine and Krogstad have very fascinating relationships. Nora and Torvald have a very insubstantial relationship in which Nora has no say or independence and is completely under Torvald’s control. Christine and Krogstad have their share of issues but they are able to work them out like reasonable adults. Nora/Torvald and Christine/Krogstad are two fundamentally different sets of people.

Nora and Torvald have been married for a long time and they do their best to make sure they are happy.

Don't use plagiarized sources. Get your custom essay on
“ A Doll House relationship comparison: Nora and Torvald v. Christine and Krogstad ”
Get custom paper
NEW! smart matching with writer

Nora loves Torvald very much and would do anything to for him. “Nora: Now I will show you that I too have something to be proud of. It was I that saved Torvald’s life.” (p.10) Nora was willing to commit a crime for Torvald to keep him from becoming very ill and dying. Torvald loves Nora but sees her more as a child and is generally more concerned about what others think of him then of what Nora thinks.

“Torvald: From now on, forget happiness. Now it’s just about saving the remains, the wreckage, the appearance.” (Act III) Instead of saying that he would protect her he goes into a rage and tells Nora she is unfit to have anything to do with their children. He sees her more as a fragile doll than an actual person.

Nora realizes too late that all she has been to the people in her life is a marionette whose strings are passed back and forth by the male figures in her life.

“Nora: I have been performing tricks for you, Torvald. That’s how I’ve survived. You wanted it like that. You and Papa have done me a great wrong. It’s because of you I’ve made nothing of my life.” (Act III). Her life has just been a performance in which she did her best to please the men in her life. She realizes that in order to become independent that she has to get away. She finally becomes independent at the end of the play and saves herself from what could be called a sham of a marriage.

Christine and Krogstad were married before but Christine left Krogstad for a richer man in order to take care of her ailing mother and younger brothers. Christine loved Krogstad but at the time he did not have the money she needed to insure that her family would be taken care of. Krogstad was devastated after Christine left him, which made him into a bitter, unhappy man. “Krogstad: When I lost you, it was as if all the solid ground went out from under my feet. Look at me now–I am a shipwrecked man clinging to a bit of wreckage.” (Act III) Krogstad secretly still loves her and in the end they get back together. The one fundamental difference between the Helmers and Christine and Krogstad is that they were able to work out their problems and solve their issues like reasonable adults.

Henrik Ibsen creates a fascinating tale filled with intrigue and set of characters that make for a great story. The Helmers and Christine and Krogstad have very different perceptions of what love is. The key to any healthy relationship is to be able to work out your problems and not let anything get in the way of the love felt for the other person in the relationship. Nora and Torvald in the end weren’t meant for each other and Christine and Krogstad, after working out their differences were able to continue on happily. Nora/Torvald and Christine/Krogstad truly are two fundamentally different sets of people. 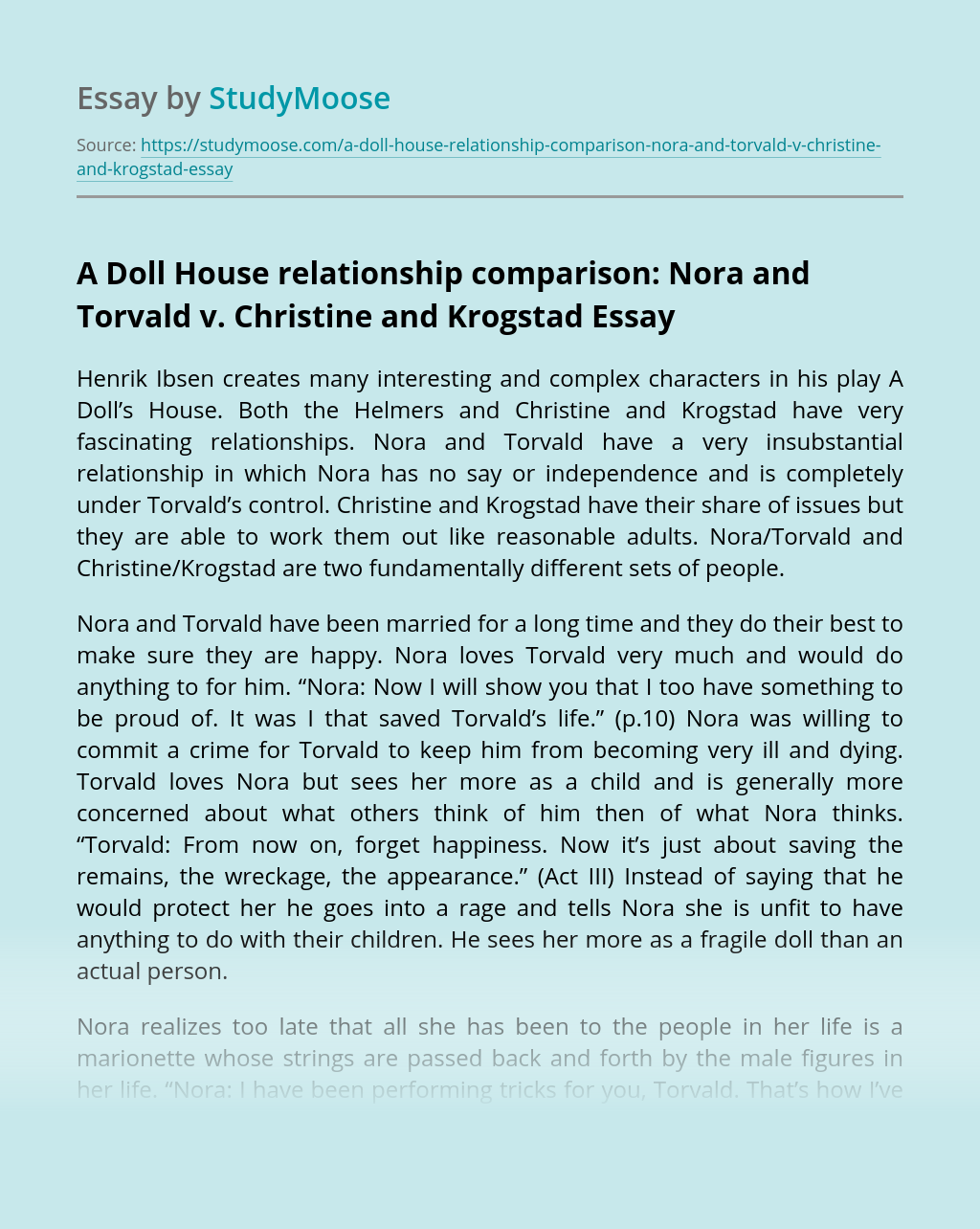