Throughout Hamlet, the profound love he once confessed on Ophelia’s funeral was now being questioned by many readers if weather or not this was true love. The word love is the intense feeling of affection toward another person. It’s a profound and caring attraction that forms emotional attachment. (Admin) Hamlet demonstrated the opposite of these characteristics, his love for Ophelia was influenced by many traumatic experiences he encountered in his own life. He transformed into a self-centered man who was only devoted to find revenge against his evil uncle, King Claudius.

Don't use plagiarized sources. Get your custom essay on
“ Hamlet’s Love for Ophelia in Shakespeare’s “Hamlet” ”
Get custom paper
NEW! smart matching with writer

Although Hamlet claims his great love for Ophelia, his actions began to say otherwise. Hamlet faced many obstacles that led him to question his art of love. He witnessed his own mother marry the brother of her dead husband, months after his death. His mother’s deceiving behavior made him incredibly weary of love and poisoned his idea of it. He winds up transferring a lot of this anger — already poised to hop from one woman to another — to Ophelia.

As he has lost his faith in his beloved mother, he lost his faith in Ophelia because those were the two most important female roles he had. Hamlet is  dangerously strict about love and sex. He is appalled by Gertrude’s show of her pleasure at Claudius’ touch, and now he clearly loathes women. Hamlet strongly believes that women’s love is only temporary, “Ophelia “Tis brief, my lord Hamlet.

As woman’s love” (III,ii,139-141).  As he feels discouraged by love, reason being that if he allowed himself to love Ophelia, he feared to discover that what happened to his mother will happen to him as well.

Hamlet’s change of attitude and rejection: ‘I lov’d you not’ (III,i,114), and his sexual innuendo that he doesn’t love Ophelia. Hamlet states that beauty doesn’t define who you truly are or what you’re capable of. “That if you be honest and fair, your honesty should admit no discourse to your beauty’ ( III,i,105-114). Since beauty’s power can more easily change a good girl into a seducer, than the power of goodness can change a bautiful girl into a virgin. He believes he has solved a great puzzle that he use to love her. Hamlet accuses women for contributing to the world’s dishonesty by painting their faces to appear more beautiful than they are.

Working himself into a rage, Hamlet denounces Ophelia, women, and humankind in general, saying that he wishes to end all marriages. As he storms out, Ophelia mourns the “noble mind” that has now lapsed into apparent madness (III.i.149). The reality she experiences is murky and overwhelming. Hamlet suspects that Ophelia’s love for him is insincere; his suspicions are reinforced when he catches her acting as the decoy of Claudius and Polonius. (III,i,85-90) She is one of many people who betray, or abandon Hamlet; as far as he’s concerned. His father betrayed him by dying; Claudius betrayed him by ‘coming between the election and my hopes’ usurping the kingdom that was rightly Hamlet’s. Gertrude betrayed him by siding with Claudius. Rosencrantz and Guildenstern betray him by agreeing to spy on him. Ophelia betrays him by agreeing to break up with him and then agreeing to become a decoy in her father’s plot.

Hamlet starts to explode of anger: If thou dost marry, I’ll give thee this plague forthy dowry: be thou as chaste as ice, as pure as now, thou shalt not escape calumny. Get thee to anunnery, go farewell. Or, if thou wilt needs marry, marry a fool; for wise men know well enoughwhat monsters you make of them. To a nunnery, go, and quickly too. Farewell. (III,i, 136-142)Hamlet has not confided in Ophelia about his anger and condemnation of Gertrude’s ‘incest,’ and so she’s shocked and confused by the accusations of disloyalty and ‘wantonness’ he displaces onto her. (Smith 97) Ophelia’s betrayal hurts more because it’s similar to his mother’s betrayal having them both make pacts with Claudius, and also because he had feelings for her. Hamlet is now realizing that everyone he trusted and loved, have all let him down. The unreal love that he has for Ophelia proved by the declarations he has made. Ostensibly the promise would have been kept except for her acceptance of his invitation to enter his chamber and engage in sex, but just as likely is the possibility that the young man never intended to marry her, his ‘promise’ being no more than a cheap but successful seduction scheme.

The sexual double standard leaves him with impunity, unfazed, but ruins her., “He took me by the wrist and held me hard, Then goes he to the length of all his arm.”(II, I,87-91) 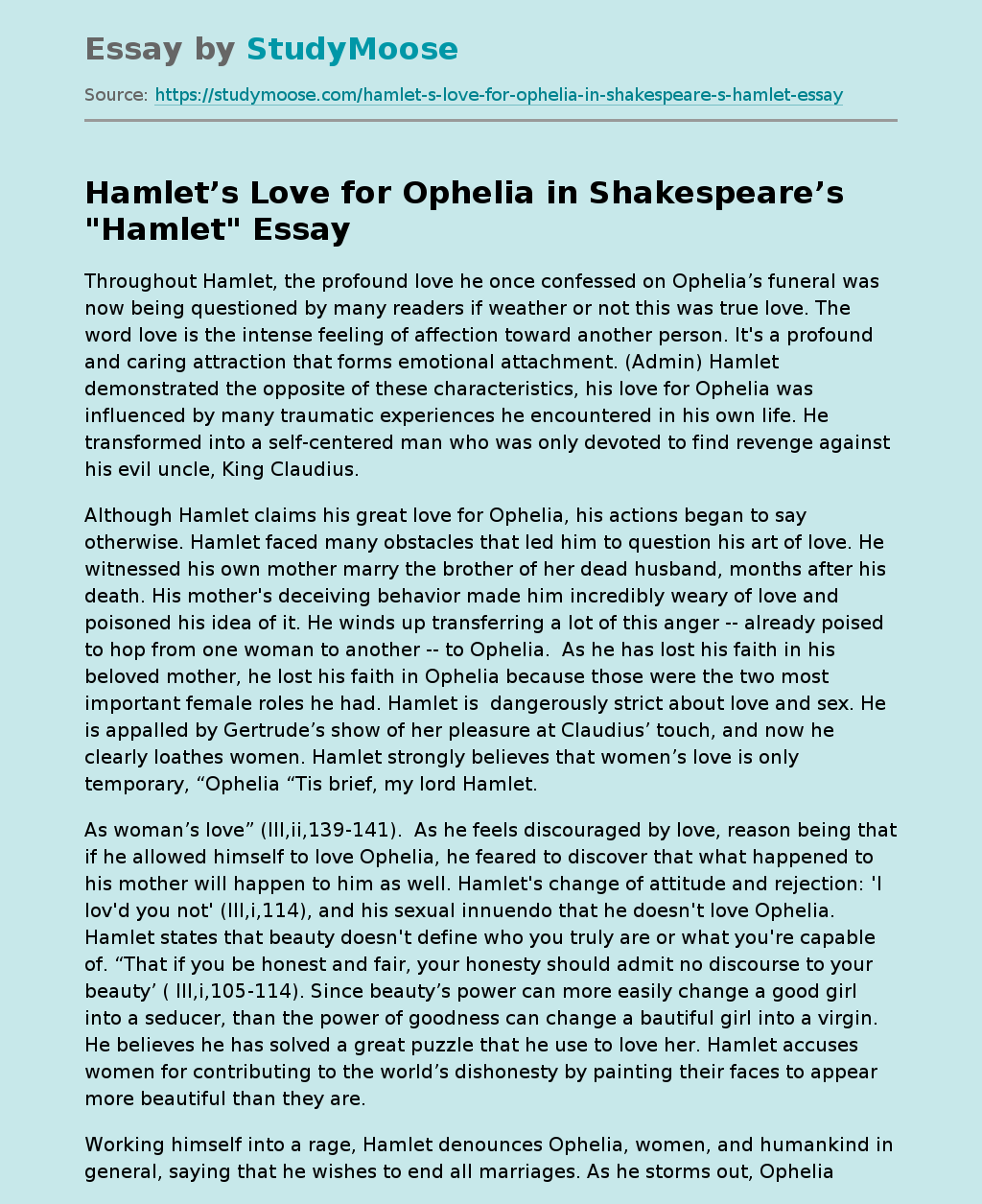