Ophelia and Simbolism in the Play 'Hamlet'

Hamlet is set in a patriarchally poverished society with meticulous dissection accorded to Hamlet, Gertrude, Claudius, or even Polonius, Laertes or Horatio. However, as a minor personage of the tragedy, Ophelia remains devoid of such reception. With Ophelia’s eloquence on mute, this creative engagement seeks to illuminate all objects in the play that are subtle commentary on the injustices of the social realities of early Modern England. For instance, the flowers associated with fertility regulation and Ophelia’s refund of them to Laertes – who tried to restrict her genitalia – refers to the former fighting back against a heavy patriarchal backdrop.

Don't use plagiarized sources. Get your custom essay on
“ Ophelia and Simbolism in the Play ‘Hamlet’ ”
Get custom paper
NEW! smart matching with writer

Ophelia’s death becomes a modest microcosm of the male world’s banishment of the female, as a “woman” represents everything denied by rational men. The aim of this paper is to complement the microcosm of HydrOphelia, whilst exploring the “flower too soon faded” and all elements that bear semblance to her due to their glossed over nature.

Do brooks lined with willows exist in close proximity to the sea? Negative.

This implies that the distracted Ophelia wandered many steps away from Elsinore in a relatively short space of time. Claudius had commanded that “divided from herself” like the “mere beats” [IV, 5] Ophelia be closely followed and given good watch, and considering the Queen’s account, Claudius has been obeyed by his wife. The case of Ophelia is convoluted since she does not paint her own picture, but rather has it painted “for her” by Gertrude, appearing both as the goddess of nature and a tainted version of the same.

In “Representations of Ophelia” (1994), the willow is itself an emblem described as “A sad tree, whereof such who have lost their love make their mourning garlands.” The scene is allegorically augmented by personification: the branch Ophelia climbs is “envious” and the brook into which she descends is “weeping.” Influenced by this, Hydrophelia consists of objects with a mind of their own.

Ophelia as a nymph-like creature

Through her madness, Ophelia carries garlands not of beautiful and valuable flowers, but rather negligible weeds and grass that gets towed and discarded like crow-flowers, nettles, and long purples [IV, 7] – much like the carrier herself. Perhaps her situation was improved at a time, although now she represents plants that serve merely as inbetweeners to blossoming flowers. The audience describes an alive Ophelia with the aid of flower and tree imagery, and subsequent to her passing, water imagery. A weeping willow suspends itself bleakly over water, and eventually its leaves and branches wither and die, dropping into the brook beneath. Imbibing solitude and nostalgia, likewise the willow, Ophelia finally rests lifeless in her bed at the bottom of the muddy brook.

Floating through western art, Ophelia is one of the most frequently illustrated of Shakespeare’s heroines despite the former’s neglection in the realm of criticism. Neither Gertrude nor Ophelia ever technically leave Denmark. Nevertheless, both women narrate different tales of cosmology: land (Gertrude who witnesses Ophelia’s death from land) and water (Ophelia’s consumption by water). Gertrude chooses to “witness” Ophelia’s death not simply as a desperate suicide, but also as a situation in which a young woman simultaneously sinks to find a home in the waters that surround her. Ophelia is like a water-nymph or mermaid: “like a creature native and indued unto that element” [IV, 7]. There is a sense of harmony between the humanized landscape and the image of Ophelia as a nymph-like creature who is at home in the water. Analogous to the divided “mere beast” that Claudius claims Ophelia to be, Gertrude transforms her into a mere-maid. Additionally, Gertrude’s account offers the readers a map and a scene due to the supplemental charting of landscape and ecology where Ophelia’s character ceases to exist and not just the accounting of the death of a character.

Between the 15th and late 19th century, the idea of landscape emerged to denote the literary and artistic rendering of the tangible world, i.e., the scenery (literally that which is seen) which is viewed by a spectator. It indicated a sensibility and way of expressing feelings towards the external world comprised of natural and man-made spheres articulated through human relationship. Such a sensibility was closely linked to an arising of dependency on sight as the medium through which truth was to be acquired: “seeing is believing.”

Like the water-nymph, Ophelia is exactly where she should be. Ephemerally, perhaps, it is plausible to conceive an alternate identity for her, wherein, perchance she is not dying at all. Thus, Gertrude’s report may be participating in a profound act of witnessing, recording, and mapping the world around her. Technically, even though Gertrude never leaves Denmark’s dry earth and Ophelia does not drown in the sea, the former answers Laertes’ question, “Drowned? Oh, where?” [IV, 7] about “where” [IV, 7] his sibling sank, consequently casting Ophelia as a voyager, with Gertrude assuming the position of prime witness, recorder, and cartographer to Ophelia’s voyage. Literature of the seas was avant-garde in the 16th century and although this practice was non-existent at the time of Hamlet, Gertrude partakes in a tradition of travel writing. Moreover, she offers the only account of Ophelia’s “journey.” As a queen regnant, Gertrude reads, writes, and illustrates the death of a young woman – a drowning maiden, and a creature of mystery – reproduced by many artists in the centuries to come.

“But the fact that his eyes were closed made the murder possible.” The King could “close” his eyes and shut off his sense of sight, but his ears were still functioning, and the poison made its way through there. In “Hamlet: The Dialectic Between Eye and Ear,” (1991) the author devises a relationship between the eye and ear how one sense’s potential is unattainable without the other.

Pertaining Hamlet: Following the ghost scene in the opening, Hamlet contemplates to act by means of the sword, but his intent is blurred by language. Hamlet asks his friends, soldiers, and scholars to “swear” on his “sword”, and not on “faith” as they are prone to propel [I, 5]. “Swear” is an act of language, whereas “Sword” [I, 5] is a combination of “word” and an object of action. Combined, they represent the conjunction of language and action, or word and deed, which gradually becomes Hamlet’s word-sword method of action.

Ophelia giving out flowers to everyone represents a different kind of “deflowering”. Laertes and Polonius always attempted to be in control of her virginity. However, Ophelia is taking back control of this “deflowering” by giving out flowers, multiple ones to express her frustration. She is being deflowered multiple times here, even though a person may only be deflowered once. Some of the flowers are connected to notions of fertility control and abortion. For example, two of the flowers Ophelia gives out, rue and fennel, were used to create a medicine that was said to be so strong that “it will cause the child to descend if used often.” Rue, which Ophelia gives to Queen Gertrude and also keeps for herself, was well-known for suppressing sexual desire. These ideas of fertility regulation and suppression of sexual desire tie very well with Laertes and Polonius’ obsession with Ophelia’s virginity. Ophelia giving them fertility regulating flowers signifies her attempt to take back control or at least symbolically turn the tables back on her very societal superiors. Additionally, she gives Laertes a taste of his own medicine by giving him a flower known for fertility regulation. In this floral context, two species seemed more fascinating than the rest: the daisies and the rue.

“There’s a daisy” [IV, 5], and in Christianity, daisies are believed to indicate the trail that the wise men followed, searching for a sign of the newborn Christ in Bethlehem. Another legend has it that the daisy emerged from the tears of Virgin Mary. The flowers are also used to represent Virgin Mary and Christ as a motif in medieval artwork. Thus, one can deduce that it was completely rational of Ophelia to simply state ‘there it is,’ as if analogous to the traditional Bethlehem story, the daisy was symbolic of guidance from the perspective of Ophelia. Also, the daisy symbolizes innocence and gentleness. She picks up the daisy and sets it back down without handing it to anyone, causing us to assume that the Danish court has no place for innocence anymore.

“There’s rue for you, and here’s some for me,” [IV, 5] and this brings up the question of mortality – of life and death – that can be associated with Hamlet holding a skull. Likewise, Ophelia is holding the rue. In her own silent manner, Ophelia is mirroring Hamlet’s dilemma of life and death. Ultimately, she makes a decision – death by drowning/suicide – quicker than Hamlet, even though both exhibit madness.

Interestingly, the similarities among all these plants is the phenomenon that each flower is primarily an object before anything else. With a short life lifespan, and through methods such as seeding and germination, they are blessed with life by preexisting organisms, whilst their evolution depends on the environment they prosper in. Drawing on the transient nature of nature, there exists a similarity between flower and human beings – both are privy to death, and both can be shaped by the atmosphere that they occupy. Just as the audience drew these conclusions, Ophelia too in her ‘madness’ compares the life of the individuals surrounding her to those of the flowers.

Breaking through the cruel realities of patriarchal manipulation, Ophelia utilizes madness to survive the oppressions of paternal refrain and publicly displays in her verses what she is meant to suppress. Despite being a minor character in Hamlet, Ophelia’s tangent from sanity and consequently her death evokes the pathos with the Elizabethan audience. Imbibing much more than the frightened and compliant personas, conflicted between restrained sanity and liberated madness, Ophelia finally adopts madness to declare her being, tragically leading to her self-driven self-destruction. As her floral innocence slowly disintegrates – and her body inevitably returns to nature – she immerses herself in placid waters like a fading flower where she embraces death and “the rest is silence” [V, 2].

Ophelia and Simbolism in the Play 'Hamlet'. (2019, Dec 01). Retrieved from http://studymoose.com/ophelia-and-simbolism-in-the-play-hamlet-essay 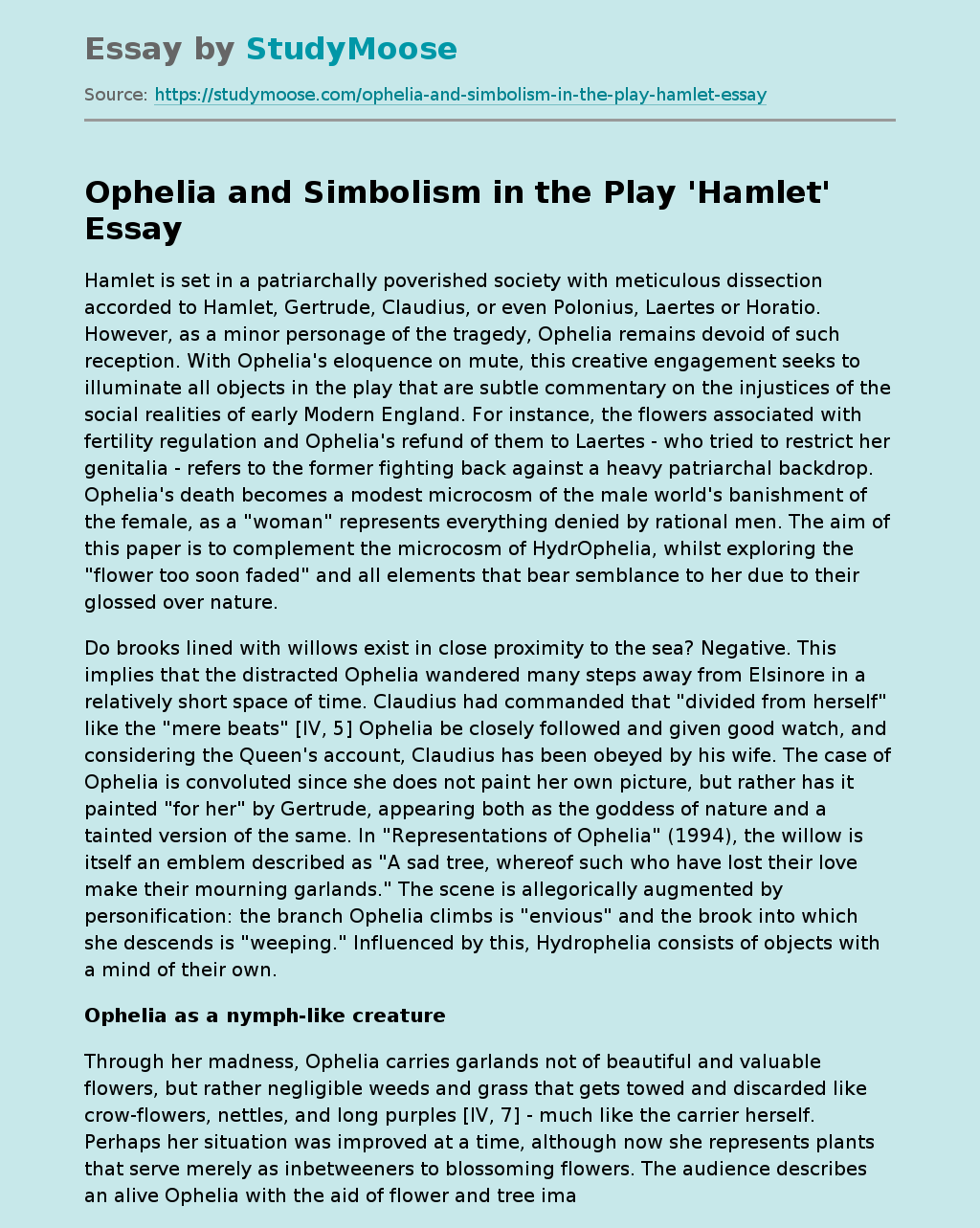