Hamlet and Ophelia have a relationship that is quite significant to Hamlet as a whole. Their relationship in the past has been filled with many sexual endeavors but once the play starts, it begins its downfall, affecting multiple characters down the line. Throughout the play, the relationship indirectly causes obsession, death, insanity, and the drive for vengeance.

Ophelia’s love for Hamlet is mentioned very early in the play when she is with her brother, Laertes, and her father, Polonius. The brother warns her to be careful since Hamlet’s motive to be with her are not out of love, but is “a violet in the youth of primy nature, forward, not permanent, sweet, not lasting, the perfume and suppliance of a minute,” meaning that the relationship is merely a stage of youthful lust and will not last forever (1.

Don't use plagiarized sources. Get your custom essay on
“ Hamlet/Ophelia Relationship ”
Get custom paper
NEW! smart matching with writer

2 8-10). Unlike Laertes, Polonius demands that she must stop dating Hamlet at once.

He cares about his own reputation more than the emotions of his daughter, and he also wants to have the most power over her.

If she and Hamlet were to wed, he would lose the power he has over her, which is unacceptable in his eyes. After Ophelia obeys her father, Hamlet appears at her room in a complete mess. The state that he is in frightens her, and mentions what happens to her father. Polonius assumes that Ophelia’s rejection has driven Hamlet insane. This is the beginning of Polonius obsession to discover if Hamlet is really insane due to his daughters rejection, or if it due to a different cause.

The obsession that Polonius continues to have for the discover of the source of Hamlet’s insanity drives him to his death, which further induces Ophelia’s drowning. Being extremely nosy, he once again hides to eavesdrop on Hamlet’s conversation, this time with Hamlet’s mother in the queen’s chamber. After Gertrude feels threatened by Hamlet’s aggression and screams, Polonius makes a sound behind the curtain, in turn shocking Hamlet. Then Hamlet yells, “How now, a rat? Dead for ducat, dead” and stabs Polonius through the curtains, killing him (3.4 29).

Polonius just had to force Ophelia to reject Hamlet. His obsession with their relationship causes his own death. His death is well deserved. Unfortunately, his death drives Ophelia insane. She loses the love of her life, her brother is far away in Paris so she has no one to go to anymore, and now her father perishes. Being driven over the edge, she does not notice that falls into a large pool of water, and before long, “her garments, heavy with their drink, pulled the poor wretch from her melodious lay to muddy death” (4.7 206-208).

The significance of Ophelia and Hamlet’s relationship is all tied together by Laertes’s mark for vengeance. Act V i. is the first scene since Polonius’s death that the two characters are in each other’s presence. Overcome with grief, Hamlet cries, ” I loved Ophelia: forty thousand brothers could not, with all their quantity of love make up my sum” (5.1.270-72). When he sees Laertes in the grave, he becomes jealous and angry, so they wrestle. Laertes was not prepared to kill Hamlet there and then, but it is hinted that he will do so in the next scene. Hamlet’s relationship may indirectly lead up to his death.

Hamlet’s and Ophelia’s feelings for each other stay strong throughout the whole play, even though they may be clouded. Their love is still strong when Ophelia rejects him and when he basically calls her a whore, they just couldn’t show it. The play was strongly influenced by their relationship since it affected so many characters. It may even end the life of dear Hamlet. 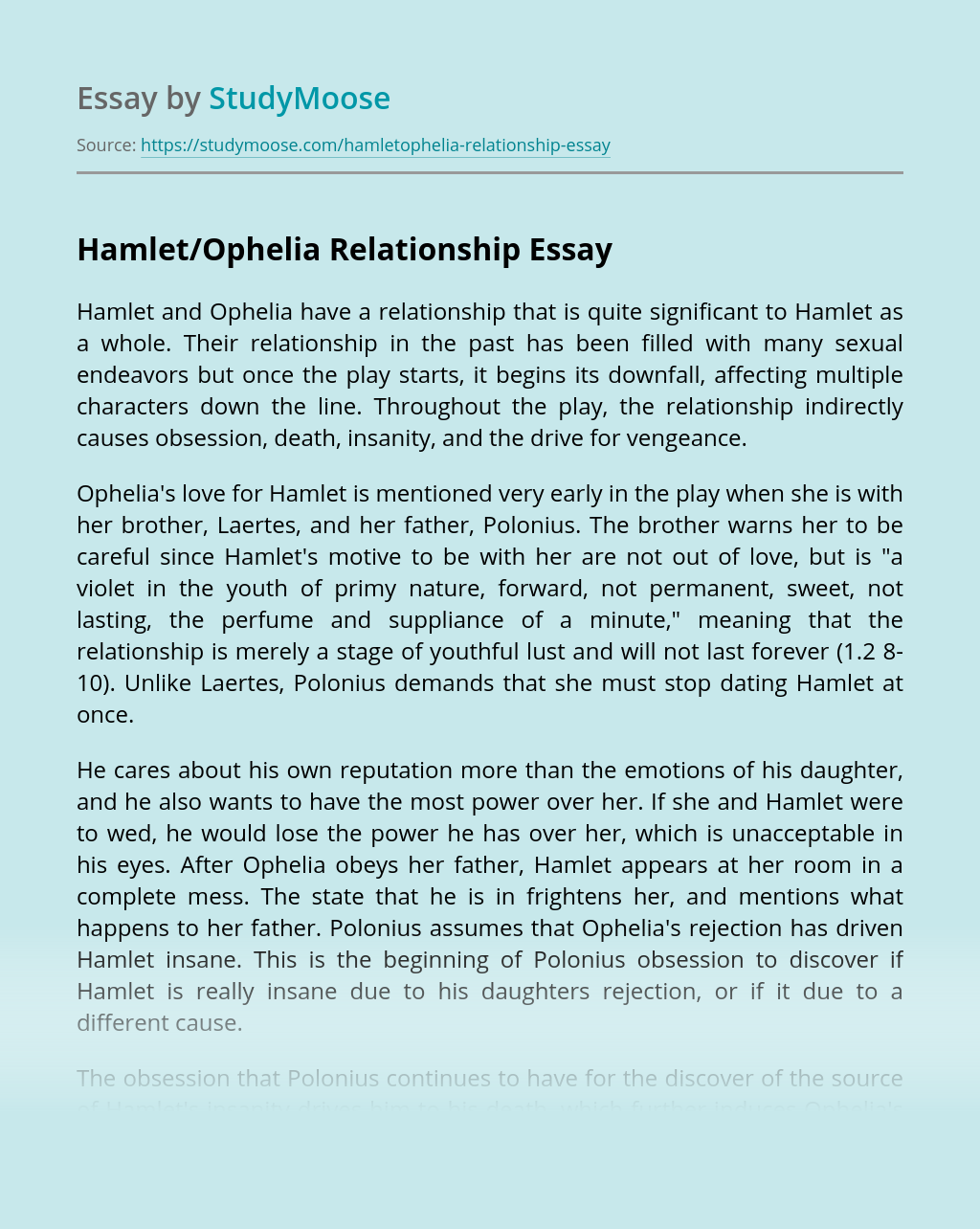