Are Gertrude and Ophelia merely pawns in the world of Hamlet?

‘Are Gertrude and Ophelia merely pawns in the world of Hamlet? Explore the plays representation of femininity, paying close attention to the role and function of each of these two characters in the play’. William Shakespeare’s ‘Hamlet’ can be seen as a chess game bought to life. The play depicts the events in a 16th century Danish royal family that unfold after a suspicious murder of the king. The plays two female characters Gertrude and Ophelia can be likened to pawns in this intricate web of lies and deceit, as their words and actions are dictated by the males of the play.

Don't use plagiarized sources. Get your custom essay on
“ Are Gertrude and Ophelia merely pawns in the world of Hamlet? ”
Get custom paper
NEW! smart matching with writer

This can be directly linked to the broader cultural

understandings of gender roles in 16th century England, as women were portrayed as passive, weak and submissive to the males power strength aggression and action . As all texts position readers to interpret different characters in different ways, this text to can be read as empowering the females, by appearing to be submissive, in order to manipulate the men.

However, as essentially Gertrude acts as a vehicle for Hamlets emotions, and Ophelia is primarily shaped to conform to external demands to reflect the male characters desires, the role of the women in Hamlet is primarily that of a

manipulated pawn in a chess game that not even the kings can win. The play ‘Hamlet’ begins with the funeral of the former king of Denmark, that is simultaneously the wedding celebrations of the new king Claudius and his bride Gertrude, the young Hamlet’s mother and former King’s wife.

Hamlet’s suspicions that “something is rotten in the state of Denmark” are later confirmed by the ghost of his father, who reveals Claudius killed him, in a bid to gain power and his wife, Gertrude. Hamlet then decides that he must get revenge on Claudius and so pretends to be mad, fooling his mother, lover Ophelia and Claudius.

However, due to Hamlet’s procrastination, events take a turn for the worse as the end of the play brings about death to every main character through error of judgment. Gender roles in the play Hhamlet are a major factor dictating the lives of the females Ophelia and Gertrude. As strong masculinity was cherished, female traits were not desirable in a man, and this explains the actions of Hamlet, who acts in the realm of feminine for the first 4 acts. His fathers death bought about this loss of masculinity and Claudius further strips him of this honor by saying, “of impious stubbornness.

Tis unmanly grief. ” (Act 1 sc. 2, 94 ) thus Hamlet is left vulnerable and passive. He recognizes this in his second soliloquy, ‘Oh what a rogue and peasant slave am I,” and he shows his disgust at his feminine characteristics by loudly disapproving of Gertrude and Ophelia’s blatant sexuality. This is best shown as he shouts at his lover Ophelia, “get thee to a nunnery,” to preserve her purity and voice his disgust. Hamlet’s change of feeling towards Ophelia is a direct result of his dissatisfaction with his own short comings, and Ophelia has no choice but to conform to this change of attitude unquestionably.

Therefore Ophelia through no fault of her own is faced with the fact she has lost her lover, but also her respectability, as it is well known she was not the innocent doyenne she is initially presumed to be, she is in the doghouse so to speak. Ophelia’s actions in the first part of the play are determined by her brother Laertes and father Polonious to great extent, as they warn her to stave off Hamlet’s advances.

She states to her father, in response ‘my lord he hath importuned me with love in an honorable fashion,”(act 1 sc. 3)in such a way that would indicate she believes he genuinely loves her. Yet as he further challenges she submits without fight, “my lord I shall obey”(act 1 sc. 3) and is forced into an informant role.

This lack of strength of character is in keeping with typical gender roles of the era, and is further evidence that whilst Ophelia feels differently, she is perfectly willing to go along with whatever the male figures in her life decide for her. As the play progresses we as readers gain the full force of the dependence Ophelia has on these characters, as their absence and later killing, drives

her into the madness from which she never recovers. This culminates in her untimely suicidal death that sums up the purpose her role had in the play, to merely conform to the males desires and needs. She is Laertes ‘angel’, Polonious’s ‘commodity’ and Hamlets ‘spectre of his psychic fears’ . Ophelia could be called an unstereotypical female in the play, because she does not play the innocent virgin role, and she goes mad after the death of her father instead of quietly accepting it.

However this more strongly reflects the weaknesses of her character ,the absence of her inner strength and reveals that she is too easily overcome by emotion, traits that are more prominently associated with females, especially in the 16th century. Thus Ophelia is dominated by the males in the play, due to her weaknesses that lead to her demise, much like a pawn on a chess board.

Gertrude’s role in the play of ‘Hamlet’ is controversial, considering firstly her position of power, that she has continued to hold despite her late husbands death, as queen of Denmark. One would assume that Shakespeare, by placing Gertrude in this highly respected role is empowering her and her authority, therefore moving against broader cultural assumptions of femininity.

This is certainly a possibility, given the lengths Claudius went to in order to satiate his lustful desires, as with the romanticized story Helene of Troy. That Claudius the new King would desire Gertrude as his wife, although she had already been married, had a son and was middle aged puts Gertrude in yet another position of power, but did this empower her? After all, it is certain Claudius’s main ambition was to gain the throne from his brother and so his marrying Gertrude provided, perhaps not love, but for an easy transition that would not bring about much controversy. Either way, as with Ophelia she does not take advantage of this power and is entirely submissive to Claudius.

This is primarily because she allows herself to be manipulated. She is aware of the approved role of women and ascertains to it, as she states when watching the character reflective of herself in Hamlet’s play, ‘The lady protests to much, methinks’,(act 3, sc. 2, 226) Claudius effectively uses her throughout the play, most notably when he arranges with her agreement, for Polonious to spy on a conversation she has with Hamlet.

This betrayal of trust to the son she loves demonstrates how easily she is led astray by persuasive men like Claudius and it is a serious weakness in her character. Essentially her role consists of a pawn, not a queen, passed between two kings who dominate her and her actions. This weakness translates to her relations with her son Hamlet, upon whom she dotes, and this is noticed by Claudius, ‘The queen his mother lives almost by his looks. ‘(Act 4,Sc. 7,11-12)

That the norm of parental roles have almost been reversed, with Gertrude looking up to her son and idolising him, whilst Hamlet looks down upon her gives him a superior position, from which he directs her actions. This happens most noticeably in the closet scene with Gertrude, as Hamlet shames his mother into helping him to convince Claudius further, that he is in fact mad, despite the fact prior, she conspired with Claudius over Hamlet.

Thus, this proves that she did not intentionally want to hurt Hamlet by conspiring with the king to spy on him, in the previous scene, but that she is so willing to be led that she will follow the directions of whichever male instructs her. This closet scene also gives rise to the climax of Hamlet’s rage, but in this intense emotional scene, we as readers are given no indication as to Gertrude’s feeling.

It is in fact because her character is so negative, insignificant and undeveloped that she arouses in Hamlet the feelings that she is incapable of representing. This translates to her primary role being that of a vehicle for Hamlet’s emotions-thus she is again manipulated and used as a pawn for Hamlet’s emotional state. Not only this, but Gertrude can also be seen as the reason, at least for Hamlet, for the tragedy. Gertrude’s guilt and Hamlet’s disgust at her, had to be maintained and emphasised in order to supply a physiological solution for Hamlets actions.

As Hamlet shamelessly uses his mother to prove he is mad, to show his emotions and provide a reason for his anger it gives rise to the question, who the real villain is in Hamlet. Gertrude and Ophelia, whilst looked down upon throughout the play for being blatantly sexual and susceptible to her passions and are thus blamed by Hamlet, are merely acting the role of pawns in a chess game, manipulated by the males. Each female appear only to fulfill the role of reflecting the males desires as is in keeping with the representations of femininity by Shakespeare.

Whilst readers may emerge initially from a reading of Hamlet with the impression that Hamlet is the misunderstood hero, with Ophelia and Gertrude playing the interfering adulterous ‘ugly stepsister’ role, another reading is possible. That, through no fault of their own, the female’s submissive roles in fact corrupted the males to such an extent that they, even Hamlet became obsessed with the idea of power. So, although the females were manipulated by the males, it caused the opposite effect by empowering them, as they ended up as the reason for the males actions.

In conclusion, though controversial, it is evident that due to the role and function of the females in the play, Gertrude and Ophelia were used by the males to such a point, that although the end result would suggest otherwise, their role consisted of nothing more than pawns in a chessgame.

Are Gertrude and Ophelia merely pawns in the world of Hamlet?. (2017, Jul 28). Retrieved from http://studymoose.com/are-gertrude-and-ophelia-merely-pawns-in-the-world-of-hamlet-essay 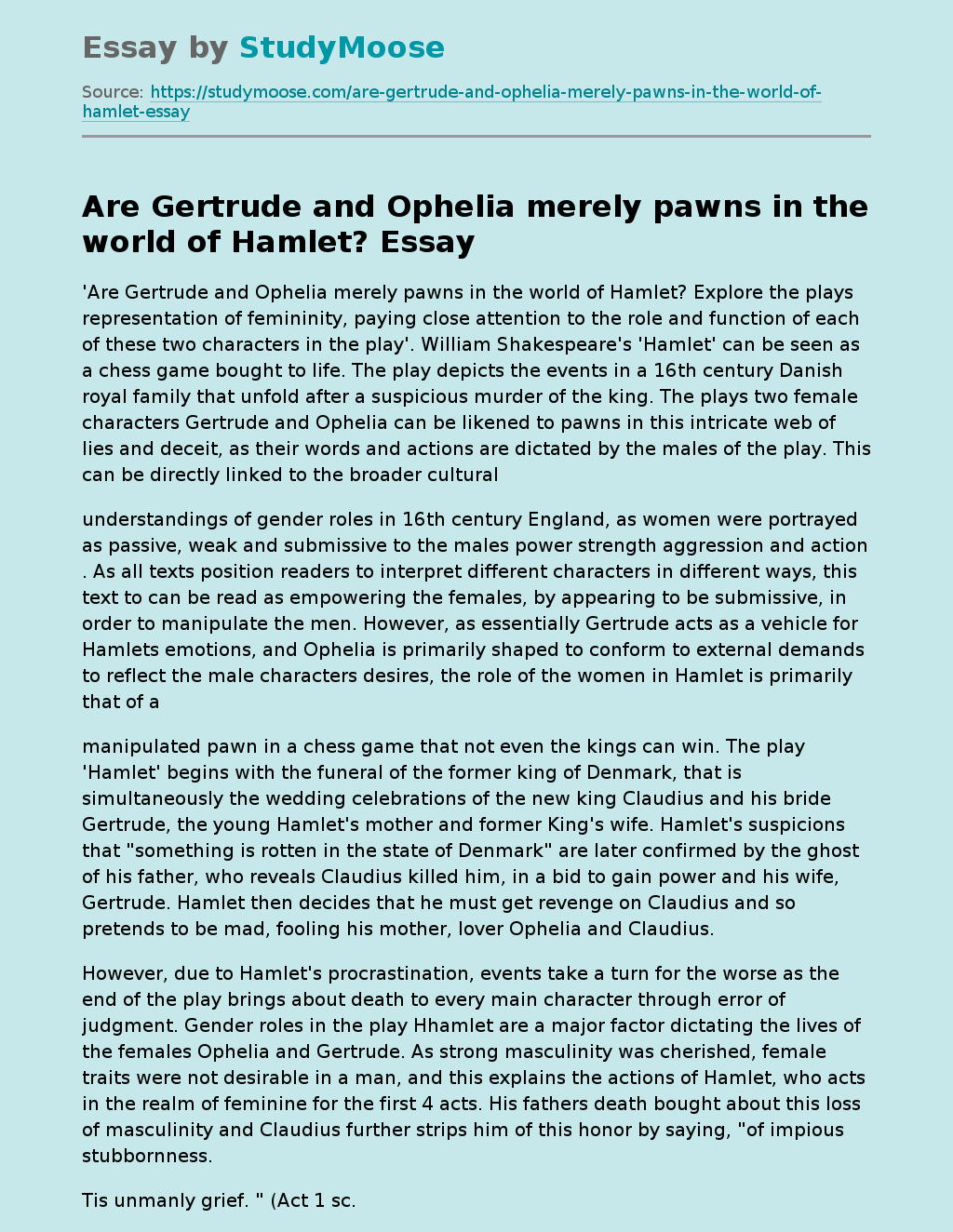