Hamlet's relationship with his mother Gertrude

When Gertrude in ‘the Closet Scene’ faces Hamlet, we get a greater understanding of Hamlet’s emotional state. His mindset and emotional state vary throughout the scene from bitter hostility towards his mother and step father, to timid fear of the Ghost in the light of his inaction, and finally to intimate resolve and benevolence as he advises his mother on how to aid his situation and her own. Hamlet, depicted as “The glass of Fashion and mould of form”, is expected of polite forms of chivalry and temperate speech.

Don't use plagiarized sources. Get your custom essay on
“ Hamlet’s relationship with his mother Gertrude ”
Get custom paper
NEW! smart matching with writer

But, on the contrary, he is strikingly coarse, even brutal in his talk with his mother, and goes on with unnecessary details of her sin. Indeed, he makes more of this than his father’s murder. So disgusted is he, by the picture of her sexual relations with the “bloat king” and his “reechy kisses” pressed on her in the “rank of sweat of an enseam’d bed”. As Mr. Ivory Brown states, “it is surely plain that Hamlet (Shakespeare) has some special woman in mind, a wanton, with special tricks of speech and habit of using mocking names, and with a tendency to some kind of fidgety or skipping gait.

” Even while Gertrude is probably hysterical or saddened Hamlet continues to chide her whilst she is at her lowest and most vulnerable point, “Honeying and making love, Over the nasty sty,” Hamlet sees his mother as a disgustingly sensual creature, driven by carnal needs. He seems to forget that she is his mother, who has given birth to him, raised him, and showered him with love.

And she deserves a certain degree of respect from her son. However, despite everything, Hamlet’s emotional struggles with Human Nature and his shattered illusions, he has not lost love for either of his parents, as reflected in the goals of this scene.

When the ghost reappears, Hamlet treats it with respect and humble submission. But, even though he loves his mother, in his heart, he has no respect for her. As he states, “I must be cruel only to be kind”. His strong words help express his own feelings of rage, and in addition, help Gertrude realize her sin and lead her towards repentance. After his periods of bitterness, anger and fear he realizes that she finally understands his message about her actions, Claudius, and his own assumed madness.

His tone then changes from one of bitterness and rage to one of almost priestly counsel as he explains to her how to remedy the situation. Gertrude is described as a frail character, which lacks feeling. She is of an insensitive nature, not likely to be troubled by guilt. A placid nature, even stolid, she cannot rise high. Like Hamlet, despite her sin, Gertrude reveals that she still loves Hamlet, even if she makes no indication as to whether she still loves the Late King or Claudius. Even though she offers no defense of Claudius, for Hamlet’s accusations of regicide.

And nowhere dos she affirm Hamlet’s admiration and love for his father. But she does love Hamlet and shows her love though her actions. As Claudius states, ” The queen, his mother, lives by his looks”. She addresses him in affectionate terms, even in moments in the scene, which bring her pain, shame and confusion. These include calling him “Sweet Hamlet” and “gentle son”. She echoes these terms in the last scene of the play, when, rather than any addresses to either husband, in her dying words, she cries “Oh my dear Hamlet!

” This implies that Hamlet is more important to her than either of her husbands, or anyone else in the court. Hamlet is probably the only person she truly loves. The actions of Claudius and Gertrude showed Hamlet a darker, more lustful animalistic side of nature, particularly in his mother, who longs for Claudius, “as if increase of appetite had grown by what it fed on”. This shatters his illusion of inherent goodness and virtue of mankind. If his own mother is corrupted by sin and lust, the how can anything or anyone in the world be truly virtuous?

This disillusionment, anger and disappointment continue through most of the play, and appear in this portion in Hamlet’s scathing tirades against Queen. In one, he speaks to hell itself, yelling, “If thou canst mutine in a matrons bones, To a flaming youth let virtue be as wax, and melt in her own fire. ” If sin can corrupt an older, wiser, calmer person such as the Queen, the virtue has no value in the world, and society can plunge into chaos. Hamlet exclaims, “Frailty thy name is woman! ” Hamlet’s problem is supposed to be his feelings of disgust towards his mother.

Thus the actions of his mother have lead him to believe that all women are capable of acting in this wicked way. Women, the frail members, provoke lust and feed it and Shakespeare looks for these indications, and denounces them. His inability to have a successful relationship with Ophelia is a result of this belief. He treats Ophelia with little respect, and subjects her to loathsome verbal abuse, bursting with sexual innuendo, as even in the mousetrap scene he twists everything Ophelia says, to make it sound vulgar, as he states, “That’s a fair thought to lie between a maids legs”.

Hamlet’s mind is crowded with feelings of betrayal, disappointment and distrust. He ruins his relationship with the beautiful, sweet natured Ophelia due to his suspicion and distrust in the fairer sex. And Hamlet probably only realizes Ophelia’s virtue and good nature after her death, when he realizes that Ophelia had been faithful to him, and had truly loved him, so much so that she couldn’t bear his negative attitude towards her and grieved to the point, where she became mad, and then died. Uncertainty and conflict are two of the major themes of Hamlet, and both play an important role in this scene.

The themes of uncertainty and appearance versus reality also appear in several inter-character relationships. The relationship between Hamlet and Gertrude is a good example. Their entire relationship is highly controversial, and there is not one explanation that proves their relationship natural or simple. Hamlet’s madness is also a good example of this. Hamlet pretends to be mad, but is not quite so, but still towards the end, even we are confused whether Hamlet’s feigned madness is actually settling in. Shakespeare fills the play with imagery of sight and blindness.

Shakespeare uses this motif to see how clearly the characters can see the truth about themselves and others. Blindness to one’s heart, motives and sins leads one to excuse sins and continue in them, as Gertrude does. Her lust has blinded her to the sinful nature of her incestuous marriage to Claudius. Also we see that everyone else in the kingdom is blind to the incestuous nature of Gertrude’s marriage. This leads Hamlet to believe that he is alone in a nasty, immoral world. Where people are blind to sins as immoral as incest.

Thus the Theme of Morality is major concern of Hamlet himself, as he wants those around him to feel just as strongly about the issue. His morality is largely responsible for the lack of action regarding the change of revenge on Claudius. His conscience does not permit him to kill Claudius without being sure that Claudius is responsible for King Hamlet’s regicide. So he waits to kill Claudius only after he is sure Claudius is guilty, after the play-within-the-play. Shakespeare also employs several motifs to enrich the theme of morality.

One of these is sickness and disease. He compares Gertrude’s sin to a disease or ulcer, which will subtly rot her soul if she ignores it. As he says “will but skin and film the ulcerous place, While ranks corruption, mining all within, infects unseen”. A similar motif is the image of the “unweeded garden” in his first soliloquy. Hamlet sees the world, filled with sinful people as an unweeded garden. The connections with Denmark being corrupted and diseased are metaphorical for Gertrude’s relationship with Claudius, incestuous and corrupted.

Hamlet is the most realistic character Shakespeare ever created. His relationship with his mother was extremely natural, in the fact that it experienced certain abnormalities, as in the case of all relationships. Their love for each other is painful, but ultimately helps them grow as people and fulfill their obligations- Hamlet’s duty to avenge his father’s death and Gertrude’s duty to repent and try to protect her son from himself and those around him. Hamlet was merely a man, with motives unknown to him, with secret agendas and internal conflicts that remain unresolved.

Hamlet's relationship with his mother Gertrude. (2017, Jul 29). Retrieved from http://studymoose.com/hamlets-relationship-with-his-mother-gertrude-essay 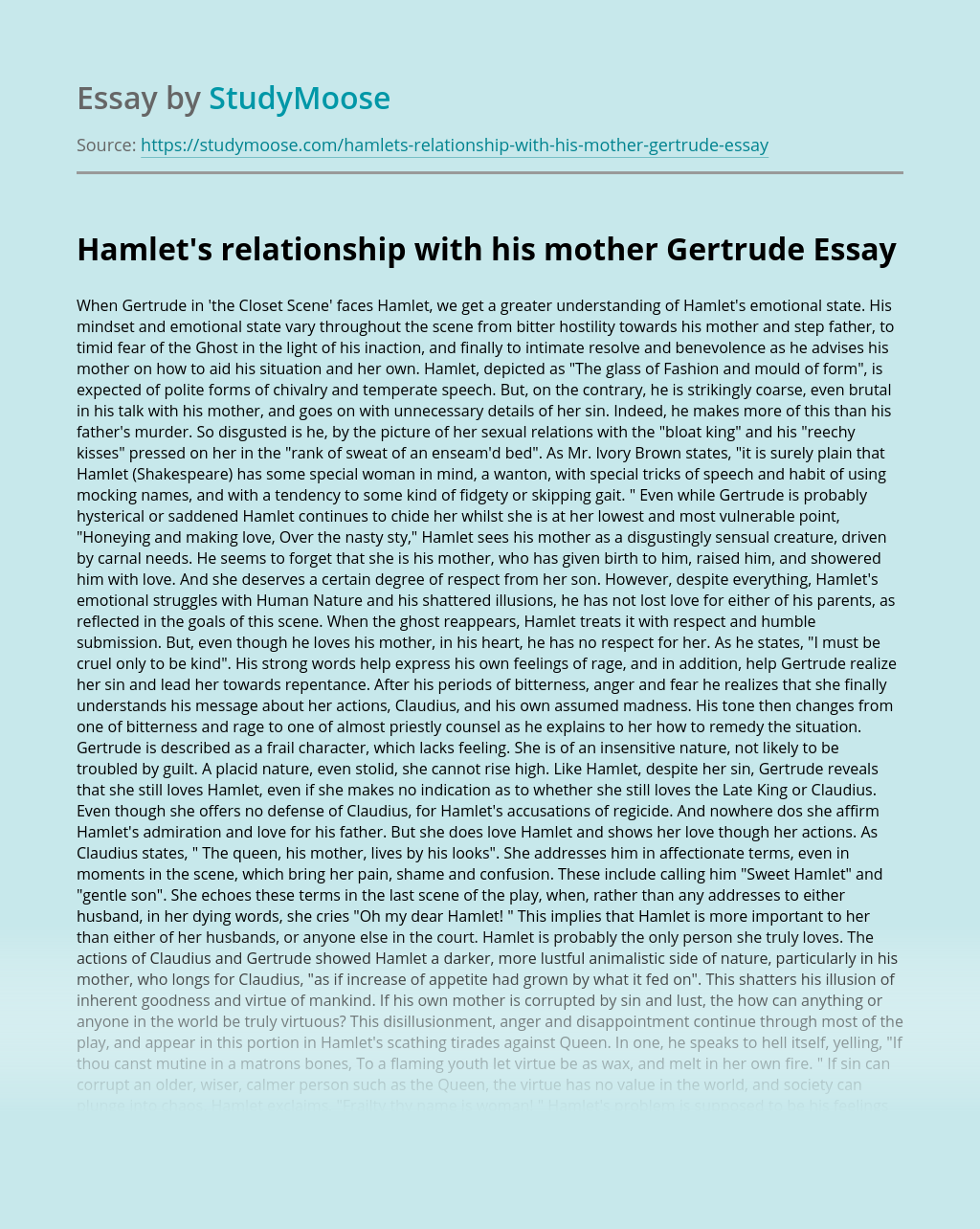