How do you see the presentation of Queen Gertrude in the play? Throughout Hamlet Gertrude can be perceived by the audience in a number of ways with at times it being possible to accept her remarriage to Claudius when at others she appears to be an incestuous traitor. One argument suggests that the queens lawful remarriage to the new king Claudius. One reason for this could be the fact that for modern audiences examining the relationship between Gertrude and Claudius it appears to be lawful in comparison to laws of today.

Don't use plagiarized sources. Get your custom essay on
“ Character Traits of Queen Gertrude ”
Get custom paper
NEW! smart matching with writer

However in Shakespeare’s day the Church of England included marrying a husband’s brother as incestuous. Another reason found not to condemn Gertrude is the simple fact that she is the queen of Denmark and that her actions should be respected as she is head of state. This backed up by the fact that it seems to appear at certain moments that she is not culpable and that Claudius is the one wholly responsible and has “Taken to wife”.

Shakespeare never really communicates Gertrude’s true feelings regarding the marriage so it is easy to feel sympathetic towards her. Despite this it is easy to criticise Gertrude for the short timescale taken to marry Claudius with it being completed with “most wicked speed”. As a result of this she is condemned by Hamlet with him describing her as no better than the pts of society “A beast that wants discourses of reason would have mourned longer”

This shows how passionately Hamlet cares about the death of his father and the events preceding it as this treatment of his mother is something that is a shock to the modern day audience.

Gertrude is also condemned by the ghost of Hamlet who uses sarcasm to express his distaste “my seeming virtuous queen” this disapproval is a natural reaction and one that adds to the audiences opinion that she should be condemned. The views of hamlet and the ghost are biased and so therefore cannot be used in order to make a serious judgement as the whether or not to condemn the queen.

Nonetheless it is Claudius’ comments in which he suggests that she is his ‘sometimes sister’ this is a comment that makes the audience think that the marriage was rushed along by Claudius without really loving Gertrude. Another argument claims that Gertrude is an incestuous traitor and is part of the corruption in Denmark. Both Hamlet and the ghost frequently express their disapproval by referring to Gertrude as incestuous with the ghost referring to her as ‘An incestuous adulterous beast’ these words once again express the former kings’ distaste at Gertrude’s actions.

Hamlet refers to the queen as the “Incestuous pleasure of [Claudius’] bed” these are again strong words from a son towards his mother and show his feelings clearly. On the other hand the Hamlet and the ghost seem to be the only people who seem to find the marriage incestuous. This is partly due to the bias of hamlet which can be put down to the Oedipus complex which is shown by Hamlet’s feelings of desire to eliminate the male figure that is associated with his mother as he has a desire to possess her himself.

Several of Gertrude’s actions such as her statement “as kill a king” show her to be far from the traitor hamlet makes her out to be. Her potential innocence is also shown in her genuine sadness at the death of Ophelia which shows a vulnerable side to the queen and one that makes the audience think twice about condemning her as an incestuous traitor. In contrast to this Gertrude seems to accept her guilt in the closet scene “Thou turn’st mine eyes into my very soul; and there I see such black and grained spots. As will not leave their tinct”.

This scene is one of the key moments in the play as Gertrude seems to accept that she is guilty of the sins accused of her although this is not underlines specifically by Shakespeare leaving an element of doubt in the mind of the audience. At the beginning of the play Gertrude immediately begins to sound like a traitor as she says to Hamlet “Let thine eyes look like a friend on Denmark” this creates another seed of doubt with the audience making them wonder whether or not she is complicit with the death of old Hamlet.

However conflicting with this she does side with hamlet at the end of the closet scene and defends him refusing to accuse him of being ‘Mad in craft’. A final indicator of Gertrude’s innocence is the possibility of the fact that she drunk from the poisoned cup purposely “I will my Lord, I pray you pardon me” this is her only act of disobedience and leaves her final act with the audience wondering whether or not she is loyal to her son or to Claudius.

Overall it appears to the audience throughout the play that Gertrude commits several crimes that are adding to the corruption of the state of Denmark. However as the plot unfolds and Claudius’ grip over her becomes more obvious it seems possible that she is just a pawn who is being manipulated into a “joint empress in this warlike state” suggesting that Claudius’ needs her by his side in order to retain control. Towards the end of the play it becomes apparent to the audience that Gertrude is still loyal to her son and dies for him willingly going against Claudius and showing her true allegiances. 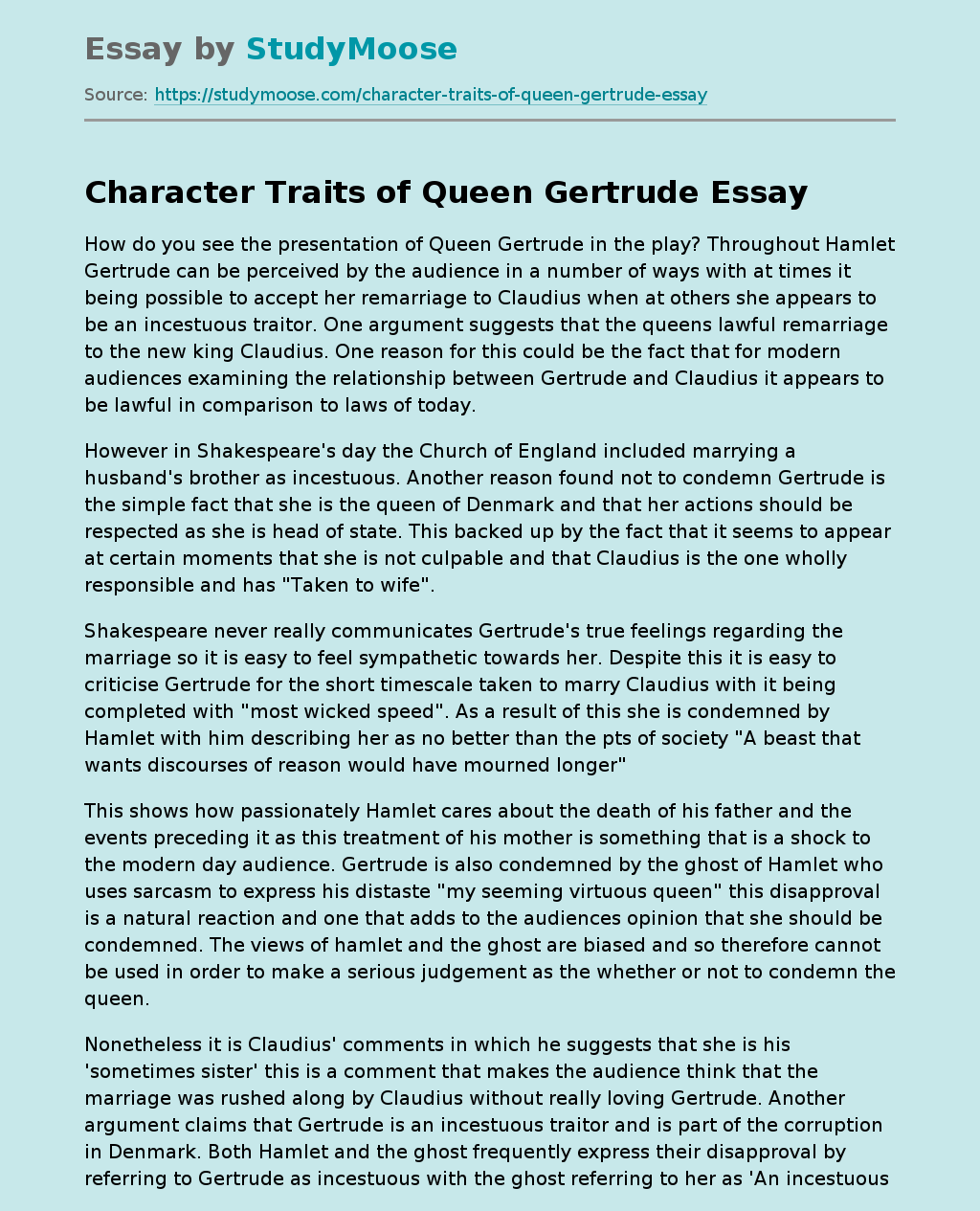