Gertrude's Character in a Play Hamlet

Some critics have seen Gertrude as innocent, others as central to the evil in Hamlet. Using act 3 scene 4 as your starting point, how do you evaluate these views? It is tempting to condemn Gertrude as evil, but it is probably more sensible to consider her as weak and inconstant. But when have tragedy plays ever been sensible? Like many of Shakespeare’s women it is argued that their characters are somewhat “sketched in” rather than drawn in with detail like for example, Hamlet’s.

Don't use plagiarized sources. Get your custom essay on
“ Gertrude’s Character in a Play Hamlet ”
Get custom paper
NEW! smart matching with writer

The way Shakespeare has “sketched in” Gertrude’s character leads an awful lot down to the way she is played on the stage.

An interpretation that I would like to explore is Gertrude as an evil character in the play. There are several significant points that illuminate the evil side to her character.

A lot of people consider Gertrude as frail and weak, highlighted by Hamlet’s heartfelt line. “Frailty, thy name is woman” but there are several tell tale signs to draw her character towards the centrally evil figure in Hamlet. The most obvious being her incestuous marriage to Claudius. Surely she must take into consideration the consequences of her actions and therefore this shows us Gertrude’s ice-cold nature.

Even going as far as wanting to marry to stay in a position of power? Once Gertrude has tasted the lavish life of a queen is it possible that she can go back to not being a royal?

The marriage shows us that she is completely selfish and emotionless. In Victorian times mourning would go on for months possibly even years. The Victorian society was very familiar with death and it was a large part of their culture. Gertrude waited a whole month before announcing her love for Claudius. There are even suggestions that Gertrude was unfaithful to Old Hamlet with Claudius, she was probably quite lonely being married to Hamlet senior, seeing as he was always off at war… who else to warm the royal bed than the charismatic Claudius?

This links her to the death of Claudius and weather she had a hand in it. Looking at the evidence we seriously have to ask, how can Gertrude not know about the details of her husband’s death when so heavily involved with Claudius and the palace? One of her greatest weapons is her power of deceitfulness. In act 3 scene 4 Gertrude supposedly finds out about the murder of Old Hamlet. She seems shocked and flabbergasted about the event but in control of her emotions. In the heated exchanges between the two Gertrude shows Hamlet how supposedly innocent she is and vulnerable to the evil of Claudius.

Hamlet’s tone moves from the bitterly accusatory, “kill a king and marry with his brother”, to the almost apologetic, “I must only be cruel to be kind”. This tool of vulnerability plays on Hamlet’s mixed up emotions and wins him back over to her side. So when she is in a tight situation she can just play the innocent card and Hamlet will take it, due to his love for his mother. Gertrude’s deceitful nature pushes Hamlet into awful emotional turmoil, causing him to commit even acts of murder. Hamlet is notoriously bad dealing with women; his closest relationship with a woman is with Gertrude.

She recognises this weakness and knows she can deceive Hamlet. The reason why Hamlet is acting so irrationally is because his coherent thoughts and actions are being blocked out by this fiery rage ignited by Gertrude. The name Gertrude actually means “spear of strength”, derived from the Germanic elements ger “spear” and brub “strength”. Shakespeare clearly chose this name because Gertrude isn’t an innocent woman, as she likes to portray herself, but a clever powerful woman who is masterful in deceit.

We see the deceitful side to Gertrude’s nature when she allows Polonius to listen in on a private conversation between mother and son. Why doesn’t she just let Hamlet see Polonius? Is it just to avoid confrontation? Or is it because she’s holding something back from Hamlet? Another example of Gertrude’s dishonesty is when she sends Rosencrantz and Guildenstern to spy on Hamlet. This behaviour is clearly not of an honest person. Hamlet sees through the superficial reason for their visit by cleverly questioning them, but why go behind Hamlet’s back so frequently?

Upon looking at the side of the argument for Gertrude being central to the evil in Hamlet I would now like to explore the argument for Gertrude as innocent and not a deceitful, evil character. There is a possibility that Gertrude’s actions after her husband’s death were prompted by self-preservation. A convenient marriage to a known protector would, after all, ensure her safety and that of her beloved son, whom she may have considered too inexperienced and vulnerable to take responsibility of ruling a threatened country. Would these be the actions of a deceitful woman?

It could be interpreted that she is doing what’s best for Hamlet by providing him with stability and a father figure in Claudius. Another point emphasising Gertrude’s innocence in not being a deceiving character is the testimony of the ghost in Act 3 Scene 4. The ghost defends her and tries to persuade Hamlet to go and talk to her “Oh step between her and her fighting sole” The ghost feels no bitterness towards Gertrude but only pities her because she is in such a predicament. The ghost would have better knowledge of Gertrude than anyone else, as he was her husband for many years.

Also he would have greater knowledge about Gertrude being deceitful as he could watch her when she doesn’t even know, for example when the ghost talks to Hamlet, Gertrude can’t see it. The ghost blames solely Claudius and has no doubts that Gertrude is not an evil figure. Gertrude is loyal to Hamlet. She admits to minor deceits but to classed as central to the evil is too extreme for this mixed up character. She makes Hamlet very upset and confused through marrying his uncle but she was never trying to cause Hamlet any harm.

A theory why Hamlet is so enraged and frustrated with his mother is because of his Oedipal tendencies. This makes Hamlets charges less sincere and over dramatised. This pent up emotion about his mother causes Hamlet to sensationalize his actions in the play giving the reader the impression of Gertrude as an evil character. The theory of Hamlet’s Oedipus complex is to be taken seriously: Sigmund Freud believed that Hamlet’s irresolution in avenging his father comes from “the obscure memory that he himself had contemplated the same deed against his father out of passion for his mother. ”

Gertrude upon hearing the news of the Kings murder in Act 3 Scene 4 perceives to be genuinely shocked and astounded by this news. Gertrude is clearly stunned by the news of her dead husbands alleged murder. Could she keep the truth from Hamlet, her own son? Surely Gertrude isn’t evil enough to conspire against her husband and betray her son. Gertrude doesn’t appear to be hiding any important information; the only information she does hold from Hamlet is to protect him. She would find it very hard to hide anything without making it obvious to Hamlet especially with all the emotional turmoil she’s in.

Clearly she’s not trying to deceive anyone and is genuinely astounded by the news of her late husband. Upon looking at Gertrude’s character we must look at the feminist critics point of view. They argue that male criticism over the years has neglected and repressed female experience. Gertrude is at the hands of a male writer and male critics over the years, they too tend to adopt Hamlet’s misogynistic views.

Rebecca Smith [feminist critic] argues that Gertrude has been: “traditionally played as a sensual, deceitful woman…but the traditional depiction of Gertrude is a false one, because what her words and actions actually create is a soft, obedient, dependent, unimaginative woman who is caught at the centre of a struggle between two “mighty opposites”. Upon looking at this secondary criticism it shows us another dimension of argument for Gertrude’s innocence as a character. Gertrude’s character is very equivocal in that she can be interpreted in many ways, and there be strong arguments for both sides.

Gertrude’s character is strongly influenced by her stage portrayal. I think Shakespeare did this intentionally to keep a certain ambiguity about the character. We know so far that Gertrude is capable of deceiving people and being sensual but also she puts up pretence that she is completely innocent and frail. Is Gertrude capable of deceiving Hamlet? Are her intentions with Claudius for her own gain? In conclusion I think that Gertrude isn’t innocent and weak nor is she central to the evil but she is deceiving and illusory in her actions.

Gertrude's Character in a Play Hamlet. (2020, Jun 01). Retrieved from http://studymoose.com/gertrudes-character-in-a-play-hamlet-essay 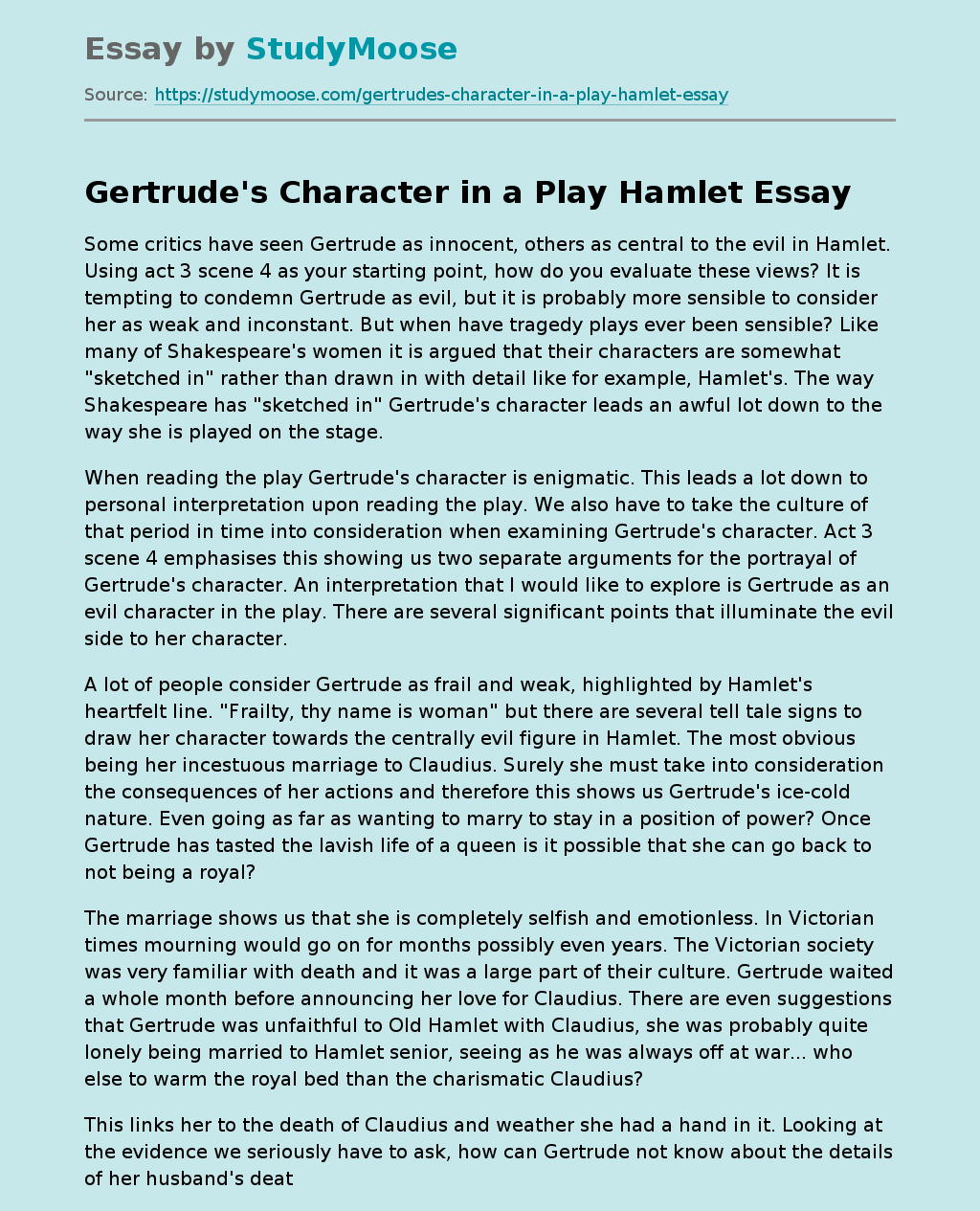