Characterization of Hamlet, Gertrude and Ophelia

Hamlet is a character of extraordinary complexity and depth. No simple formula can serve to solve his mystery. A different Hamlet might have killed his uncle Claudius on the strength of the Ghost’s accusation, ascended the throne, married Ophelia and lived happily ever after . But such a typical hero was not likely to be of interest to Shakespeare. We can also say that in Hamlet Shakespeare presents a murderer and revenger who is both ruthless and reluctant and his death is the ultimate result of his being charged by the Ghost to carry out instructions which were offensive to his moral principles.

Don't use plagiarized sources. Get your custom essay on
“ Characterization of Hamlet, Gertrude and Ophelia ”
Get custom paper
NEW! smart matching with writer

Like other tragic heroes of Shakespeare he is also endowed with exceptional qualities like royal birth, graceful and charming personality among his own countrymen. He has a high intellectual quality as Ophelia observes: O what a noble mind is here overthrown! / The courtier’s, soldier’s, scholar’s eye, tongue, sword, / Th’ expectancy and rose of the fair state ,/ The glass of fashion , and the mould of form ,/ Th’ observed of all observers.

[Act III, Scene I] In spite of possessing all these high qualities which rank him above the other characters the flaw in his character leads to his downfall and makes him a tragic hero.

The tragic flaw in the character of Hamlet is that he thinks too much and feels too much. He is often disturbed by his own nature of ‘self analyses’. What is required of Hamlet is prompt action, whereas he broods over the moral idealism which leads to his delay in action.

When he gets an opportunity to kill Claudius, he puts aside the thought because he cannot strike an enemy while he is at prayer. Several causes account for his inaction . By nature he is prone to think rather than to act.

He is a man of morals and his moral idealism receives a shock when his mother remarries Claudius after his father’s death. Chance too plays an important part in shaping his character. Chance places him in such a position in which he is incapable of doing anything. He becomes inconsistent and is no longer a person who reaches a conclusion only by reasoning. Like other tragic heroes Hamlet too has to face conflict, both internal and external. The internal conflict is between his moral scruples and the act of revenge which he is called upon to perform.

Love of his father, the dishonor of his mother and the villainy of his uncle prompt him to take revenge while his nobility, his moral idealism, his principles and his religion revolt against such a brutal act. The result is that, torn within himself, he suffers mental torture. Hamlets wants to take revenge against Claudius, the murderer of his father, the usurper of his rights to the throne and the seducer of his mother . In Hamlet Shakespeare presents a revenger who is both ruthless and reluctant . As a revenger he must act, on behalf of outraged virtue, to restore a violated order, set right what is ‘out of joint’.

But the act he is impelled to do, involves him in evil of the kind which he would punish. As the ruthless revenger he exemplifies in his own person the evil which is inseparable from the good in human nature; as the reluctant revenger he can symbolize the good’s abhorrence of it. As compared to Fortinbras and Laertes, Hamlet is slow in taking revenge because of his habit of thinking long and deep. Bradley clearly describes this condition and says he suffered from melancholia, a pathological state which may well develop into lunacy. (p. 121)

There is an another aspect of Hamlet’s characterization i. e. his madness. T. S Eliot argues that ‘the madness of Hamlet lay in Shakespeare’s hand; in the earlier play a simple ruse, and to the end, we may presume, understood as a rule by the audience. For Shakespeare it is less than madness and more than feigned. ’ (p. 102) By pretending to be mad, Hamlet kept open the safety valve and could speak order to relieve the pressure on his mind. This is what T. S Eliot means when he uses the words “more than feigned. ” Samuel Johnson (1765) also considers his madness as fabricated even in his (Hamlet’s) treatment of Ophelia.

Johnson says in this regard, ‘He plays the madman most, when he treats Ophelia with so much rudeness, which seems to be useless and wanton cruelty. ’ (Johnson, 1765) Shakespeare’s characterization of Gertrude and Ophelia in Hamlet is paradoxical as it challenges as well as complements the contemporary social traditions and norms. Gertrude is the best example of this paradox that is manifested through her extraordinary supremacy over all the major characters of Hamlet, her influence in the court matters and state affairs and her blind obedience to Claudius.

Ophelia is also active in her domestic domain but her interest are restricted to amorous and matrimonial maters only and they are further directed by his father Polonius and brother Laertes. She is an epitome of traditional feminist expressions of the age that require chastity, compliance and acceptance of male dominancy from women. Ophelia remains passive in the domestic and emotional domain. Ophelia has no identity of her own and all her domestic and amorous matters are directed by her father.

Polonius endeavors to fashion the life and attitude of Ophelia according to his own wishes. He considers his desires as her desires and tries to tailor her approach by various means. Ophelia is further guarded by his brother against any potential threat to her chastity and virginity. At Ophelia’s entry into Hamlet, her brother, Laertes escorts Ophelia advising her on her relationship with Hamlet. So right from the very start, Ophelia is under the sway of Laertes and Polonius. So her character is in complete conformity with the traditional values of that time.

Polonius always responds from a position of authority over Ophelia, emphasizing his power as the decision-maker for her. Both her father and brother have a self assigned task of directing Ophelia how to act properly in every domain of her life. Although Shakespeare has characterized Ophelia as inferior to male characters, but characterization of Gertrude has dual characteristic. Sometime it challenges the traditions of the conformist society and sometime it itself become conforms to the values of the society by acting passively.

Characterization of Hamlet, Gertrude and Ophelia. (2016, Sep 06). Retrieved from https://studymoose.com/characterization-of-hamlet-gertrude-and-ophelia-essay 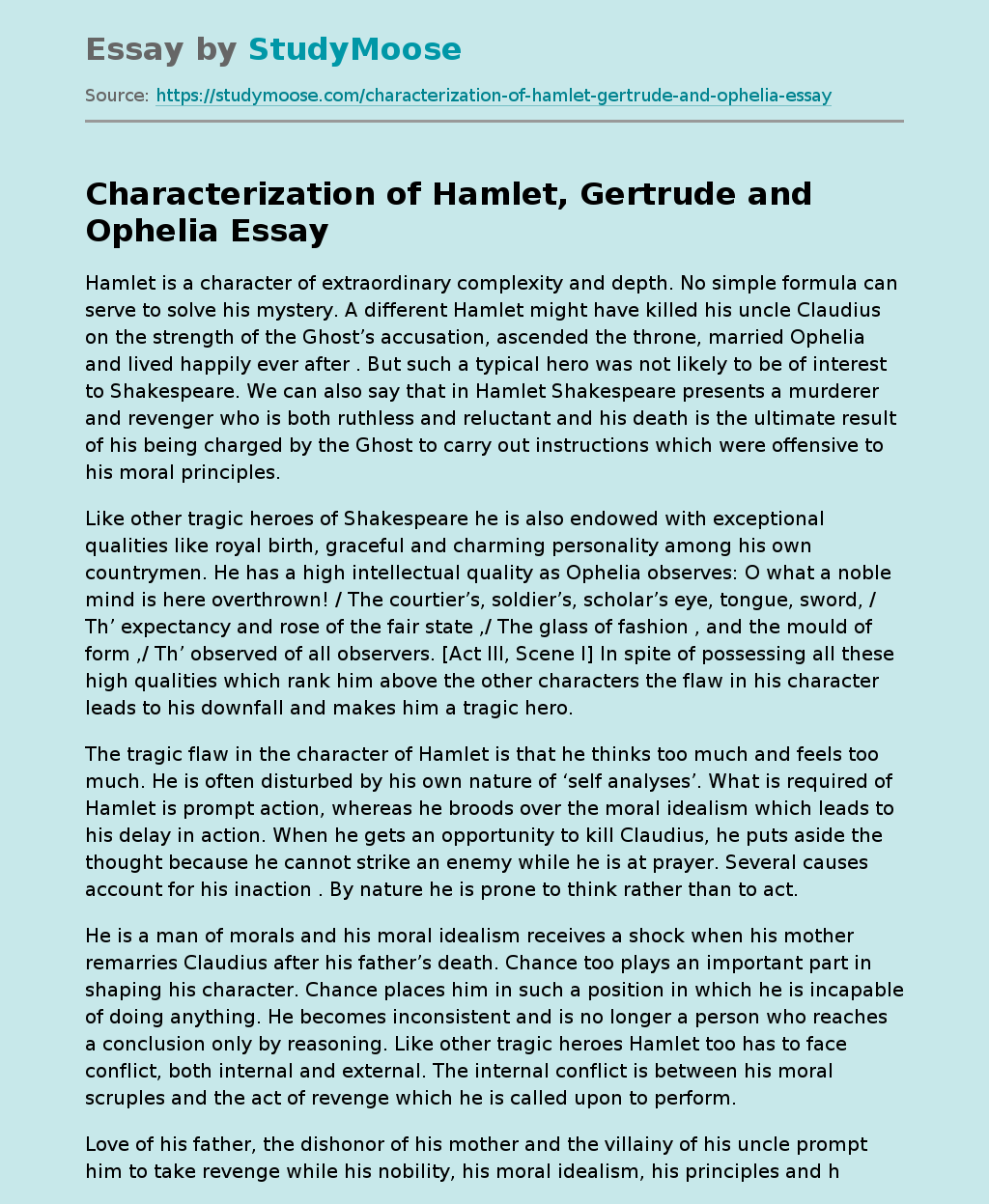