The Ugly Love of Hamlet and Ophelia

In William Shakespeare’s Hamlet, the connections of all characters throughout the entire plot are really complicated. One of the most complex relationships is the relationship between Ophelia and Hamlet. The love between them should be categorized as and an ‘ugly love’ because these two characters never really show their affection to each other clearly, especially with the way Hamlet treats Ophelia. Apparently, Hamlet loves Ophelia, but throughout the play, he also abuses her aggressively because of her betrayal. There are instances that Hamlet show his sincerity towards Ophelia, such as times when he shows up at her trouser, when he vows to her, and when speaks of their love is at her grave.

Don't use plagiarized sources. Get your custom essay on
“ The Ugly Love of Hamlet and Ophelia ”
Get custom paper
NEW! smart matching with writer

However, Ophelia’s father’s disapproval and Hamlet’s gross experience with his mother causes their relationship an unhappy ending. Hamlet is truly in love with Ophelia. Hamlet’s love for Ophelia never changes, even though Ophelia betrays him. As time goes by, Hamlet becomes not expressive with his lover.

He starts to be emotionless and insane to importuned her hope and love for him. Hamlet’s love seems to be shown with bitterness. All of his healthy feelings get weakened and deadened by his melancholy that forces his turning away from Ophelia. In my opinion, Hamlet is truly in love with Ophelia but he always tries to hide his feeling whenever he feels threatened or watched so he gives the opposite message.

One of the main reasons why Hamlet begins to put his love for Ophelia aside and starts to hide his feeling is because Ophelia always obeys her father, Polonius, even when it comes to her own love.

Polonius loves Ophelia and he is protective of her. Ophelia lives by her father’s rules. This indicates a strong bond in the father-daughter relationship. At the beginning of the play, Polonius mentions that he does not approve Ophelia spending time with Hamlet because he thinks his daughter’s unawareness of love could wreck the family’s social reputation and status in the Danish court. When Ophelia discloses that Hamlet has “made many tenders of his affection” to her, Polonius, orders her to stop seeing Hamlet immediately. Even though Ophelia defends her relationship and fights to keep it alive: “He hath importuned me with love In honourable fashion and And hath given countenance to his speech, my lord, With almost all the holy vows of heaven,” she does so with such politeness and respect for her father.

As a good daughter, she finally agrees with Polonius —’I shall obey my Lord’ (1.3.145). Polonius considers his daughter naive and genuinely concerns for her future well-being. That is the reason why Ophelia herself highly respect and loyal to her father. She would sacrifice anything, even her love, for the prince of Denmark to sustain that loyalty. Essentially, Ophelia has no control over life. She could barely make choices. Later, when Polonius uses Ophelia to spy on Hamlet for King Claudius, she blindly follows his instruction (3.1). Apparently, Hamlet figures out that Ophelia is helping her dad to spy on him. He is despaired to accuse her of being a ‘breeder of sinners’ and orders her to a ‘nunnery’ (3.1.131; 132). As a devoted daughter, Ophelia cannot admit what she knows. For such, Hamlet insists that if Ophelia were to marry, she would turn her husband into a ‘monster,’ because she would inevitably cheat on him (3.1.151). Even though he follows up: ‘I loved you not’ adamantly, Hamlet is tortured inside (3.1.129). In the nunnery, Hamlet acts cruelly toward Ophelia because he is aware of their conversation being watched by Polonius and Claudius. The betrayal from Ophelia, the one that he truly loves, is such a great pain to Hamlet. Throughout the entire play, Hamlet expresses his affection to Ophelia in his own way. Hamlet does everything, including sending her to the nunnery because he does not want Ophelia to be involved, in case Claudius decided to get revenge on him. A nunnery, by definition, is a haven where women enter to become nuns. It is a pure and virtuous place. By this, Hamlet’s decision could be predicted as he attempts to deliver his lover from evil and tries to protect her from harms.

Beside Ophelia’s obedience to her father, Hamlet’s relationship with his mother could possibly be one of the factors that impact the relationship between Hamlet and Ophelia. Hamlet emanates and views images of women due to his experiences with his mother’s relationships. Hamlet’s mother, Gertrude, is the antithesis of her son. While Hamlet is searching for life’s ‘mortal coil,’ his mother is shallow and loathsome. She always seeks of external pleasures. Her adultery turns Hamlet so violently against her. He disgusts his mother for marrying his uncle, Claudius, after a short amount of time of his father’s death — “Ay, that incestuous, that adulterate beast, With witchcraft of his wit, with traitorous gifts,–O wicked wit, and gifts that have the power So to seduce!–won to his shameful lust The will of my most seeming-virtuous queen.” (1.5.42-5) After the king’s death, Gertrude’s discourteous actions change Hamlet’s perception of love. To Hamlet, the fact that his mother is so barbarous to her husband by not mourning him during his burial is such a betrayal of love and the marriage that they shared. As a result, Hamlet concludes that the queen never truly loved the king as much as how the king loved her. In Shakespeare’s Hamlet, Hamlet dedicates his whole life trying to revenge of the death of the king because he believes that his father was mistreated by those he loved. The hatred that Hamlet carries causes him unable to show his love towards Ophelia properly because he had lost his trust in love and women. When he finds out that he got betrayed, he reaches the level of hating Ophelia. Hamlet himself abhors that his lover shares his mother’s betrayal character. Because of Gertrude’s boorish plans over her beloved husband, Hamlet’s love for Ophelia is significantly affected.

The Ugly Love of Hamlet and Ophelia. (2021, Mar 18). Retrieved from http://studymoose.com/the-ugly-love-of-hamlet-and-ophelia-essay 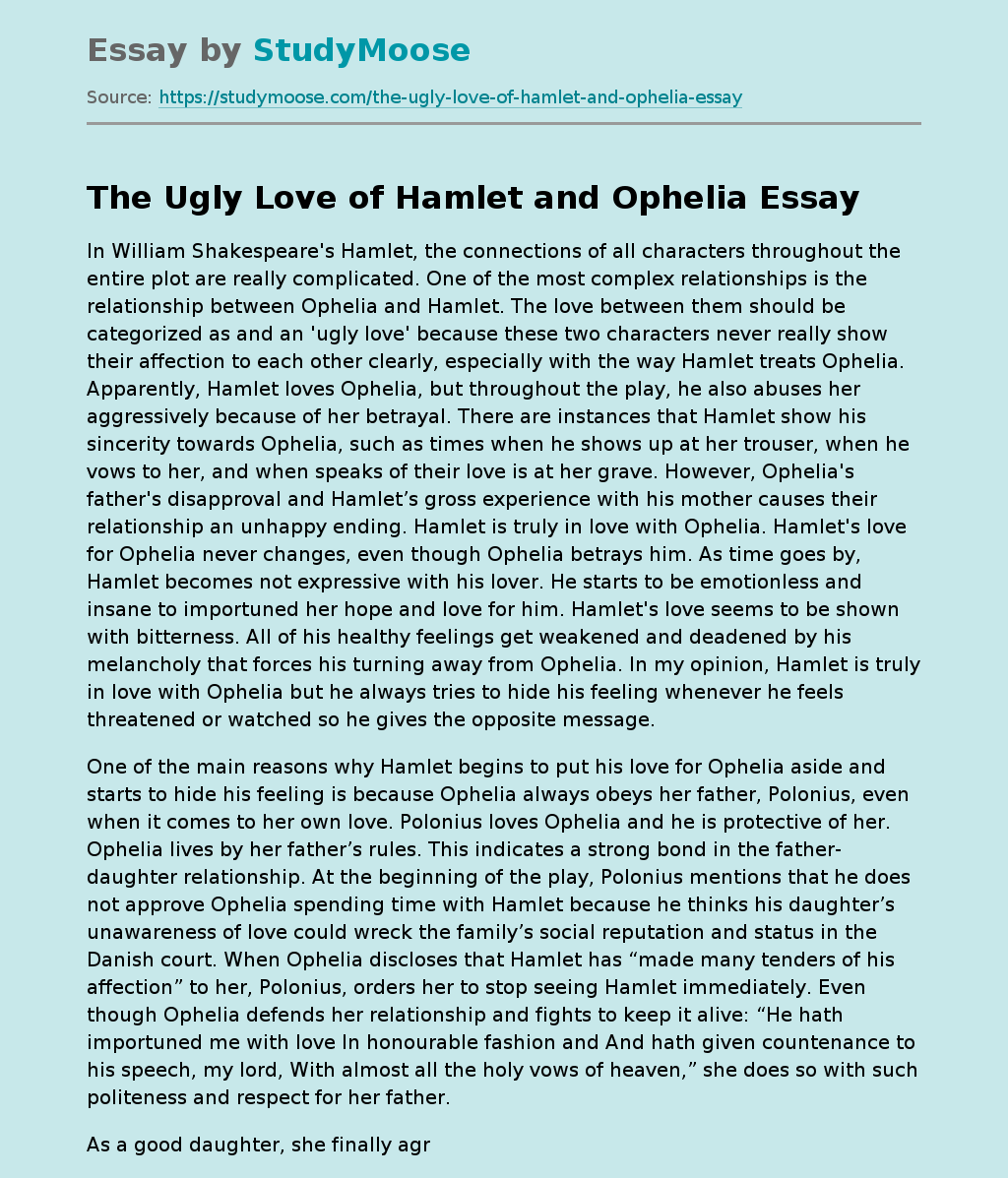