In the course of time, William Shakespeare had been one of the most famous writers of all time. As an author, he was able to create different types of stories which had been literary treasures for the society until this very day. Therefore, Shakespeare is a staple literary author who is able to provide his perception and wisdom in the world. Furthermore, there are different versions made to interpret the story written by Shakespeare, some of these are plays or movies which had been presented to the whole society in different parts of the world.

Don't use plagiarized sources. Get your custom essay on
“ Hamlet 1990 ”
Get custom paper
NEW! smart matching with writer

One of the most popular literature works written by Shakespeare is Hamlet which is still interpreted until the present time. This review will be based on Shakespeare’s tragedy of Hamlet, Prince of Denmark. This film was directed by the well known director Franco Zeffirelli which starred Oscar nominees Mel Gibson, Glenn Close, Paul Scofield and Alan Bates. The main story of Hamlet was led to a complex relationship with all the characters involved.

In the story, it is Hamlet who has the most complicated character in the story. One of these is Hamlet’s relationship with Gertrude which could be seen through different types of perceptions and interpretations. Reflecting on the literature made by Shakespeare, it was narrated that Hamlet intended to kill Claudius for avenge of his father’s death. However in the movie, Hamlet is motivated to kill Claudius due to his love for his mother.

Furthermore, the movie utilized these lines, “You cannot call it love; for at your age the hey day in the blood is tame, it’s humble.

Therefore, the romantic relationship of Gertrude and Hamlet could be an interpretation of the director. More so, various kinds of movies are not the same as others. There are portions of the literary work which was limited to certain characters and scenes. Hence depending on the director, he is able to contort or develop the story through his own liking. Definitely, this relationship of Hamlet and Gertrude is an important plot of the story which relies on the desire of the director or the producer.

Moreover, this version of Hamlet is very controversial it maintains a certain level of immorality due to the romantic relationship of Hamlet and Gertrude. There are many attempts to create a very realistic interpretation of the story. Therefore in this movie the director unveiled the possible sexual and romantic attachment of both characters. Although such relationship is a taboo and immoral for the society, it reveals certain possibilities for the audience to realize that such event could have happened in the mind of Shakespeare. 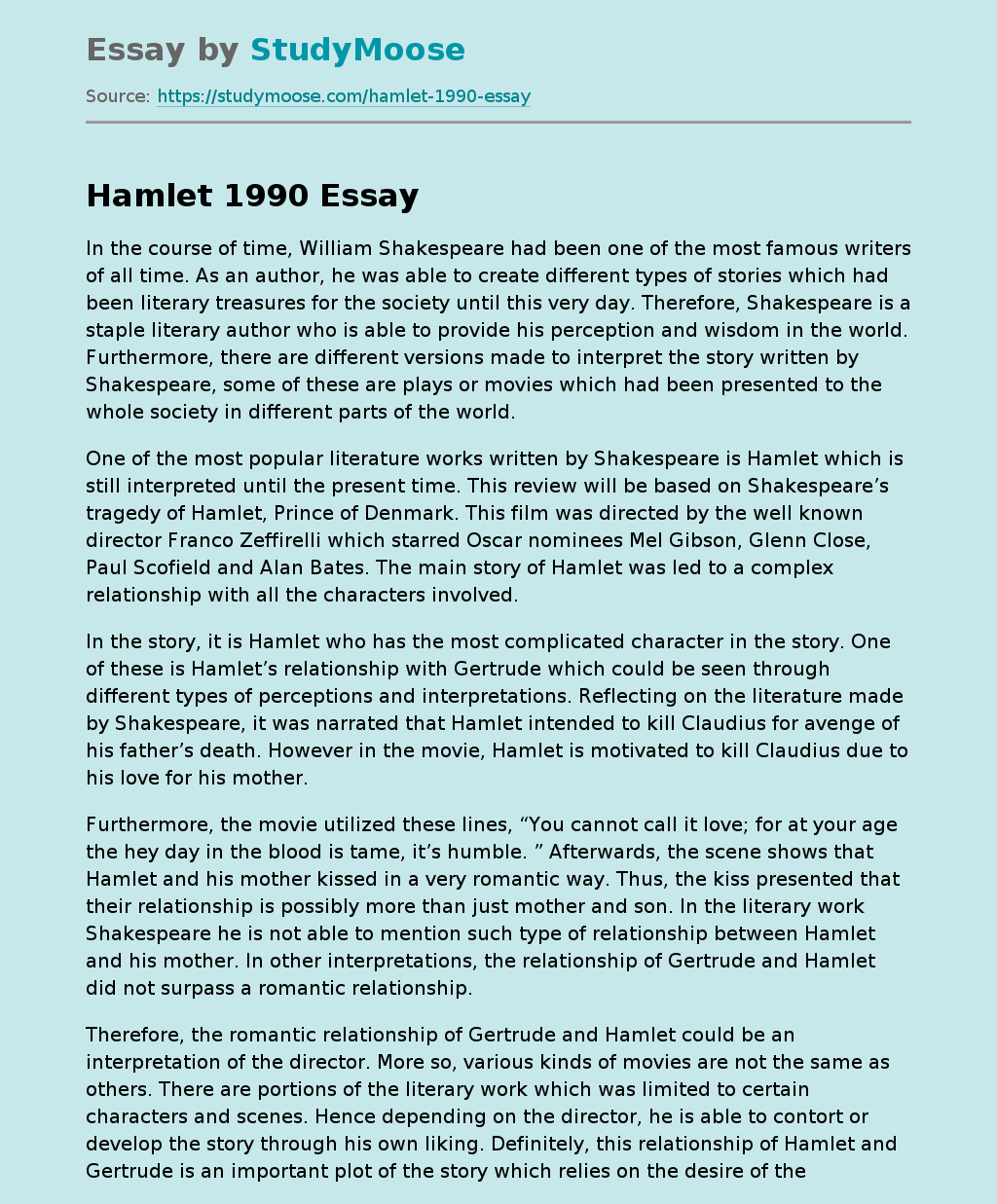