Symbolism: the Adventures of Huckleberry Finn

Many novels have used symbolism to express certain feelings and emotions in discreet ways. What is symbolism? “The practice of representing things by means of symbols or of attributing symbolic meanings or significance to objects, events, or relationships” (Dictionary. com). Numerous authors use the same denotations to illustrate different thoughts or ideas. Mark Twain uses various symbols, such as the river and the land to expose freedom and trouble in his novel, The Adventures of Huckleberry Finn.

The Adventures of Huckleberry Finn, by Mark Twain, uses various concrete objects, such as rivers, to symbolize a diverse range of feelings, emotions, and even actions.

Turn in your highest-quality paper
Get a qualified writer to help you with
“ Symbolism: the Adventures of Huckleberry Finn ”
Get high-quality paper
NEW! AI matching with writer

The ultimate symbol in the novel is the Mississippi River. Rivers often times symbolize “life itself, they are the flux of the world in manifestation, the macrocosm’ (Cooper, 139)” (Protas, Allison). “River symbolism is based around water in movement” (Fraim, John). “On the river? Huck and Jim witness life and death, tragedy and comedy, strife and peace” (The Adventures of Huckleberry Finn).

In this case, the river has served as a mechanism for the developmental maturity of Huck. Huck and Jim quickly discover is the key to happiness for them both. They begin to feel a special relationship between themselves, somewhat like mismatched friends. They realize they are beginning to rely on each other so much, that eventually they will need the other to survive. “The river symbolizes freedom, in contrast to the restrictions and responsibilities Huck experiences on land” (The Adventures of Huckleberry Finn).

“A river can also provide a way of escaping from the culture of the nation.

The stories of Tom Sawyer and The Adventures of Huckleberry Finn utilize the Mississippi River as something to flow down, with the current, and away from civilization” (Fraim, John). “Twain uses the river to symbolize the confluence of all currents of American life in the first half of the nineteenth century” (The Adventures of Huckleberry Finn)”Huck believes that ‘he had never felt easy till the raft was mile below there and out in the middle of the Mississippi.

Freedom is a wonderful thing many Americans today take for granted. According to Webster’s Dictionary, the word freedom is defined as “the condition of being free from restraints. ” Although, both characters, Huck and Jim, were free in different senses, they were still free. “… Because the river was so peaceful and calm that it led to their freedom to do as they please without the barriers given by society on land” (Examining the River in Terms of Symbolism in “The Adventures of Huckleberry Finn”)”Jim is safe from those who hunt runaway slaves.

On the river, Huck has the time to ponder all that goes on around him; he has time to learn from Jim and also play teacher” (TK, Angie). “The most surprising aspect is when Huck stated that ‘we was always naked, day and night. ‘ This continues to portray the theme of peace, calmness, and freedom that is given to the characters by the river” (Examining the River in Terms of Symbolism in “The Adventures of Huckleberry Finn”). The river also promotes Huck’s maturity.

“We actually see Huck grow up having the river as a place for solitude and thought, where he can participate at times and other times sit back and watch” (Examining the River in Terms of Symbolism in “The Adventures of Huckleberry Finn”). One major dilemma Huck contemplates over is turning Jim in. If he does so, he will lose his best friend. But, on the other hand, if he does not, he will be “forever damned to the pits of Hell” (TK, Angie). “When asked who is on the raft, Huck masters his inner dilemma by replying ‘He’s white,’ and showing us a sliver of inner mortality in the face of a racist world (Twain, 76)” (TK, Angie).

The river also illustrates calmness opposing to the land, which is very demanding and troublesome. Another prominent symbol in the novel, The Adventures of Huckleberry Finn is the land. The land is where everything bad happens. Anything even vaguely associated with land, initiates danger and/or hidden tricks that could be turned on Huck and Jim at any given time. For example, the first dilemma Huck and Jim encounter are on Jackson’s Island. “What Huck considers to be an amusing joke almost kills Jim.

Huck puts a dead snake in Jim’s bed, but little did Huck remember that a dead snake’s mate will always come after it. Jim was ? laid up for four days and nights,’ before he’s finally well again (Twain, pg. 46)” (TK, Angie). As one can see, Huck prefers life on the river, compared to land. This is understandable considering Huck associates the land with running from h arm and witnessing his friend, Buck, get killed. Another problematic incident that arises around the land is when Huck suggests that they embark an abandoned boat wreck.

Huck is the more brave and audacious of the two; but, Jim being the more sensible and cautious, is hesitant. Huck drags Jim onto it anyways. On the ship, the two come across a band of thieves about to drown one of their own; when the pair returns to the raft, they find it has been untied and is drifting downstream from them. After all this, they decide to steal the robbers’ getaway skiff. They become separated and loose each other for the time being. When they manage to reconnect with each other, a dominating steamboat pan caked their feeble, debilitated raft.

“All of these terrible things that happen in this amazing tale of one boy’s ascent into manhood emanate from the land – – the people, the boats, the animals – – all of these come from the land” (TK, Angie). After several more detrimental adventures, one can easily understand why the land is such a vicious, unacceptable place to live life for Huck and Jim. In conclusion, one can see Mark Twain uses various symbols to identify emotions in the classic novel, The Adventures of Huckleberry Finn.

Although many other authors use symbolism in their own personal novels, one can see that Twain’s symbolism dramatically stands out. It is not difficult to point out the outstanding symbols Twain chose to represent in this all-time American favorite. Also, as a very accomplished writer, Twain is a role model for many aspiring writers from just this one classic. Many authors have learned and are still learning from this great writer. Although many may not be as good as Twain in using symbolism, they will learn over time; after all, practice does make perfect.

Symbolism: the Adventures of Huckleberry Finn. (2016, Sep 06). Retrieved from https://studymoose.com/symbolism-the-adventures-of-huckleberry-finn-essay 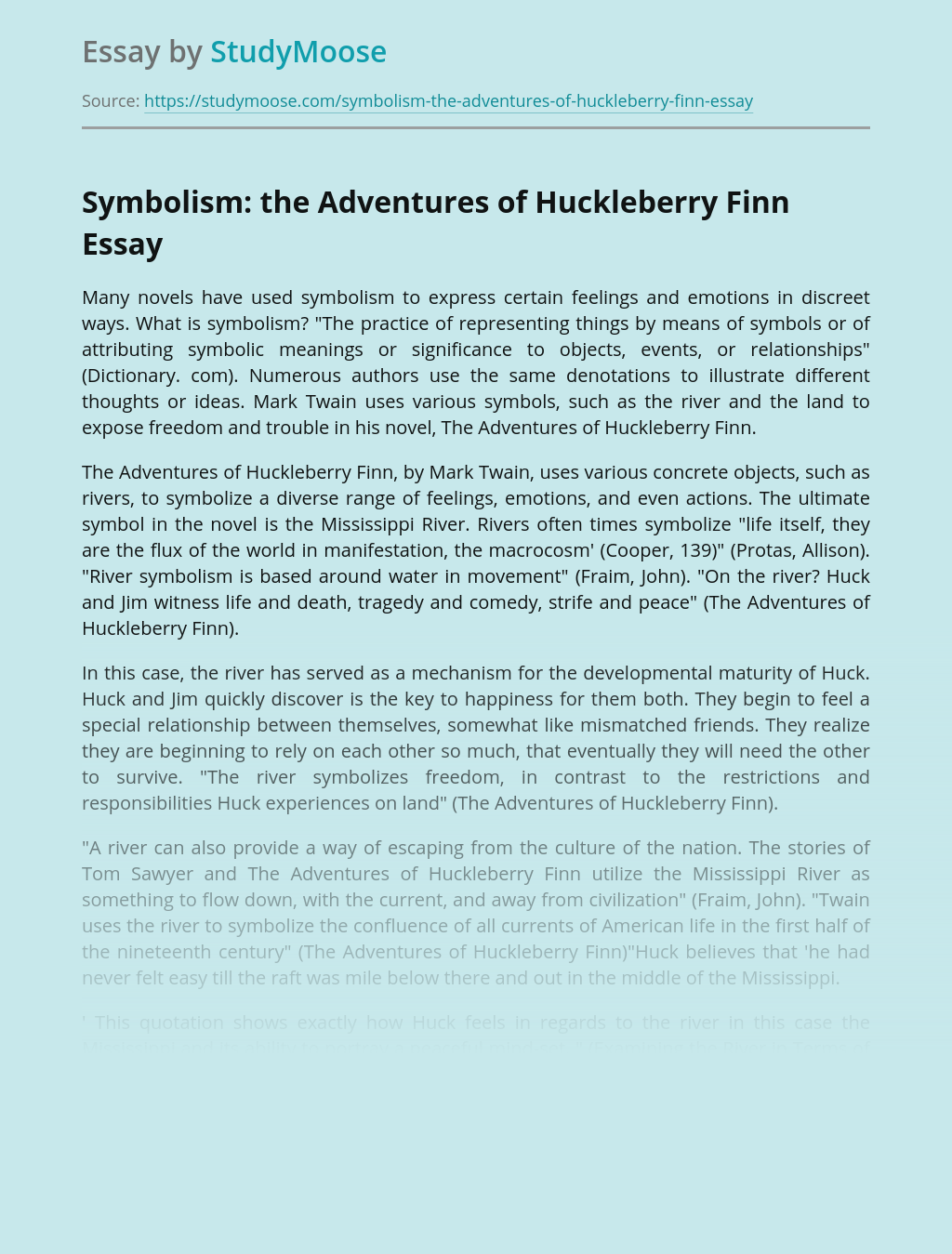 Turn in your highest-quality paper
Get a qualified writer to help you with
“ Symbolism: the Adventures of Huckleberry Finn ”
Get high-quality paper
Helping students since 2015
Stay Safe, Stay Original