Ethnomethodology and Symbolic Interaction in Society

Don't use plagiarized sources.
Get Your Custom Essay on Ethnomethodology and Symbolic Interaction in Society Just from $13,9/Page

Symoblic interaction studies and theorises the way in which individuals in society act towards each other based on the meaning that they have for different actions and processes. The meaning we attach to certain actions is the product of the individual’s previous social interaction and therefore the individual continues to handle and modify their own interpretation during all their social encounters.

One of the founding theorists of the symbolic interaction was Herbert Blumer and he suggested that we attach meaning to the actions of other individuals and therefore we do not only respond to the actions of the individual but also to the meaning we attach to that action. Therefore people behave and react, in social interaction, because of what they believe and not by what is taking place at the time. Thus the construction of society is based on human interpretation of social action and therefore social bonds are only formed through two individuals interpretation of behaviour.

The theory and meaning of Ethnomethodology can be formed by breaking down the word into its component parts. Ethno meaning people, method meaning method and ology meaning the study of makes Ethnomethodology the study of the method of people. A better definition of the theory is the study of society in everyday life and the analysis of the use of knowledge, actions and interpretations in social situation. Ethnomethodlogists are interested in understanding how an individual makes sense of the social world and is linked to phenomenology. Harold Garfinkel emphasised the use of language and communication as way of analysing the way people make sense of their environment.

This difference in the interpretation of meaning results in different views on certain types of research method and what data is used and the validity of that data. In ethnomethodology the focus is put on the social interaction or communication, they are studying, whilst it takes place and therefore video recording, live observation and audio recordings are used as the key methods of research and analysis. However in symbolic interaction there is much more focus put on field notes and post social interaction recollections such as interviews and group discussions which in the field of symbolic interaction is valid enough to gain the point of view of the actor. This is in stark contrast to ethnomethodology who believe that the actor’s point of view is irrelevant in sociological study. There is much criticism of the symbolic interactionist method as there is no set structure in their methods and they rely heavily upon the actor to give his or her point of view which is considered not valid by the ethnomethodologists.

Ethnomethodologists study behavioural norms not only by looking at the individual interactions, like symbolic interaction, but by attempting to break these norms and studying how society and the individual react. Through this theory Ethnomethodologists believe you get a clearer consensus of what is the norm as people find it difficult to describe what is the norm as most of it is in the sub-conscious.

Ethnomethodlogists believe that it is only when these norms and behavioural patterns are broken that the norms become more apparent as people are not become accustomed to react to the new form of behaviour. A famous example of this method was when college students in the US were asked to act like guests in their own homes. They were told to be impersonal but formal and to study the reaction of their parents and family. After explaining the experiment to their parents many parents described different reactions. Some parents believed they wanted something, others thought it was a joke and some believed they were hiding things. This experiment allowed the students to see that even informal norms that we take for granted in the home are carefully structured and by disrupting these norms they become clearer.

However Ethnomethodology and Symbolic Interaction do have their similarities and despite their different approaches they do study the same area from similar perspectives. Both theories study the micro world of interaction theory and despite the fact that both are criticised for having a very narrow field of research they do look at very similar things. Although there is one area in which symbolic interaction is studied in the macro world and that is in Goffman’s study of ritual. Despite the fact that both theories study the perspective from the micro world, Ethnomethodology is rarely studied outside of two areas, the first being the household and the second being conversational. Ethnomethodology puts great emphasis on the role of communication in social interaction and therefore limits the field of study they can look at. Symbolic interaction covers a much broader field of study in the micro world. It does not only look at communicational interaction but also at the action and interpretation of the forms of social interaction.

In conclusion it is obvious that these perspectives differ on how they approach the subject of social interaction but there differences do not mean that they are not very similar fields of study. Mary Gallant suggests that both ethnomethodology and symbolic interactionism share a ‘verstehen’2 approach and that they both ‘interpret behaviour by taking actors’ meanings into account’3. However where they differ is in their approach to the topic of social interaction and therefore they gain different kinds of understanding due to the fact that they are seeking answers to different questions. This is due to the fact that Ethnomethodology studies social interaction from a largely ‘phenomenological’4 viewpoint and looks at how individuals look at the real world with particular focus on communication and speech. Whereas symbolic interactionism is part of the ‘critical tradition’5 and looks more at how people give meaning to the world around them. Despite the fact that as Dennis suggest the Ethnomethodological approach means that the symbolic interactionists focus on actor, meaning and context is ‘unnecessary’6 it does see it as a ‘valid sociological perspective’7. So although there are many differences in the perspectives the theories have on social interaction they do have similar ways of looking at the world and they do both study the same micro field of sociology.

Ethnomethodology and Symbolic Interaction in Society. (2016, Mar 01). Retrieved from https://studymoose.com/ethnomethodology-and-symbolic-interaction-in-society-essay 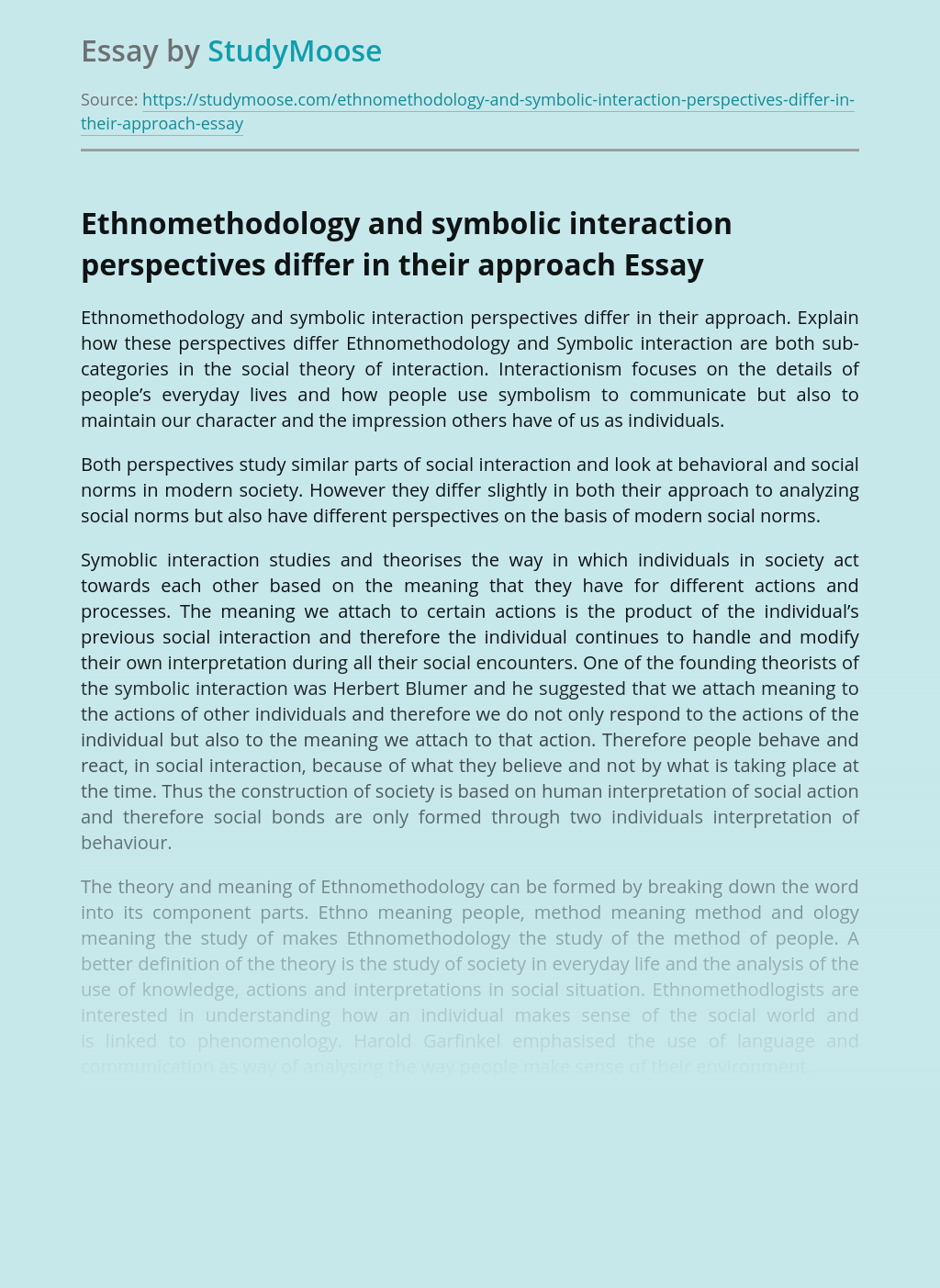 “Bastille Day, on the Fourteenth of July, is the French symbol of the end of the Monarchy and the beginning of the French Revolution” (www. hightowertrail. com). Bastille Day is a national, symbolic, historical French holiday and is celebrated every July 14. To celebrate Bastille Day, also known as La Fete de la Bastille, French...

Soliloquy and Figures of Speech in Romeo and Juliet, Part 4 Eng 2 answer keys

Read the dialogue found in Act II, scene iii of Romeo and Juliet. Romeo: Good morrow to you both. What counterfeit did I give you? Mercutio: The slip, sir, the slip; can you not conceive? Romeo: Pardon, good Mercutio, my business was great; and in such a case as mine a man may strain courtesy....

Get Essay
The Laws of Hammurabi and Moses

Hammurabi had been an interesting person prior to making this paper. The Code of Hammurabi was very popular topic because it depicts a great person or king. The question that might be asked is who is Hammurabi? On the other hand, to those who have background in the Bible, might know who Moses is and...

According to personal expediencies many hobbies and interests are come and gone, but always dangerous sports and its news always had a large presence.Formula one and Heli Skiing are two of world famous and very dangerous sports, both sports have the impact and the interest around the world. Formula 1 is originated by Britain over...

Martin Luther King’s inspiration for writing his, “Letter from Birmingham Jail” was mainly to appeal to an undeniable injustice that occurred during his time. His letter was in response tos eight white clergymen, who objected to King protesting in Birmingham. Dr. King effectively crafted his counterargument after analyzing the clergymen’s unjust proposals and then he...