Some say that Hemingway’s personal life should disqualify him from the literature canon. They state that his torrent affairs, his alcoholism, and his mental state should preclude him from entry into the canon. These are the very things that help to make Hemingway a unique writer. Although his genre is fiction, he relies on his real life experiences with the people and places that he visited. The very definition of the literary canon disputes these critics. “The authors that represent the literary canon are those that are widely assigned in high school and college classrooms and have had a great influence on other authors.

Don't use plagiarized sources. Get your custom essay on
“ Ernest Hemingway, a Legacy for American Literature ”
Get custom paper
NEW! smart matching with writer

Literary critics and historians frequently and fully discuss them. The works by these authors are most likely to be included in anthologies and studied as World Masterpieces, Major English Authors, or Great American Writers. ” (Goodvin) Hemingway’s influences on other writers and his worldwide acclaim, along with his distinctive style have earned him a spot in the American Literature canon.

Ernest Hemingway was once one of the most prominent people on the earth. Numerous countries respect Hemingway and his writing style. His creative writing details the lives and life’s lessons of people such as bullfighters, anglers, and soldiers.

His portrayal of these men of courage who were seemingly indifferent to joy, grief, pleasure, and pain won him acclaim from critics all over the world. “His legendary writing style, influenced by Ezra Pound and Gertrude Stein,” (American Authors) is direct, to the point, and spoken in an even tone.

This style is suited to his main subject matter. His straightforward no frills writing style became so well known that many others frequently copied it. Some literary critics consider Hemingway, as “the father of The Lost Generation, a subcategory, of the American Modernist Period in literature.

” (Goodvin) Hemingway’s literary legacy is his off hand, direct story telling prose, which has been a helpful model for numerous novelist of the twentieth century. “The impact of Hemingway’s style on American Literature is massive. It still has influence today. ” (American Authors) His style influenced so many authors that his style is in a great deal of fiction today written by other authors who copied it. Some of the authors of today are influenced either directly by Hemingway or indirectly through other writers who emulated his style.

James Nagel, Professor of American Literature at the University of Georgia, said it best, “No other writer has equaled Hemingway in portraying a cultural image that links the time-honored masculine virtues of power, honesty, and fortitude. ” His writings reveal an unwavering commitment to literature and to the integrity of his craft. He captures the essence of the human experience in a writing style that is uncomplicated, direct, modest, and pleasingly stylish. Hemingway learned to write in controlled and understated prose as a cub reporter for the Kansas City Star. This style has served him well and he used it in the best of his works.

Hemingway’s simple style, absent of elaborate extremes and metaphoric add-ons has influenced many of today’s reporters in almost all multi media such as newspapers, magazines and even television news. The refinement of Hemingway’s writing style draws from the precision with which he illustrates the character, personality, and temperament of individual experience. In his own time, Hemingway affected writers within his modernist literary circle. According to Kenneth Lynn, “James Joyce called A Clean, Well Lighted Place, one of the best stories ever written.

“Hemingway’s style portrayed the truth of the situation. He influenced writers such as “Jack Kerouac, The Subterraneans (1958)” (American Authors), and other Beat Generation writers. J. D. Salinger, writer of The Catcher in the Rye (1951), “is said to have wanted to be a great American short story writer in the same stratum as Hemingway. ” (Qtd Lynn 416) “Hemingway’s abrupt prose style is known to have inspired Bret Easton Ellis, Less than Zero (1985), Chuck Palahniuk, Fight Club (1996), Douglas Coupland, Generation X: Tales for an Accelerated Culture (1991) and many other Generation X writers.

” (Burgess) Even when Hemingway was in his early stages of writing, when he was just developing into the writer he would become, noted novelist such as Stein, Ford, Ezra Pound, F. Scott Fitzgerald, and James Joyce proclaimed him the next great American novelist. (Burgess) Hemingway’s influence goes beyond the more recognized fiction authors. His tightly written prose is in quite a bit of Western and Crime genre novels by Elmore Leonard. (American Authors) Leonard once said, “I learned by imitating Hemingway? Although, I didn’t take myself or anything as seriously as he did.

” (Qtd. Burgess) Hemingway’s impact on Latin American Literature can be seen in the works of Gabriel Garcia Marquez, who imitated Hemingway’s view of man’s struggle with the sea in many of his novels. Marquez not only emulates Hemingway’s view, he also duplicates his writing style. (Burgess) Hemingway’s first three books, Three Stories and Ten Poems (1923), In Our Time (short stories, 1924), and The Torrents of Spring (a novel, 1926), had fascinated critics chiefly because of his literary style. Hemingway’s first novel, The Sun Also Rises (1926), won him worldwide fame.

A plot less story concerning disheartened refugees in Paris who break away from their boredom with alcohol consumption, fighting, and sex; this novel turned out to be the standard by which all other writers of the lost generation would be compared. Hemingway only improved his writing style with his next book, A Farewell to Arms (1929), based on his wartime experience in Italy. His coverage of the Spanish Civil War as a correspondent spawned another fine novel, For Whom the Bell Tolls (1940). Hemingway’s novella, The Old Man and the Sea, (1952) first published in Life magazine and was never meant to be a book.

It is a fundamental story about an elderly Cuban fisherman; the book won the Pulitzer Prize. According to Lynn, “it was mentioned as one of the reasons he was awarded the 1954 Nobel Prize for literature. ” (Burgess) Hemingway also published several other short stories, which glorify masculinity, courage, and the value of life itself. Although, some of these short stories are not as popular as his novels, they do play an integral role in understanding just how enormous Hemingway’s influence on American Literature has been.

Although Hemingway has many works, his truth in writing always remains the same. His portrayal of life has also been significant, for he portrays a truthful world of selfishness and hostility, of conflict that naturally occurs in relationships and the cruelty of war, which has everlasting effects on the psyche of his major characters. His theme of the effects of violence and the consequences of greed has a profound effect in the lives of his characters. Jake Barnes is sexually dysfunctional in “The Sun Also Rises,” and he cries in the private over his infatuation for Brett Ashley.

In “A Farewell to Arms,” Frederic Henry has seen the destruction of war, which pales in comparison to the loss of the one woman he loved. In “For Whom the Bell Tolls” there is not only the loss to the people of Spain, there is a private defeat as well, as Robert Jordan is about to die just as he finds his one true love in Maria. In “The Old Man and the Sea,” Hemingway depicts an aged Santiago searching for dignity in old age. He must win a long fight with a marlin to prove, one final time, that he can still be a functional member of society.

It is as writer that Hemingway merits the consideration of the American Literature canon. He is defiantly one of the best prose stylists in American Literature. His astonishing short stories portray the agonizing realities of his age and forces into public view a comprehension of the realities of war. The exploits of Nick Adams paint a picture of the agonies faced by the adolescents of his generation; Hemingway’s four most popular novels trace the distressing confusion of life, for all time.

Hemingway makes clear in “The Old Man and the Sea” that even in the distress of life there can be dignity in determination and pride in dedication when performing a task, which everyone says cannot be done. As a novelist, Hemingway was perfection. It is in the truthfulness, which he approaches his writing and the expertise above all, which will carry on. Works Cited American Authors. “Ernest Hemingway. ” All Experts Encyclopedia. 1999. 21 Mar. 2007 http://en. allexperts. com/e/e/er/ernest_hemingway. htm#hd9 Burgess, Anthony “Ernest Hemingway and His World. ” 1st ed. 1978. 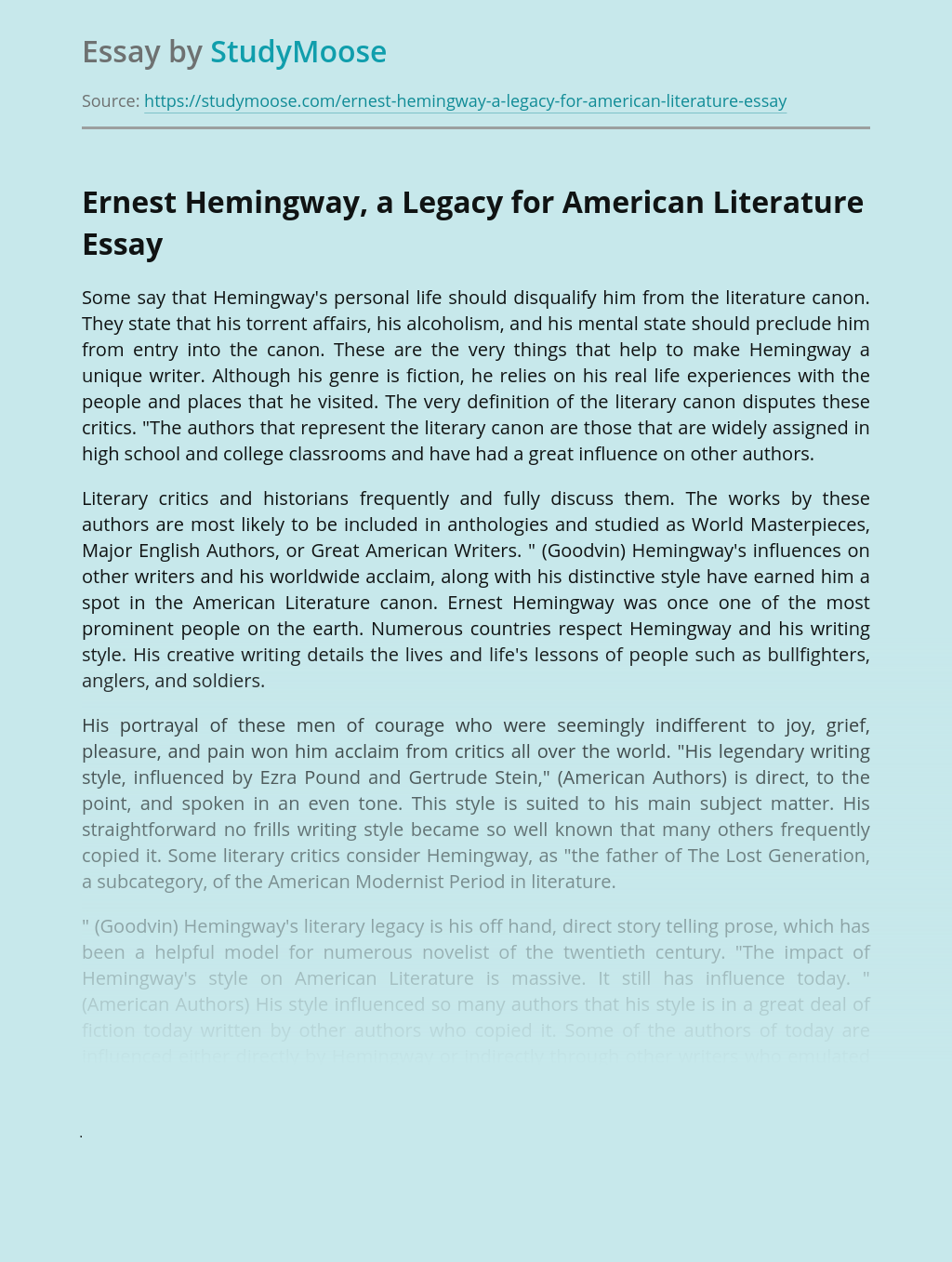