Essay on “Me talk pretty one day”

”Me talk pretty one day” is an essay written by David Sedaris in 2005. It tells the story of the authors return to school at the age of forty-one and about his experience with learning French in Paris with a very strict teacher. The theme of the essay is David Sedaris attitude towards learning a new language. Although he seems to have an attitude towards learning French he actually moves all the way to France with only one month of French lessons as his previous experience with the language because he does not think that he can learn proper French in America.

Don't use plagiarized sources.
Get Your Custom Essay on Essay on “Me talk pretty one day” Just from $13,9/Page

Throughout the essay you can almost hear the author’s ironic and sarcastic voice. He creates an ironic tone to the whole experience of learning the language which gives the essay some humor. The language in the essay is very informal which is supported by him talking about own experiences. He uses a lot of imagery and has a tendency to exaggerate his experiences.

This gives the reader some lifelike pictures of the situation. He also gives the reader the feeling that they are there with him by using sentences as: “’Even a fiuscrzsa ticiwelmun knows that a typewriter is feminine” (p. 2, l. 72). He gives the reader the whole experience of him learning the language. He does not know the words and he makes it easier for the reader to identify with him. His attitude towards learning the language changes throughout the essay. He starts by being positive but after his first lesson he feels terrified. Even though he is the oldest one there, the teacher makes sure that there is no segregation. The teacher is very strict and does not care to give the students a hard time. “Before beginning school, there’d been no shutting me up, but now I was convinced that everything I said was wrong” (p. 3, l. 101). This shows us that he is so afraid of the teacher that he does not dare to use the advantage that he actually is in France.

He can easily improve his language by trying to speak outside of the classroom but he simply does not dare because of his teacher’s personal attacks. The teacher completely ruins all of the students’ confidence. It ends up with them feeling as if they were in a war zone. “We soon learned to dodge chalk and protect our heads and stomachs whenever she approached us with a question” p.2, l. 83-84). This feeling of fear and shame ties the students together and there is no competition between them. Sedaris wants to avoid the attacks and the humiliation so he starts studying really hard. He wanted an identity but the teacher would not let him have that. He was constantly reminded that he could not speak French which also shows in the title: “Me talk pretty one day”. It shows the insecurities in Sedaris’ and the other students faith in learning the language. They all hope that one day they will be able to speak and understand French but has lost the hope because of their teacher. David Sedaris describes the teacher as: “a wild animal “(p.2, l 82). “She crouched low for her attack” (P. 2, l 52). This makes her stand out like terrifying and aggressive. The teacher’s attitude towards her teaching seems to be that if she pushes them hard enough it will end up giving good results.

Even though Sedaris describes the teacher as a terrifying wild animal he still has a humorous tone around it which makes it relatable for the reader since most people has found themselves in a similar situation. Towards the end of the essay we get the feeling that Sedaris’ French has improved. The teacher’s insults do not seem to bother him that much anymore. By the teacher being so strict to everyone, do the insults not seem to be that serious and maybe not something she means entirely. Suddenly he could handle her personal attacks and it occurred to him, that for the first time since arriving to France he could understand every word of the teacher’s sentence. Even though she had just insulted him he feels like it was a victory for him. He cannot speak the language but it is a step in the right direction.

He had lost all hope in ever improving in this class but now he had. He becomes curious and it gives him the lust for learning back. He ends the essay with the sentence: “Talk me more, you, plus, please, plus” (p. 3, l 128). This shows us that he wants to learn and he does not care if the teacher insults him, he just wants to hear the language and learn from it. David Sedaris’ essay shows that to learn a new language you need to learn the culture around it and you have to feel at home in the situations where the language are included. Learning a language is not just about learning the words and the sounds which the teacher ignores completely as she exclusively focuses on the form of the language rather than its use.

Essay on “Me talk pretty one day”. (2016, Aug 07). Retrieved from https://studymoose.com/essay-on-me-talk-pretty-one-day-essay 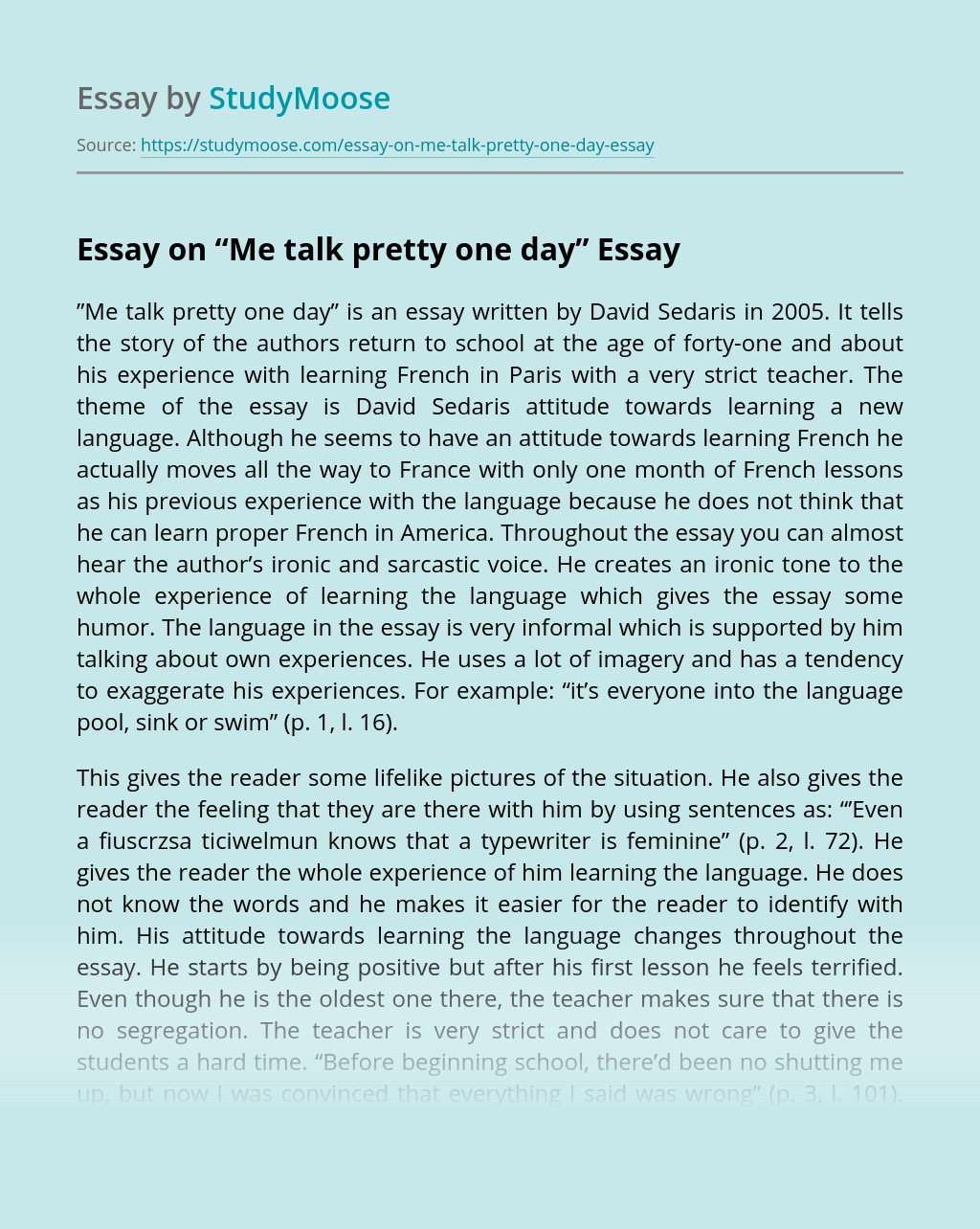 "Forbidden Planet" and "The Tempest"

The Theory of Operant Conditioning

Introduction The study of human behavior by psychologists such as B.F. Skinner, Edward Thorndike, Ivan Pavlov, and Watson is fascinating. These five psychologists each have different theories on human behavior. There are similarities and differences in each of the theories. Ivan Pavlov’s classical conditioning theory, studied animals and formed the basis for behavioral psychology (Cherry,...

Get Essay
Education and Happiness

Mosley refers to the status quo in an unfavorable method and I do agree with his viewpoints. Americans simply don’t seem to have some happiness in their lives any longer, and we should question why that is the case. The educational system doesn’t appear to be any much better when it comes to assisting us...

The Sun Trust is a well renowned and prominent name in the financial market. The Bank has a very large network which assists in deposit, credit, trust and investment services. Mortgage banking, insurance, and asset management, brokerage and capital markets services are the special services which can be provided to the clients through their subsidiaries....