Shylock's Character Traits in the Dialogue

What judgment shall I dread, doing no wrong? You have among you many a purchased slave, Which, like your asses and your dogs and mules, You use in abject and in slavish parts, Because you bought them: shall I say to you, Let them be free, marry them to your heirs? Why sweat they under burthens? let their beds Be made as soft as yours and let their palates Be season’d with such viands? You will answer ‘The slaves are ours:’ so do I answer you: The pound of flesh, which I demand of him, Is dearly bought; ’tis mine and I will have it.

Don't use plagiarized sources. Get your custom essay on
“ Shylock’s Character Traits in the Dialogue ”
Get custom paper
NEW! smart matching with writer

If you deny me, fie upon your law!

There is no force in the decrees of Venice. I stand for judgment: answer; shall I have it? – Shylock, The Merchant of Venice (Act IV, Scene I) In this scene, Antonio has been brought to the court of Venice to answer for his failure to pay his debt to Shylock.

Shylock will not have any other resolution but to cut off a pound of flesh from the breast of Antonio. The Duke of Venice asks Shylock his reason for such hatred for the young man, and replying, “So can I give no reason, nor I will not, / More than a lodged hate and a certain loathing / I bear Antonio” (4. 1. 58-60).

He frames his position as lawful by proclaiming that he does not fear retribution because he is only doing what is accorded of him. This opening line condenses the character of Shylock as a shrewd and stringent businessman who adheres to the deal even if everyone is against him and it leads to another person’s harm. Shylock’s comparison of his want for Antonio’s flesh to the trade of slavery shows his principle in life.

Although slavery is not necessarily humane as it leads to the suffering and bondage of human beings, it is considered legal because of its economic and social importance. Slavery maintains the Elizabethan lifestyle and since slaves are bought, they have already given up their rights as humans. They thus become property of their master and are subject to the master’s own rules. This argument is used by Shylock as a metaphor for his and Antonio’s bond. When Antonio agreed to become guarantor to Bassanio’s debt, he was already placing himself under the control of Shylock thereby in essence making him property of the Jew.

Shylock cunning is demonstrated when, in order to reverse the situation, he challenges the people of the court to treat their slaves, their “properties”, as their equals. This would, he knew, throw that Society in chaos as the deal between slave and master is broken. It is in this context that Shylock creates his case to the Duke of Venice. Shylock’s argument reflects his mastery of merchandising and thus he no longer adheres to the laws of humans but adheres to the rules of trade. This is evident in the last four lines of Shylock’s dialogue when he proclaims that no law in Venice will stop him from collecting the terms of the bond.

Again, it reinforces the fact that Shylock no longer adheres to the laws of man but only respects the rule of trade and business. Shakespeare’s characterization of the Shylock seems to show that stereotyping of Jews as misers and cunning money handlers was already present as far back as Elizabethan period. The Jewish Shylock is presented as the anti-thesis of the Catholic Antonio wherein the Jewish is a very successful and shrewd business and family man compared to the single young businessman who puts all his wealth on the line by getting into a deal even though all his assets were still at sea and unsure of getting to him.

These polarity of the two characters may be the reason behind Shylock’s disdain for Antonio as the youth stands fro everything that the Jewish despises. In conclusion, this dialogue of Shylock aptly describes his character. His unbending adherence to the rules of the bond paints him as the antagonist of the story, even though he was just following what he knew to be right.

Shylock's Character Traits in the Dialogue. (2016, Sep 17). Retrieved from https://studymoose.com/shylocks-character-traits-in-the-dialogue-essay 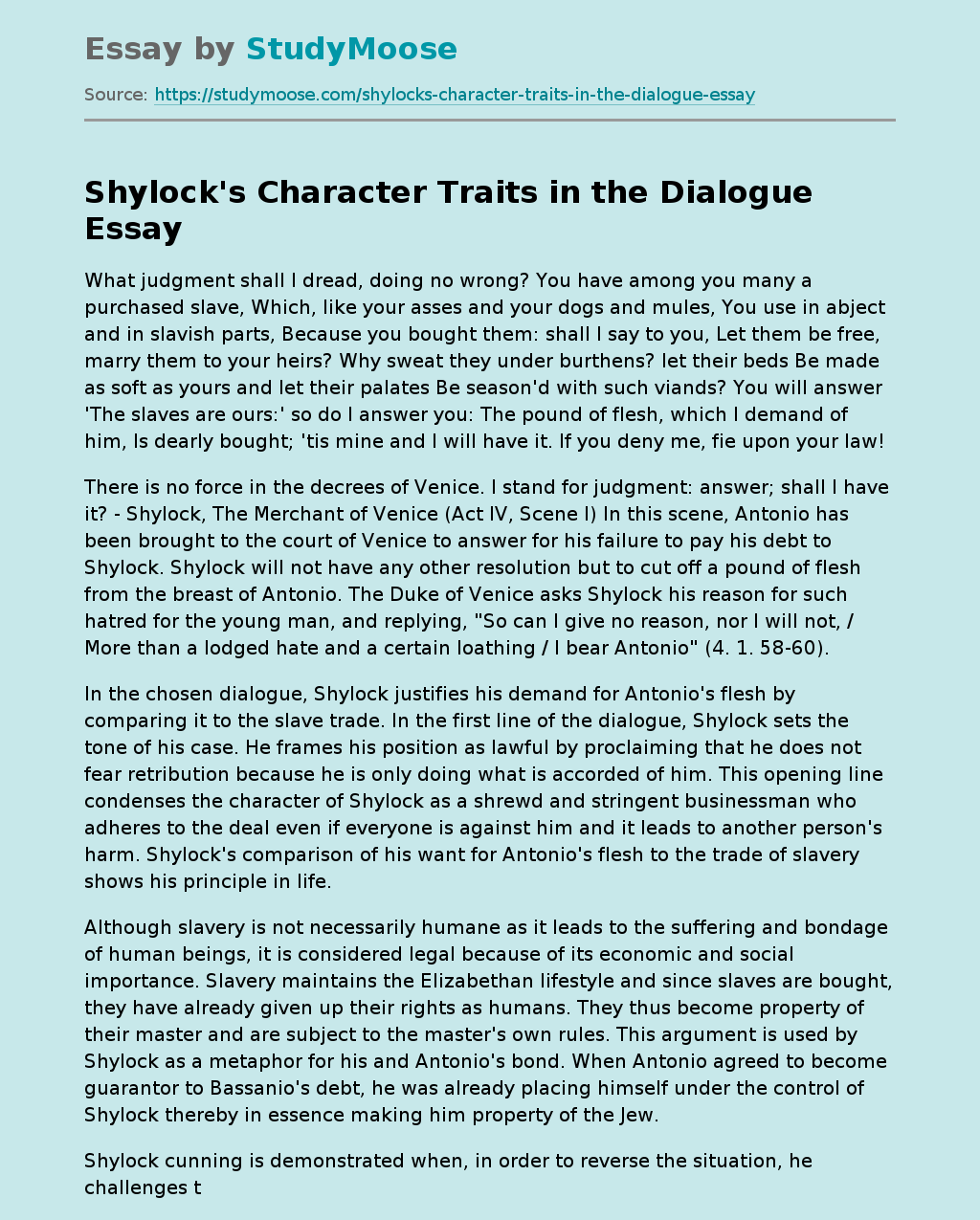