Shylock as a Victim and as a Villain

Shylock is sometimes a victim and sometimes a villain although his punishment, in my opinion, was not completely deserved. He first appears in Act 1, Scene 3, when Bassanio and Antonio ask him for the loan of 3,000 ducats. Shylock is plotting his revenge on Antonio, he clearly hates Antonio “for he is a Christian” and because he lends money without charging interest and so, brings down the rate of interest in the money lending business. Shylock is reluctant to lend the money to Antonio as he despises the way in which he is treated by Antonio: “Should I not say, Hath a dog money? Is it possible a cur can lend three thousand ducats?” Antonio asks Shylock to “lend it to thine enemy”, in other words to lend the money to him as an enemy and not as a friend which he evidently is not.

Don't use plagiarized sources. Get your custom essay on
“ Shylock as a Victim and as a Villain ”
Get custom paper
NEW! smart matching with writer

Shylock decides that the forfeit, if the bond is not paid, should be “…an equal pound” of Antonio’s “fair flesh” to be cut off and taken “in what part on the body pleaseth me”.

Shylock pretends that he has only thought of this term recently – he is deadly serious. Bassanio tells him not to agree. Antonio is deceived by Shylock, he has no idea how much Shylock hates him. Antonio believes that Shylock is growing kind, he says he “…will turn Christian” although that statement must have been deeply insulting to Shylock.

It is easy to sympathise with Shylock here, taking into account Antonio’s bullying way with him.

Throughout Acts 2 and 3, other characters add to the view that Shylock is victimised. Salarino and Solario behave like Antonio; Launcelot leaves his service and even his own daughter deserts him. Shylock is devastated at this: “She is damned for it My own flesh and blood to rebel!” Apart from two brief scenes with Tubal, Shylock is not shown with other Jews, so we are usually given the Christiansl view of him.

Shylock demands the letter of the bond, he is angry and distraught and he says that Antonio “…hath disgraced me and hindered me half a million, laughed at my losses, mocked at my gains, scorned my nation, thwarted my bargains, cooled my friends, heated mine enemies – and for what reason? – I am a Jew.” He is also distressed at the fact that his daughter took some diamonds and is spending a lot of money – this shows a greedy side of his nature. His daughter has gone and he is worrying about material possessions. He has not made money from Antonio and so the thought of revenge is providing light at the end of the tunnel.

Antonio is a popular character and holds a high position in the social order of Venice. He is not a member of the aristocracy and therefore does not hold the same power as the Duke. The behaviour of Salarino and Solanio shows that Antoniols friendship is a useful thing to have. Although Antonio calls himself a Christian, he has a vicious side. He knows that the laws of Venice will supports him if he persecutes the Jews and he cannot resist acting like a bully towards Shylock. The court is a Christian court: most of the court is therefore against Shylock – he is entering a hostile environment and it is almost a David and Goliath event except for the fact that the law was on Shylock’s side.

Shylock is criticised by the Duke, insulted and called an “inhuman wretch” and “uncapable of pity”. His is addressed “the Jew” by the Duke as a sign of contempt. Shylock is determined in the court scene, even money will not change his mind. The money means nothing to him, he passionately believes that the flesh is his. He knows that he has the upper hand, for once he believes he is in the right. He says that it is his right to have the bond, but only out of hatred for Antonio. Shylock believe he stands “for judgement” and demands the bond.

Portia speaks of the difference between mercy and justice and says that mercy comes directly from god himself. Portia admits that there is nothing they can do to stop him taking the bond, this is seen as a breakthrough by Shylock and says “A Daniel come to judgement!” and praises Portia “…O wise young judge, how I do hounour thee”. Portia asks for Antonio to prepare himself for the knife. Shylock is eager and excited at this and asks to keep to the letter of the bond. When Portia asks to Have by some Surgeon, Shylock, on your charge Shylock says that he “…cannot find it” and it is “…not in the bond” Shylock obviously has no compassion for Antonio and holds him in contempt.

Shylock is at his lowest in this scene. Antonio is willing to except his fate; by contrast Bassiano and Gratiano say that they would get rid of their wives to save Antonio. Portia now turns Shylock’s words against him, as there was no mention of blood in the bond, she insists that he follows the letter of the bond and no blood should be shed whilst getting the pound of flesh. Gratiano repeats “…An upright judge, a learned Judge” (Shylock’s words) in order to mock him. Shylock realises he cannot take the flesh, so he asks for the money, instead. She insists that he take the flesh. He now has to beg for mercy. Although Shylock had tried to kill Antonio the Duke grants some kind of mercy. The point is made by the Duke that Christians are merciful. Antonio refuses to have Shylock’s money and instead insists on it being given to Shylock’s daughter after his death.

The one condition that he is spared is that he must become a Christian. This is devastating to Shylock, he is a broken man. Everything of importance to him has been taken from him. In my opinion this is a very unfair punishment for Shylock, he has already lost his daughter, he loses his money and now he loses all that is his, his religion. Antonio’s choice to make Shylock convert to Christianity is revenge rather than mercy, although Shylock is an evil character despite the fact that his punishment was awful, but then perhaps a little better than death. His means of living has been taken and therefore he will be condemned to poverty and his religion is taken away from him.

Shylock as a Victim and as a Villain. (2021, Dec 07). Retrieved from http://studymoose.com/shylock-as-a-victim-and-as-a-villain-essay 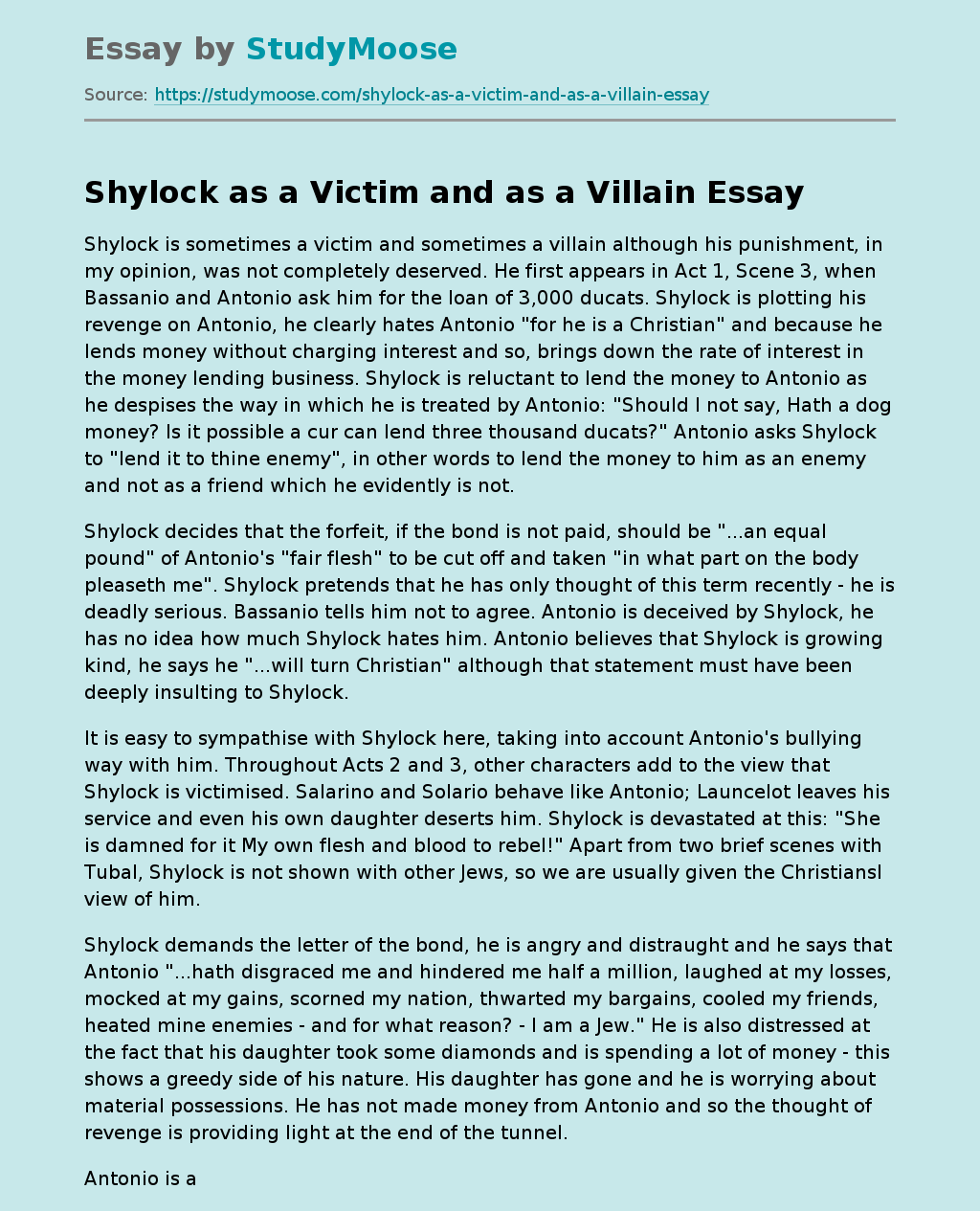