Miss Havisham...A Victim or a Villain?

Was Miss Havisham a victim or a villain? This extremely eccentric character is absolutely essential to the plot of Great Expectations, for with malice intended, she greatly alters the paths of Pip’s and Estella’s lives, and with obsessive behavior destroys her own life.

Miss Havisham was heir to a fortune that had been gained by successful industry rather than noble birth. Miss Havisham’s suitor, Compeyson, was, by social classification, beneath her. The fact that he jilted her and was of a lower station was a double blow to her obviously frail mental state.

Don't use plagiarized sources. Get your custom essay on
“ Miss Havisham…A Victim or a Villain? ”
Get custom paper
NEW! smart matching with writer

Dickens reminds us that even money earned by hard work rather than noble inheritance does not assure happiness.

With this catalytic event, Miss Havisham committed pseudo suicide and confined herself to a mausoleum…Satis House. It is necessary for the reader to know that Miss Havisham’s psychotic behavior began precisely at 8:40 a.m. on what was to have been her wedding day. When Miss Havisham learned that she had been deserted by Compeyson, she was wearing just one shoe.

“She had not quite finished dressing, for she had but one shoe on.” Dickens is emphasizing how suspended in time Miss Havisham remains.

It does not seem a stretch to believe that Dickens was showing us how all of humanity is just one step from insanity. Dickens described Miss Havisham’s surroundings: the court-yard “but grass growing in every crevice,” and the brewery “all was empty and disused.” Metaphorically, the same words describe Miss Havisham and illustrate that a life of revenge is hollow and unattended.

The humiliation and hurt Miss Havisham suffers at the hand of Compeyson causes her to coach her adopted daughter, Estella, in the many ways to break a man’s heart. Incapable of doing it herself from her weakened and aging position, she uses Estella as her weapon of revenge.

I am quite certain that Dickens arrived at Miss Havisham’s name by implementing some combination of words that provided him with a metaphorical laugh. I have my own interpretation; Webster’s Comprehensive Dictionary shares my guilt. One definition of “have” is … “to cause.” “Sham” is also defined as … “something to be pretended other than it is.” To cause a pretension is exactly what Miss Havisham did to Pip by allowing him to think she was his secret benefactor.

Miss Havisham was a victim only because she allowed herself to be. A strong person would have quickly realized that her life would be improved by being liberated from Compeyson, a white-collared criminal. Miss Havisham’s villainy is forgivable; her self-imposed insanity allows us to do that. Miss Havisham is a marvelous diversion for the reader: not quite believable, but oh, so interesting.

Miss Havisham...A Victim or a Villain?. (2016, Jul 03). Retrieved from http://studymoose.com/miss-havisham-a-victim-or-a-villain-essay 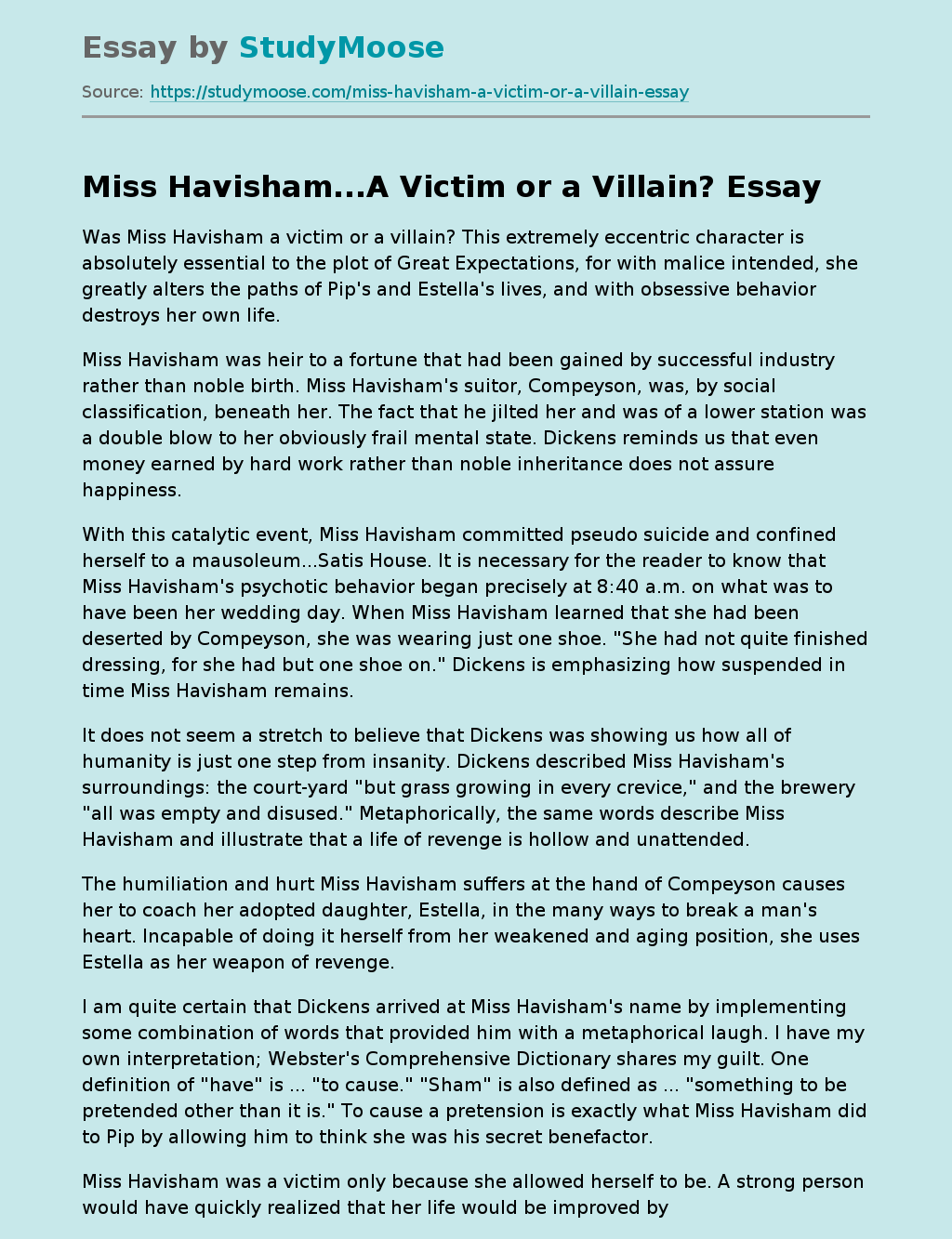