Macbeth: Is Lady Macbeth a Villain or a Victim?

Lady Macbeth is presented by Shakespeare as a powerful dominant character, wanting to be Queen of Scotland, possessing the ambitions of a man but born into a female body. At the time, a prime example of a traditional society female was Lady MacDuff who bore a male heir and was a loving wife but never asked for anything more. Her first entrance is marked by a soliloquy in blank verse with strong iambic pentameters using the language of the witches calling up spirits showing she sees herself as supernatural and in control, ‘Come, you spirits, that tend on mortal thoughts,’ ‘Spirits in thine ear’.

Don't use plagiarized sources. Get your custom essay on
“ Macbeth: Is Lady Macbeth a Villain or a Victim? ”
Get custom paper
NEW! smart matching with writer

Lady Macbeth’s ambition can be seen straight away in Act 1 by her extravagant speeches with detailed imagery commanding her elaborate plan. This image of Lady Macbeth being a powerful force in the relationship, spurring on her husband can be seen in Act 1 scene 7 when she taunts Macbeth about his masculinity in order to get him to act as she pleases to further her ambitious career.

Her language belittles Macbeth and is very different from how Duncan sees him when he promotes him to the Thane of Cawdor as he is clearly perceived to be a strong warrior and an independent man. Lady Macbeth needs to be as strong to ensure her husband goes through with her plan and use the powers of evil to help her influence him to commit the murder.

Duncan treats Lady Macbeth as merely the hostess when he arrives at their home when he says ‘see our honoured host’ also by saying honoured she should be grateful that they have come to see her depicting how women were expected to behave.

Duncan speaks about Macbeth with his full title, ‘Where’s the Thane of Cawdor’ whereas he just addresses Lady Macbeth as hostess. He does not see beyond Lady Macbeth’s persona of a classic wife like Lady Macduff that she portrays herself to be, to lure away people away from her ambitions that would be unthinkable for a woman at that time.

Lady Macbeth says ‘Thou wouldst be great art not without ambition, but without the illness should attend it’ showing that Macbeth is honourable and would want to become King through proper means such as succession as next in line. Shakespeare chose the word ‘illness’ to show wickedness is needed to commit regicide. This shows the extent of Lady Macbeth’s manipulation and cruelty that even her husband a killer himself is not happy to follow her in killing Duncan. These lines reflect Lady Macbeth’s philosophy of how to achieve power, how people must set their human and moral code to reach their ambitions if they are to be as great as hers.

Lady Macbeth is a great manipulator as she delivers great speeches of how evil plays to Macbeth’s worries about killing. Lady Macbeth fears that Macbeth is too honourable to commit regicide even though he is a killer so much so that he gets promoted to Thane of Cawdor for his excellence on the battlefield. Lady Macbeth says to him ‘yet I do fear thy nature’ and ‘that wouldst thou holily’ to show him that he is too kind hearted to follow through with what the witches foretold. However, Lady Macbeth says ‘Had he not resembled my father as he slept, I had done’t’ showing to the audience in an aside that she would be willing to do it herself if Duncan did not resemble her father.

Lady Macbeth, a woman who had never killed before was willing to do it, forcing Macbeth to follow through with the plan so he would not be seen as weak by Lady Macbeth, and unable to do a man’s job. Lady Macbeth

Macbeth: Is Lady Macbeth a Villain or a Victim?. (2020, Sep 23). Retrieved from http://studymoose.com/macbeth-is-lady-macbeth-a-villain-or-a-victim-essay 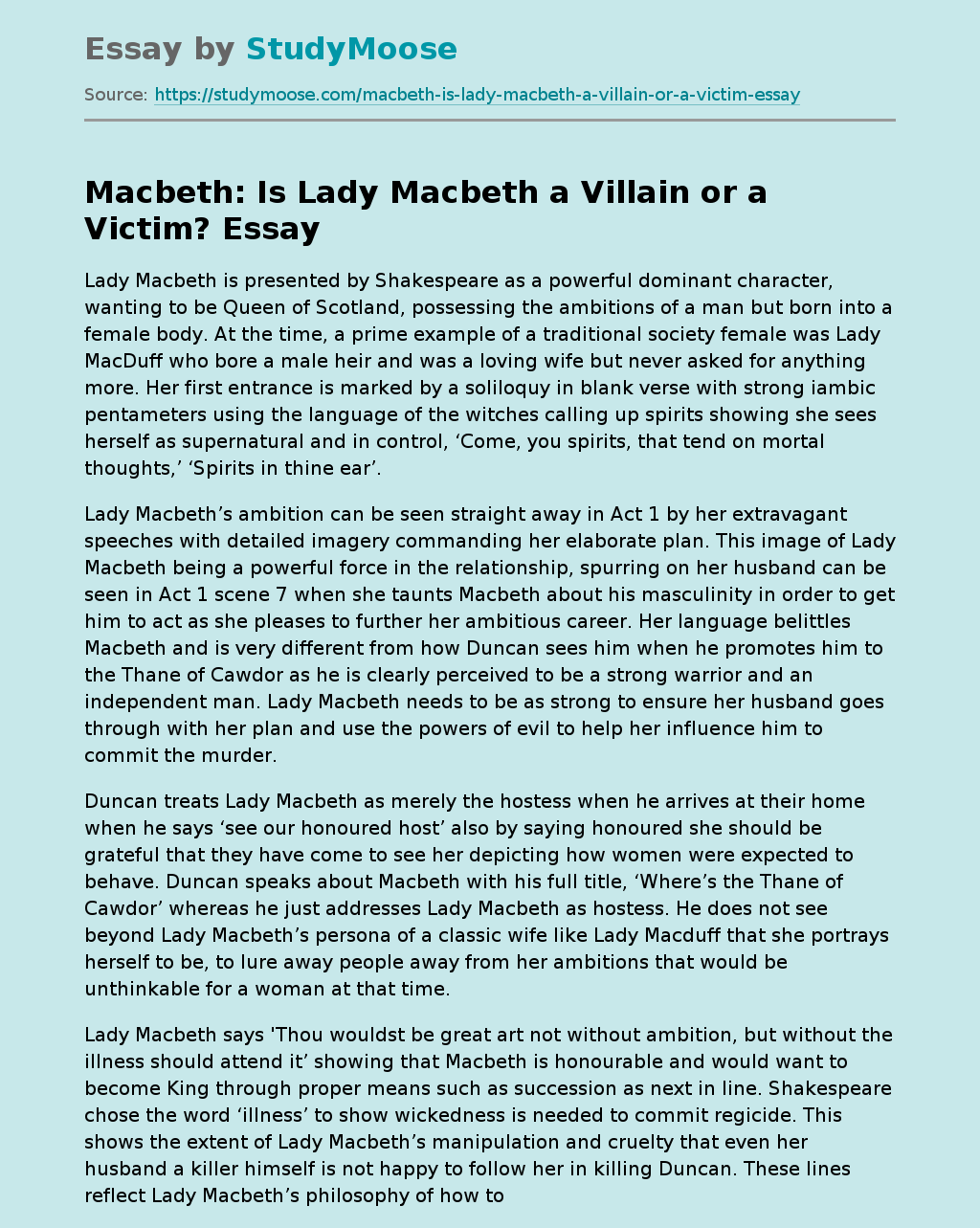