“We must always think about things, and we must think about things as they are, and not as they are said to be” (George Bernard Shaw). These words define how people tend to only view things from the outside, without looking deeper. They do not look past the stereotypes to see things for what they really are. Such is the case of Lady Macbeth in William Shakespeare’s Macbeth. The audience generally views her as a Machiavellian villain. They do not see past the few corrupt incidents that she is involved in, to realize that she is not a heartless criminal, and instead a tragic hero.

The personal qualities she possesses that indicate she is a tragic hero compensate for her villain-like traits.

Lady Macbeth uses her extreme intelligence to plot shady plans to obtain power, much like a Machiavellian villain. However, there are significant signs that she does in fact have a conscious, and therefore she cannot be a villain.

A character flaw she has makes innocent people suffer, but in the end invokes pity in the audience at the time of her death, qualities of a tragic hero. At first glance Lady Macbeth appears to be a Machiavellian villain. In actuality, further analysis proves she meets the criteria of being a tragic hero.

Machiavellian villains are intelligent, clear-headed and focussed. They want power, and will resort to dishonest means to obtain and retain it. Lady Macbeth resembles a Machiavellian villain because she is directed and determined to get what she wants.

She craves power and she strives to achieve it. She never thinks twice about the consequences of her actions. Lady Macbeth wants to obtain power by killing the king. Not once does she think that her plan will fall through, resulting in Macbeth and herself being caught. Lady Macbeth uses deceitful and unjust ways to get the power that she craves. The following explains how she convinces her husband to kill the king, and frame the innocent guards. “The unguarded Duncan? What not put upon/ His spongy officers, who shall bear the guilt/ Of our great quell?”(I.vii.70-72).

Once this is done, Macbeth will be king and she shall be queen. In addition, Lady Macbeth is also very intellectual, another trait of a Machiavellian villain. She is able to conjure up the idea of how Macbeth and herself can acquire more authority. Also, she is very capable of creating believable lies on the spot. During a dinner, Macbeth sees the ghost of Banquo, but only he can see it. Macbeth begins to act crazy. Out of fear of being revealed as murderers, Lady Macbeth makes up an excuse for her husband’s behaviour. She informs the guests, “He will again be well. If much you note him/ You shall offend him and extend his passion/ Feed and regard him not” (III.iv.56-58). She is very rational, and a quick thinker. These qualities signify that Lady Macbeth is quite possibly a Machiavellian villain.

Many of Lady Macbeth’s personal characteristics lead the audience to believe that she is a Machiavellian villain. However, there are some essential traits of a villain that she does not possess. Villains have no moral scruples. Lady Macbeth appears to contain no moral scruples when she makes such claims as, “I would, while it was smiling in my face/ Have pluck’d my nipple from his bondless gums/ And dash’d the brains out” (I.vii.56-58). She says this when she tries to convince Macbeth that killing Duncan is insignificant. From this remark, the audience gathers that Lady Macbeth has no conscious. Yet, “Had he not resembled/ My father as he slept, I had done’t” (II.ii.13-14).

Lady Macbeth uses this as her excuse for not killing Duncan herself, but at the same time reveals she has somewhat of a conscious. Her morals become more evident when she begins to sleepwalk. Sleepwalking usually occurs when an individual is uneasy about past, or future events. Lady Macbeth’s guilty subconscious is causing her to sleep walk, and re-enact the terrible things she is unsettled about. She awakens in the night and washes her hands over and over, trying to get the blood off. The fact that Lady Macbeth has a sense of right and wrong, indicates that she is more likely a tragic hero than a Machiavellian villain.

With more analysis Lady Macbeth starts to take the form of a tragic hero. Tragic heroes have a character flaw which leads them to lose control and make innocent people suffer. Yet, when they die they still evoke pity in the audience.

Lady Macbeth, like all tragic heroes, has a character flaw. She deeply loves her husband, and will do anything for him. She wants him to be great and powerful. When she receives news that he is the new Thane of Cawdor, she was extremely proud of him. Even more so when she learns that a prophecy claims he could be king. She wants to do everything in her power for it to come true for him. Lady Macbeth was the mastermind behind Duncan’s untimely demise. As she says when she refers to Duncan’s life, “O never/ Shall sun that morrow see!” (I.v.59-60). She is the reason that the innocent king dies. As previously mentioned, Lady Macbeth also gets the idea to frame the innocent guards. She has terrible affects on innocent people’s lives, exactly like a tragic hero.

Even though she brings about horrific events, and does great misdemeanours onto others, people still pity her, the way they would a tragic hero. Lady Macbeth is not well, and sleepwalks regularly. She has a waiting gentlewoman looking after her. Growing with worry, the gentlewoman sends for a doctor. Lady Macbeth reveals through her sleepwalking, the treason she has committed. Despite her crime, the gentlewoman still feels sorry for her. She says, “I would not have such a heart in my bosom for the/ dignity of the whole body” (V.i.52-53). The gentlewoman is sincere, stating that she would not want to have a burdened heart like that of Lady Macbeth out of respect for the rest of her body.

The audience also has sympathy for Lady Macbeth. Her guilty conscious becomes too much for her, and she kills herself. Lady Macbeth is only human. Everyone makes decisions, which they regret. The audience begins to emphasize with Lady Macbeth. Suddenly they wish the circumstances were different for her. Accordingly, Lady Macbeth is very much a tragic hero. Her character flaws bring forth suffering to innocent parties, and she still evokes pity from spectators.

Ergo, further analysis is required in order to perceive Lady Macbeth for the tragic hero she really is, and not the Machiavellian villain she appears to be. She is at first assumed to be a Machiavellian villain because she is clearheaded, intelligent, and uses dishonest means to achieve power. Thereafter, it is questionable to whether Lady Macbeth has a conscious, a factor she cannot possess if she is a villain. Consequently, it is determined that Lady Macbeth is a tragic hero. A character flaw, her love and extreme loyalty to her husband, brings about misery to innocent persons. In spite of the wrongdoings she does, she is able to induce pity on the audience.

These factors are all qualities of a tragic hero. In regards to the words of George Bernard Shaw, we must always think about things for what they really are. If Lady Macbeth had not been further examined, she would only have been seen as a heartless villain, because that is what she appears to be. Lady Macbeth is truly a tragic hero, and should be viewed as such. It is important not to judge people by first impressions, but to look past that and see them for what they really are. It is impossible to see the reality of a situation, if you never open your minds eye. 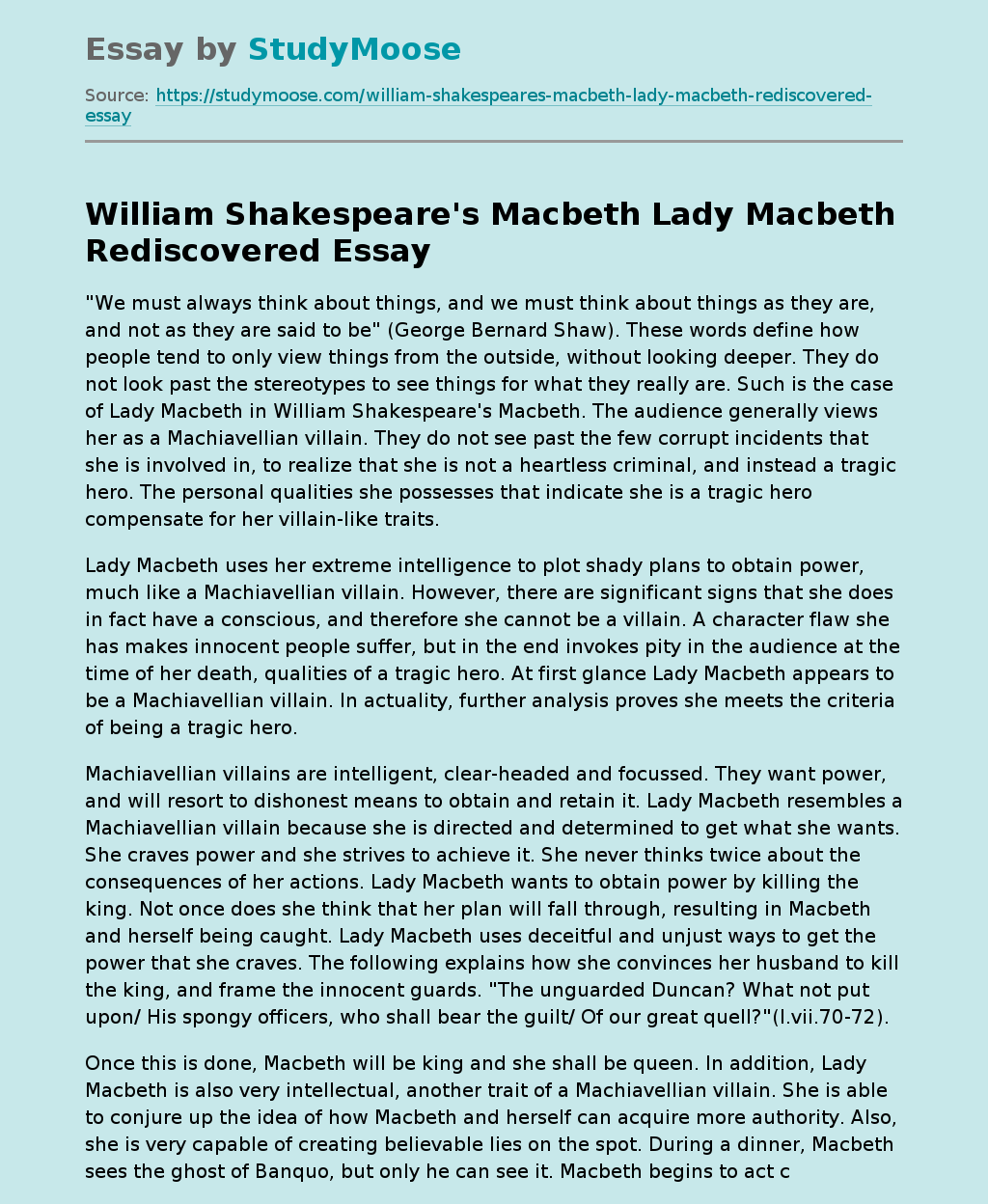