How does Shakespeare present Lady Macbeth?

Shakespeare’s Lady Macbeth begins as a strong, ruthless, manipulative character and dies as a vulnerable, guilt-ridden, weeping woman. This was more typical of the view of women prevalent in the 17th century, which was that they were not the dominant gender.

Shakespeare presents Lady Macbeth in Act 1 scene 5 as wanting to be more manly and stronger. Lady Macbeth wants to be brutal, cruel and non-feminine, calling on the spirits to “unsex me here” because she doesn’t believe that, between her husband and herself, there is enough manliness and brutality to supporting her plan to murder the King.

Don't use plagiarized sources. Get your custom essay on
“ How does Shakespeare present Lady Macbeth? ”
Get custom paper
NEW! smart matching with writer

The prefix ‘un-‘ comes up quite frequently in the play. For example, in Act 1 scene 3, where Macbeth says “unfix my hair”, “un” meaning out of place. This was a big theme in the Jacobean era since everyone was believed to be part of a hierarchy and they all stood in their places, ranking from animals all the way up to kings and queens.

People would have never dared to have stood one step out of their ranks, so this scene in the play was a very unexpected, shocking one for the audience. Also, the adverb ‘here’ can state that Lady Macbeth wants her gender and beliefs about women taken away at that specific time. When Lady Macbeth says “Make thick my blood”, backs up the fact that she wants to become more brutal. Shakespeare’s use of the phrase ‘Make thick’ creates a feeling that Lady Macbeth is being quite demanding and expressing power.

Also, the fact that this was said within a short, monosyllabic sentence confirms this is the emotion Shakespeare wishes to convey to the audience.

Lady Macbeth is presented as a strong woman who is very organized. For example, she even organizes the murder of King Duncan: “I laid the daggers ready: He could not miss’em”. The verb ‘ready’ proves that she has had this plan rehearsed, so the event of something going wrong is very unlikely. Shakespeare’s use of a balanced sentence structure gives the Jacobean audience the impression that Lady Macbeth organized the plan so Macbeth could definitely notice them; Macbeth seems like a servant in the crime as he is just being told to do something, and he does it. In Jacobean times, women would usually do whatever the male in the situation tells them to do, which results in the men being the dominant ones in the relationship. Despite that usually happening, Shakespeare has written the play to present Lady Macbeth as a strong woman with male characteristics – this would have shocked the audience, and would be a step into the unknown for them.

As the play progresses into Act 2, Lady Macbeth is portrayed as wanting everything to be just so. This is because of her constant fear of not wanting to get caught being involved in the death of King Duncan. Lady Macbeth’s plan was to leave the daggers at the murder scene so it gives the impression that the drunken guards were the responsibility for this wrongdoing. Lady Macbeth calls her husband “infirm of purpose”. The word “infirm” in context means that Macbeth is unsteady, shortly followed by “purpose” meaning, the deed that he has done. Macbeth was scared and he was regretful for it.

Lady Macbeth has become what she said she would not, overwhelmed and guilty. In Act 5 scene 1, she has been seen and heard sleep walking around the royal castle. Lady Macbeth unconsciously was having conversations with herself about the night of the murder of King Duncan, and Macbeth killing him. Lady Macbeth exclaimed “out damn’d spot”, a phrase which proved her guilt for the deed. She further goes on about Macbeth’s bloodstained hands, and that guilt takes more than an ocean to wash off. Lady Macbeth doesn’t just have stained hands, she has a stained conscience.

To conclude, Shakespeare has presented Lady Macbeth very differently from the expectation of how women should have acted in the Jacobean era, having the men rule over them: he has shown her to be more brutal and manly. I feel like everything that eventually happened to Lady Macbeth, she had brought it upon herself. Shakespeare conveys this by demonstrating that one’s deed of brutality can lead to a depressed, guilty woman then killing themself- as in Lady Macbeth’s case.

How does Shakespeare present Lady Macbeth?. (2020, Oct 16). Retrieved from http://studymoose.com/how-does-shakespeare-present-lady-macbeth-essay 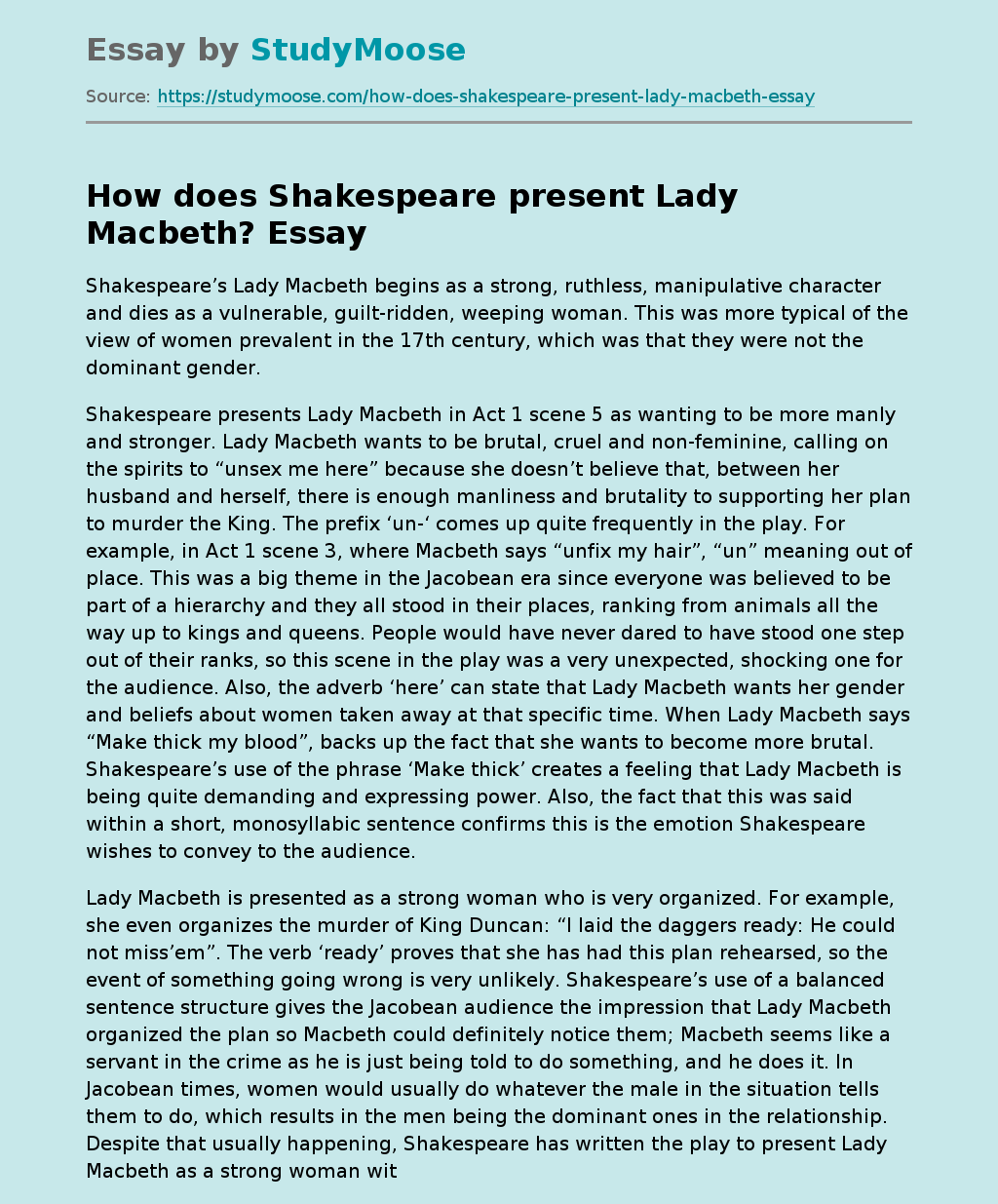