Who is the Greater Villain Macbeth Or Lady Macbeth?

Assignment Details: – Compare the characters of Macbeth and lady Macbeth and say who for dramatic purposes is the greater villain.

I believe that Macbeth is the great villain but Lady Macbeth is greater than he. This is because she is pure evil and very persuasive as she is able to influence and force Macbeth into killing his friend and King Duncan. In order for the prophecies made by the three weird sisters in the beginning of the play (when they say that Macbeth shall become King, Thane of Cawdor and Glamis) would happen a lot quicker than they should have done.

Don't use plagiarized sources. Get your custom essay on
“ Who is the Greater Villain Macbeth Or Lady Macbeth? ”
Get custom paper
NEW! smart matching with writer

Macbeth and Lady Macbeth have an argument, where Lady Macbeth contradicts his villainous character and integrity by calling him weak minded because he refuses to Kill Duncan. Yet, she still manages to persuade and corrupt him into killing the king, proving that through her evil-mindedness she is able to convince a loyal soldier into killing the King.

It is clear from their character profiles and the play that Lady Macbeth is manlier than her husband at heart and is prepared to do anything to get what she wants in life even if it means murder.

To me it seems that she doesn’t want to get her hands dirty and the fact that Duncan resembled her father was just a cover up and that the true reason for not killing was to keep her hands clean.

She was angry when Macbeth returned to her with the daggers he used to kill Duncan in his hands covered in blood.

After having another argument with Macbeth, Lady Macbeth takes the knives and smears Duncan’s guards with the blood and places the daggers in their hands. She is pure evil. Macbeth definitely isn’t the greater villain because before killing Duncan he kept getting visions of the dagger, which shows that he is mentally unstable due to the murder. In addition, it would seem as though he has a checklist in his mind of the way he should achieve his goals and aims in life. (Similar to the one below)

*Every thing must be done fairly.

I am led to believe this because when he is told of his fate by the three sisters he is adamant that he will let fate take its course and wait for Duncan to die before becoming king. When his wife suggests murder, they have an argument during which she calls him weak because he refuses to kill Duncan. This shows that he wanted to wait for Duncan’s time to die to come either through illness or battle. Macbeth seems to be weaker than his wife, which is probably why she managed to coerce him into killing his friend and king because if he was strong and didn’t want do it he wouldn’t have been convinced by Lady Macbeth insulting him.

It is clear that he is weaker than his wife because he didn’t want to kill the king but wasn’t strong enough to convince his wife it was wrong. Although Macbeth had thought about turning against Duncan he couldn’t do it because of his “check list” Lady Macbeth removed this from his mind making him change his mind and finally convincing him to do the deed of killing the King.

We know as a fact from his reputation that Macbeth is a ‘great’ soldier and powerful leader who has earned respect and honour on the battlefield. This is confirmed when he is granted the title ‘Thane of Cawdor’ by king Duncan, also he was “Thane of Glamis” prior to this after being granted “Thane Of Cawdor” his title was “Thane of Cawdor and Glamis”.

To be known as a good soldier Macbeth must have shown qualities like courage, fearlessness, physical strength and loyalty to the throne. Most importantly, Macbeth is an ambitious and personally vain man. This is made clear by his reaction to the witches and the prophecy that they give him. Macbeth instantly believes their rantings to be true possibilities of his future. He may not be intelligent as this is not important quality in a soldier, but Macbeth is certainly superstitious and willing to be led on by three old hags.

Macbeth appears to be unstable; there is clear evidence that he loses nerves and focus under pressure. For a soldier like him this shouldn’t be normal behaviour. This can be seen in his attitude when he goes to kill Duncan and when he sees Banquo’s ghost at the banquet. Macbeth truly loves his wife in his own way. When he finds out, she is dead he feels regret and remorseful, showing true love and emotion for his wife.

Lady Macbeth is an independent woman of great strength who easily takes charge of a situation. She is in charge of her own life and often Macbeth’s life. Lady Macbeth is willing to do most things, including kill her king and frame his guards, in order to advance her husband’s future and become Queen of Scotland.

Lady Macbeth is both strong and manipulative, in order to get her own way. She proves this when she convinces Macbeth into killing Duncan. It was her plan; she framed the guards and finished the job when Macbeth lost his nerves. I think that she holds the power behind the crown. I also think that she should be the Monarch of Scotland because she has great leadership qualities.

The audience’s image of her changes when her guilt starts to take over and she regrets the actions that she and Macbeth have taken. As I said earlier Lady Macbeth has unbelievable character strength from the moment, she gets the letter from Macbeth. She wasted no time in planning Duncan’s death as she calls on evil spirits to help her commit the crime. (Act1: Scene 5)

Take a look at Lady Macbeth’s ‘unsex me’ speech in Act 1: Scene 5. I specify this scene because this is where we see Lady Macbeth’s pure evil. No good person would want the forces of evil to help her commit the murder of a king, because of the divine right of kings supposedly handed down from God they wouldn’t want to kill a king anyway, as it would of seemed as an offence toward God.. The speech is very important because it shows how desperate she is to become Queen and Macbeth to be king. She would even have evil spirits take away her womanhood. Act 1: Scene 5

“The raven himself is hoarse

That croaks the fatal entrance of Duncan

Under my battlements. Come, you spirits

That tend on mortal thoughts, unsex me here

And fill me from the crown to the toe

That no compunctious visitings of nature

Nor keep peace between

The effect and it. Come to my woman’s breasts

And take my milk for gall, you murdering ministers,

Wherever, in your sightless substances,

And pall thee in the dunnest smoke of hell,

That my keen knife see not the wound it makes,

Nor heaven peep through the blanket of the dark

At the end of this speech I think the audience would be looking at Lady Macbeth in shock horror, disappointment, and some members of the audience might be thinking that she was brave to make such a request to evil spirits just in case they turned her into a man or killed her. The atmosphere is like that of a scene from a horror film when something is about to happen the music played also creates a sense of anticipation. Shakespeare uses shock horror to frighten his audience, as well as the impossibility that any woman could replace her breast milk for gall and call upon evil to help her commit a murder.

Another important scene is when Macbeth makes his speech in Act: 2 Scene: 1.

This scene must have had great audience responses when performed as a motion picture or play. This is because of the way that Macbeth grabs the imaginary dagger and the words Shakespeare uses e.g. “is this a dagger I see before me” and “come let me clutch thee”.

My conclusion is that Lady Macbeth is much stronger in mind than Macbeth and that she is pure evil. The fact that murder is wrong doesn’t even appeal to her, proves this theory correct, she even ignores the divine right of kings and convinces Macbeth into killing Duncan. On the other hand Macbeth appears to be stronger minded than he actually is. In actual fact he is a weak minded individual who has no control over his life. He would have made a very lousy king; he couldn’t even keep rule over his wife let alone the entire population of Scotland. Thus he couldn’t possibly be the greater villain. He might have killed Duncan and had Banquo killed but this shows nothing.

He couldn’t even do the job properly when it came to killing Duncan; Lady Macbeth had to go back and frame the guards. If Macbeth were truly a great villain, he would’ve killed Banquo himself. He knew that he wouldn’t be able to cope with the burden on his head so he hired two murderers to do it for him. He could just about cope with killing Duncan.

The dagger that he used to kill Duncan haunted him before the job was done; he couldn’t cope with having Banquo killed. Macbeth is definitely too weak to murder unless he is coerced into doing it. Moreover the man was too weak to say no to his villainous wife. Lady Macbeth is definitely more evil than Macbeth because she called on evil spirits to make her manlier so that she could kill Duncan. She convinced Macbeth to kill Duncan; she planned the assassination from the moment she heard the prophecy.

Evidently, lady Macbeth is the greater villain with Macbeth at her side.

Who is the Greater Villain Macbeth Or Lady Macbeth?. (2017, Oct 21). Retrieved from https://studymoose.com/who-is-the-greater-villain-macbeth-or-lady-macbeth-essay 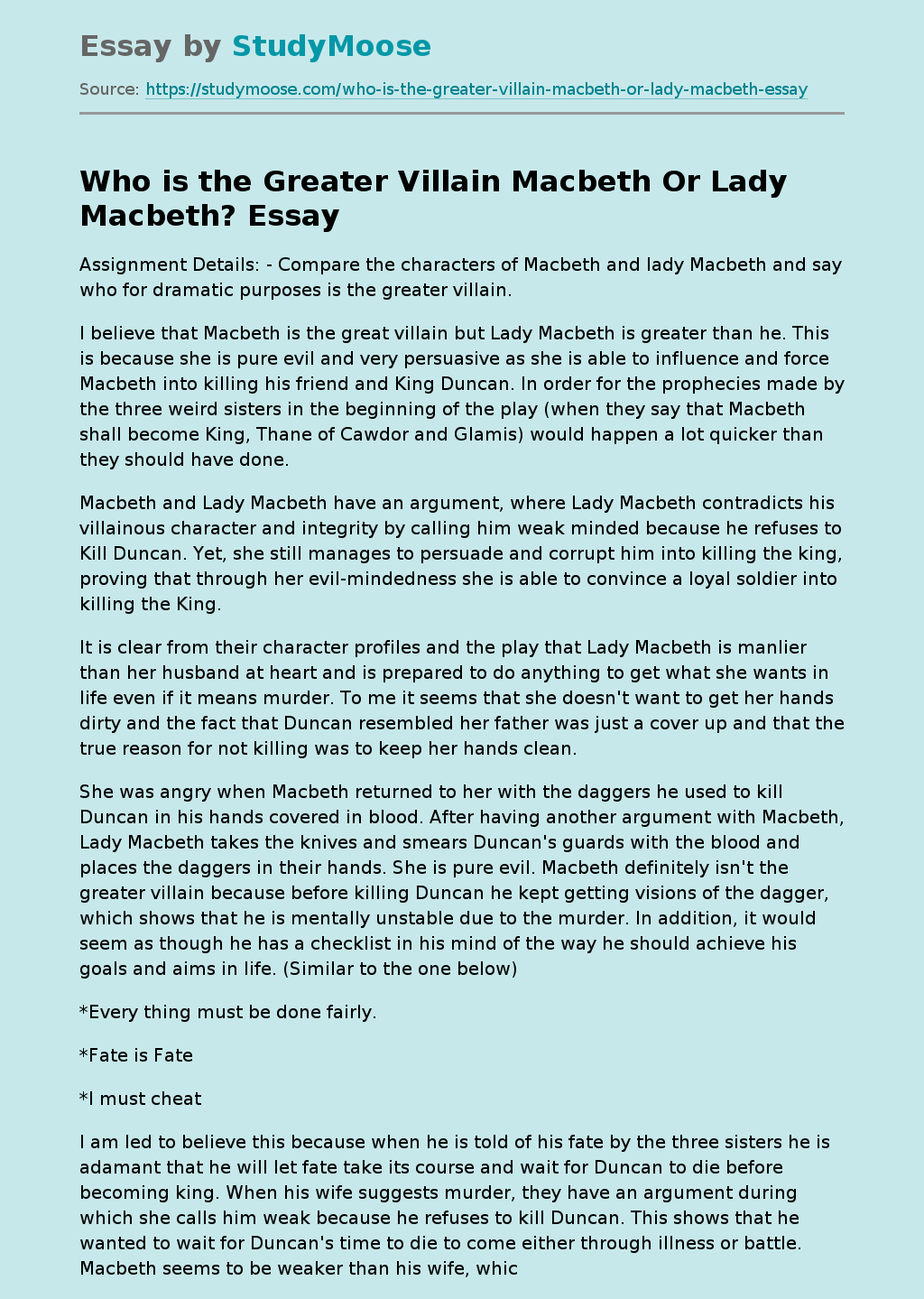