The quest for the elixir of life has been going on throughout history. In every civilisation, there are myths which depict heroes and heroines who live long lives, some even forever. There is also recorded history of men and women, called alchemists, who experimented to discover means by which people could live forever; or at least for very long times. Mod¬em medicine too aims to prolong lives – often even of very sick per¬sons with no hope of recovery from their ailments.

Don't use plagiarized sources. Get your custom essay on
“ Is greater life expectancy always desirable? ”
Get custom paper
NEW! smart matching with writer

In fact, one of the signs of a progressive nation is when its statistics show that its popula¬tions has a high life expectancy; that is that they can live longer than their forefathers. The longer the life expectancy of a nation; the better that nation. All these show that it is in the human consciousness to want to live for a long period of time. The question now is whether this is always desirable.

Life Expectancy for Individual vs Society

Seen in the light of the individual, longer life expectancy certainly seems desirable.

Almost everyone would like to live and enjoy life longer. Hu¬mans have generally shown a reluctance to die and leave this beautiful world and their loved ones. This is in the survival spirit with which every person seems to be born. Almost all of us want to prolong our lives and live as long as we can. However, there is a condition to this. We also want to live well. If we are in dire economic consequences or incurably ill or in great suffering, we would not want to live too long, as doing so will prolong the difficulty and pain.

Usually, we say that life expectancy has increased, in a society, with reference to statistics. These are likely to be simple and just show that over a number of years, people are now living longer. There is usually no reflection about the quality of life that has been lived by the people who now live longer. The statistics show an average without saying which of the people who have lived longer have lived disease-free lives and which have lived lives of comfort and happiness. It is possible that some of the people who have lived longer lives have actually lived miserably in retirement homes where the doctors have tried their best to make sure that the retirees live as long as possible. If by longer life expectation we mean that people live longer, but with no improvement in the quality of their lives, then it would be much better if we do not have a longer life expectancy. In such cases, longer life expectancy would be undesirable. It would be better to live shorter but happier lives than have one’s life prolonged, to suffer and die slow, lingering and painful deaths.

Another consideration about greater life expectancy is about the effect it would have on society. Unless longer life expectancy also brings about with it greater health, there is going to be chaos. If people live longer, it could mean that it would take them longer to live out their old age. This means dependence on the younger population. The younger and health¬ier generation, or indirectly the state, has to support the older. In fact, there have been forecasts that as time goes on there will be more old people in proportion to the younger. If this is a consequence of greater life expectancy, it will place a strain on the younger people as they would have to look after their parents and grandparents while they themselves struggle to make a living.

The final thing to consider is whether there will be overpopulation if there is greater life expectancy. It is easy to see that the earth’s resourc¬es are not limitless. There may come a time when there are too many people in the world to be able to survive. On the other hand we cannot rule out the possibility of earth colonies on the moon and perhaps even other planets. This seems to be a possibility in a century.

In conclusion, though it is apparent that greater life expectancy is a good thing, there are certain conditions that should go with it. The most important thing is the ability of the people to live longer lives indepen¬dently. There is also the consideration of the earth being able to support the larger number of people living on it. 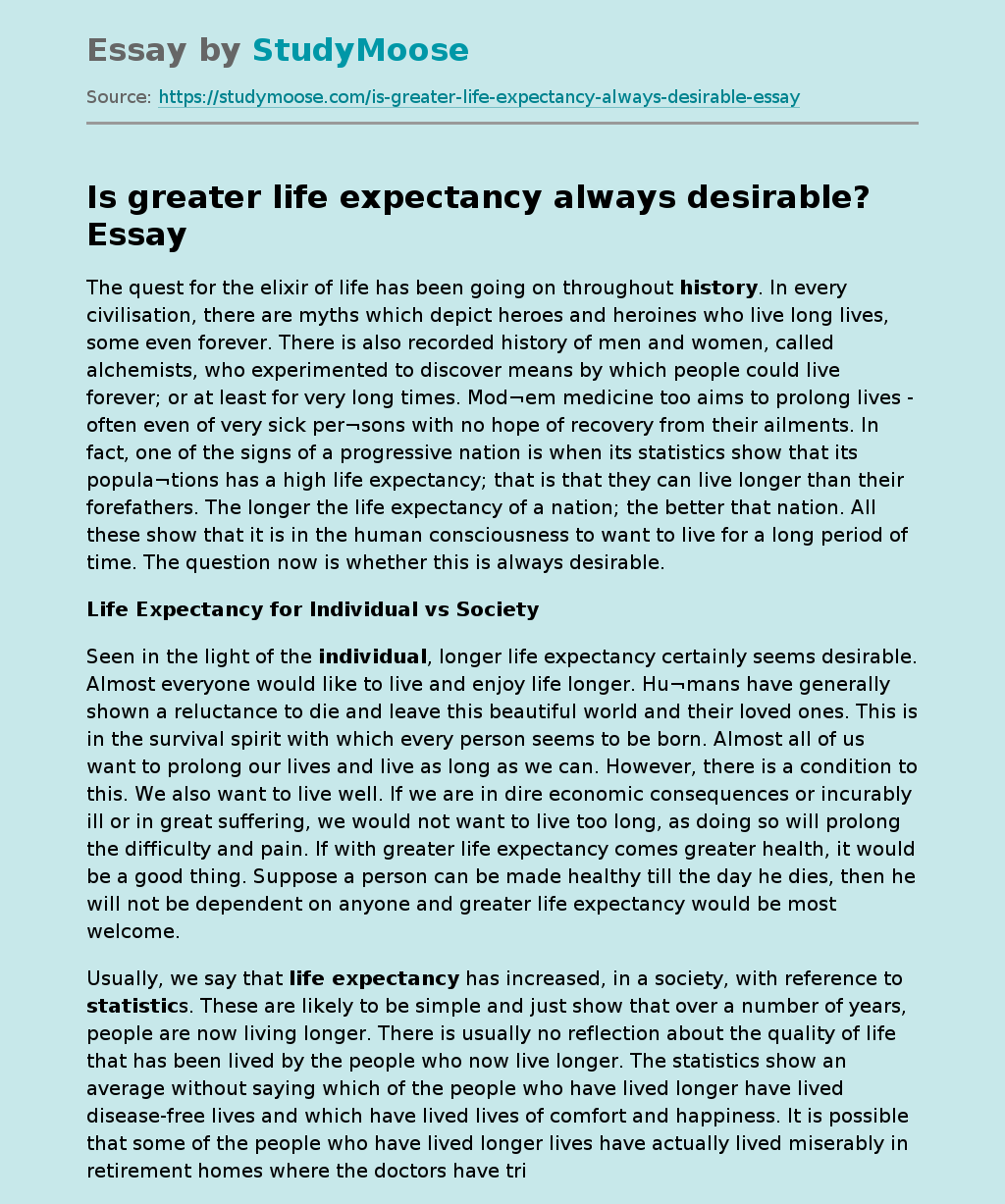