Motivation Explain Adams equity theory Adams’ equity theory is a motivational model that attempts to explain the relationship between what an employee puts into their job (input), what they get out of it (output) and the fairness and justice exchanged between the two (Cosier & Dalton, 1983). Inputs include all factors that are perceived as necessary to obtain a return, such as effort, loyalty, hard work, commitment, skill, ability, flexibility, tolerance, determination, heart and soul, enthusiasm, trust in the employer and personal sacrifice.

Don't use plagiarized sources. Get your custom essay on
“ Equity & Expectancy Theory of Motivation ”
Get custom paper
NEW! smart matching with writer

Whilst outputs include all factors that are seen as a return of the job such as financial rewards, perks, benefits, pension arrangements, recognition, reputation, praise, interest, responsibility, travel, training, development, sense of achievement and promotion (Cosier & Dalton, 1983). A fair and equitable balance of the two are based on the employees own perception, thoughts and beliefs and are formed through comparing the employees own situation with other employees in the market place along with opinions and comparisons from colleagues, friends and partners (Kreitner & Kinicki, 2010).

Ultimate Software has been able to provide an equitable balance between the inputs and outputs of their employees through implementing some of the key principles of equity theory.

For example they are providing a strong leadership role model through Scott Scherr-the CEO, they are being attentive to their employees’ perception of fairness and more importantly they are involving their employees in the decision making and policy process. In return this has promoted cooperation and team work within the company (Kreitner & Kinicki, 2010). More specifically Ultimate Software application of being attentive and involving their employees was demonstrated when their employee suggested that they offer paid adoption leave to their employee and they consequently implemented the benefit (Kreitner & Kinicki, 2010). This particular employee was about to adopt herself so she perceived that the output of “adoption leave” was a fair and equitable reward for her inputs of effort, loyalty, commitment, skill, ability and work (Cosier & Dalton, 1983). Thus by listening and implementing her suggestion Ultimate Software met her sense of fairness. In addition they also conveyed to her a sense of involvement with the decision and policy making process.

Consequently the employee regarded Ultimate Software as a fair, observant and appreciative employer. So much so that she has remained with the company for four years and has since used the “adoption leave” again. Conversely the company could have chosen not to listen to this particular employee’s suggestion. As a result Ultimate Software would not have implemented adoption leave and the employee would have felt that her inputs of effort, loyalty, commitment, skill, ability and work were out-weighed by her received outputs. This would have been even more apparent if another company in the industry offered such a leave for adopting children. Consequently the employee would have felt underappreciated and would have become demotivated. This would have resulted in the employee reducing their effort and application, and even seeking an alternative job, perhaps one where adoption leave was available (Cosier & Dalton, 1983).

Another example of the principles of equity theory at work in Ultimate Software is the use of benefit schemes to motivate employees. These schemes endeavour to provide employees with working conditions and policies that give additional rewards above and beyond the basic requirements to meet the perceived outputs of different individuals (Katzell & Thompson, 1990). For example an employee who perceived education as a fair and equitable output to their inputs is able to benefit from the company’s annual tuition reimbursement. Whilst an employee who perceives providing health cover for themselves and their family as an equitable output for their input will acquire a sense of fairness and organisational justice through the use of Ultimate Software’s fully paid health premium scheme.

These, along with the other schemes mentioned, cater for the differing perceptions, values and sensitivities amongst the company employees. This variation exists because what one employee sees as an adequate reward for their input may not even register with another employee (Blakely et al, 2005). We all have differing sensitivity and to achieve organisational justice and fairness between the inputs and outputs of individual employees the company needs to comprehend what makes their employees tick to enable them to perform their role (Wilson, 2005).

Basically Ultimate Software has applied the principles of equity theory to motivate their employees. The company has provided outputs which meets their employees perception of fairness against what they input into the company (Katzell & Thompson, 1990). This balance between input and output has not only been achieved individually but also with in the work place and the industry. Consequently Ultimate Software has raised the level of employee satisfaction and performance.

Explain Vroom;s Expectancy Theory Vroom’s Expectancy Theory is another motivational model but slightly more complex in its application. The model uses the three variables expectancy, instrumentality and valance to explain how an employee is motivated to behave in ways that will produce a desired combination of expected outcomes (Kreitner & Kinicki, 2010). The first variable, expectancy is the belief that an ones effort will result in the attainment of desired performance goals and is based upon the employees past experiences, self-confidence and the perceived difficulty of the goal. The second variable, instrumentality is the belief that one will receive a reward if the performance expectation is met and is connected to the employees’ levels of trust in leadership, control over rewards and the company’s formalised policy. The final variable, valence is the value that one places on the rewards and is based upon an employee’s needs, goals, values and sources of motivation (Lee, 2007).

It is Vroom’s belief that these three variables interact psychologically to create a motivational force that will cause employee to acts in ways that will bring pleasure and avoid pain (Pearson & Hui, 2001). An example of Ultimate Software using the principle of expectancy theory to motivate their employees is through the use of their education benefit. For this to be a motivational force the three variables of expectancy, instrumentality and valance must be perceived by the employee to be met (Pearson & Hui, 2001). That is to fulfil expectancy an employee will need to believe that their extra effort and time put into studying a degree, or similar educational course, will result in them completing the program. To fulfil instrumentality the employee must believe that once completed they will be rewarded with either a higher pay and or a promotion within the company. And finally to fulfil the third variable valance, the employee will need to value that the pay rise and/or promotion are important enough to apply extra effort and time. Basically they will need to desire the outcome enough so that they will achieve it (Pearson & Hui, 2001).

Jose Chinea of Ultimate Software was able fulfil the three variables of expectancy, instrumentality and valence. Firstly Jose believed that the masters’ degree in management and information systems was achievable. Secondly he believed that the extra effort put into studying a master’s degree would lead to the reward of obtaining a promotion with Ultimate Software. And finally because he personally understood and valued education as an opportunity to grow he therefore believed that the efforts he put in, along with the rewards obtained from Ultimate Software, would be worth it. Conversely, if Jose was not able to fulfil any one of the three variables then there would be no motivational force for him to study and therefore use the educational benefit. This would happen only if he believed that he was unable to complete the master’s degree, the company was not offering a suitable reward and he perceived education and the rewards of education to be of no value. Consequently, the internal attributes of the employee which incorporate their attitude and value systems are an extensive determinate of motivational force in the expectancy theory model (Pearson & Hui, 2001).

Another example of Ultimate Software using the principles of expectancy theory is the CEO’s, Scott Scherr’s leadership role (Isaac et al, 2001). Scherr adopted the principles to equip himself with tools to influence the psychological process resident in his employees. He implemented rewards systems that are uncommon. These rewards include matching 30% of employee superannuation contributions and also stock options and both are applied in an appropriate fashion to pull or influence his employees. This strategy enhances the level of personal motivation of his employees as they wish to maximize their own self interests. For example an employee who wishes to boost their retirement savings would opt for the reward scheme of matching superannuation contributions. Whilst an employee who wishes to boost their immediate wealth, or even just considers investing to be of value, would opt for stock options.

In applying a strong leadership style Scherr has created an environment within his company that inspires his employees to achieve a level of performance that meets the company expectations, and even perhaps exceed the employees own personal expectations. This has been achieved through Scherr consciously choosing a leadership strategy that pulls rather than pushes (Isaac et al, 2001). The positive implications of using a motivational model such as expectancy theory include reduced employee turnover, improved morale and higher productivity (Pearson & Hui, 2001). For Ultimate Software this has resulted in the company obtaining the title of best medium company to work for in America. 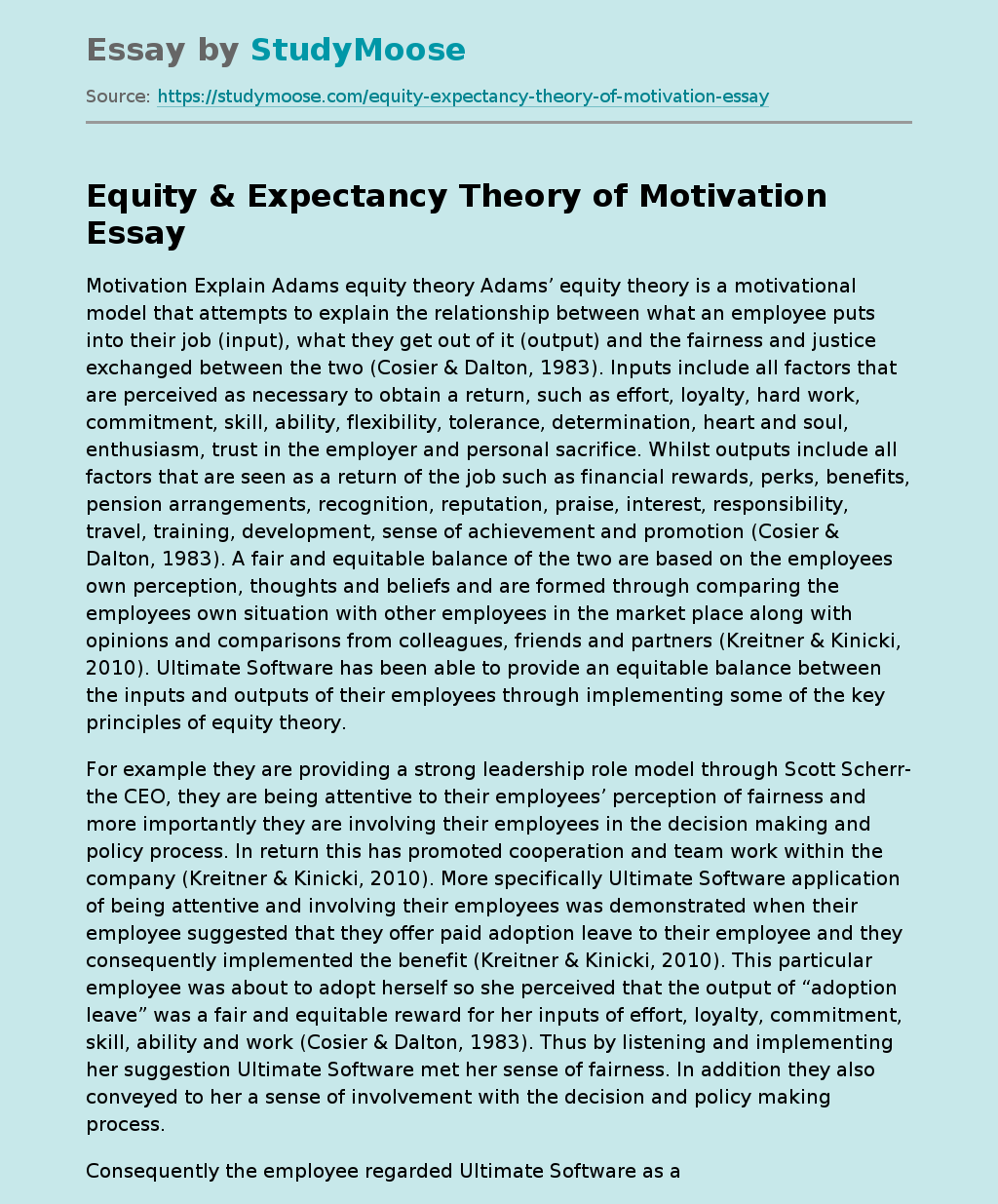