As the cliche goes, no man is an island. Everything man does is influenced by other men and his environment. Be it in school or at work, the reason why people persevere lies on the desire to achieve a certain goal. Hence, motivation is essential to keep the drive of doing things passionately and effectively. However, the enthusiasm to sustain the dream and keep the motivation alive can be tampered by life’s uncertainties. Given the unique characteristics that each student possess, the amount of effort exerted by an average student does not always equal the amount of effort exerted by an outlier in class, yet the results are the same or sometimes exceeded by the outlier.

Turn in your highest-quality paper
Get a qualified writer to help you with
“ Equity Theory of Motivation ”
Get high-quality paper
NEW! AI matching with writer

Perhaps there are instances when studying overnight and not studying at all yielded the same result. These situations affect the level of motivation a student harness when studying. The feeling of unfairness affects how he/she will prepare for the next exam. In the workplace setting, motivation is likewise an important factor to increase productivity.

For example, an employee who worked overtime to get the job well done vis-a-vis an employee who slacked off and produced a mediocre output both received the same salary and the same praises from their boss. The hardworking employee might feel wronged upon seeing how his extra effort was overlooked. To give justice to the unfairness he feels, he opts to mimic the other employee, thus also producing a mediocre output. The equity theory of motivation, developed by workplace and behavioral psychologist John Stacey Adams in 1963, is grounded on the concept that employees tend to seek equity or balance in the amount of input they give to their job or relationship with their bosses, and the output they receive.

The inputs referred in this theory include college degree, hard work, effort, committment, ability, adaptability, determination, flexibility, skill, loyalty, tolerance, enthusiasm, trust in superiors, support from colleages, personal sacrifice and the like. On the other hand, outputs come in the form of financial benefits like salary, bonuses, and perks, and also intangible benefits such as recognition from superiors, praises, responsibility, job security, good reputation, sense of achievement, personal growth and the like. When an employee’s inputs outweigh his or her outputs, he or she becomes demotivated and unhappy. To achieve equity, the behavioral response is to balance out the input-output equation by asking for an increase in the output side, or simply diminishing his or her input. The state of equity lie on the perception of an employee in relation to another employee’s input and output ratio, which shows that employee motivation is subjective nature. However, an employer or manager’s role of keeping employees motivated should not be deterred by this notion. Instead, understanding the sources of employee dissatisfaction and demotivation can help managers address the issues surrounding the workplace to allow for a more productive and work-conducive environment.

The equity theory is more commonly known as the social comparison theory or the inequity theory since an employee compares his input-output ratio with another employee’s input-output ratio to determine equity, and an employee who feels inequity or unfairness reduces this through his behavior and attitude towards work. The “exchange relationship” between work and compensation in comparison with a colleage draws forth discernment of what is fair and unfair. To grasp the intuition behind the theory, four objects must be present which include the person, whose aim is to reduce whatever inequity feeling he or she has; the comparison to other, which pertains to the benchmark person from whom equity and inequity is determined; the inputs and the outputs. According to the theory, a person first compares inputs and outputs with a comparison other, then determines if there is inequity or unequal input/output ratio between himself/herself and comparison other. Basically, the theory assumes that an individual addresses his/her inequity feeling after comparison to others, and remains at the level where equity is achieved. Several ways a person does in reaching equity include altering his/her inputs, altering his/her outputs, distorting his inputs and outputs cognitively, finding a new job, or changing the person of comparison. (Gogia, 2010) In line with this, Huseman, Hattfield and Miles (1987) dissected the equity theory into four basic ideas. First, the notion of fairness is conceived through comparing an individual’s input and outcomes ratio with others. The other does not necessarily require a colleage, because it can also be his/her old self. Comparing the amount of effort exerted and the amount of salary received to a colleage’s or an old job facilitates the judgment of what is fair to an individual. Second, if the compared ratios are not equal, then there is inequity.

The two kinds of inequity are underpayment inequity and overpayment inequity. Underpayment inequity happens when an individual deems that his/her ratio is smaller than others, or in other words, his great effort mismatches with the benefit received as compared to another employee. On the contrary, overpayment inequity occurs when a big compensation is received from the little effort exerted, as compared to other coworkers. Third, the greater the difference in inequity, the greater tension and distress the individual feels. The different attitudes people have toward life’s unfairness in general brought about the three kinds of equity-sensitive people namely the benevolents, the equity sensitives and the entitleds, with the benevolents being the most tolerant of underrewards, and the entitleds having the most preference of over-rewards. The equity sensitives just want their ratio to be the same with others, but the entitleds believe that the world owes them, so it is just rightful for them to receive more. Forth, the more intense feeling of tension brought about by inequity, the harder an individual will work to restore equity. This is just like how a more oppressed victim is more thirsty he is to seek justice, if not revenge. The ways in achieving equity varies from person to person. Upon experiencing the feeling of unfairness, the assumption of this theory is that employees will find ways to reduce inequity. The two most typical ways are through behavioral options and cognitive options, where the latter is used more often used since it is both less riskier and easier to do than the former. For behavioral options, the employees change their input to match outcomes like slacking off or leaving work early, changing outcomes to match input by asking for an increase, or perpetrating a crime like theft or fraud, persuading others to change inputs by complaining to superiors, and withdrawal through tardiness, absenteeism or quitting the job. As for the cognitive options, the employee distorts his own inputs or outcomes by underestimating his own performance so that the inputs will match the output; distort the inputs or outcomes of others by thinking that others earn more because they probably deserve it; change the comparison others by choosing a different benchmark for them to feel better. (“Motivation theories”, 2009) Applying this theory in the government office place gives a clearer understanding as to why in general, government employeees are unmotivated and unhappy with their jobs. Perhaps they have once tried to work dilligently, but only end up with having the same across-the-board incentive as fellow workers who do not work as hard as them. Hence, the Aquino administration came up with the performance-based incentive system to allow a fair compensation to those who deserve to be rewarded. By altering the outcome through a performance-based bonus, government employees try to match their performance to the amount of bonus they wish to receive. Motivation Theories. (2009, April 26).

Why Do Employees Take More Initiatives to Improve Their Performance After Co-developing Performance Measures? A Field Study (Groen, Wouters & Wilderom, 2012) Usually, people work more conscientiously when their performances are being monitored, be it in school, at work, or even in playing games. Knowing how grades, scores or output are obtained help an individual’s goal setting and invoke the determination and commitment to achieve the said goal. What more if the employees themselves determine how they are to be rated? Having an opinion and first hand experience in developing performance measure criteria make employees not only feel valued, but also feel a sense of fairness because they know that the criteria they set are attainable and reasonable.

Groen, Wouters and Wilderom (2012) conducted a field study to investigate why employees perform better when they are involved in developing peformance measures. The study used the theory of planned behavior, which states that beliefs predict how individuals behave or plan to behave. Gathering data from meetings, interviews, company information data, quantitative questionnaire and first-hand experience in the field in a beverage manufacturing company, bottling line employees were found to be more motivated, have more initiative, and more positively affected by social pressure when they were involved in developing performance measures. The variables examined in the study included attitude towards the job, social pressure from coworkers, capability from personal skills. All these variables were found to positively and significantly influence an employee’s intiative towards his job, thus increasing his productivity. The study showed that productivity and initative of the employees who were aware and had a say on performance measurement criteria improved the departments’ overall performance. 7. Models of Performance-Measurement Use in Local Governments: Understanding Budgeting, Communication, and Lasting Effects (Melkers & Willoghby, 2005) Since performance measurement has been emphasized in various literatures, the importance of having them adopted and implemented is no longer debatable. Performance measurement schemes help in understanding the strengths and weaknesses of the organization, and it also serves as an objective basis of planning the budget to be used to fund government projects. The study of Melkers and Willoghby (2005) paid close attention to the usefulness of performance-based information on the operations of the local government in the US, communication, and budgetary decisions. The pervasiveness of performance measurement implementation in the US was also studied through the results obtained from a national survey of city and county administrators and budgeters of nearly 300 governments. Multiple regression analysis was implemented to find out whether dependent variables budget effects, communication effects and lasting effects index were individually affected by independent variables community characteristics, respondent characteristics, organizational culturea and performance measurement characteristics. The results showed that although the use of performance indicators was pervasive, the respondents were apathetic with regards to the effectiveness of these performance measurements for budgetary concerns and operational processes within the government unit. 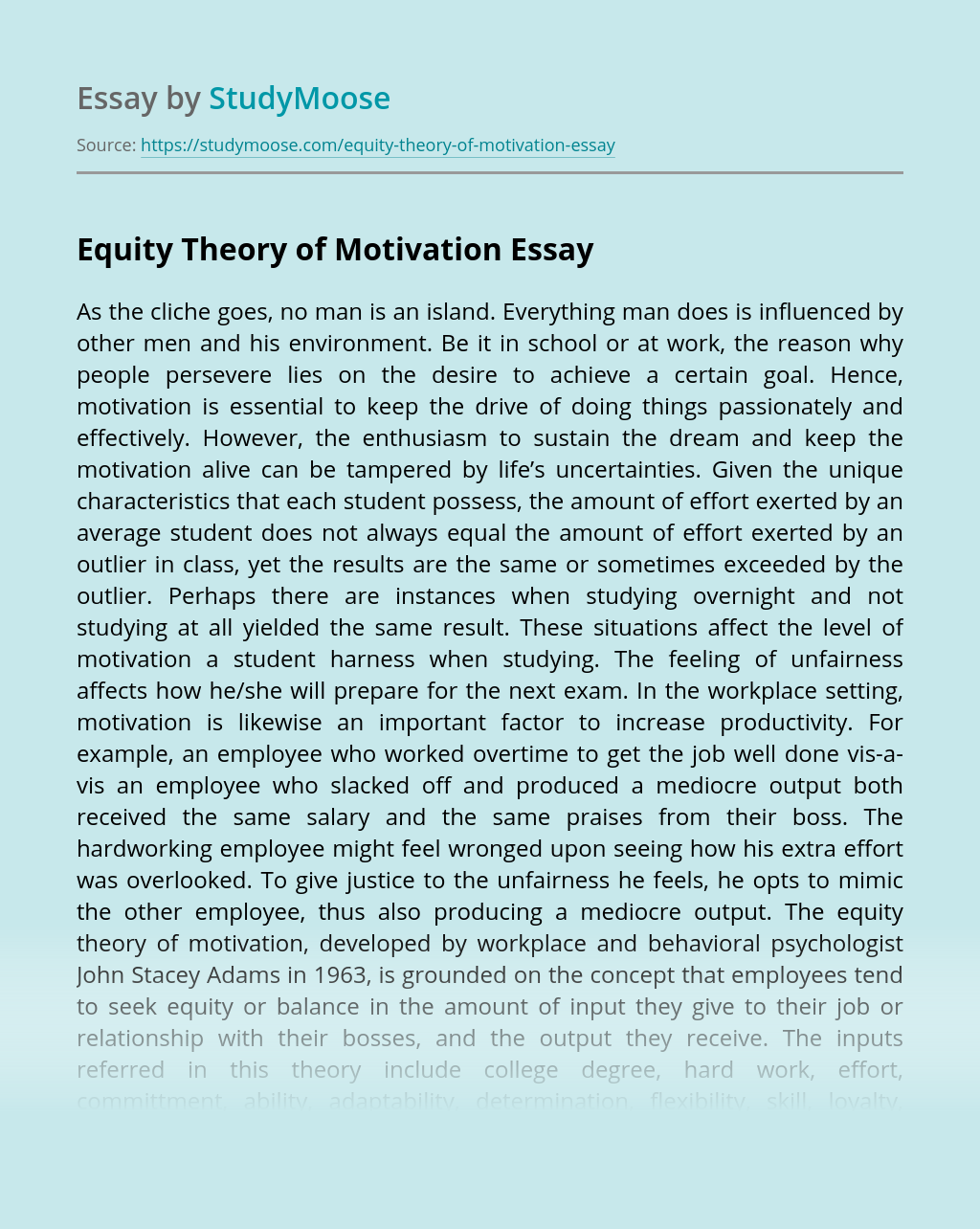 Turn in your highest-quality paper
Get a qualified writer to help you with
“ Equity Theory of Motivation ”
Get high-quality paper
Helping students since 2015
Stay Safe, Stay Original