The Merchant of Venice: Is Shylock a Villain?

Unlike Shakespeare’s other villains, Shylock is not depicted as a clear-cut villain. Which makes us wonder, is he really a villain? Throughout the story, Shylock has been portrayed in numerous ways. A father, a moneylender, and a faithful Jew. Different instances in the play force us to form an opinion on his character. This opinion keeps changing with the change of scenes and events. So the question arises- Is Shylock a villain or a victim throughout this play?

When Shylock is first introduced to us in Act 1: Scene 3, he talks about how he is ill-treated by the Christians for being a Jew.

Don't use plagiarized sources. Get your custom essay on
“ The Merchant of Venice: Is Shylock a Villain? ”
Get custom paper
NEW! smart matching with writer

“Still have I borne it with a patient shrug, For sufferance is the badge of all our tribe.” He explains. His account of incidences where he has been shamed by Christians, mainly Antonio, creates a sense of sympathy amongst the audiences. It is at this stage that we first think of Shylock as a victim.

When Shylock contracts the bond and makes the penalty a pound of Antonio’s flesh, the audience is taken aback.

The victim’s impression comes under question and a villainous side of his starts shining through his multiple virtues.

Jessica, Shylock’s daughter, talks about her father as if he is a devil and compares her household to hell in Act 2: Scene 3, where she is first introduced to the audience. This daughter’s hatred for her own father creates more suspicion about Shylock’s nature. Jessica feels ashamed to be Shylock’s daughter and does not try to hide her thoughts about him.

She believes that by eloping with Lorenzo and becoming a Christian she will be free from her father’s clutches and her sadness. If Jessica is willing to go to such lengths to get away from her father then he really must be like a villain. At least that is what we are made to believe at the time being.

In Act 2: Scene 5 Shylock reluctantly attends Bassanio’s feast and leaves his house under the care of Jessica. He tells her to lock all the doors and windows and not to open them for anyone. This can be seen as Shylock being an overprotective parent, but when he also tells her to secure all their possessions we understand that his intention is not only keeping Jessica safe but also his possessions. So, it is hard to tell what he is more concerned about. He trusts Jessica and that is what makes her betrayal even more hurtful, thus the audience develops a greater sense of sympathy towards him.

Shylock is appalled by his daughter’s elopement and the wealth she took along with her. He runs around on the streets shouting, “My daughter! O my ducats! O my daughter.” He wants his ducats and daughter back. He cries about two precious stones, a memento of his wife’s courtship, which Jessica stole. He is desperate to get them back. This shows his deep-rooted love for his dead wife. Now we know that he is not completely heartless and has the capability to love. This whole conundrum leaves him very emotionally unstable. The audience can understand his grief and pain. A victim in the true essence.

In the events of Act 3: Scene 1 Shylock learns that there are rumors of Antonio’s shipwreck. This makes him happy. When Salarino enquires whether he will actually execute the bond, Shylock delivers perhaps the greatest speech in the whole play. Shylock says that if the flesh cannot be used for anything then it will at least give him revenge. Of course, he would appear as a villain for wanting to take a pound of Antonio’s flesh even if it is of no use to him, but when he explains his want for revenge we can believe that his revenge is justified.

Shylock says that Antonio has disgraced him, stopped him from making half a million, laughed at his profits, mocked his losses, disgraced his religion, made his friends enemies and his enemies, even bigger enemies. Antonio’s only reason for this treatment is that Shylock is a Jew. Shylock reasons that a Jew is no different than a Christian. They both eat the same food, die from the same diseases, and live in the same seasons. If a Jew does something wrong to a Christian then the Christians take revenge but when the same thing takes place in reverse the Jews are expected to suffer. So if they both are the same then even the Jews should take revenge. Shylock’s justification and logic are completely sound and make us wonder if he’s actually a bad person at heart or if he has just succumbed to the evils of society.

The loss of his daughter and the loss he has suffered in searching for her along with the degradation he faces from the Venetians makes Shylock angry and he wishes for revenge. To him having his revenge would be redemption. He thinks that he is the only one who is suffering. In the very same scene, he tells Tubal, his trusted friend, that he wishes his daughter was dead at his feet so that he could have his money back. This again puts him in the light of a villain as he wishes for his own daughter to be dead just to get his money back. We can understand that he values his money more than he values his daughter at this moment. This could simply be due to the heavy emotional turmoil he is facing.

When the rumors of Antonio’s losses are confirmed Shylock rejoices. He is overjoyed that he will finally be able to get his revenge. When Tubal tells him about Jessica’s expenditure he is enraged. Tubal tells him that Jessica exchanged one of his rings, given to him by his wife, for a monkey. Suddenly his anger grows into a fire of rage.

Shylock is ready to take his revenge on Antonio. He is delighted that at least one thing is going according to his wishes. As the day of the trial for the bond nears, many people try to convince Shylock to abstain from the penalty. All the people’s words fall flat as Shylock’s decision seems to be set in stone. He makes it clear that he will have his penalty and his penalty alone. Everyone tells him that such a bond would never be executed but Shylock retaliates, saying that the execution of the bond is justice and that the Duke cannot go against the law if he wishes the best for Venice. Shylock’s villainous nature is now at an all-time high.

Finally, the day of the trial arrives. Shylock is asked why he is so determined to have the penalty. Shylock says that for certain things there are no justified reasons. Similarly, his hatred for Antonio is the only justifiable answer he can think of. Here he behaves like a complete antagonist. He also asks if there is any man who would not kill someone they hate. He makes his hatred crystal clear. He feels no mercy towards Antonio-that is until his own wealth comes into question.

Shylock does want his revenge but he does not want it at the cost of all of his hard-earned capital. The thought of losing the little he has left makes him rethink his decision and he breaks the bond. He seems to have gotten the defeat of a villain. This is the last time we see Shylock in the play, he is defeated.

From the entire play, we know that Shylock has not been portrayed completely as a villain or a victim. He certainly behaves like both in different instances. We must understand the reason behind his villainy. He wanted his revenge. Revenge for all the wrongs done to him. All the misery he had to face at the hands of Antonio. Shylock did not simply want a pound of Antonio’s flesh, he wanted revenge. He became a victim of his own revenge. It consumed him and he took on the shape of a villain. Along with his revenge, he also fell victim to the pain of his daughter’s betrayal. No father would like to be betrayed so horribly by their own daughter, a daughter they raised. This victimhood gave rise to his villainous side.

In the end, Shylock became a victim of the discrimination of society. His method of revenge was agreeably inappropriate but the revenge itself was justified. His questionable choices gave him the presumably false title of a villain. A title he has been remembered for decades.

The Merchant of Venice: Is Shylock a Villain?. (2020, Nov 10). Retrieved from http://studymoose.com/the-merchant-of-venice-is-shylock-a-villain-essay 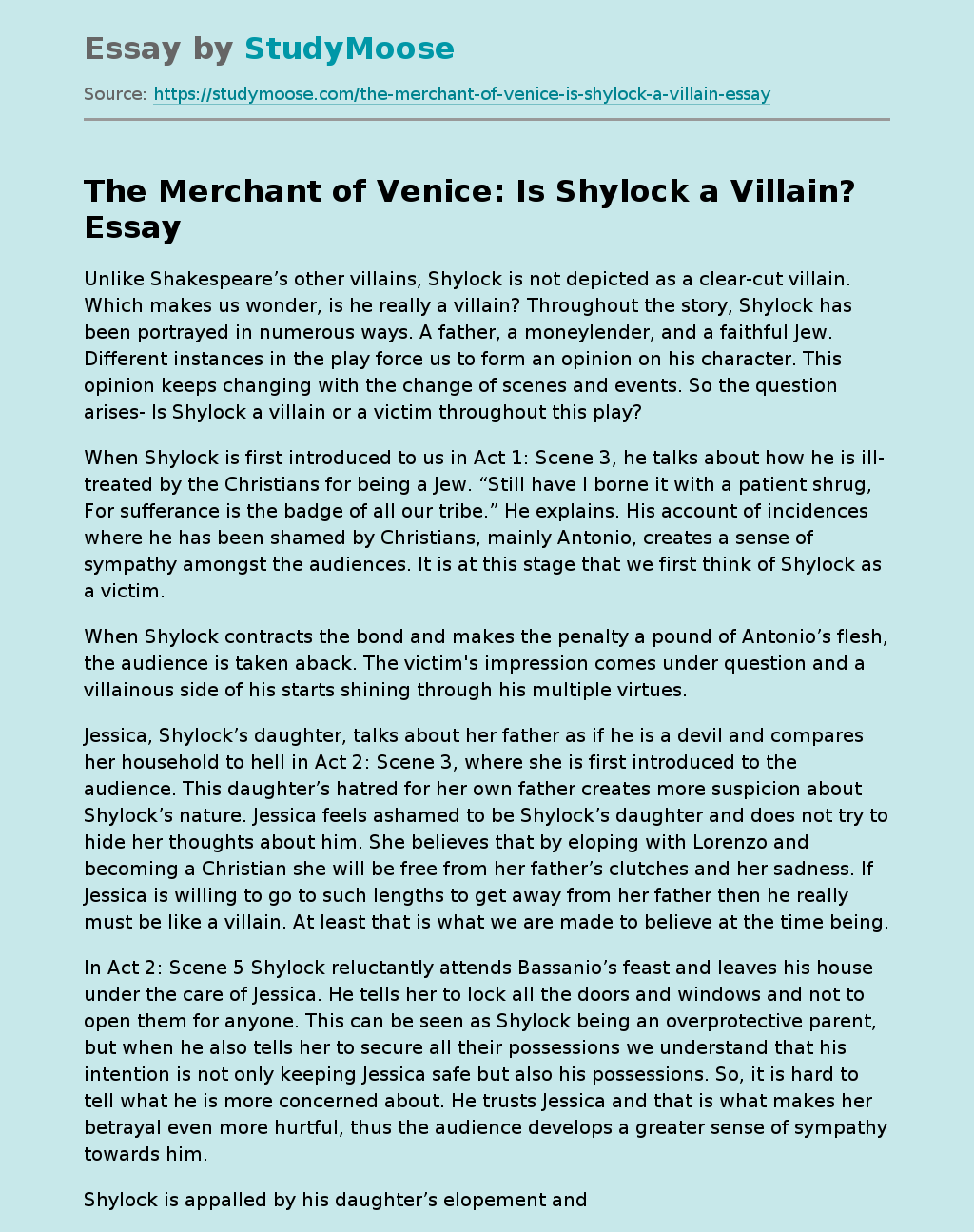