"A Merchant of Venice" Essay

In the play The Merchant of Venice, Shakespeare reveals Portia’s character in a variety of different ways. She seems to have multiple personalities, and it is very difficult for one to conclude whether she is kind or cruel. For example, she could be said to be prejudiced and sly, while also very caring.

Portia is quick to judge others on appearances and first impressions. In scene II, when Portia is discussing her suitors with Nerissa, she explains all of the traits she doesn’t like about each of them.

Don't use plagiarized sources. Get your custom essay on
“ “A Merchant of Venice” Essay ”
Get custom paper
NEW! smart matching with writer

She even suggests placing a glass of wine on one of the incorrect caskets; so that the German suitor would choose it and she wouldn’t have to marry him. In fact, she does not seem to like any of the suitors that have visited, except for Bassanio, whom she remembers with fondness: “I remember him well, and I remember him worthy / of thy praise” (1.2.114-115). In addition, when consulted about the Prince of Morocco, she makes it clear to the reader that “if he had the condition of a saint / and the complexion of a devil, I had rather he should / shrive me than wive me” (1.

This is extremely racist, especially since she hasn’t even spoken to him yet when she states this. She just immediately assumes that she would not marry him because of his dark skin, even if he had a wonderful personality. Also, Portia makes it known that she does not like people of the Jewish faith, and was extremely rude to Jessica when she first arrived in Belmont.

During this scene, Portia warmly welcomes each man, but treats Jessica as if she were invisible. When Jessica tells the group that she had heard him [Shylock] swear

To Tubal and to Chus, his countrymen,

That he would rather have Antonio’s flesh

Than twenty times the value of the sum

Portia completely ignores this piece of information, and continues talking to Bassanio as if nothing had been said. She cannot seem to accept people if they are slightly different from herself.

Portia shows signs of being sly and somewhat cold-hearted. She manages to get to Venice and trick all of the men in the courtroom into thinking she is a man. Then, she craftily turns the whole bond plot around and saves Antonio from death, finding two loopholes in the bond. One of these is that Shylock cannot shed any of Antonio’s blood and the other is that he may not take any more or less than a pound of flesh. In the same scene, she decides to test her husband’s loyalty to her by convincing him to give her the ring that had been a symbol of their love, telling him that she “will have nothing else but only this” (4.1.430). Bassanio was eventually persuaded into giving up the ring to this ‘doctor’. This was very cold-hearted of her; she should have trusted Bassanio, given that he is her husband. This trick complicated their marriage, for she now probably feels like she cannot trust him. It was a cruel trick I think, and very sly.

Portia loves Bassanio very much and cares for him and his friends. While it seems that Portia wants to accuse her husband of being disloyal, she still wants to help him in what ever way she can. At first, when she hears of the bond between Antonio and Shylock, she offers to “Pay him six thousand, and deface the bond; / double six thousand, and then treble that, / before a friend of this description / shall lose a hair through Bassanio’s fault” (3.2.298-301). When she discovers that money will not solve the problem, she risks getting caught and, accompanied by Nerissa, follows the men to Venice disguised as a male doctor. In the courtroom she stands up to Shylock and turns the bond to Antonio’s advantage, eventually causing Shylock to lose a lot of money and become terribly embarrassed. All of this she does out of love for Bassanio. Even though she has never met Antonio, she is very eager to help him out since he is a friend of her beloved husband.

However horrible Portia may seem to be in terms of prejudice and how she doesn’t trust her own husband, she still is very loving to those she actually likes. She can very well be described as two-faced: on the one hand she is sly, prejudiced and lacking in trust of her husband, yet on the other hand she is a kind and loving woman. It is this complex personality that makes her such an interesting character in Shakespeare’s The Merchant of Venice. Bassanio may want to get to know all of her sides before committing himself to a woman whom he barely knows.

"A Merchant of Venice" Essay. (2016, Jun 28). Retrieved from https://studymoose.com/a-merchant-of-venice-essay 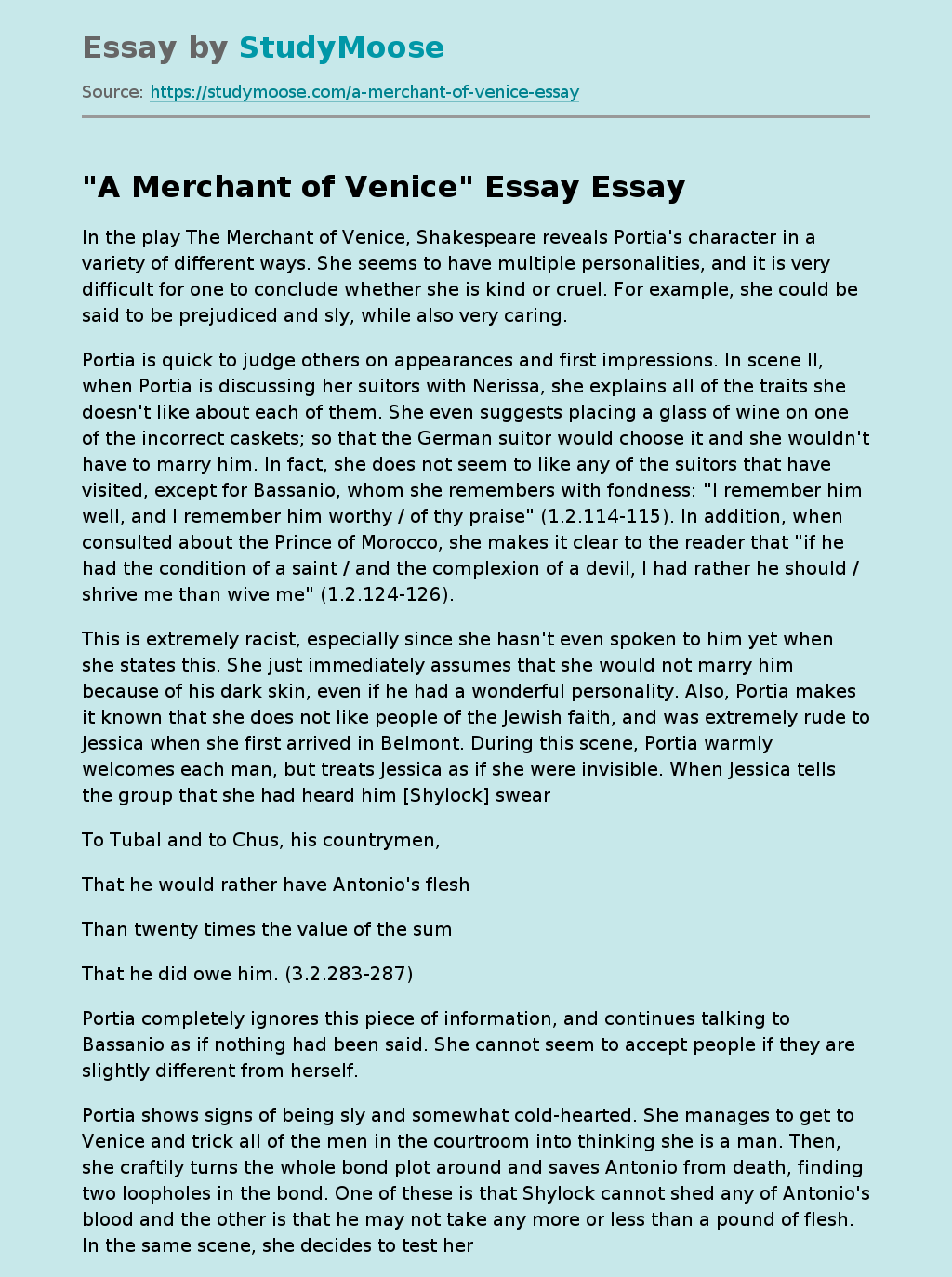