A. Is Shylock a man “more sinned against than sinning,” or does he take his revenge too far in the pursuit of his pound of flesh? B. The wrongs against Shylock climax in the courtroom scene. He has lost his ducats, daughter, and now his religion. C. Thesis: The absolute epitome of selfishness can be described from within Shylock’s character; that selfishness is what prevents any would-be sympathizers from being able to fully commit themselves to Shylock’s case.

Don't use plagiarized sources. Get your custom essay on
“ Merchant of Venice Essay Outline ”
Get custom paper
NEW! smart matching with writer

A. Topic Sentence: Being the antagonist and villain throughout the play Shylock must be the antithesis to the general characteristics of the protagonist and supporting cast. B. Shylock was a Jew, a not very admirable quality during the late 16th century in Venice. C. “Shylock, albeit I neither lend nor borrow/ by taking nor by giving of excess” (Act 1, Scene 3, Lines 61-62) D. He is a usurer, something that Antonia literally despises and spits upon.

E. This shows the hypocrisy of Antonio’s actions

F. The daughter of his, Jessica, wishes to be free of him while he cloisters her and denies her liberties in order to keep her for himself.

G. Shylocks character is what fuels him, but the treatment he has had to endure has affected the way the reacts to people.

* A. Transition/Topic Sentence: The power Shylock has to be a constant obstacle is abused often and with no guilt, he is fueled from only the intense urge of revenge.

* B. The bond, from which Antonio is tied to, has no loophole from the pound of flesh, even when Bassanio wishes to not be tied to it. * C. “You’ll ask me, why I rather choose to have/ A weight of carrion flesh than to receive/ Three thousand ducats. I’ll not answer that,/ but say it is my humour…” (Act IV, Scene I, lines 40-43) D.Shylock will not allow a counteroffer to his pound of flesh, even though it was offered threefold. * E. Shylock is a direct obstacle to Lancelet’s happiness and has kept him for too long. * G. Having to go live in the ghetto has given Shylock a home where he can nurture his despisement of Christians.

* A. Transition/Opening  * Sentence: Anti-Semitism debates are a central theme, and the hypocrisies that stem from it are defined in Shylocks views of Christians. * B. He is portrayed as more consumed by the fear his ducats are gone than his own daughter. * C. “My daughter, O my ducats, O my daughter!/ Fled with a Christian! O my Christian ducats!” (Act II, Scene 8, lines 15-16) * D. “If you wrong us,/ shall we not revenge?/ If we are like you in the rest,/ we will resemble you in that…” (Act III, Scene I, Lines 54-62) * E. When he is taunted by Solania and Salerio he points out the differences between Jews and Christians and claims that the evil he has been taught he will execute even better. * F. He does not believe that they can co exist and refuses to dine with them or pray with them, only conduct business. * G. “I will buy with you, sell with you, talk with you…” (Act I, Scene III, lines 32-34)

* A. Transition/Opening Sentence: The entire court scene is the showcase of how all the wrongs committed upon Shylocks Jewish soul will now come back to haunt his wrongdoer. * B. tries to bargain himself out of his punishment even when he has lost * C. “Shall I not barely have my principal?” (Act IV, Scene1, lines 356)

*
* A. In determining whether or not it is right to sympathize with the plight of Shylock, it is necessary to forgive him for his revenge. But why is he forgiven when he could not forgive Antonio; for if he had then the character of Shylock would not be in question. * B. Reconfirmed Thesis: In his refusal of mercy and forgiveness, Shylock sets himself up for failure, and fails without grace leaving as a broken man without money, religion, or his precious ducats. * C. The debate of the humanness of Shylock has withstood the hardy hands of time because of his relatableness as a villain. It is harder to hate the villain when you have reasons to hate the hero. 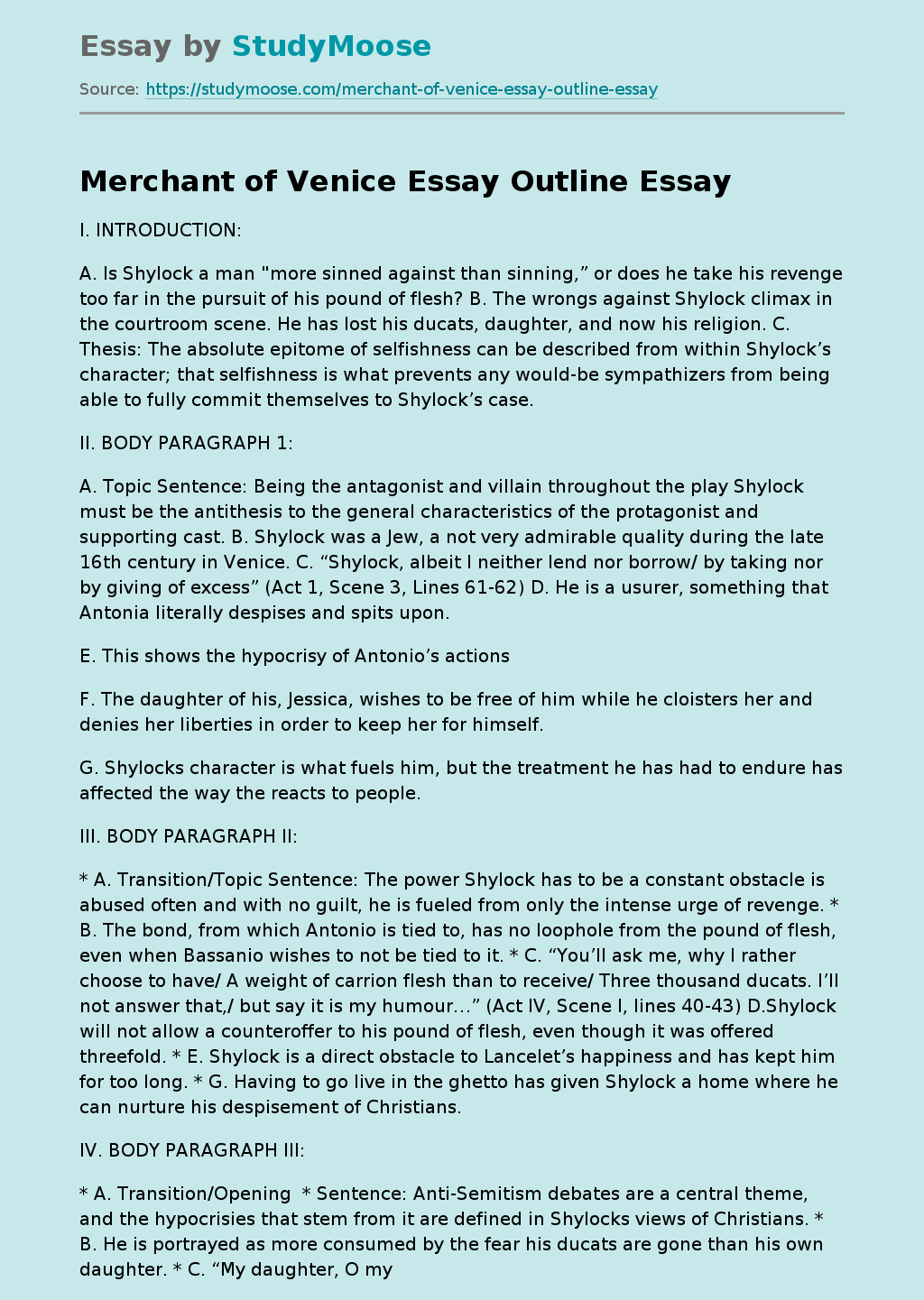