Relation Between "Jew of Malta" and "The Merchant of Venice"

The two novels, Christopher Marlowe’s ‘The Jew of Malta’ and William Shakespeare’s ‘The Merchant of Venice’, the main characters are Jews, a characteristic that makes the comparison of the books easier. However, the way the characters are presented has made the two stories have deep and active anti-Semitic notions and messages. Right from the beginning of the play, we can see some clear negative stereotypes towards Jews. Barabbas is undoubtedly portrayed as a man who loves money to an extent that he seems addicted to them.

Don't use plagiarized sources. Get your custom essay on
“ Relation Between “Jew of Malta” and “The Merchant of Venice” ”
Get custom paper
NEW! smart matching with writer

In the opening, we see a merchant, counting his money with passion, and later on complaining about not having made enough by his recent business activities. Marlowe straightly defines his whole character and attitude by this portrayal, showing us that Barabbas is nothing more than a greedy Jew. As the story progresses and the plot unfolds, the character of Barabbas also unfolds, showing us how he doesn’t even hesitate doing unethical and heartless things just so that he can protect himself from losing money.

When his wealth is taken away, after he refuses to give half of it like the other Jews did, he unleashes his ruthless effort to regain his wealth.

He doesn’t hesitate using his daughter to retrieve the gold and jewels he has hidden in his house, and it is meaningful to see how he reacts after Abigail throws him the bags of gold out of the window and he embraces them while ignoring his own daughter. Although this is not the only example of how he puts money over more important things, the fact that he seems to place money above Abigail, his own daughter, shows his general attitude.

But of course it doesn’t stop there, as apart from his avaricious self, he has to quench his thirst for revenge and execute his plan for retaliation.

His plan consists mainly of taking revenge from the man who took away the most precious thing he has, his wealth. That man of course is Ferneze, the governor of Malta. So, Barabbas decides to kill Ferneze’s son, Lodowick, that way taking the revenge he so passionately seeks. Once again he uses his own daughter as decoy, to execute his plan, showing that she has mainly a functional purpose for him. After he completes his plan and kills not only Lodowick but also Mathias, the man that his daughter loves, he feels betrayed by his daughter, as she converts to Christianity.

I believe that this is where the insanity and sickness of Barabbas reaches a peak. He is determined to kill his own daughter, because he feels that she disrespects her family’s name. The epilogue to this madness comes when finally Barabbas gets killed by his own evil plots. In the end of the story we can easily identify the negative characteristics that Barabbas has, which are also strongly connected to the fact that he is Jewish. His elitist nature, his illogical actions that are all driven by his avarice, and his lack of sentiments towards other people, make him fit ideally the stereotypes of Jews that existed at the time. So, every single part of his hateful and insane being, is justified by the fact that he is Jewish, and thus it is natural that he is unstable and inferior to Christians. The next example of anti-Semitic portrayals comes from ‘The Merchant of Venice’. The main character, Shylock is portrayed as a greedy Jewish moneylender that is just like Barabbas, when it comes to hate towards Christians and other people in general. He is also a heartless man, not feeling pity for anyone, showing a rather sadistic nature.

The hate he feels for Antonio is so immense that makes us question to what extent he is actually rational at all. Throughout the development of the plot he seems to hold so many negative values that it is impossible not to make a connection between his character and the fact that he is a Jew. Just like Marlowe, Shakespeare makes the fact that he is Jewish the root of all evil, as from that very fact all the other negative traits arise. As Bloom mentions in his essay, Shylock is a walking nightmare, and that should be the only way that anyone portrays him. As we can see from his speeches, he clearly has a great love for his wealth and he is not jeopardizing his financial position for any reason. It is not a coincidence that when Jessica runs away with his money, he mostly worries about his wealth and not so much about his daughter. Also, the fact that Jessica had to run away shows that Shylock is far from an ideal father. His speeches also show that he has an extremely negative attitude towards Christians that he justifies as the retaliation for all the anti-Semitism he has faced. He seems very resentful towards the people that have acted in a bad way towards him and as I mentioned earlier, especially Antonio. So, his actions are mainly driven by his rage and what he thinks as retribution.

By the portrayal of Barabbas and Shylock, a logical question approaches. Are the two writers inspired and influenced by racism and the anti-Semitic ideas of their time? In ‘The Jew of Malta’ it is hard not to recognize all the negative Jewish stereotypes presented in the form of a very unappealing character, Barabbas. Barabbas is not just an unethical and evil man, he is the typical money-loving Jew, with all the disgusting characteristics that the racist society of the two writers has attributed to Jews.

Such a racist society had created all these negative stereotyping for Jews, making them seem like greedy monsters. So I find it impossible that Marlowe as an author hasn’t been affected and influenced by the stereotypes of his time. That is mainly because in societies that racism towards a specific religion is so acceptable, there is very high tolerance for reproduction of such ideas and thus such a portrayal would not arise any questions or hate. Such situation reminds me of what happens with many fictional evil characters like the devil.

I doubt that even a single reader would object if a writer attributed evil characteristics to the devil! Although it may seem like an oversimplified example, I believe it captures the very essence of the attitude of people at the time. That is, because the society had condemned Jews of being the cause of everything bad. Such portrayals are very similar to what Carl Marx has written hundreds of years later, describing Jews as mere worshipers of money.

Although in our days the Jew of Malta can be viewed as a cynical work, I seriously doubt that Marlowe has such an intention, as he characterized it atragedy.  It is clear to me that no matter how anti-Semitism is viewed today after many important events like the Holocaust, the play was influenced by a lot of religious racism and prejudice, and Barabbas’ characteristics were nothing but the actual portrayal of ‘evil Jews’ as the English at the time viewed them. Consequently, Barabbas seems like the epitome of a real ‘Jew’, the epitome of evil, greed and lack of conscience. The case is similar in ‘The Merchant of Venice’, as Shylock is also portrayed like a perfect example of a Jew, as stereotyped in the Elizabethan times.

I personally feel that Shakespeare was also influenced by the general anti-Semitic environment he lived in. Although a verdict of whether he was actually racist in his story is hard to be reached, I find it impossible that a play meant for Christians would not follow the trends of the time. The examples in the story are numerous and clear, straightforwardly proving the position of the Jews. From the fact that the Jews are presented the way they are, up to the point that they are forced to convert to Christianity or give up a part of their wealth, it is evident how negative the Jewish religion was as a characteristic.

The fact that it was the same thing for the government to gain wealth and convert a Jew, show the deep-rooted hatred against this religious group, and the fact that Christians simply wanted to get rid of them as they viewed them like parasites. Such sort of treatment reminds us, newer generations, of the Nazis and their monstrous acts but at the time of the original play, as aforementioned, racism was perfectly fine! Nevertheless, Shakespeare does act in a racist way, if we assume that a writer is judged by what he actually writes.

I would strongly doubt that Shakespeare intended to make his play anything similar to a parody or a criticism of stereotypes, and I believe that he expresses what he purely thinks. As we have seen from the two plays, the Jewish protagonists, Barabbas and Shylock have a very negative and unethical personality. Their vile and evil acts, paired with their appalling characters, seem to be the actual description of a negative stereotype towards the Jews.

Although it may seem ambiguous whether these portrayals are actual and literal or simply ironic, it is clear to me that the answer is simple. The two authors have no intention at all of criticizing racism and simply portray Jews just as a normal Elizabethan would. So, the two stories, although politically incorrect and really prejudiced, are the result of truthful portrayals and honest approaches of the description of characters with a Jewish religion. No matter how wrong and inaccurate, these descriptions were made with complete seriousness by writers living in an environment were such sort of prejudice was rooted from many years ago and continued to bloom.

Relation Between "Jew of Malta" and "The Merchant of Venice". (2017, Jan 10). Retrieved from https://studymoose.com/relation-between-jew-of-malta-and-merchant-of-venice-essay 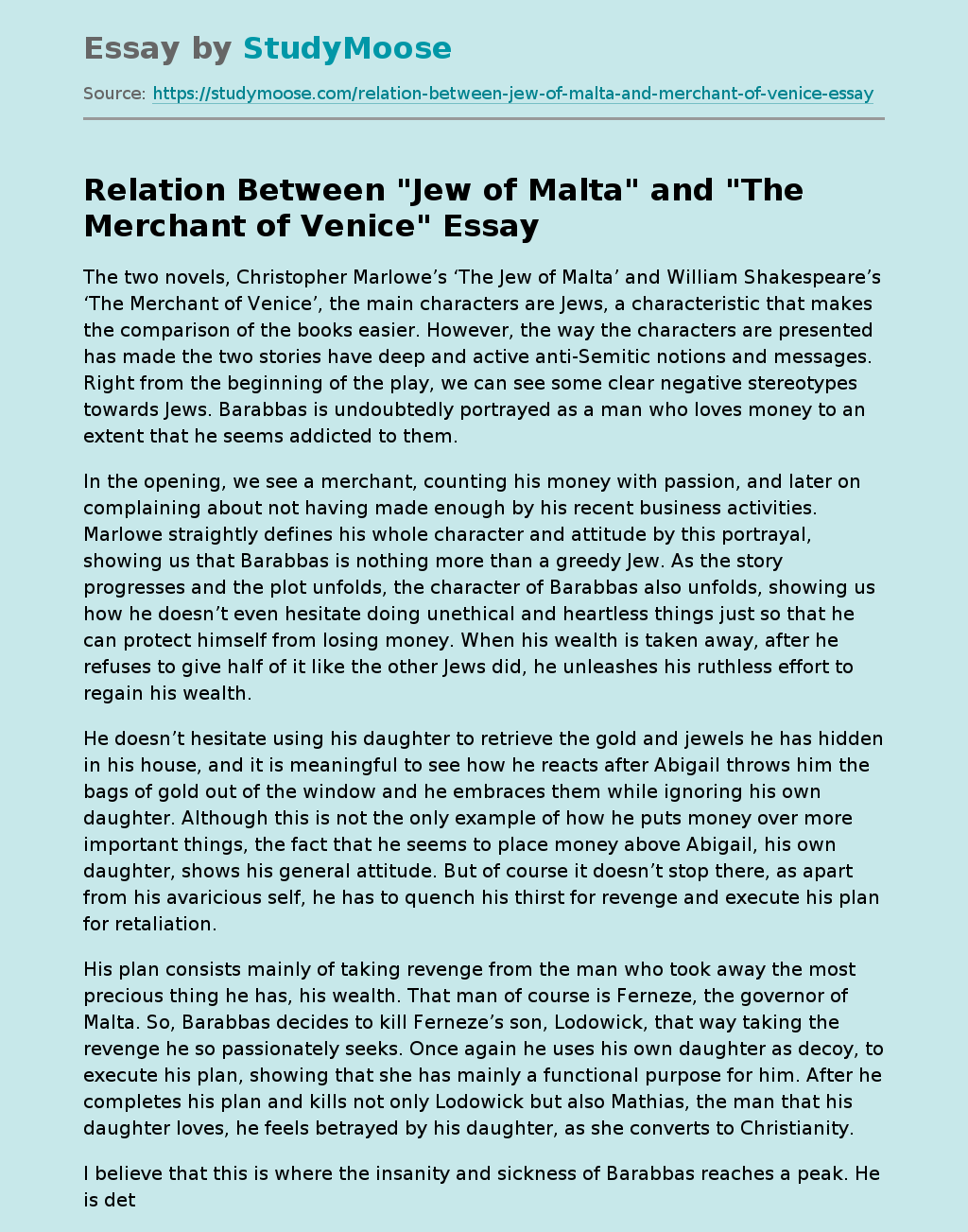