Misogyny, by definition, is the hatred of women and girls. In Hamlet by William Shakespeare, misogyny affects women in negative ways that both impact how a woman is portrayed along with how these stereotypes and controls influence her actions and ultimately lead to her demise. Gertrude and Ophelia, the only major female characters of this play, are both women who must confront various factors and adverse effects of misogyny. Shakespeare uses the patriarchal system to suggest the effects of men’s misogynistic behavior towards women.

Don't use plagiarized sources.
Get Your Custom Essay on Hamlet Essay – Misogyny Just from $13,9/Page

The patriarchal system allows men to objectify women by using them as pawns, and gives men the power to control and manipulate women as they please. Shakespeare demonstrates this through the words and actions of Polonius, Ophelia’s father. Firstly, the patriarchal system gives Polonius the power to treat Ophelia like an object and control her actions. Claudius, Gertrude, and Polonius all come together in this scene to make a plan on how to discover why Hamlet has gone so mad.

In their conversation, Polonius says, “At such a time I’ll loose my daughter to him.” (II.ii.174) Here, the word “loose” emphasizes the cynical unconcern that he has for his daughter.

The use of “loose” in this context is also a pun. Loose means cow, so Shakespeare uses this line as a metaphor to say that Polonius is soon going to “loose” his daughter, a cow, to a bull, who is none other than Hamlet. Polonius does this again while talking to Ophelia about how she shouldn’t believe Hamlet’s words or rely on any of his promises because according to Polonius, Hamlet doesn’t truly love Ophelia; he simply has a strong lust for her at the moment. “ Ay, springes to catch woodcocks. I do know, / When the blood burns, how prodigal the soul/ Lends the tongue vows,” Polonius explains. (I.ii.120) Shakespeare uses diction here to emphasize what Polonius thinks of his daughter. “Springes” are snares to catch fools and a “woodcock” is a bird that is easily taken. In simple terms, Polonius is comparing Ophelia to this foolish type of bird, saying that she is easy to get and fool. Once again, he compares her to an animal – objectifying her and bringing her down from her status as a human and woman in society. Shakespeare demonstrates how sexuality is portrayed as something crude and wrong through the actions of Queen Gertrude. Hamlet’s aversion towards his mother’s sexuality upkeeps the idea that sexuality is obscene.

Hamlet is absolutely disgusted by his mother and while talking to himself, exclaims: “O, most wicked speed, to post/ With such dexterity to incestuous sheets!” (I.ii.158-159) Gertrude’s sexuality makes her inappropriate because she remarried with “wicked speed.” The word “wicked” has a negative connotation to it. It implies that Gertrude’s speed in remarrying was bad and evil because she betrayed King Hamlet so quickly and the quickness of her actions makes her seem sexually vulgar. Hamlet is disgusted by the fact that his mother was both quick and agile with becoming incestuous. Furthermore, the idea that sexuality is vulgar is further demonstrated when the ghost of King Hamlet reveals his disgust towards Gertrude’s incest. “So lust, through to a radiant angel linked, / will state itself in a celestial bed/ And prey on garbage.” (I.v.59-60) Even though sexuality can be pure like a “radiant angel,” it will glut (“sate”) and “prey on garbage.” Shakespeare uses imagery with these words to reveal that Gertrude is garbage and that she is searched for like junk by a scavenger. The word “sate” shows Gertrude as a gluttonous animal, implying that her sexuality makes her an animal; thus sexuality is vulgar.

Shakespeare emphasizes that virginity is essential to a women’s value in society, for it makes her both pure and desirable. Ophelia’s conversations with her brother Laertes and her father Polonius provide evidence that both Laertes and Polonius place a very high value of Ophelia’s sexuality and her obligation to protect her virginity. Laertes and Ophelia have one last conversation before he departs to France. He gives her advice about rejecting lust and desire in order to keep her virginity and thereby make herself honorable. In their conversation with each other, Laertes warns Ophelia to not let herself be seduced and lose her honor by losing her virginity. He says, “The canker galls the infants of the spring/ Too oft before their buttons be disclosed.” (I.ii.42-43) Shakespeare uses some interesting metaphors in this scene to stress the value of Ophelia’s maidenhood by comparing it to a flower. The phrase “infants of the spring” implies both innocence and fertility. This metaphor compares women, in this case Ophelia; to new spring flowers whose buds still haven’t been opened (still virgins).

Laertes is saying that Ophelia is still young so she must resist her desires in order to save her virginity; doing so would also save her honor, which is something that is very valued especially for women in society. Polonius also warns Ophelia about the value of her virginity, but for other reasons. Unlike Laertes, who is more concerned about Ophelia’s happiness and emotional well-being, Polonius is more focused on himself and the respect of his family. He says to her: “You do not understand yourself so clearly/ As it behooves my daughter and your honor.” (I.ii.102-103) Here, Polonius is saying that Ophelia does not yet understand how to behave in a way that is suitable for someone who is his daughter and who is under his name and household. He is afraid that if Ophelia loses her virginity, she will disgrace the family and hurt his reputation; all in all, he fears that the respect of his family will be damaged. This makes it evident that Shakespeare believed that along with altering a woman’s reputation and social standing, women’s chastity also affected men’s social standing in society. Seeing that virginity is given such high value, Shakespeare also clearly demonstrates the consequences that a woman experiences by losing her virginity before marriage. He uses Ophelia’s character to illustrate how losing a woman’s virginity causes her to lose relationships with people she loves, her social status and reputation, her sanity, and ultimately, her life.

After losing her father, Ophelia has become insane and is singing this song while reminiscing about the love that she and Hamlet once had. She has been driven to this madness because of her instability after her father is killed and Hamlet leaves her. Slowly everyone she loves is drifting away and she feels that is because she didn’t listen to her father and brother about protecting her virginity before, so now she is suffering the consequences. In this scene, she is specifically singing about how Hamlet did not keep his promise of marrying her after they had slept together. “Young men will do’t if they come to’t,/ By cock, they are to blame,” she explains. In other words, she is saying that men will have sex whenever they have the opportunity. With the phrase “by cock, they are to blame,” she is saying that the “cock” represents the vulgar corruption of God because they are the ones who take a woman’s virginity. Furthermore, Hamlet does not want to marry Ophelia anymore because she isn’t a virgin and all men want to marry a woman who is pure and untouched. Ophelia’s madness in this scene expresses how losing her virginity led her to insanity because she was incapable of dealing with losing all of her loved ones.

Additionally, she loses any respect that she had, along with her social status, because she has done something that is completely unacceptable for a young woman to do in such a society in that time. All of this ultimately causes Ophelia to take her own life as a way to end the chain reactions of heartbreak and misery that she has had to experience, all because she decided to go and lose her virginity to Hamlet. In conclusion, Shakespeare uses the patriarchal system to suggest men’s ability to manipulate women, and ultimately gives an explanation of the reactions to men’s misogynistic behavior towards women. Common stereotypes of women gravely impact women’s perception of themselves and shape women to fit under certain archetypes in a patriarch-run society. Misogyny destructively affects the fate of “Woman” and, slowly but surely, leads to the deterioration of her idea of self and identity. 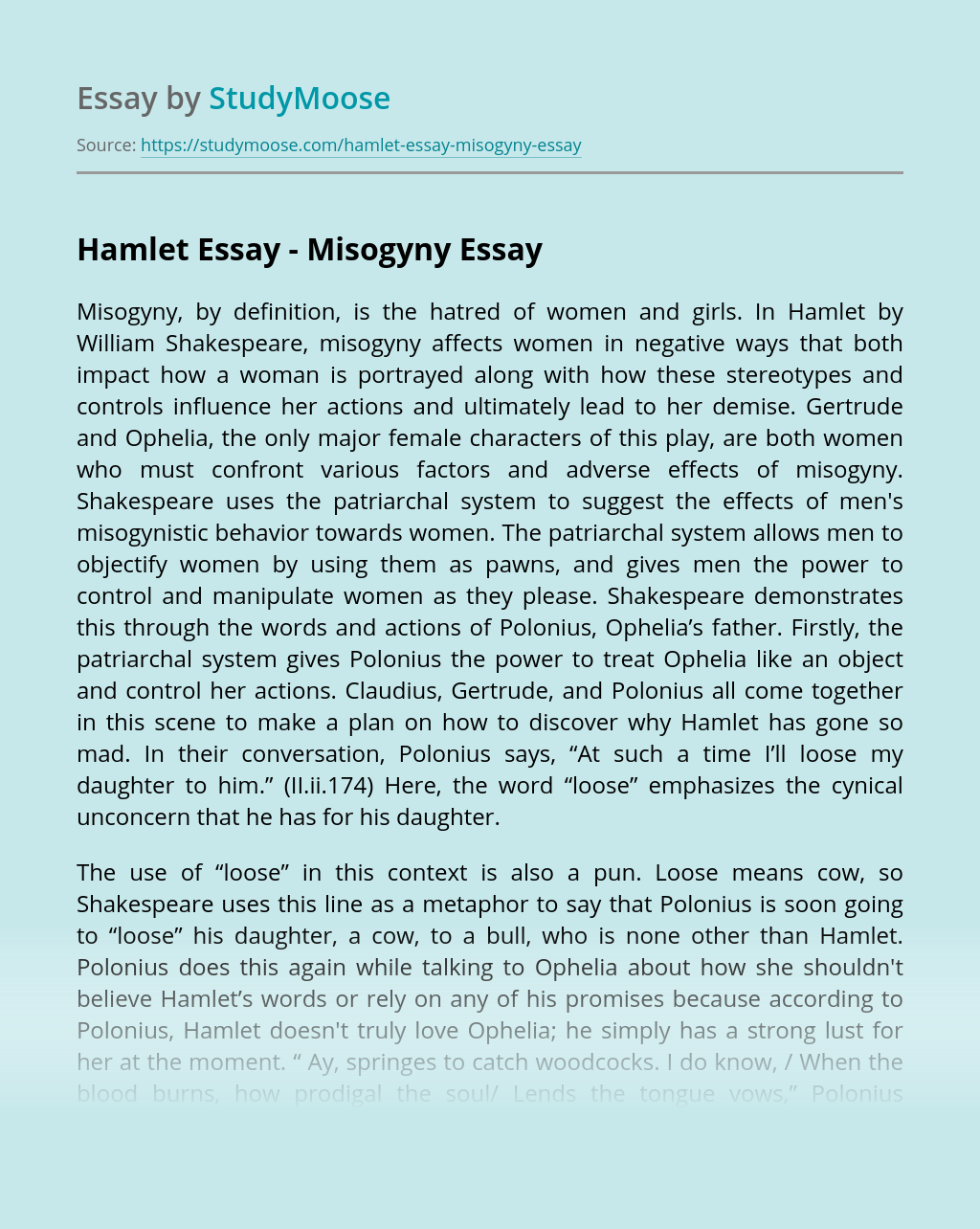 Is there anything more to say about Claudius’s role and characterization in the play? Hamlet was written by William Shakespeare in the Elizabethan era. It is widely believed to be one of his greatest plays, although not everybody agrees, T. S. Eliot calls it an ‘artistic failure’ and contrasts the play to that of Mona... VIEW ESSAY

The aspect of Shakespeare’s Hamlet that is most interesting to me is the playwright’s intimate depiction of Hamlet’s daily struggle againt the world. Through soliloquies and characterisation, we see that Hamlet’s world is a cold, political one, unreceptive to his grief, and this fundamental incompatibility is ultimately what creates and drives the play’s great drama... VIEW ESSAY

Give me your pardon, sir. I’ve done you wrong. But pardon ’t, as you are a gentleman. …… That I have shot mine arrow o’er the house And hurt my brother. Since Hamlet somehow knows this fencing fight is not only a simple competition between him and Laertes, Hamlet understands that why Laertes needs to... VIEW ESSAY

In Shakespeare’s Hamlet, the main character continually delays acting out his duty of avenging his father’s murder. This essay will discuss how Hamlet’s nature and morals (which are intensified by difficult events) prevent him from carrying out the task. In the opening scenes of the play, the Ghost of Hamlet’s late father reveals to him... VIEW ESSAY

Hamlet peacefully passed away on March 18, 1585. He was born, and raised, in Denmark. He was born on March 19, 1555. Hamlet is survived by his one and only true friend Horatio. Hamlet was loved by his mother, Gertrude, a lot. Sadly She passed away minutes before he had. Hamlet had many hobbies, which... VIEW ESSAY