Following the death of Prince Hamlet’s father, the former King of Denmark, not only do those related by blood to the great Dane experience the five stages of grief as laid out by Kubler-Ross, but the whole kingdom does as well. It is clear through many examples from the text that the kingdom as a unit experiences the grief of losing their king and others throughout the play both as one dysfunctional family and individually. The individuals in this dysfunctional family include: Hamlet, Gertrude, Claudius, Polonius, Laertes, and Ophelia.

Don't use plagiarized sources. Get your custom essay on
“ 5 Stages of Grief Hamlet ”
Get custom paper
NEW! smart matching with writer

Denial is the first stage of Kubler-Ross’ grief map. Denial is a reaction in which a person, attempting to avoid the truth of the situation, develops a false reality or simply ignores the reality at hand. This is likely the most common stage, as denial affects those dealing with all magnitudes of trauma, large and small. (Santrock, 56)

Though Hamlet does not go through the stage of denial, it is evident starting in act one, scene two, that the royal family is very much in denial of how much they should be affected by the loss of their king.

This is seen through the royal ‘we’ that Queen Gertrude uses to display her and her new husband’s feelings to Hamlet while covering up their sadness with royal duties. “QUEEN GERTRUDE Why seems it so particular with thee?

HAMLET
Seems, madam! nay it is; I know not ‘seems.’
‘Tis not alone my inky cloak, good mother,
Nor customary suits of solemn black,
Nor windy suspiration of forced breath,
No, nor the fruitful river in the eye,
Nor the dejected ‘havior of the visage,
Together with all forms, moods, shapes of grief,
That can denote me truly: these indeed seem,
For they are actions that a man might play:
But I have that within which passeth show;
These but the trappings and the suits of woe.”
(Shakespeare, 1.2.2)
The Royal family, in this scene, had only just recently lost their king before Claudius and Gertrude married and started their work as regents once again. The biggest implication of their being in the stage of denial is their preoccupation with Fortinbras’ perceived anger rather than Hamlet’s actual sadness. They are too in denial about their son’s and perhaps their own guilt and trauma that they do not help or address the grief at all. Gertrude is a perfect example of denial because of her lying to herself and telling herself that everything is perfect and back to normal when it is clearly not.

Ophelia also goes through denial on a smaller scale in the first act, as her trauma is losing her love, Hamlet, because of her father’s orders. This denial only grows when she loses her father and he is not given the proper burial rites or respect. She then feels what Hamlet thinks he felt, yet says and does nothing until her suicide because she was very likely in denial about her ability to help at all.

Anger is the second phase of Kubler-Ross’ five stages which is characterized by loss of judgment and simple rage at either the event which they are grieving, others, and/or themselves. Anger is often associated with madness as it impedes the objective observation skills and, like insanity, can cloud the mind with anything but the truth. (Santrock, 57)

The angriest character in all of Hamlet the title character himself, Hamlet. Hamlet’s anger is especially clear in his rash dealings with his family, which, he is supposed to be bonding with over this shared grief, his visions of his father as a ghost, and his violent outbursts against the denizens of his kingdom.

When he enters his mother’s chambers in act three, scene four, he shows many signs of madness and anger, including visions of violence inciting figures, lashing out against his mother, and the murder of Polonius behind the veil. “HAMLET

How is it with you, lady?
QUEEN GERTRUDE
Alas, how is’t with you,
That you do bend your eye on vacancy
And with the incorporal air do hold discourse?
Forth at your eyes your spirits wildly peep;
And, as the sleeping soldiers in the alarm,
Your bedded hair, like life in excrements,
Starts up, and stands on end. O gentle son,
Upon the heat and flame of thy distemper
Sprinkle cool patience. Whereon do you look?”
(Shakespeare, 3.4.18)
Bargaining and Depression are slightly similar stages of grieving that as seen in Hamlet, can happen at the same time. Bargaining is characterized by an attempt at negotiating with fate, while depression understands the imminence of death. This being said, there is no reason why Hamlet could not have been experiencing both of these stages at once. In fact, Hamlet seems to have drifted in and out of these stages in between going through anger and acceptance. (Santrock 58, 59)

In act one, scene two, Hamlet demonstrates bargaining and depression by almost asking the all-powerful to take his life away completely, because he is too saddened and maddened by all of this outrageous behavior that he would rather die. “HAMLET

O, that this too too solid flesh would melt
Thaw and resolve itself into a dew!
Or that the Everlasting had not fix’d
His canon ‘gainst self-slaughter! O God! God!
How weary, stale, flat and unprofitable,
Seem to me all the uses of this world!
Fie on’t! ah fie! ’tis an unweeded garden,
That grows to seed; things rank and gross in nature
Possess it merely.”
(Shakespeare, 1.2.6)
Again in act three, scene one, Hamlet makes another speech that implies his fickle, suicidal-bargaining tendencies. In this speech he talks about his self-loathing due to his cowardice and he wishes that it could all be over, like a sleep, a quiet end. “HAMLET

To be, or not to be: that is the question:
Whether ’tis nobler in the mind to suffer
The slings and arrows of outrageous fortune,
Or to take arms against a sea of troubles,
And by opposing end them?”
(Shakespeare, 3.1.1)
Hamlet is not the only character to go through bargaining and depression, though. Ophelia also, in her singing and solemn visits to her father’s “burial site”, clearly shows signs of depression. She acts on these depressed thoughts by taking the bargain of suicide; if she cannot be happy in this world, she should take herself out of it to avoid the pain, and she does.

Acceptance is the bittersweet end to grieving in which individuals come to terms with the fate they are handed, whether it be death, loss, or a reminder of their mortality. (Santrock, 60) The final scene before Fortinbras arrives to Elsinore, it is almost as if each character is asking for forgiveness through their passing through the stage of acceptance. Every action, the voluntary drinking of the cup that Claudius does, Laertes’ last
words to Hamlet, Gertrude’s voluntary drinking of the cup so Hamlet would live a bit longer, they all seemed to be actions of final absolution.

Kubler-Ross’ five stages of grief are plentiful in Shakespeare’s dramas, especially Hamlet, simply because of the massive amounts of tragedies that occur within Hamlet that warrant grieving. The grieving process in Hamlet is easily visible because of the steps laid out by Kubler-Ross and how they match almost exactly with the feelings and actions of not only Hamlet, but the whole kingdom, including: Gertrude, Claudius, Laertes, Polonius, and Ophelia. 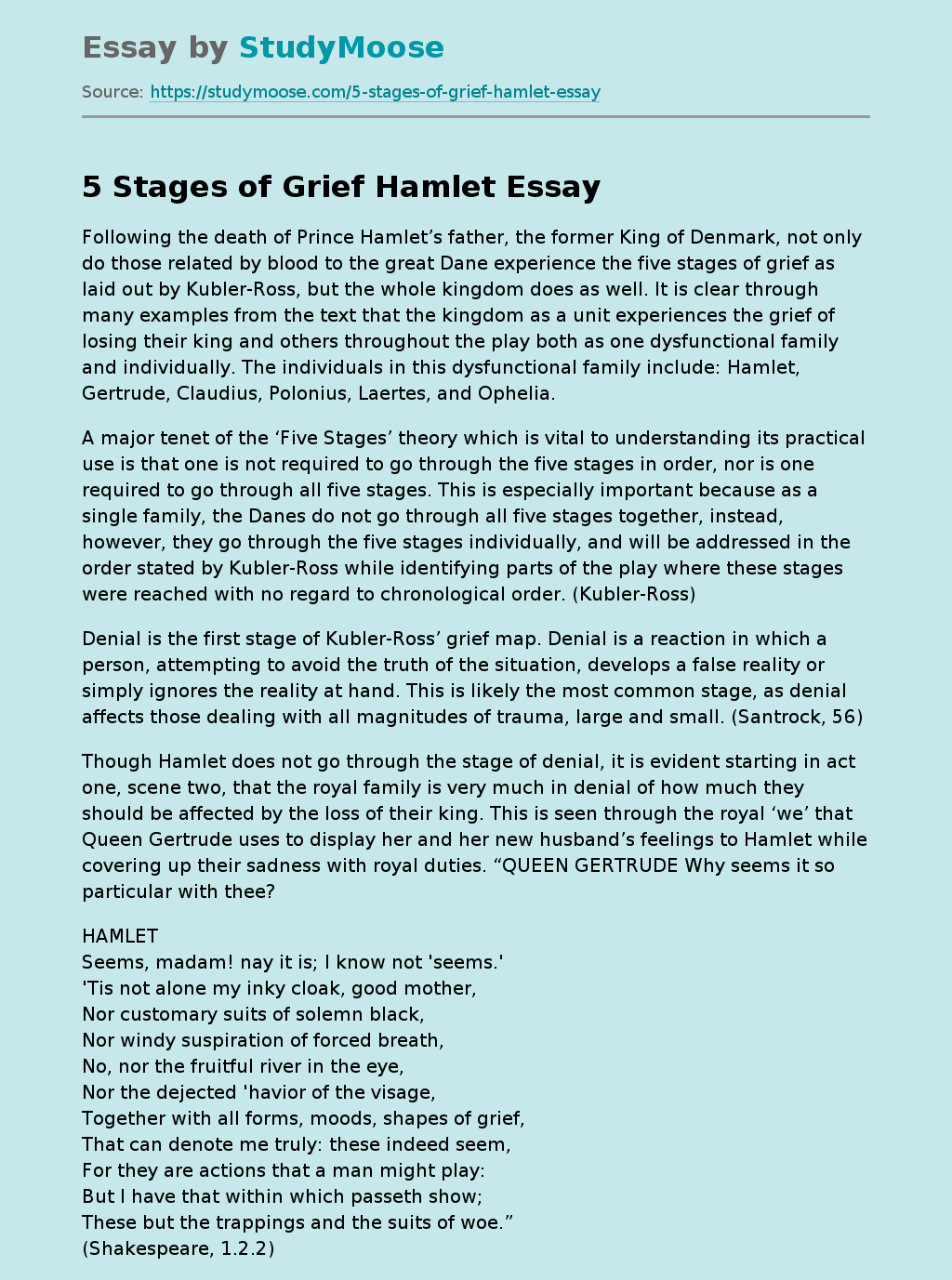