Contrast of Responses to Grief Between Olivia and Viola

Twelfth night is one of the transvestite comedies of Shakespeare where cross dressing and disguise form the crux or the pivot on which the play revolves till its conclusion. Viola, like all Shakespeare’s heroines is highly likable and perhaps the only one who has a great degree of clarity of emotion. In contrast to her both Olivia and Orsino are depicted as self indulgent and given to hyperbolic melodrama.

Early in Act I readers are given to understand that Olivia has lost her brother (and even her father within a very small period) and chooses to grieve for him by being away form the world for the next seven years.

Don't use plagiarized sources. Get your custom essay on
“ Contrast of Responses to Grief Between Olivia and Viola ”
Get custom paper
NEW! smart matching with writer

This decision of Olivia seems to be highly random and haphazard. This is also a glimpse into her character where she only cares about her feelings and lets everybody else around her suffer by her apparently extended mourning.

This arbitrary self indulgence is reflected in the other major character of the play Orsino, who chooses to pine away for his lady love Olivia who has rejected his advances several times and as is reported in Act I, even refuses to take is messages.

Olivia creates an image of highly loving and attached sister who grieves the loss of a sibling to such an extent that it shall be spoken off by her society and be remembered by the posterity. This premise itself gives a lot of scope to question the honor of her intentions.

In marked contrast, Viola, when she learns that she is the only survivor of the ship wreckage, and that her brother might be one of the victims, tries and looks ahead in an attempt to rebuild her life.

She is a pragmatic person, who would rather believe that her brother is dead rather than place hopes on faint claims by seamen that they had seen him tying himself to an afloat broken mast. She immediately sets herself on finding gainful employment and setting her life on course. The only strange decision she takes is to dress up as a man as she wants to get into the employ of Orsino.

But since this decision leads to all the necessary confusion and conflicts of the play it can be excused as the handiwork of the ever-entertaining Shakespeare. There are theories that Olivia and Viola are designed to be the mirror images of each other (as suggested by the spellings and pronunciation of their names). Olivia chooses to mourn more than required. Viola deflects her attention from grief by jumping headlong into a new life. Olivia wears dark veil to symbolize mourning. Viola is forced to disguise herself as a man.

Olivia refuses to see the love of the person who so resolutely pursues her. Viola is unable to tell her love to the man, she loves most. Olivia easily changes her affections from Cesario (Viola in male disguise) to Sebastian. Viola clings to her hope through thick and thin to achieve what she loves and deserves. Question 2 Instances of Viola’s (in male garb) gender coming into question. Early on in Act I, Viola is shown to have become the favourite of Orsino within three days and she is chosen to carry a message to Olivia.

When Viola tries to refuse, (after clarifying to the audience in an aside that she has fallen in love with Orsino herself), Orsino goes on to explain why Olivia might listen to Cesario – because he was as pretty as a woman with the similar shrill voice and rosy lips like that of the goddess Diana. This obvious reference to Viola’s beauty not only brings her gender into question but also suggests that Orsino is also attracted to Viola beyond a mere male companionship or bonding. In her, she finds the attractions of a beautiful woman which are hard to explain.

“Diana’s lip / Is not more smooth and rubious [i. e. , rosy]” “[i]s as the maiden’s organ, shrill and sound, / And all is semblative a woman’s part” (I. iv. 30–33). Similarly when Viola in the guise of Cesario goes to meet Olivia, she falls head over heels in love with him and starts pursuing her own romantic angel with him(her). It is left to Viola to deflect these attentions in as fit a manner possible without giving up her gender identity. —“I have one heart, one bosom, and one truth, / And that no woman has, nor never none / Shall mistress be of it save I alone” (III.

i. 148–151). This declaration that she shall never have any mistress in her heart is an explanation that leaves several things comfortably unexplained. The third and touching instance of a gender confusion involves Viola’s likeness to her brother Sebastian. When Antonio who loves Sebastian very much comes into Olivia’s house to find Cesario (Viola in disguise) being challenged to a duel with Sir Andrew, he takes it upon himself to save his friend. At the same time, several Illyrian officers burst into the scene and arrest Antonio.

Since he requires his purse to buy a bail baond, Antonio asks Viola to give him his purse ( that he gave Sebastian in Act III, Scene iii). Viola declares that she does not know him. Upon this Antonio cries out in anguish that his dear friend Sebastian has betrayed him. In this scene, Viola’s gender is questioned by Sir. Toby and Sir. Andrew as they consider him to be male and challenge him to a duel. Similarly Antonio, mistaking Viola to be Sebastian, accuses her of betrayal.

His cries of anguish are more genuine expressions than many conceited feelings of affectations that abound in the play. “In nature there’s no blemish but the mind. / None can be called deformed but the unkind” (III. iv. 331–332). Since the entire play is based on the premise of mistaken identity, which is compounded by gender confusion, it is but natural that there are several instances where Viola’s gender comes into question. But all these instances only add to the intrigue of the plot and the ultimate culmination of the comedy.

Contrast of Responses to Grief Between Olivia and Viola. (2017, Mar 09). Retrieved from http://studymoose.com/contrast-of-responses-to-grief-between-olivia-and-viola-essay 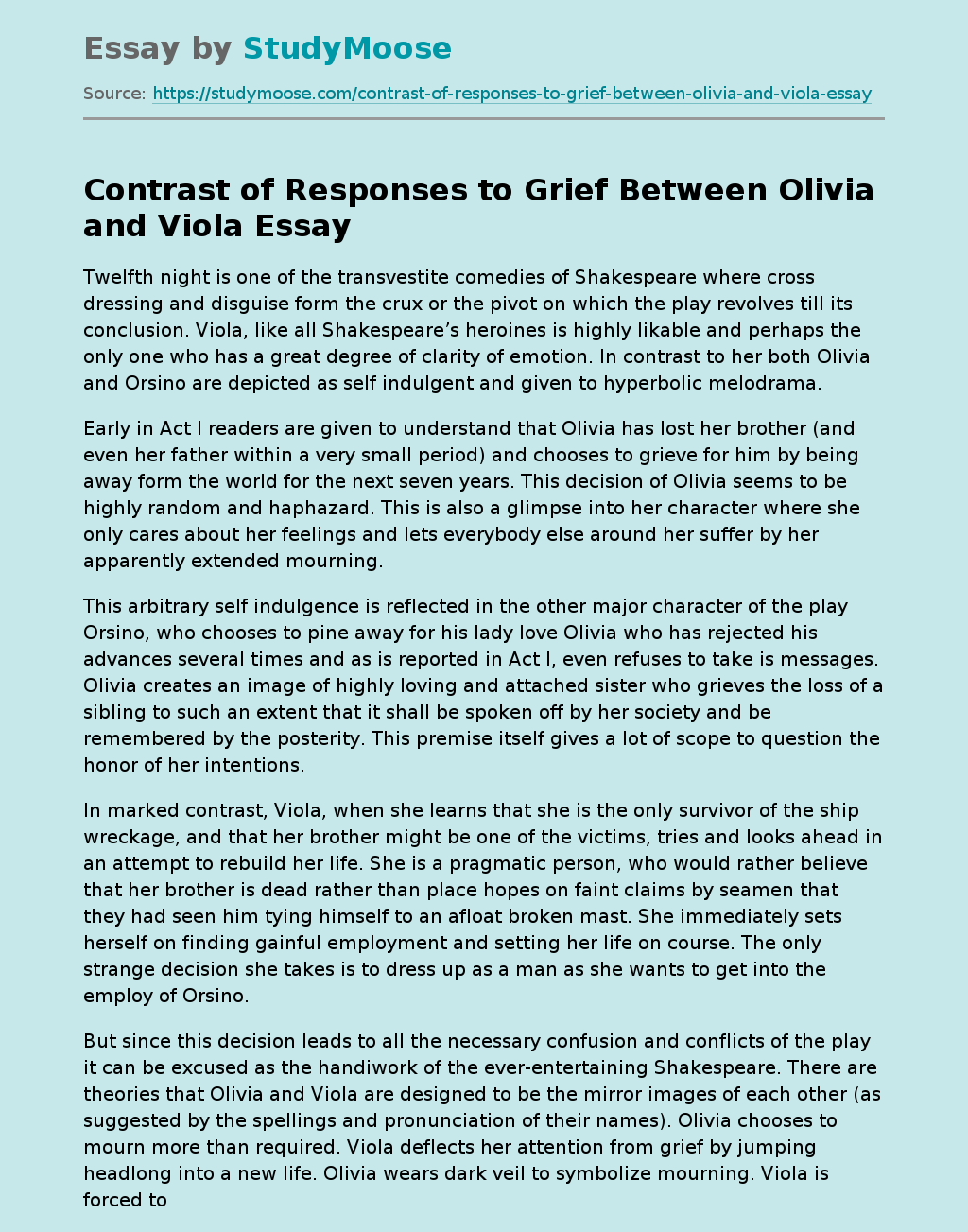