How did Great Britain, France, and the United States respond to the Great Depression?

In Great Britain, there were economic difficulties. For example, the decline of several industries led to high unemployment. In 1929, the Labour Party, which was the largest party in Great Britain, couldn’t solve the problems and fell from power two years later. A new government brought Britain out of the worst stages of the depression by using budgets and tariffs. Britain wouldn’t go as far as deficit spending, though.

France had become the most powerful power in Europe at the end of the war, and wanted to rebuild the parts of France that had been destroyed by the war.

Don't use plagiarized sources. Get your custom essay on
“ How did Great Britain, France, and the United States respond to the Great Depression? ”
Get custom paper
NEW! smart matching with writer

However, no French government was able to solve the financial problems at that time. Because France’s economy was more balanced, it felt the effects after the other countries did. However, when it did, there was political chaos. Eventually, Communists, Socialists, and Radicals formed a Popular Front government. The Popular Front made the French New Deal, based on FDR’s New Deal.

It gave the right to do collective bargaining, 40 hour work weeks, two-week paid vacations, and minimum wages. However, France didn’t have much confidence in this system.

In the United States, the industrial production fell to 50 percent of what it was in 1929. Franklin Delano Roosevelt, also known as FDR, pursued a policy called the New Deal. It created the National Recovery Administration, which required government, labor, and industrial leaders to work out regulations for each industry. However, it was declared unconstitutional by the Supreme Court, which said that the government shouldn’t intervene in the economy.

The NRA was replaced with the Second New Deal and the Works Progress Administration. The WPA employed many people to build bridges, roads, post offices, and other buildings, so people could be paid and get the economy going again. The New Deal did not solve the unemployment problems of the Great Depression, though. Only World War II brought the United States workers back to full employment.

How did Great Britain, France, and the United States respond to the Great Depression?. (2016, Jul 01). Retrieved from https://studymoose.com/how-did-great-britain-france-and-the-united-states-respond-to-the-great-depression-essay 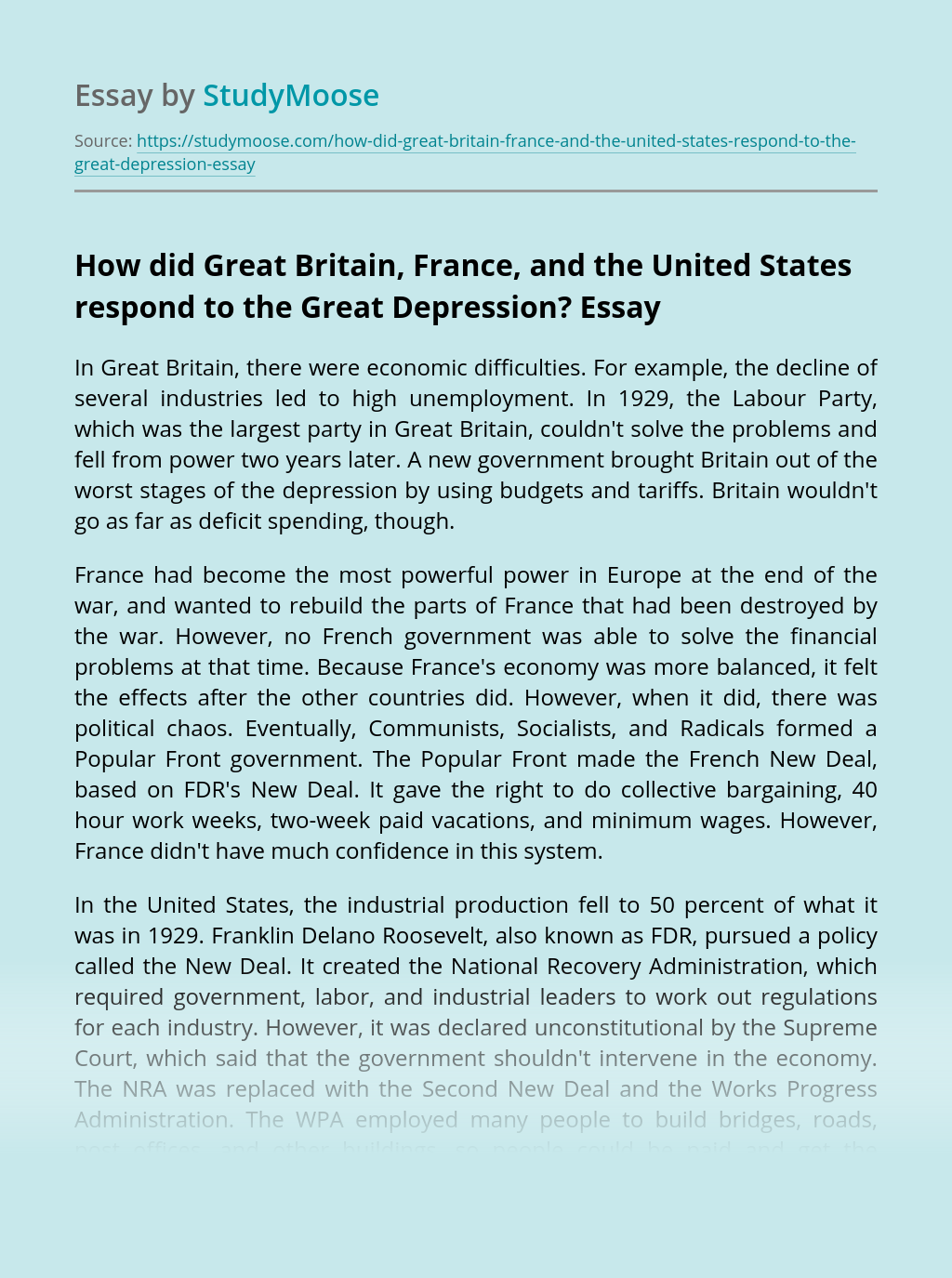