Throughout the history of America, urban cities have grown throughout the country and have influenced virtually every economic, social, and cultural movement between the Civil War and WWI. During the Gilded Age and the Progressive Era, which, combined, lasted from the 1880s to the 1920s, there was a large influx of immigration and urbanization which drastically changed the country. However, there are certain factors that caused this monumental growth in our country. This rapid growth was fueled by advancements in technology, industrialization, rural to urban migration, and European immigration to America.

Don't use plagiarized sources. Get your custom essay on
“ Urbanization DBQ ”
Get custom paper
NEW! smart matching with writer

However, there were many challenges included with the rising populations of cities and urbanization of America, which were responded to by introducing new political, social, and economical innovations. Immensities in technology, such as the electric light, indoor plumbing, and telephones also lured people to the city. The electric light was a highly sought innovation, seen as a “…flood tide of beautiful white light…emitted from the handsome black lamps” (Document B).

However advanced the cities may have been in their technology, they had deplorable conditions. Problems in the city included overcrowding, crime, disease, poverty, exploitation, little sanitation, and pollution. “These narrow alley-like streets were one mass of litter. The air was laden with soot and dirt. Ill odors arose from every direction.” (Document H). The perfection of tenants and apartments attempted to alleviate overcrowding by putting as many people as possible into small buildings. Industrialization brought many positive effects to the growth of cities. Jobs were created with the emergence of factories, which raised the economy with employment.

However, these factories introduced many negative aspects. The government doesn’t protect its workers at first, and workers must compete with each other for low-skill jobs. These jobs were highly dangerous and the workers faced horrible conditions, including poor ventilation, abuse, 12-16 hour workdays, no breaks, low pay, and sexual harassment. Children of young ages were forced to work in this dangerous environment due to poverty, but were paid less because of their age.

“We know some of the insanitary evils of tenements and factories; we know of the neglect of the street child, the aged, the infirm, the crippled…” (Document H). What ultimately helps with these poor working conditions are reform movements and labor unions. The National Labor Union and the American Federation of Labor sought to gain rights for workers through picketing and strikes. Rural to urban migration occurred due to decreased opportunity for farmers from the mechanization of agriculture. “They said, higher wages…The people in her home town had been approached by agents but doubted. She herself could not believe. Went home and told her son…and urged him to go and see for himself. He left in December, in 3 weeks he wrote home. “Everything is just like they say, if not better.”” (Document J). The lure of a higher education also brings many young men to cities to gain better jobs for possible opportunities. “…Which prevails in the rural districts and gives the farmers’ boys a glimpse of a more attractive life, without teaching them how to attain that life at home.” (Document F).

There were multiple reactions to poverty throughout media, which either attempted to alleviate the problem, or dismissed it. “The Gospel of Wealth” by Andrew Carnegie spoke about the duty of the rich using their money for the betterment of society and to aid the poor. Horatio Alger claimed that wealth was attainable if one would only work and strive for it. Social Darwinism gave a reason for the many poverty-stricken people in cities by claiming, “There is not a poor person in the United States who was not made poor by his own shortcomings.” William Graham Sumner supported this view and believed that aiding the poor would hinder progress. Throughout the Gilded Age and the Progressive Era, a large influx of Asian and European immigrants came to America. Most of these new immigrants came from countries with very little democracy and sought to make a better life in America. However, these New Immigrants were not completely welcomed in America.

Many were despised because of nativism, the idea that immigrants were to be blamed for the nation’s problems. People such as Rev. Josiah Strong despised immigrants and their impact on cities. The Workingmen’s Party of California called for the exclusion of the Chinese from the U.S., claiming they were taking jobs that should belong to Americans. Most of these immigrants were illiterate and struggled to maintain their cultures in America, people of the same cultural backgrounds grouping together and creating small cities such as Chinatown and Little Italy. Many of these immigrants came to America, poor and jobless. Hull houses, created by Jane Addams, helped these new immigrants by providing child care, helping to teach English, and aiding immigrants with coping with big-city life.

However, there was a large amount of immigration that led to overpopulation. This was slightly alleviated through the Chinese Exclusion Act of 1882, which ended Chinese immigration until the 1940s. Overall, many factors led to urbanization in America during the Gilded Age and the Progressive Era. With these factors came many challenges that were overcome through innovation and change. Through new technology, industrialization, rural to urban migration, and immigration, America continued its path of urbanization into the large, well-known cities which dominate the map today. 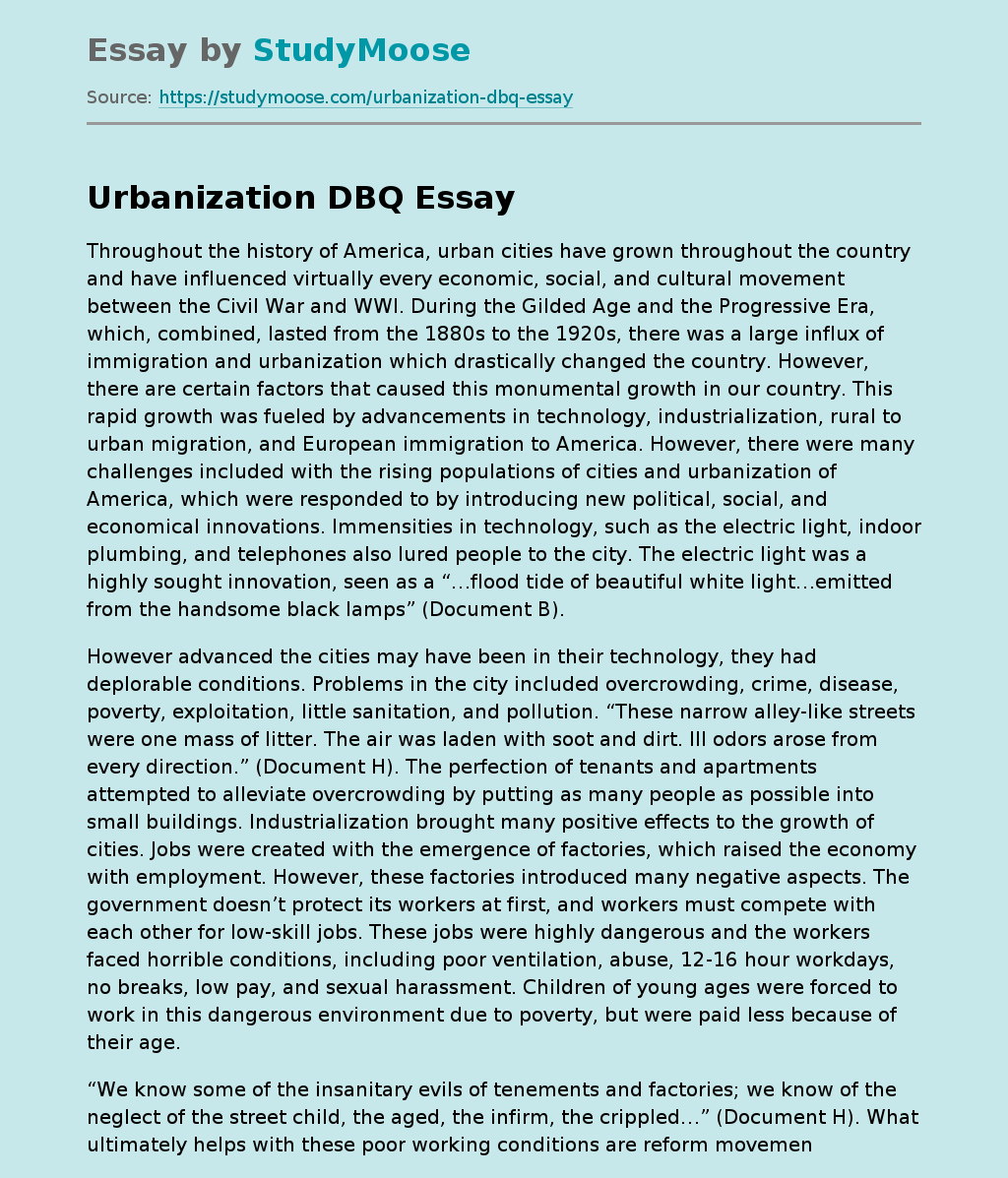