How Time is expressed in Bill Viola’s ‘Room for St John of the Cross?

This video and sound installation by Bill Viola, ‘Room for St John of the Cross’, speaks of the concept of time in a number of different ways. It consists of a black cubicle in the centre of a darkened space. A small window reveals the interior of the cell which is a softly lit space containing only a table with a pitcher, a water glass and a video monitor. Projected behind the cell is a moving image of mountains with storm clouds accompanied by the sounds of a storm.

Don't use plagiarized sources. Get your custom essay on
“ How Time is expressed in Bill Viola’s ‘Room for St John of the Cross? ”
Get custom paper
NEW! smart matching with writer

A voice whispers in Spanish some of St John’s poetry.

St John, a poet and mystic was imprisoned for 9 months in 1577 in a cell so small he could not stand within it. During his imprisonment he wrote mystical poetry concerned with transcending events and barriers in search of the Son of God, poetry that has been handed down to us in the modern day, so his poetry could be said to transcend time.

The cell a three dimensional object, represents the fourth dimension, that of time, 9 months of his life. This is the period a child spends in the womb, curled and unable to stand, before birth. The mountains would perhaps represent eternity as they are so unchanging.

The moving clouds show that time is passing, but the storm may signify chaos of the earliest period of creation. The clouds could also represent an ability to rise above the events of each day – which included regular beatings. The water and the light within the cell could represent the eternal life giving power of God, which St John found each day.

God moved upon the face of the waters freshly each day, creating order out of the chaos in which he found his life to be. In ‘The Dark Night’ which may be one of the poems composed during this period he wrote

’all things ceased; I went out from myself, leaving my cares. ’ (as translated by Kieran Kavanaugh and Otilio Rodriguez,) Despite severe oppression, deprivations and physical difficulties, he was in ecstasy and time was forgotten.

How Time is expressed in Bill Viola’s ‘Room for St John of the Cross?. (2017, Mar 21). Retrieved from http://studymoose.com/how-time-is-expressed-in-bill-violas-room-for-st-john-of-the-cross-essay 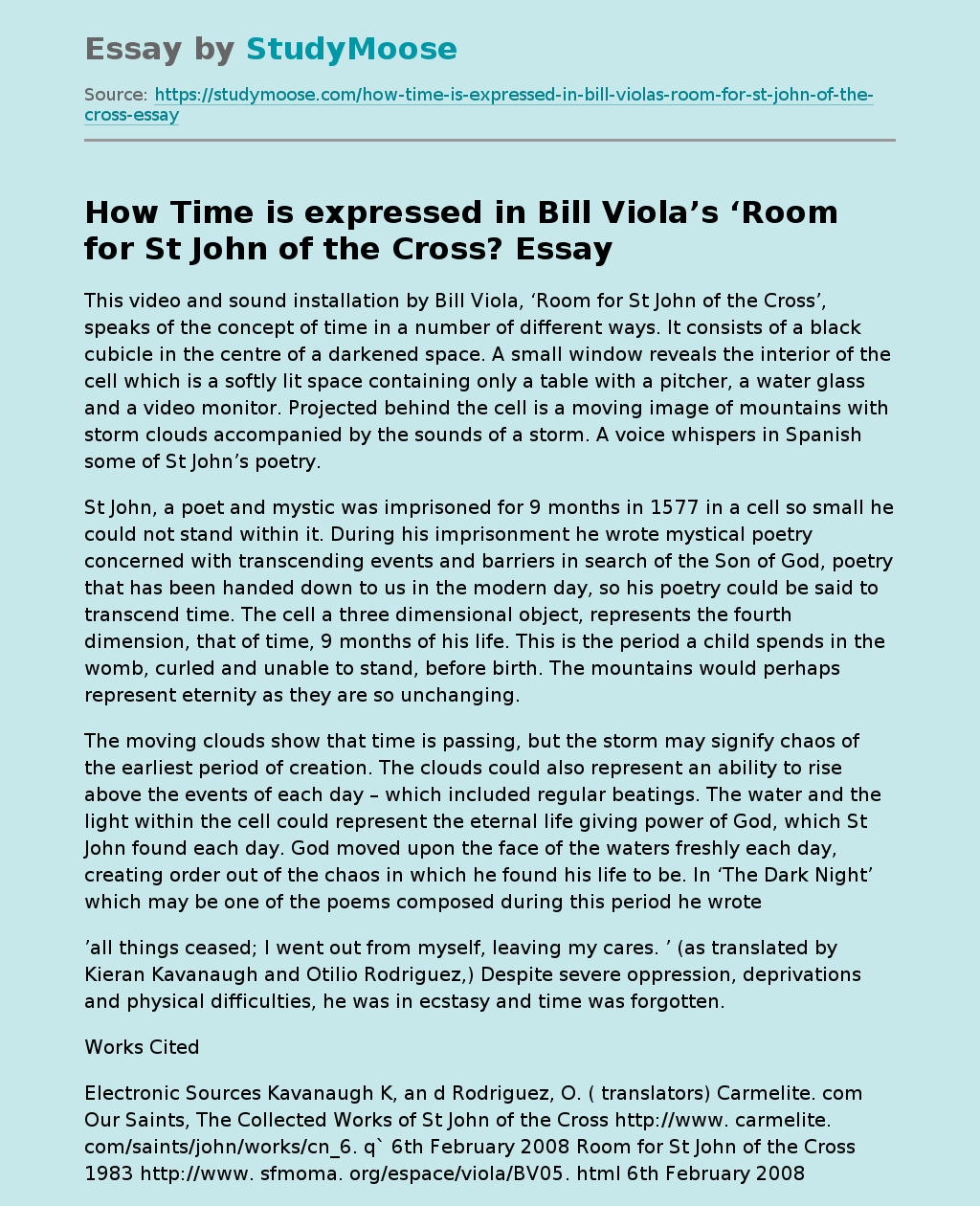