Ethical views expressed in 'Lord of the Flies'

In this human world, wherever we turn there will always be conflict. No human is perfect, and all humans err. Therefore we should understand that to err is only human, and to forgive is divine. The ethical views expressed in the renowned bestseller novel, Lord of the Flies, brings into perspective the ever changing external and internal conflict that lies within each of us. None of us can quite identify with and comprehend what is passing through another’s mind, but we must make allowances for their doubting too.

Don't use plagiarized sources.
Get Your Custom Essay on Ethical views expressed in ‘Lord of the Flies’ Just from $13,9/Page

An example of this would be found on page 19, after Ralph is nominated chief and the author states that even the choir applauded; and the freckles on Jack’s face, disappeared under the blush of mortification, (Golding, 1954). This also shows us that it is merely natural and human nature to display or conceal feelings of jealousy and contempt for each other. A common aspiration that we all seek to achieve, is the ambition to be somewhat of a perfectionist.

Although we all desire to obtain level of perfection; we must be able to understand that nobody in this human world is perfect.

For example, in the novel it is clear that however hard Ralph tries to be an ideal chief, there are always several obstacles in his path which provide a number of difficulties. On page 209, Ralph converses fearfully with Samneric about the things that had gone wrong and how Jack took over the whole, unsuspecting tribe. Here Ralph states, “What have I done? I liked him- and I wanted us to be rescued.” In addition to that we should all be able to realize that there is no utopia, in which we can live and survive alongside each other. At the beginning of the book it was made poignantly clear as the young boys expressed their carefree ways that they thought that an island without adults was absolutely perfect. Little did they know what was in store for them. This information is displayed on page 31 where Ralph tells the solemn group of kids that there were no grown-ups on the island. The kids were all quiet then, contemplating how their life would be affected now that there were no adults to look after them.

While reading this spectacular, fascinating novel, I was intrigued by the fact that it displayed many deep, hidden emotions and facts. It was certainly unambiguous that this book was a symbol and represented a smaller version of our world, as we perceive it today. Modern society is sometimes based more on imagination, than on the reality that actually surrounds it. Within the pages 36-37 of this book, Lord of the Flies, Ralph tries several desperate attempts to try to shake the futility out of the boys, by encouraging them to be more responsible, by keeping a watch on the fire and ships that should by chance miraculously pass by. Another point to consider is that society will never survive without any responsible figure or any set of laws and regulations. This information can be proved on pages 18 and 19, where the children decide to have a vote, as to who would be the person to lead them and take the privileged honour of being their chief. The conch can also be a symbol of rules, as the person with the conch had the right to speak, and those who were there had to respect and listen to the person who wanted to view and voice their opinions.

The exception for this rule was that Ralph, as the chief could interrupt any time. I found this information on page 31 of this spellbinding novel. However, society will not always obey the rules and do justice. An example would be on page 139, where Jack questions the authority of Ralph, the current chief. Here Jacks inquires the vote of the rest of the boys present, as to which of them didn’t want Ralph to be chief of their tribe anymore. When Jack did gain control and leadership of the rest of the tribe,(pages 167 and 168) it just goes to show that man instinctively wants to rule supreme over each other, and humans will definitely repeat themselves. It is also a known verity that people are blind to reality. It is also possible that we as humans can cause the downfall and corrupt our society. For example, this novel demonstrates that the mistakes made by the children, added to the list of growing controversies that played a major part in the miscellaneous distortions of the society, as a whole. Therefore it is without doubt wise to think before you act, and consult all you options before diving headfirst into something that will cause a lot of trouble in the long run.

I would have been more appropriate if Ralph had not allowed Jack to become such a close friend of his, as I feel that it helped spark the malicious contempt that Jack had possessed. This was first displayed on page 19, where Ralph commanded Jack to be the head of the hunters. Our nature will always get the better of us and destroy us. Hence, we should be able to differentiate between right and wrong. It is understandable that sometimes, this might not always be the case. The person involved might be unable to decide things for themselves or be swayed by a very strong point of view or opinion. On page 166, Jack leads a new tribe, and questions the others who want to join the tribe. This caused chaos, as the group of boys that were once bound together in one tribe, were deserting Ralph. After all, united we stand, divided we fall. Without agreeing on absolutely everything, we will succumb to failure.

And as technologies, theories and opinions improve and decline, we are only contributing towards destruction of the human race. After all, aren’t we all opportunists? Ethics- a word most of us know, but fail to recognize and understand the concept behind this word. For people to understand, they should be open minded and aware that ethically speaking it is wrong to judge other people’s ethics by your standards. As humans, we all differ in every single way. Golding is one the few people who has the superlative ability to wrought a compelling, realistic, symbolic masterpiece that enable mesmerized readers to look deep within themselves and fully understand the true meaning and the underlying tendencies that surround everything in this world. In conclusion I would like to commend Mr. Golding on the wonderful, riveting modern classic, Lord of the Flies that is sure to enthrall readers of all ages for a long time to come.

Ethical views expressed in ‘Lord of the Flies’. (2016, Jul 08). Retrieved from https://studymoose.com/ethical-views-expressed-in-lord-of-the-flies-essay 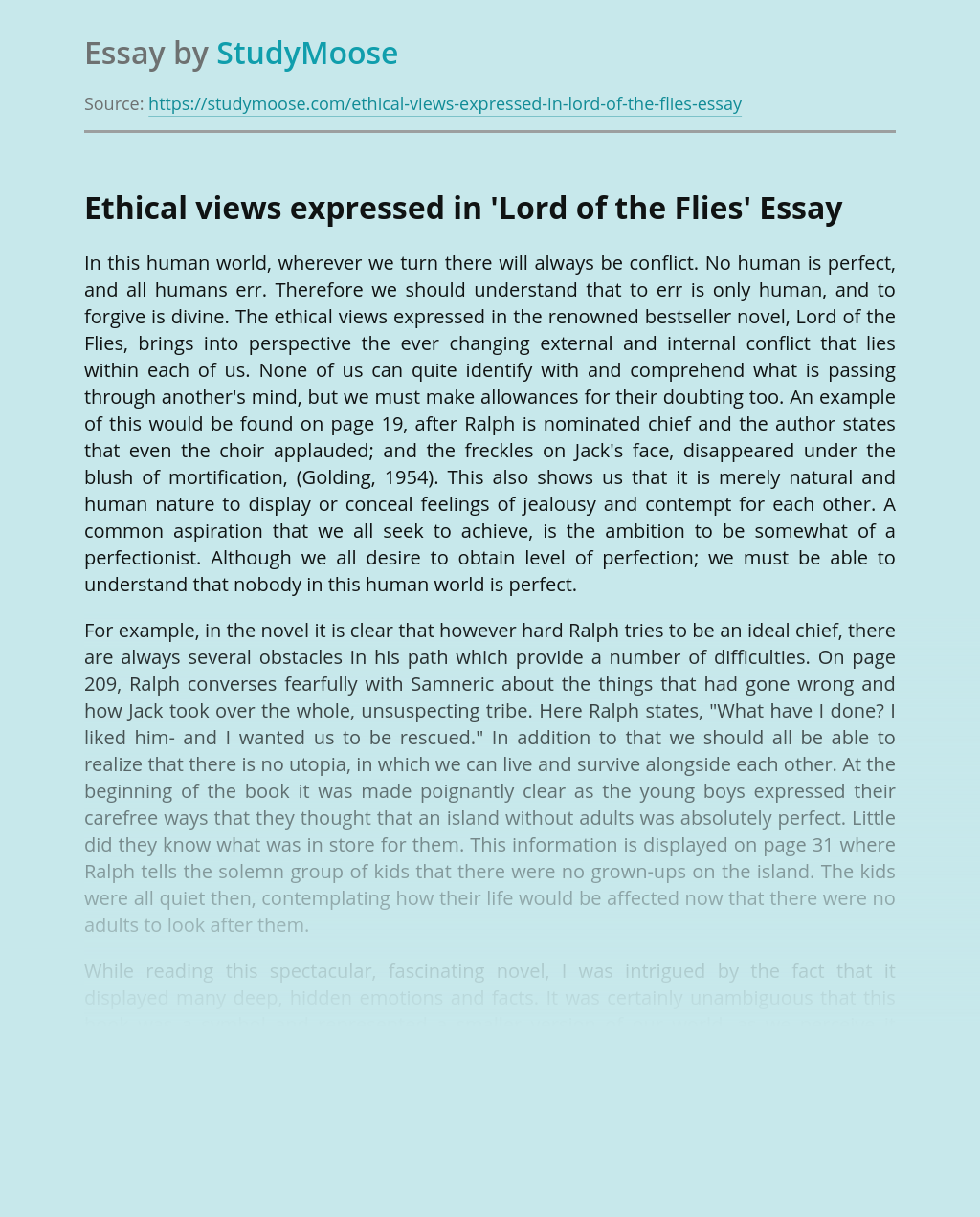 In his poems and stories, Edgar Allen Poe typically returns to the same themes: loneliness, lost love, madness, and depression. In his poem, “The Raven”, his theme is grief, which is also connected to the string of themes he generally incorporates into his works. Nevertheless, for this particular poem, Poe utilizes a plentiful quantity of...

Slavery Issues in The 1850 Compromise

In 1850, Henry Clay one of the most influential political leaders in American history introduced a set of resolutions, which aimed to please both North and South America. The five proposals were rolled into a single ‘omnibus’ bill, which offered a solution to the growing sectional conflict over slavery and westward expansion, which arose from...

Get Essay
Karl Marx and Capitalism

The Strong Breed by Wole Soyinka

A symbolic play in a greater extend, Wole Soyinka’s play “The Strong Breed”, is all bout the rituals and superstitious believes prevailing in the African society. Wole Soyinka is perhaps the most misunderstood, exceedingly controversial figure in the Nigerian public and literary life. The theme of the need of the societies to sacrifice one of...

In this controlled assessment I am going to explain in my own words and by using quotes from the book how George Orwell refers to at least three conflicts in the fable Animal Farm. George Orwell wrote the controversial book Animal Farm, and very nearly didn’t get it published. But in 1945 Secker and Warburg...