The Roman rulers from ancient times are well-known for their ability to coax their people into thinking a certain way through the use of convincing pieces of art. The Roman Empire was very troubled and its emperors are infamous for such things as lavish spending, unnecessary war, and even the killing of family members, and this begs the question: how were there so few large scale revolts of the Roman populous? The answer is the use of propaganda in popular Roman culture.

Turn in your highest-quality paper
Get a qualified writer to help you with
“ Roman Propaganda Expressed Through Art ”
Get high-quality paper
NEW! AI matching with writer

Adding family values to art that depicted a Roman ruler’s kin instilled trust into the emperor’s regime and was a very common practice. The Romans were notorious for their murder of their own family members in order to gain power, which aroused question of the empire in its citizens. Of course the last thing a ruler would want to happen is to be overthrown by his people so Roman rulers quickly devised a way to reestablish the citizen’s faith in the emperor, which just happened to be the integration of propaganda into art pieces.

One prime example of this is the Tellus panel on the Ara Pacis. On this panel we can see Tellus, the Earth, who represents the fertility of the royal family and perhaps hints at the godly power that the royal family held. Another example of the addition of family values to a piece of art is Painted portrait of Septimus Severus.

This work depicts the royal family with one member of the family, Geta, with his face rendered unrecognizable. The story behind Geta is that he was murdered by his brother, Caracalla, so that Caracalla would have ultimate ruling power. Oddly enough etching out Geta’s face was a form of propaganda that incorporated family values because it made its audience “forget” about Geta so that the general population would not remember the tragedy that fell upon this “perfect family”. In the long run the rulers of ancient Rome used propaganda in public art works to suggest a peaceful and powerful royal family, even though that is the opposite of chaotic and often changing rule of the empire.

War scenes depicting victory and generally good deeds by the Roman Emperors and rulers were very powerful tools in persuading their citizenry to invest trust into those who are in power. Some find it astounding that there were so many large Roman defeats and failures in war and societal projects that the people never found out about, but when the good actions of the empire were so emphasized it would be difficult to think that one’s government is doing a bad job of ruling the empire. One of the most famous examples of propaganda in art was the narrative frieze and the surrounding works that can be seen on the Column of Trajan. On the top of the column there is a statue of Trajan which perhaps suggests to the viewer that Trajan was a great contributor to the city of Rome.

The forum that surrounded the Column was itself a piece of propaganda that showed the massive amounts of plunder Trajan gained from the military conquests that he went on, which was immensely important at that time because many thought that war would only further bring the empire into debt. On the frieze the audience can see that Trajan is trying to make war look more peaceful than it actually was, displaying the Roman army in total control during the battles. The column, frieze, and the surrounding forum all memorialize Trajan and allow for the continual pursuit of his military conquests. Another example of an emperor using propaganda to further his wishes and make him look great is the Arch of Constantine.

On the Arch of Constantine a plethora of works depicting the triumphs of his predecessors can be seen, which he uses to his advantage, as if he was proposing the idea that he was as great as the other emperors. In fact, he even goes as far to replace the heads of the other emperors on the arch with his own like he was responsible for the many good deeds that they had done. One example of this is a relief where Hadrian is sacrificing an animal to Apollo and then hunting boar, except Hadrian’s face is replaced by Constantine’s. This stealing of works was probably a way to gain favor with the populous for himself as well as the next ruling emperor. All in all these two monuments to their respective patrons were highly effective pieces of propaganda that may have been responsible for a less rebellious empire.

To look back upon the propaganda used by the Roman Empire, it seems particularly ingenious that they accomplished such a feat. To keep an empire with that many problems, problems that could undermine even the greatest leaders, relatively stable is astonishing. In conclusion, through propaganda in art that depicted victorious war campaigns, successful emperors and a halcyon family life the Rulers of ancient Rome were able to extend their respective time in power as well as increasing their already great legacy. 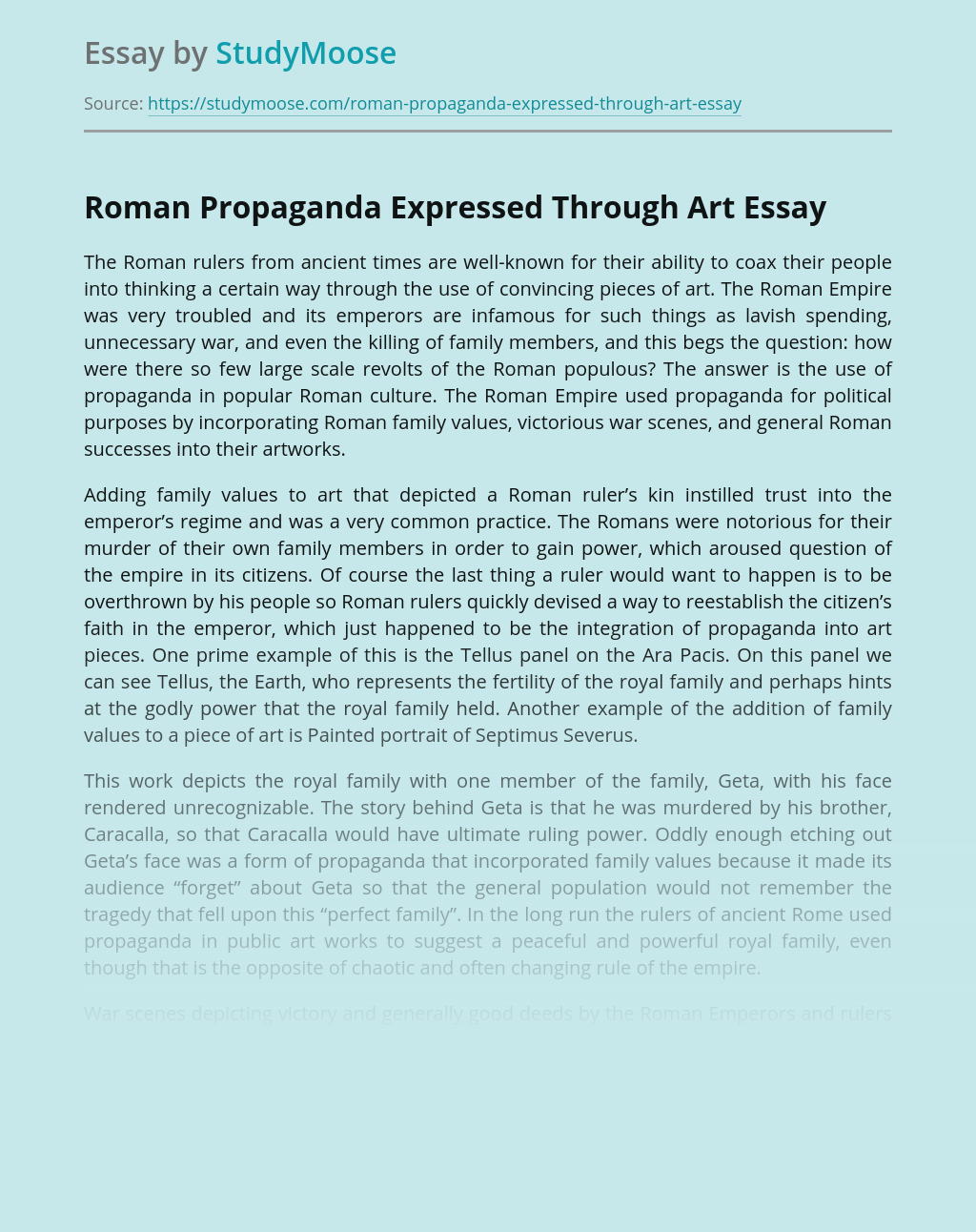 Turn in your highest-quality paper
Get a qualified writer to help you with
“ Roman Propaganda Expressed Through Art ”
Get high-quality paper
Helping students since 2015
Stay Safe, Stay Original