Censorship and Propaganda Under The Castro Regime

Since the commencement of Castro’s regime, Castro has used propaganda and censorship techniques to conceal his country from outside views. Propaganda in Cuba has been instilled in its citizens’ culture as well as entered the Latin American communities. Censorship in Cuba ranges from the facade of free education and health care to the restricted access to particular websites. Censoring these techniques help the Cuban people remain bias towards the ideas of a communist/socialist government. Although some insurgents defy the government daily, their influence isn’t sufficient enough to spike a revolution as Castro once did due to the outweighing strategies mentioned above.

Don't use plagiarized sources. Get your custom essay on
“ Censorship and Propaganda Under The Castro Regime ”
Get custom paper
NEW! smart matching with writer

It is indisputable that propaganda and censorship remain profoundly embedded in the Cuban regime and will continue to incline its people towards socialism/communism.

Before Castro’s victory over the Cuban people, Cuba had major social class and racial differences to a corrupt government. The PBS article, ‘Pre-Castro Cuba,’ by under subheadings ‘Success by the Numbers’ and ‘Inequalities,’ emphasizes that while Cuba had a flourishing economy, high life expectancy, and literacy rate, the lower class lived in extreme poverty and for the most part had no education.

The Cubans suffered from malnutrition and transportation/infrastructure, denying them the opportunity to reach hospitals quickly when ill. It is clear that impoverishment sucked families into vicious cycles that propelled them further into poverty. Everyone in the countryside was illiterate and were blessed if they reached second-grade education. Inequalities between racial groups had also been part of this government before Castro (‘Pre-Castro Cuba’).

For example, the racism in Cuba was so strong that even Batista, the president at the time, was prohibited from entering these areas.

Unquestionably, inequalities were a huge dilemma in the government before Castro’s reign. It doesn’t end here; in ‘Batista, Ex‐Cuban Dictator, Dies In Spain’ by The New York Times, the corruption in Cuba under the Batista government had put an end to direct democracy by sabotaging elections, procuring control of as well as enriching himself by controlling Congress, the police, army, and universities, and omitting constitutional rights. It is logical to assume that sooner or later, a revolution was near; if not by Fidel Castro, then other rebels. All in all, the island was challenged by inequalities and ineffective rulers.

When Fidel overthrew Batista in 1959, he was a heroine to the Cubans that balanced out social inequalities and drove the country towards anti-discrimination. According to the article ‘Fidel Castro,’ written by New World Encyclopedia, in the few months he was in command, he built roads (600 in six months), homes to house the homeless, spent $300 million dollars on water and sanitation in the span of six months, and built schools, nurseries, and day-care for the geriatric and the young across the island. It is clear that Fidel would gain more support by improving many aspects of the island. For example, young parents and children would have shelter and care for their loved ones while at work, and homeless individuals would have a roof over their head, and poor children, as well as adults from the countryside, would have what they most desired education. Moreover, Fidel advertized Cuba as a paradise free of racial discrimination to attract visitors to the island (‘Fidel Castro’). Equality of people in Cuba was especially important amidst Afro-Americans. In 1959, it was the perfect time to gain the trust and support of darker skin people because it was a time before Martin Luther King’s speech ‘I have a Dream’ of 1963. Cuba was now a beautiful place, a place of equality and improvement.

The Biggest Myths in Cuba: Health and Education

The Republic shifted from a beautiful island to a country based on fables about free education and health care. The article, ‘Censorship in Cuba,’ by Viviana Aldous states that while these services are thought to be free, the government takes an enormous portion about 99% of their monthly salary if in a capitalist country. These large sums of money go towards education and health. On average, a civilian in Cuba earns $25 each month. In a capitalist country like America, we spend approximately 29.8% of our monthly salaries as taxes according to ‘What’s the average American’s tax rate?’ by Matthew Frankel. The one percent that the Cubans earn make the population equally impoverished as one can’t afford luxuries. If we subtract from the Cubans 99% to the US 29.8%, there is a 69.2% difference in the discretionary income that Americans get to utilize for spending, saving, or investing. The podcast, ‘Cuban Education,’ by Cubano Cuba states that after graduation, students are required to work three years in jobs given to them by the government to repay the Cuban regime for ‘free’ education (00:09:23-00:09:35). In other words, everything has a price especially the privileges offered to you by the government. It is evident that these services were compensated for by sweat and toil.

Another facade of education is the high quality of teaching and good condition classrooms. The exodus of teachers is an immense problem in Cuba. Many have left the profession to pursue careers that earn better wages. As a result, the students have larger class sizes, learn via videos, and have instant teachers fresh from high school (they teach to be granted admissions to universities when test scores are met requirements) (‘Cuban Education’ 00:03:00-00:03:48). Students lack hands-on activities and real explanations from experienced professionals, and even the instant teachers don’t know the subject before they teach it. Moreover, students are poorly fed (about the equivalent of a saltine cracker in the morning), have to bring water because their plumbing is too old to drink from (since the revolution began in 1959 to the present day plumbing has remained the same), and have no free lunch programs for the more impoverished students (‘Cuban Education’ 00:04:18-00:04:57). The promises of the revolution have lost their meaning, and what was once a prominent educational system has become misleading; however, the citizens believe that ‘free’ education is a gift; so no one complains. For the citizens of the island, this educational system is as good as it gets. The academies are in appalling conditions. From flaying paint to lack of materials, parents are challenged to pay for essential items such as light bulbs and brooms as well as fix the classroom decor (‘Cuban Education’ 00:05:00-00:05:20). These problems are non-existent in capitalist countries such as the US, the very nation Castro rejected. To Americans, it is challenging to imagine the constant struggles they are facing every day; our schools don’t lack fundamental necessities like there’s do. For example in Cuba, the books are out of date and filled with prejudice and pro-Castro information from the time frame of the revolution, and computers aren’t available either. The books and lack of computers is how Castro censor the island to suit the ideas of the Cuban regime. Classrooms and books in Cuba are outdated and a poor classroom environment show what poorly structured school systems there are.

Although 95% Cubans participate in ‘The Black Market’ and find ways to see or publish censored content such as illegally downloading movies and selling them around the street as ‘El Paquete,’ Cuba still has one of the lowest penetration rates in the world. There are many ways the government censors the internet. The first is that the internet is extremely expensive; it actively costs from two to five CUC an hour (about two to five US dollars) (Aldous 5). Since the monthly salary of a typical Cuban is about $25 US dollars, it’s logical that most can’t afford to use the internet on a daily basis. The second is that at this the internet is only accessed through Central Parks or at ETESCA (telecommunication centers placed at each city center) (5). Not everyone lives near the center of the city, so the long walks and high cost discourage many from using Wi-Fi. The third is that the government blocks certain websites from opposing views such as the concept of democracy (5). For example, Freedom House and the Cuban Free Press Project are one out of many blocked sites on the island because they strongly advocate the ideas of civil liberties. Cuba’s internet is difficult to access, and while some try to break the barrier by distributing ‘El Paquete,’ Cuba remains heavily censored.

The Use of Propaganda

Throughout and after Castro’s movement, propaganda was one of the most effective ways he spread his messages of a newly structured government. The article, ‘Cuba: Castro’s Apparatus and Foreign Policy,’ by Gilbert Robinson states that Castro used interviews, broadcasts of four hundred hours in eight languages to Europe, the Western Hemisphere, and Africa, ‘friendship’ institutions, construction a $25 million Palace of Conventions to promote Cuban prestige and cultural institutions, falsifying his death that to gain publicity, tapping into rebel radio stations like Radio Rebelde, sports, performing arts, and etc (Robinson 4-36). All these techniques won Castro widespread support from Latin American countries to European nations. Once he gained their support, his regime became fortified and recognized by the globe. On December 30, 1960, he created the Cuban Institute for Friendship Among People (ICAP) to show aliens the social and economic changes carried out by the revolution, and the Cuban Intelligence services recruited pro-Cuban foreign groups that eventually worked for the government in exchange for a tour of Cuba, even US groups came and joined the socialist fight (Robinson 20-36). Propaganda from Cuba had entered the anti-communist US, and some of the adversaries in the US became allies; this is precisely why Castro’s propaganda is so crucial to his image because he gained comrades. The most effective weapon that Castro ever had is propaganda because his ideas were spread from region to region.

In conclusion, propaganda and censorship are crucial in the Cuban government. They are used to keep the population satisfied and in check; nevertheless, some try and fight the government’s wishes by writing blogs and utilizing ‘The Black Market.’ From internet censorship to the subliminal messages of Communism/Socialism being brainwashed into the Cubans, spreading Fidelismo (Castro’s ideas) and blocking out outside opinions from spreading in the country is the number priority of the government. It is evident that Castro regime oppresses the rights of the people and forces opinions on Cuban population since the beginning of his reign.

Censorship and Propaganda Under The Castro Regime. (2021, Apr 05). Retrieved from https://studymoose.com/censorship-and-propaganda-under-the-castro-regime-essay 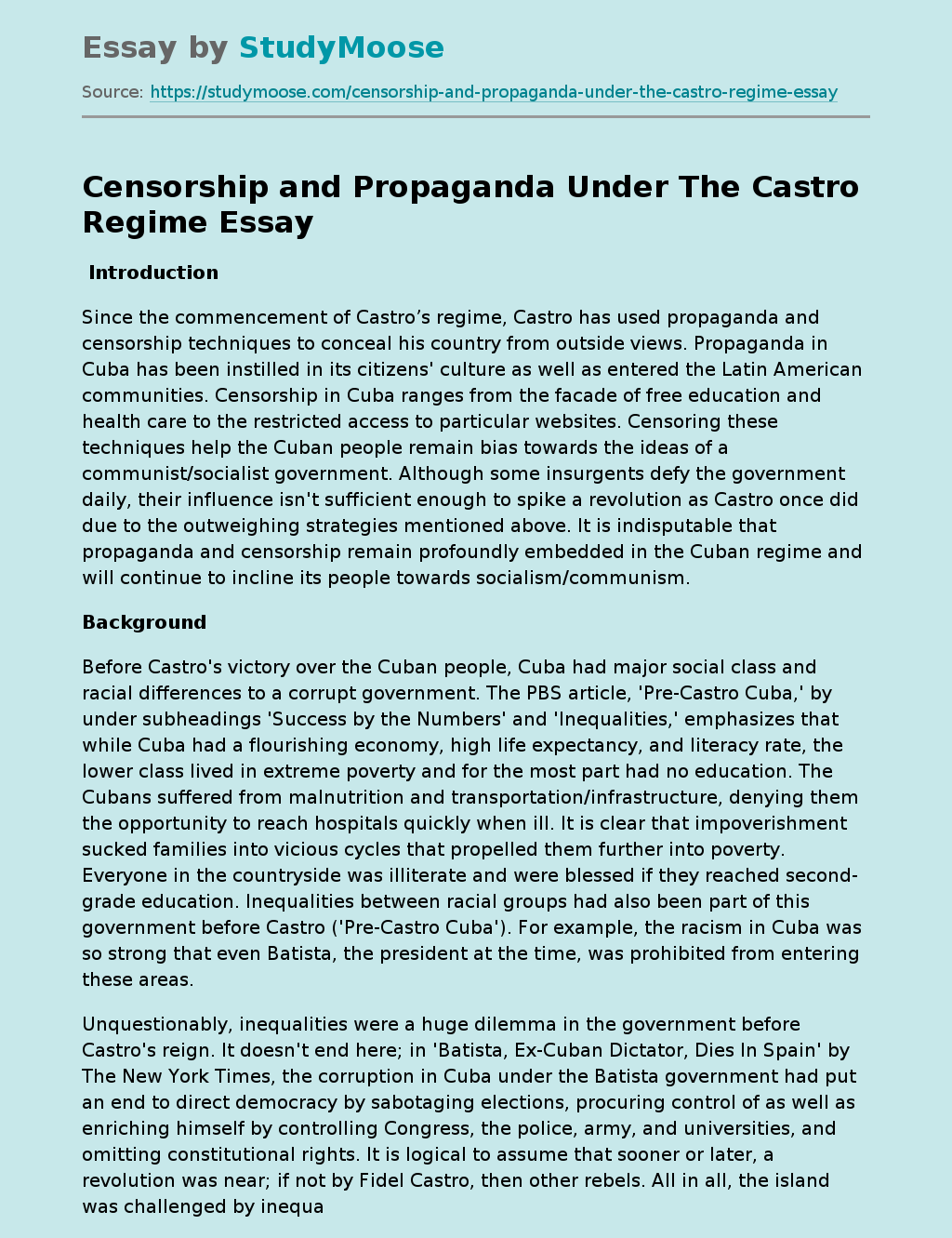