Turn in your highest-quality paper
Get a qualified writer to help you with
“ Rational vs. Non-Rational Propaganda ”
Get high-quality paper
NEW! AI matching with writer

Enlightened self-interest is probably the highest of effective motives. If politicians and their component always acted to promote their own or their country’s long-range self-interest, this world would be an earthly paradise. As it is, they often act against their own interests, merely to gratify their least credible passions; the world, in consequence, is a place of misery.

Propaganda in favor of action that is consonant with enlightened self-interest appeals to reason by means of logical arguments based upon the best available evidence fully and honestly set forth.

Propaganda in favor of action dictated by the impulses that are below self-interest offers false, distorted or incomplete evidence, which avoids logical argument and seeks to influence its victims by the mere repetition of catchwords.

In regard to propaganda and the early advocates of universal literacy and a free press visualize only two possibilities: that propaganda might be true, or it might be false. They did not forsee what in fact has happened.

In Brave New World non-stop distractions of the most fascinating nature (the feelies, orgy-porgy, centrifugal bumblepuppy) are deliberately used as instruments of policy, for the purpose of preventing people from paying too much attention to the realities of the social and political situations.

A society, most of whose members spend a great part of their time, not on the spot, not here and now and in the calculable future, but somewhere else, in the irrelevant other worlds of sport and soap operas.

In their propaganda today’s dictators rely for the most part on repetition, supression and rationalization – the repetition of catchwords which they wish to be accepted as true, the supression of facts which they wish to be ignored, the arousal and rationalization of passions which may be used in the interests of the Party or the State. As the art and science of manipulation come to be better understood, the dictators of the future will doubtless learn to combine these techniques with the non-stop distractions which, in the West, are now threatening to drown in a sea of irrelevance the rational propaganda essential to the maintenance of individual liberty and the survival of democratic institutions. 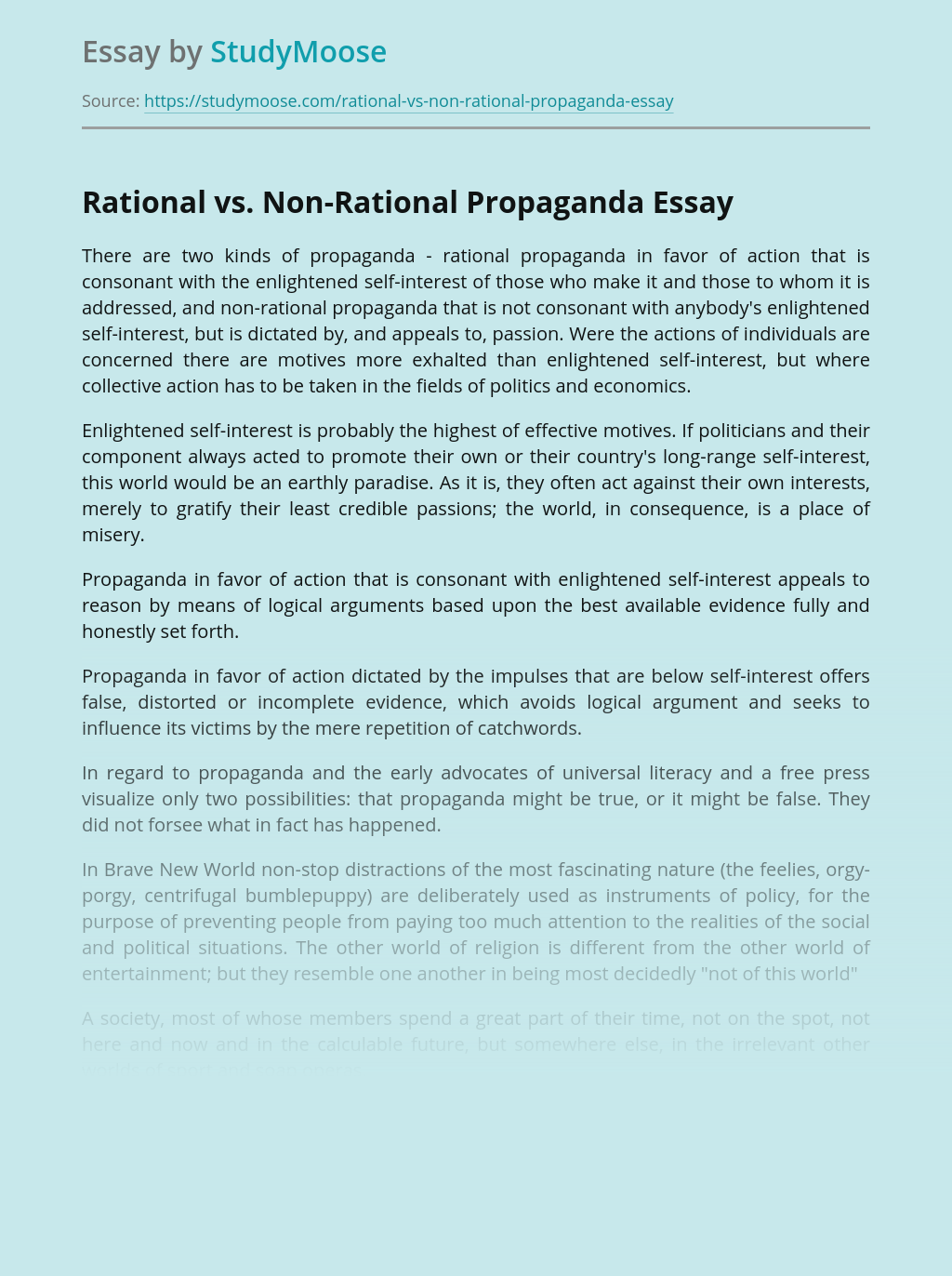 Turn in your highest-quality paper
Get a qualified writer to help you with
“ Rational vs. Non-Rational Propaganda ”
Get high-quality paper
Helping students since 2015
Stay Safe, Stay Original