The motives for European exploration

Europeans didn’t suddenly start exploring just because they could; there were many motives that led to European exploration and expansion in the 15th and 16th centuries. They made people confront the dangerous journey to the new colonies, a journey which killed about one half of the people who tried it. People were led by strong motives, and even if not all were exactly quite as important to European expansion, all of them played a part in it.

Taking in mind the medieval attitudes of people at the time, religion can be taken as a very important motive.

This was the major cause for the Crusades in the early Middle Ages, and the spirit of spreading Christianity didn’t die out. Instead, it changed to focus on the Muslims in Spain (finally thrown out of Granada by the Spanish Catholic Kings in 1492, that year marking the end of the Reconquista), as well as on the different tribes in Africa and new cultures in the Americas.

Religion took on an important role as several monarchs encouraged and sponsored exploration, many maintaining they did so for Christianity, even if wealth was their number one goal.

Religion, even if important, wasn’t the major cause. The motive which most influenced exploration and which was most important wasn’t spiritual, but economical. Many people left Europe in order to flee from their poverty in Europe, where the aristocracy controlled all the lands. In the new lands, they could try make a new fortune. The search of spices (very precious at the time, and very expensive) was also very important, as well as the search for gold.

Material profit was clearly what moved most people and made them want to explore, for this in turn led to rivalry between countries, as exploring countries gained wealth in the New World. Of course, other countries imitated them, also wanting wealth and power. It is clear that the desire to grow rich was what moved most of the people into the new lands… Not the desire to spread religion like a good selfless Christian would have done.

However, the desire for material profit, even if the most important one, wasn’t the only motive apart form religion. Due to the expansion of the Ottoman Turks, Europe was cut off from Asia. This led to a desire to find a shorter trading route, especially for the trade of spices and silks, as well as raw materials that could be used for new medicines to cure illnesses. Also, another motive to keep in mind was the Renaissance attitude of rediscovery, in which people were curious and started exploring.

Even if these were important, and did play a major role in European exploration (without the openness of mind from the Renaissance it would have been more difficult for people to dare cross the Atlantic), it is quite obvious that the major motive was material wealth. People saw new possibilities in the new lands, new ways to make profits, new untouched lands to settle and escape from their former lives and a new area to gain raw materials from. It was money which “inspired” people and made them go on, not some sudden strong, humble spiritual desire to just spread the love of God.

The motives for European exploration. (2016, Jun 20). Retrieved from http://studymoose.com/the-motives-for-european-exploration-essay 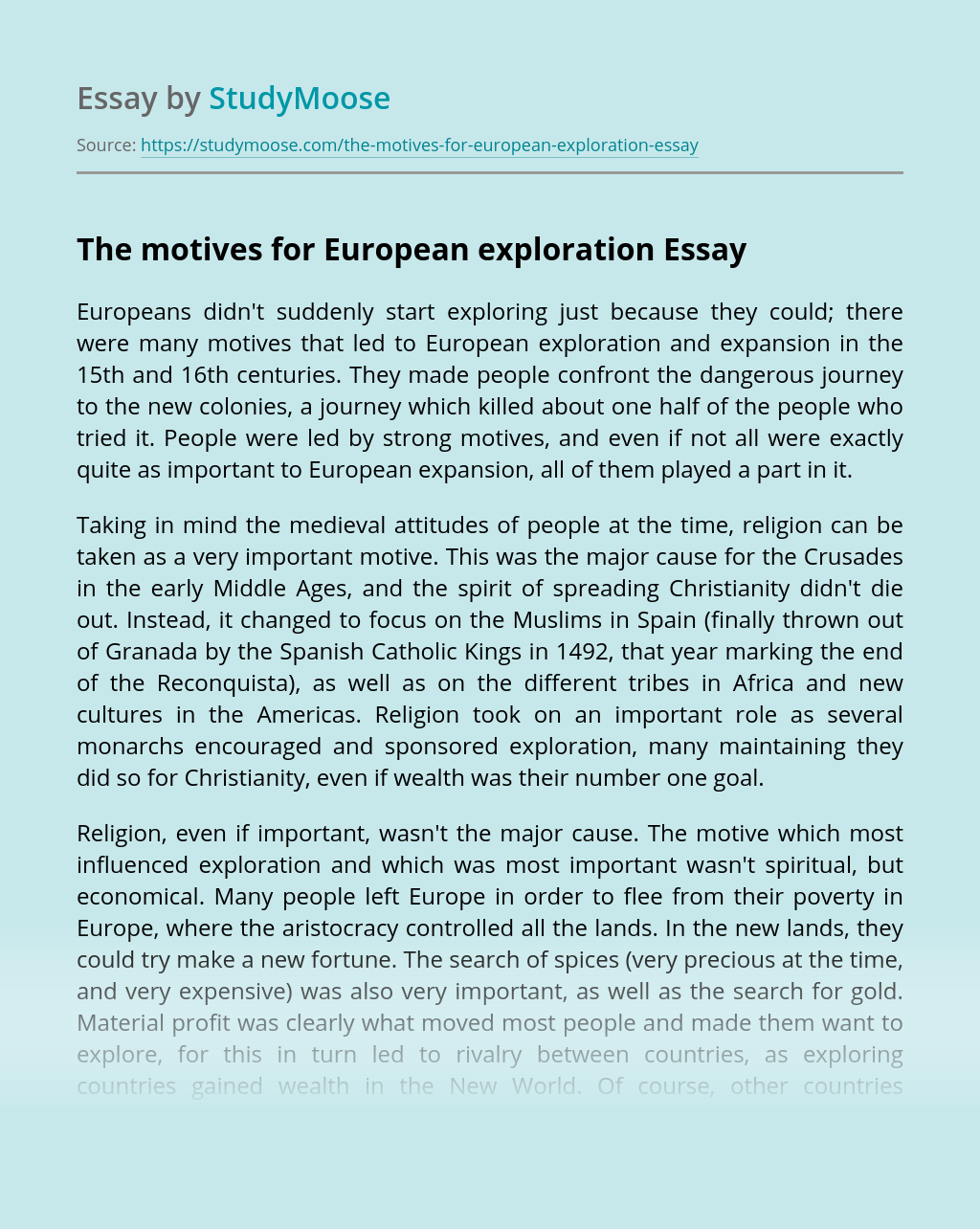 Don’t waste time
Get a verified writer to help you with The motives for European exploration
Hire verified writer
$35.80 for a 2-page paper
Stay Safe, Stay Original