Is it possible that the things we say and do are caused by hidden motives? Do subconscious thoughts influence our behavior or determine the way we act? And if so, does this mean that we may not necessarily know what we are doing at certain times? Such questions are important considerations in modern psychology. Psychoanalysis – the science of understanding the mind and how it affects human behavior – provides theoretical insights that attempt to explain why we do the things we do.

Don't use plagiarized sources. Get your custom essay on
“ The Family Dynamic ”
Get custom paper
NEW! smart matching with writer

In psychoanalytic theory, behavior is motivated by many factors, including how the family dynamic affects the individual. Familial relationships are important because every family member assumes a role they are given that affects the family as a whole. As a collective entity, what one person does affects others, for better or worse.

This family dynamic is distinctly illustrated in Death of a Salesman. The characters are unaware of certain things about their relationships that contribute to the way they behave.

As the audience, these things appear to us as clear as day because we have the perspective of an outside observer. But we are not so different from the Loman’s. We too are blind to certain truths. In real life, we don’t always get the chance to take a step back and realize what is happening around us. We don’t always know what we’re doing and why. The truth is, some of the things we say and do – whether intentional or not – are caused by things we may or may not be consciously aware of, and this in turn affects others.

In Death of a Salesman, Willy Loman is hard working, driven, and ambitious. He spends most of his time and energy trying to improve his life through financial and economic means. Unfortunately, this obsession destroys him! Society damages Willy through the myth of the American Dream, who turns to his children and harms them by extending and even magnifying those same values. “All work and no play” drives him insane. He is completely incapable of dealing with any of his problems. When confronted with reality, Willy uses several defense mechanisms – primarily regression – to avoid facing the present by reliving previous experiences in his mind. He’s too busy thinking about the past and worrying about the future to enjoy anything here and now. His continuous repression of what Freud called the “pleasure principle” ultimately leads to his suicide. What a miserable and tragic existence Willy’s later years were!

Who else was affected by Willy’s problems? Everyone else in his family, of course. His wife Linda, a generally weak character throughout the play, tries to encourage and support Willy, but she is in a constant state of fret and worry because of his instability. She knows that it’s only a matter of time before he leaves to “check the water heater” or “go for a drive” and not return. Sadly, she’s just waiting for the other shoe to drop. Their children are not unscathed from harm either. Biff catches his father having an affair with another woman in an attempt to alleviate his repression of pleasure. This shatters their relationship, changing it forever. Biff, who at one time just wanted to please and impress his father, now sees him as a fake and a coward. The respect he has for him turns to disgust. Willy’s expectations for Biff (none of which Willy himself could even live up to) are discarded when he learns of his father’s infidelity.

As a result, Biff moves to Texas for ranching and farming jobs, never settling down with much financial security. Happy epitomizes many of his father’s negative qualities, including his lust for women and money. He is the younger of Willy’s two sons, so he doesn’t get as much attention as Biff does from their father. As a result, he is closer to his mother and feels as if he is in conflict with his father for her interest and affection. This concept, known as the Oedipal complex in psychoanalysis, also explains why Happy is sleeping around so much, and why he feels so indifferent for the welfare of his bedmates. Death of a Salesman undoubtedly reveals key psychoanalytic concepts throughout the play. It demonstrates clearly that what one person says or does affects others; that social pressures can push a family into dysfunction; and that people can be defined by their family and understood through their sexual habits.

So what’s the point? What message is being conveyed to the audience in this story? That people inadvertently affect the lives of those around them? Or that escaping mundane reality with fantasies, flashbacks, or casual sex is completely normal? Ultimately, Death of a Salesman seems to suggest that there are hidden subtleties that affect our behavior. There are things beneath the surface, that we ourselves don’t fully understand or realize, that determine to some extent what we say and do. Life is influenced by many things that are simply beyond our control. Family, society, childhood and circumstance (to name but a few) impact our lives and our behavior in more ways than we are consciously aware. 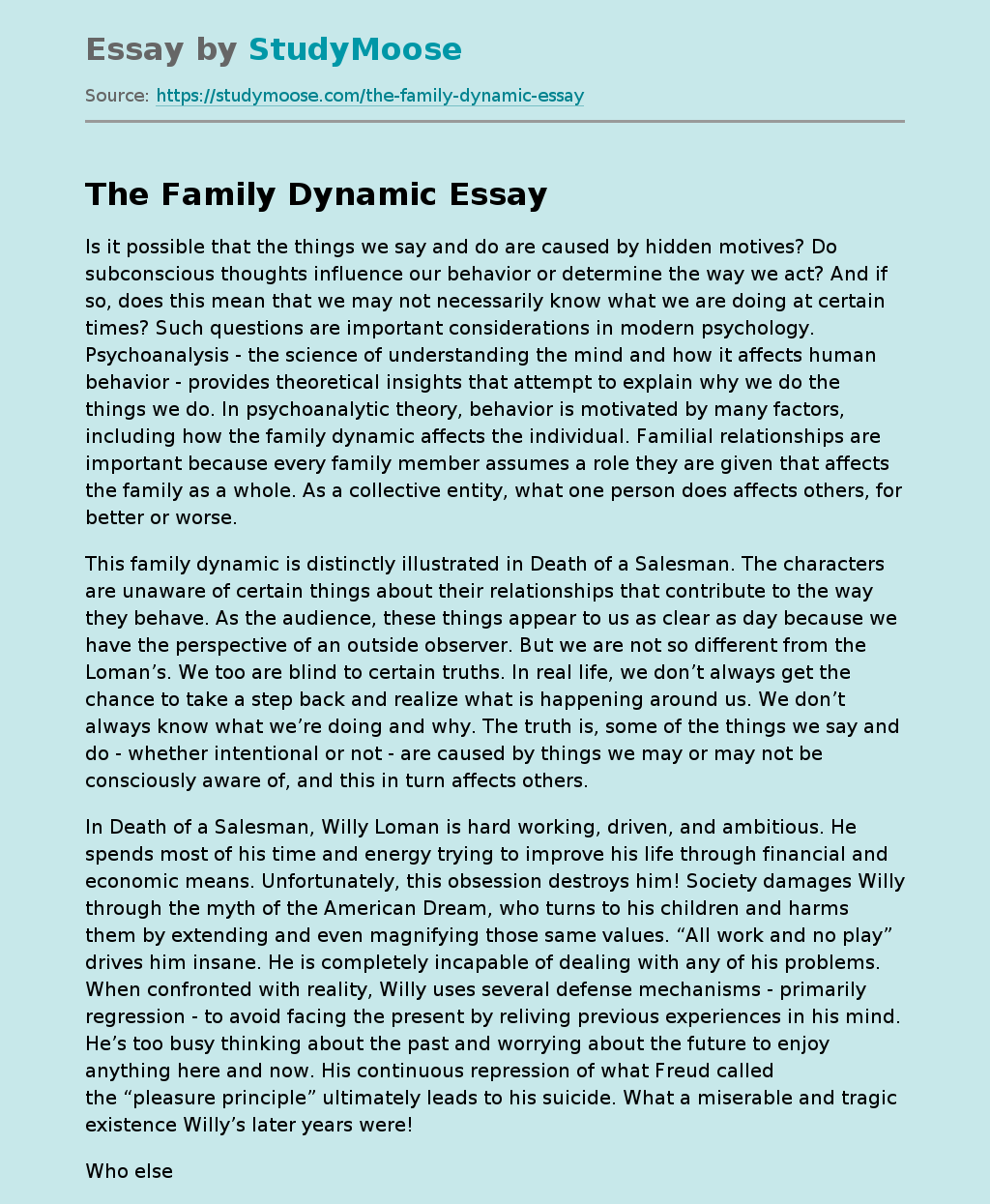