Iago is one of Shakespeare’s most complex characters and this remark does point to one aspect of his nature. His persistent need for an audience is so great that he is constantly presenting us with a choice of motives, unconcerned over which one of them is his genuine reason. His motives differ so often from what he portrays them to be, and are often even hidden form himself.

There is only one true incentive behind all his motivations, this is his hatred of Othello.

Don't use plagiarized sources. Get your custom essay on
“ Complex Character of Iago in Shakespeare’s Play Othello ”
Get custom paper
NEW! smart matching with writer

This hatred stems from the envy he holds for him. Othello is, and has, everything Iago desires. Othello is bold and courageous; yet is “of constant, loving and noble, nature;” has a beautiful wife who obviously adores him and above all he not only knows how to love but has fallen deeply in love himself. During Elizabethan times, what we today perceive as racism was rife. A black man would not be seen as an equal to a white one and Othello is uniquely privileged not only to hold such a high rank but also to be regard so well in Venice.

Perhaps if Othello was white then Iago would not have hated him so deeply? Othello was also the man who promoted Cassio to lieutenant, a position Iago coveted as his own.

In the first scene of the play we are made aware of Iago’s ability to dissemble as he informs both Roderigo and the audience that “I am not what I am”. This moment of truth provides us with insight into his character.

Roderigo and his foolishness provide the only human outlet into which Iago can pour the truth of himself but even then he must keep part of himself hidden as he relieves Roderigo of his money and feigns friendship in order to manipulate “put money in thy purse.”

By Iago’s first soliloquy we, as the audience, are very aware of his duplicitous nature. It therefore comes as no surprise that he rates doesn’t dislikes Roderigo, after all we have yet to see him be truly a friend to anyone. It is through this soliloquy that we are presented with the first of Iago’s motives and his hatred for the moor is finally revealed. “I hate the Moor.” Through the whole of this soliloquy, despite referring to Othello a number of times he rarely uses his name preferring to cast him as a racial stereotype. Once this rather shocking remark is made he does clarify it by giving a motive for the hatred “it is thought abroad that twixt my sheets he has done my office.”

Iago is determined that Othello has been unfaithful with his wife, an accusation that Emilia later refutes this claiming ” .” However her discussion with Desdemona t the end of the play provides a motive for her to sleep with Othello ” .” It begs the question is Iago paranoid or did Emilia sleep with him to try and secure Iago the place of lieutenant.

It is during this soliloquy that Iago begins to plan for both Cassio’s and Othello’s downfall “That he is too familiar with his wife”, Iago’s plan hinges on Othello believing that Desdemona could be unfaithful to him with Cassio. His couplet at the end of the soliloquy highlights his knowledge that his plan is wrong “monstrous birth to the world’s light” his use of the adjective monstrous shows that he is aware that his plan is evil and that he doesn’t care.

In his second soliloquy Iago shows how he can twist what he sees to fit his own purposes “That Cassio loves her I d well believe it;/ that she loves him is apt and of great credit.” It also denotes that he too is believing his own lies. Cassio is another person upon whom Iago feels the need to seek revenge. Cassio not only took his job but he “fear[s] Cassio with [his] night cap too.” Too compound the issue Cassio is “handsome young and hath all those requisites in him that folly and green minds look after.” The mention here of the colour green highlights Iago’s jealousy of Cassio. He also states that Cassio “hath a daily beauty in his life that makes me ugly;” To make things terminally worse he “fears Cassio with his night cap too.” We must question whether it is that Emilia who is at fault or whether Iago is so paranoid that he believes all he hears?

The initial motive given by Iago, for his disloyalty to Othello, concerns his failure to obtain the appointment of lieutenant, which has gone to Cassio. Iago is hubristic when defining his own abilities “I know my price, I am worth no worse a place,” but is derogatory of the abilities and principles of others. This could be the reason that Othello promoted Cassio over Iago and would seem to prefer the former’s company.

The soliloquy, to which Colderidge refers, Iago states “Now I do love her too,” a fleeting thought that is never reiterated and yet another reason to hate Othello. Upon closer examination he qualifies this love claiming it is not “out of absolute lust” but “partly to diet [his] revenge.” This begs the question does Iago truly know what love is?

Throughout the play Iago’s motives tend to revolve around two stimulus, greed and envy. At the end of Act One his motive is remarkably inadequate:

“I hate the Moor,

And it is thought abroad that ‘twixt my sheets

He’s done my office; I know not if it be true….

Yet I, for mere suspicion in that hind,

Will do for surety:”

Later in the play Emilia reminds us of this assertion and links it with the sceptical viewpoint that Iago holds, as she attempts to guess who might be responsible for Othello’s alteration:

“Some such squire he was

That turn’d your wit the seamy side without,

And made you suspect me with the Moor.”

From Emilia’s point of view, Iago’s cynicism amounts to a disposition of character, for which there appears to be no clear reason. Cassio too, notices this outspokenness but mistakes it for honesty as a result of being a soldier. “He speaks home, madam you may relish him more in the soldier than in the scholar.”

Even Cassio is not free from suspicion of having slept with Emilia, “For I fear Cassio with my night-cap too.” From these motives we can conclude that Iago’s aim is to corrupt; and Desdemona’s own “goodness” will “make a net/ that shall enmesh them all.”

It is obvious that Iago is an individualist who relies upon his “will power” rather than his morals. This is verified when Roderigo refers to “virtue” and Iago replies “virtue? A fig! Tis in ourselves that we are thus or thus.” He discards outright any notions of fate; (ironically this is a notion that Othello uses to explain his downfall, “who can control his fate?”) and he shows this rejection by controlling the plot throughout most of the play.

It would be too easy to dismiss Iago as completely motiveless, even though some of his motives are insubstantial when related to his actions. He is, however, consumed by hatred, whether this is related to Othello’s race, his social position or his personality, is not made clear. What is clear is that this is Iago’s driving force and while he can not be exonerated for his action I feel that he can be admired, if not empathised with, for acting on his feelings, despite the severity of the outcome. 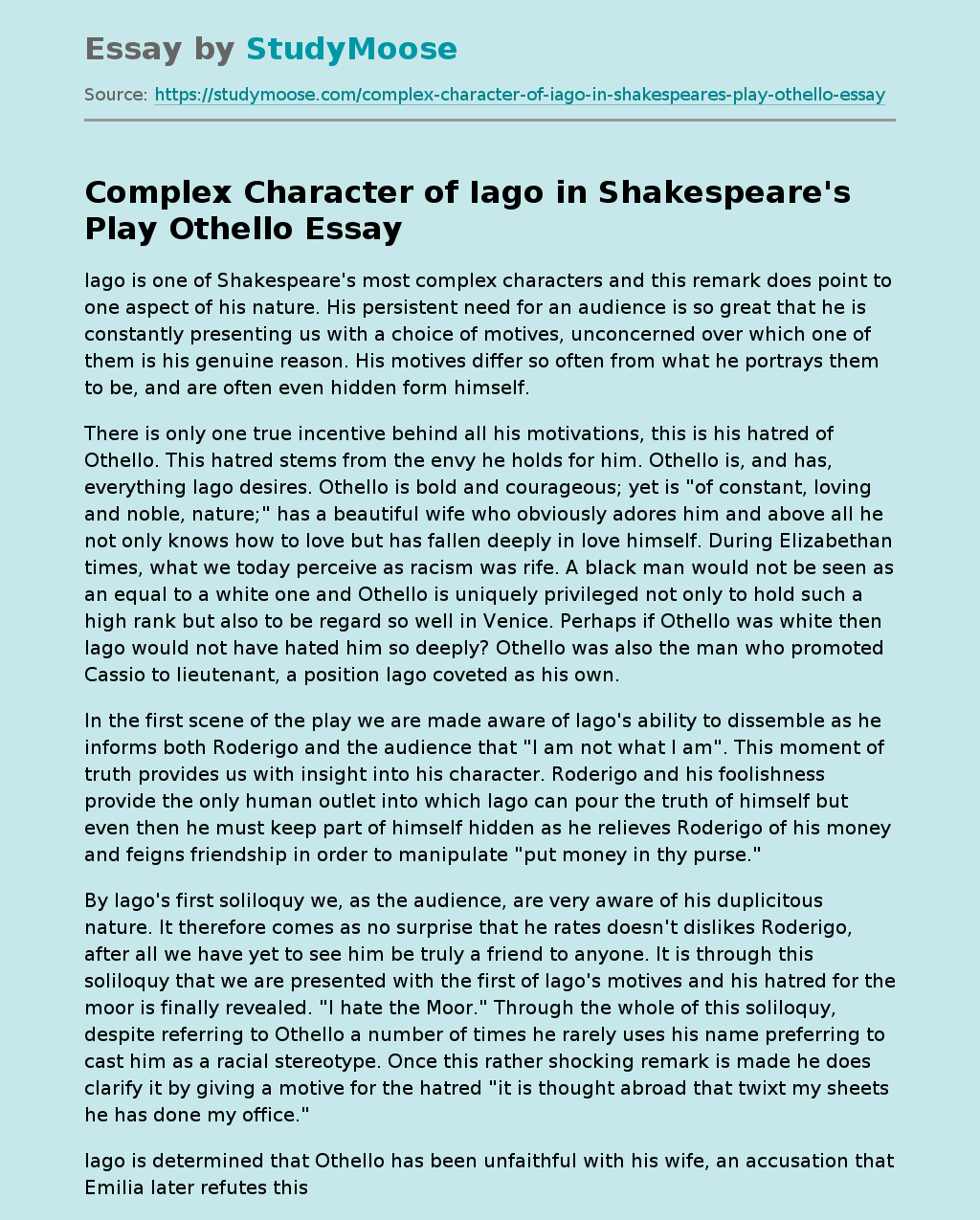