Whether the painting was intended to have deeper meaning or simply to be a beautiful portrait, the Mona Lisa is truly unique. The expression on the woman’s face is captivating and the landscape in the background is remarkably detailed. Leonardo’s mastery of the painting is impressive to any viewer while it has also been a provoker of intrigue for centuries.

In “A Great Work of Art” by Petronius Arbiter, the Mona Lisa is referred to as “mysterious” and “curiosity-arousing.

” The painting uses a triangular shaping, with the two arms as the base of the triangle and the head as the top, which Arbiter says “invests the picture with that perennial lifting power.” The lifting power refers to a sense of nobility that the woman in Mona Lisa gives off. To the average viewer, the woman is not conventionally beautiful. Her features are what Arbiter calls “irregular, too delicate, and unsensual.” The woman’s eyebrows appear almost nonexistent and she resonates of a fleshy color. What Arbiter says makes the painting mysterious to most people, is the facial expression.

He refers to the expression as a “triune mental state made up of kindly humor.” He says that Leonardo’s admiration for the woman is present in the intriguing and mysterious expression. The mastery of this expression is what Arbiter says makes the picture so wonderful. He notes the prospecting smile in the corner of her mouth and her dark, intriguing eyes. In noting such features, Arbiter says that Leonardo must have been captured by the woman in order to have painted her with such great attention to detail. Leonardo’s ability to portray her mysterious expression is not only impressive, but fantastic. His ability to do so is what Arbiter says makes Leonardo a winner is the history of portrait making; he transformed portraiture from a “representative art” to an “expressive art.” Arbiter says of the painting that “[Leonardo] made of it not only a
mere decorative record of a person, but a beautiful poetic creation which across the centuries has roused the emotions of prince, priest, and peasant.” The emotional expression that Leonardo portrayed has been an intriguing feature of the Mona Lisa to all people who view it.

In a deeper analysis of the woman’s expression “The Smile of Mona Lisa” by Gustav Kobbe’ explains its intrigue. Gustav refers to Sigmund Freud’s “Leonardo da Vinci, a Psychosexual Study of an Infantile Reminiscence” which describes a theory that Leonardo was passionately in love with his mother. In this, the woman’s expression is a reflection of the expression that Leonardo thought his mother would have in reciprocating her passionate love for him. Gustav says that Leonardo’s ability to portray emotional expression allows the viewer to perceive his deep desires and thoughts. The smile in Mona Lisa is considered characteristic of Leonardo and even has been named “Leonardesque.” Gustav notes that the ability for the woman’s expression to be seductive and at the same time a cold stare also attributes to the intrigue of the painting. This contrast represents the mysteries of a woman’s sexuality and tenderness. Preceding Leonardo’s painting of Mona Lisa, the famous smile reappeared in all of his paintings. Gustav says that as well as its viewers, Leonardo must have been enchanted by the smile as well. He says that Leonardo’s fascination with the smile was something the artist could not rid himself of. Gustav refers to Walter Palmer who says “that unfathomable smile always with a touch of something sinister” embodies the erotic experience of man. Leonardo’s fascination with the smile could also be from something deep inside of him according to Gustav. He says that his intrigue could be from a memory from childhood which was obviously important enough to cling to Leonardo after painting the Mona Lisa. Perhaps as a backbone to creating an intriguing, womanly smile, Gustav notes that Leonardo grew up with a loving stepmother and grandmother. He says that this gave Leonardo the image of safety with his supporting women. The soft, seductive smile could then have been the awakening of a memory of Leonardo’s mother. In again referring to Freud, Gustav says that Leonardo possessed childish behavior even as an adult, often engaging in play. This point attributes to the possibility of a motherly influence in the smile of Mona Lisa. The smile portrayed in Leonardo’s painting portrays an intrigue that
scholars have been trying to pinpoint for centuries. Whether of a motherly or sexual influence, the Mona Lisa captures the viewer.

The face of the woman in the Mona Lisa forefronts the detailed landscape in the background. “Observations on the Mona Lisa Landscape” by Webster Smith discusses possible explanations and meanings of the landscape painted by Leonardo. Smith discusses how the the landscape is a reflection of the human body. Smith says that the landscape rises almost to the height of the woman as if to compare with her. He notes that the mountains are at level with her cheeks and the horizon is near eye-level. The river vanishes in the same direction that figure is angled and its curves reciprocate the wave of the woman’s hair. Smith observes the slight curvature of the horizon, which he says could be to indicate the curve of the earth, and that the landscape then represents the “body of the earth.” He says that Leonardo’s diagrams of the earth consisted of the same elements presented in the Mona Lisa, being earth and watery masses. The rivers in the painting are much like rivers that Leonardo encountered in Italy but the winding river could also be a representation of the veins of the earth, notes Smith. In an infra-red photo of the painting, the paint used on the river has the same changeability of an actual river in its consistency, possibly flooding or tides. The river also consists of earthly colors which, according to Smith, agree with Leonardo’s idea that “water is nature’s carter” in which it carries the earth. As the other river in the painting is less active, Smith notes that Leonardo’s famous diagram of a young man’s straight “vessels” and an old man’s winding “vessels” could be compared to the two rivers. Following along with the idea of water relating to the body, Smith says that the circulation of water, much like that of blood in the human, is shown by a misty presence in the top of the painting then flowing down the mountain and through the rivers. In this analysis of the Mona Lisa, the portrait represents the body in coherence with the body of the earth.

The Mona Lisa is detailed picture that Leonardo’s skills are greatly portrayed in. Perhaps the reason why so many people are eager to interpret a greater meaning in the painting is because of its lifelike quality that many paintings do not obtain. The facial expression of the woman contains emotion
that is in any respects difficult to portray on an inanimate object. The landscape is exquisitely detailed and the painting itself is altogether one of a kind. Of the three articles, I enjoyed the first by Petronius Arbiter the most. He pays close attention to the mastery of the woman’s expression in the painting. I agree with Arbiter in that Leonardo’s portrait is of a much higher quality than many other portraits. The reason I believe is because the woman’s expression translates into a viewer’s response. In many paintings, faces can be beautiful and well painted but not translate emotion even further so, evoke emotion. Leonardo’s ability to do this is what truly impresses me in the Mona Lisa. What I also enjoyed about the first article was its ability to be believable without unbelievably long arguments to support an idea. The proposal that the expression of the woman in Mona Lisa is an embodiment of the mysteries of womanly love is believable because it is visible in her face. When looking at her expression, there is a sense of sweetness and sensitivity while there is also a noticeable coyness in her smile. She evokes sensuality and softness with one expression. I also agree with the second article in its discussion that the woman in Mona Lisa is a reflection of Leonardo’s mother. He was so captivated by the image himself, there must have been something inspiring and important to him about the picture. In backing this up, Leonardo having not given the painting to the woman proves he was adamant on keeping it. Leonardo’s Mona Lisa has inspired intrigue in not only the painter himself, but in viewers for centuries which proves it is a truly remarkable painting. 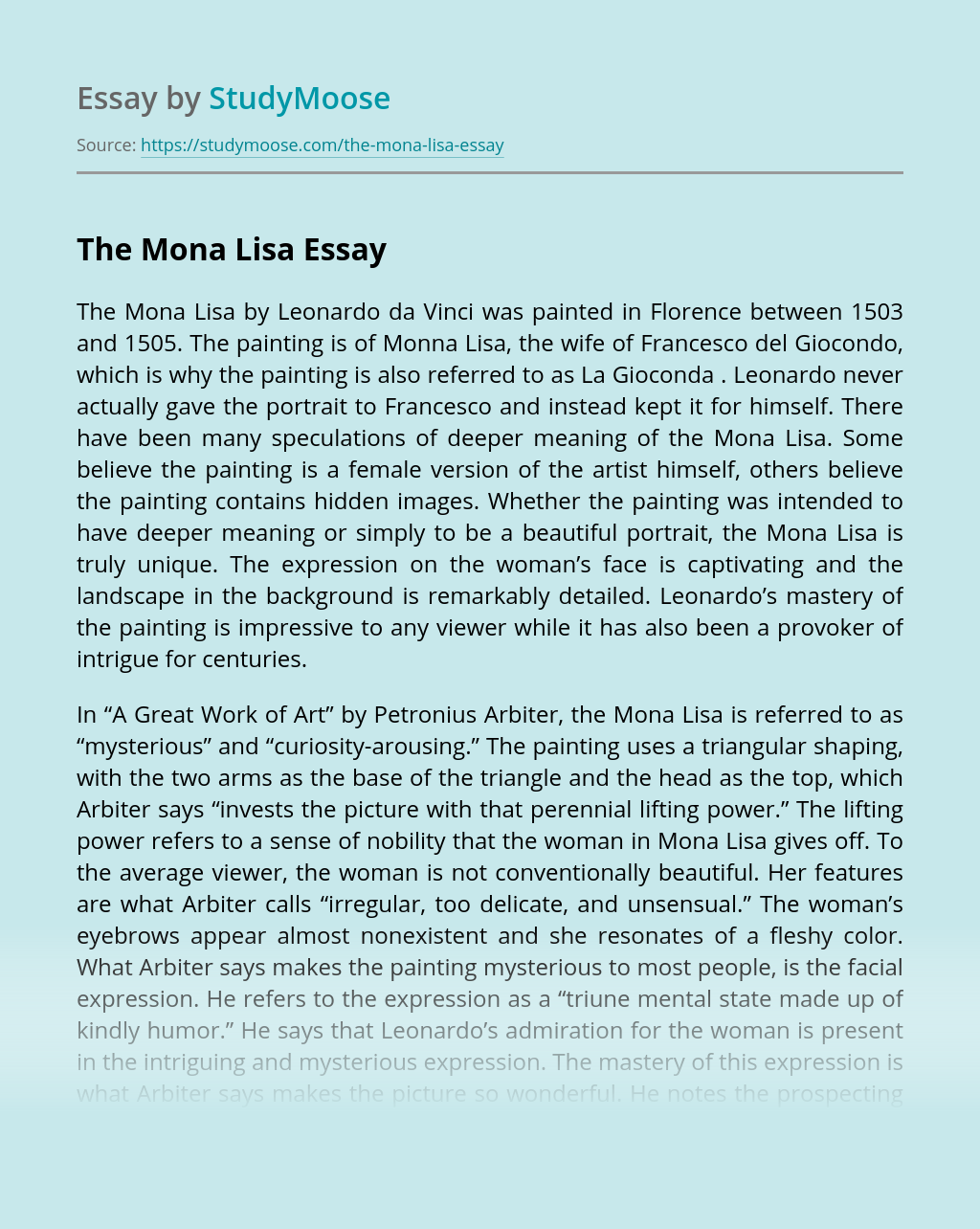