The purpose of the first leg of our ill-fated trip was to attend my sister-in-law’s wedding in a tiny suburb of Nuremburg called Weilersbach. Weilersbach is an adorable little town where men push empty wheelbarrows and women stand on their doorsteps sweeping nothing. I assume that the town was bombed during the war, but the Germans have restored it to what it looked like when gingerbread men roamed the earth. There are several businesses, quite a few homes and a windowless warehouse-like structure that I am certain contains a secret munitions factory.

In other words, Weilersbach is not exactly Rio.

The wedding took place at City Hall. Naturally, I was the only Jew present, and I suddenly found myself in the town square, surrounded by 40 raucous Germans, all of them holding champagne flutes. When the newly-married couple emerged, there was a toast, and all those German arms were suddenly thrust straight up in the air. I know it was only a toast, but maybe there should be a law that prohibits Germans from raising their arms higher than their shoulders if Jews are in the vicinity.

The day we were finally to leave Weilersbach, I woke up unable to swallow. I also had a sore throat, a horrid cough and I could not speak. The members of my wife’s family are all very sweet and offered me a plethora of Germanic remedies, but none had any effect on The Flu From Hell. So, on the way to the airport, we stopped at a pharmacy.

Interesting point: The Germans invented aspirin, BUT THEY DON’T EVEN KNOW WHAT TYLENOL IS. The pharmacist – who achieved his position by being good at mixing things – Googled acetaminophen, and gave us something which he said was about the same. It almost destroyed my stomach lining.

Next stop, Munich. By now I had every symptom known to man and was semi-delirious. Our destination was Genoa, so we boarded an Italian plane. It didn’t go anywhere. We spent an hour on the tarmac, another hour at the gate for maintenance and three hours inside the airport watching uniformed Italian women trying to figure out what they were supposed to do with us. (I love the Italians, but keep in mind that this is a country that gave us the FIAT. In case you don’t already know, those initials stand for “Fix It Again Tony.”) Long story short, after a night at the Munich Airport Sheraton (rooms designed by a midget with issues) we finally ended up in Genoa, a city that is desperately in need of urban planning. Not even the Italians know how to get home from work. We were staying at The Bentley, and as I entered the lobby, I banged my head on the glass of the revolving door, which apparently had not entirely revolved. I followed this spectacle by immediately tripping over the first step leading up to the lobby. I was now face down on the floor with coins falling out of my bag and tinkling across the marble.

The four stunning Italian businesswomen sitting in the lobby didn’t even look away from their cell phones. I collapsed on the bed, soon to discover that the Italians DON’T KNOW WHAT TYLENOL IS EITHER. My wife got me a putrid lox sandwich and then went out to the hotel restaurant to have a three course meal. The next day, my wife convinced me to get up and wobble over to an art museum. I reluctantly agreed. Unfortunately, the stuff in the museum was limited to badly painted depictions of stuffy Italian aristocrats from a century that required that people wear stupid hats. Still sick, I came very close to vomiting on one of those works of art. If I had, that very painting might now be hanging in the modernistic whacko section of the Whitney Museum, titled, “Portrait of the Doge of Genoa Covered in Puke.” If you overlook the fact that the moment I got better, I stubbed my toe so badly I thought it would require amputation, and if you overlook the fact that my wife stumbled down some stairs, scuffed her knees and almost broke her ankle, and if you overlook the fact that that very same wife got the flu in New York and slept away 2 days of our 3 days there… If you overlook all of that, it was a great trip. Remind me to take along some Tylenol next time.

John Blumenthal is the author of seven books including the comic novels What’s Wrong with Dorfman? and Millard Fillmore, Mon Amour. He has also written for television and is the co-author of the movies Blue Streak and Short Time. An award-winning curmudgeon and board-certified hypochondriac, he spends most of his time either whining or glued to WebMD in search of diseases that might match the 50 new symptoms he seems to develop each day.

My Worst Vacation. (2016, May 08). Retrieved from http://studymoose.com/my-worst-vacation-essay 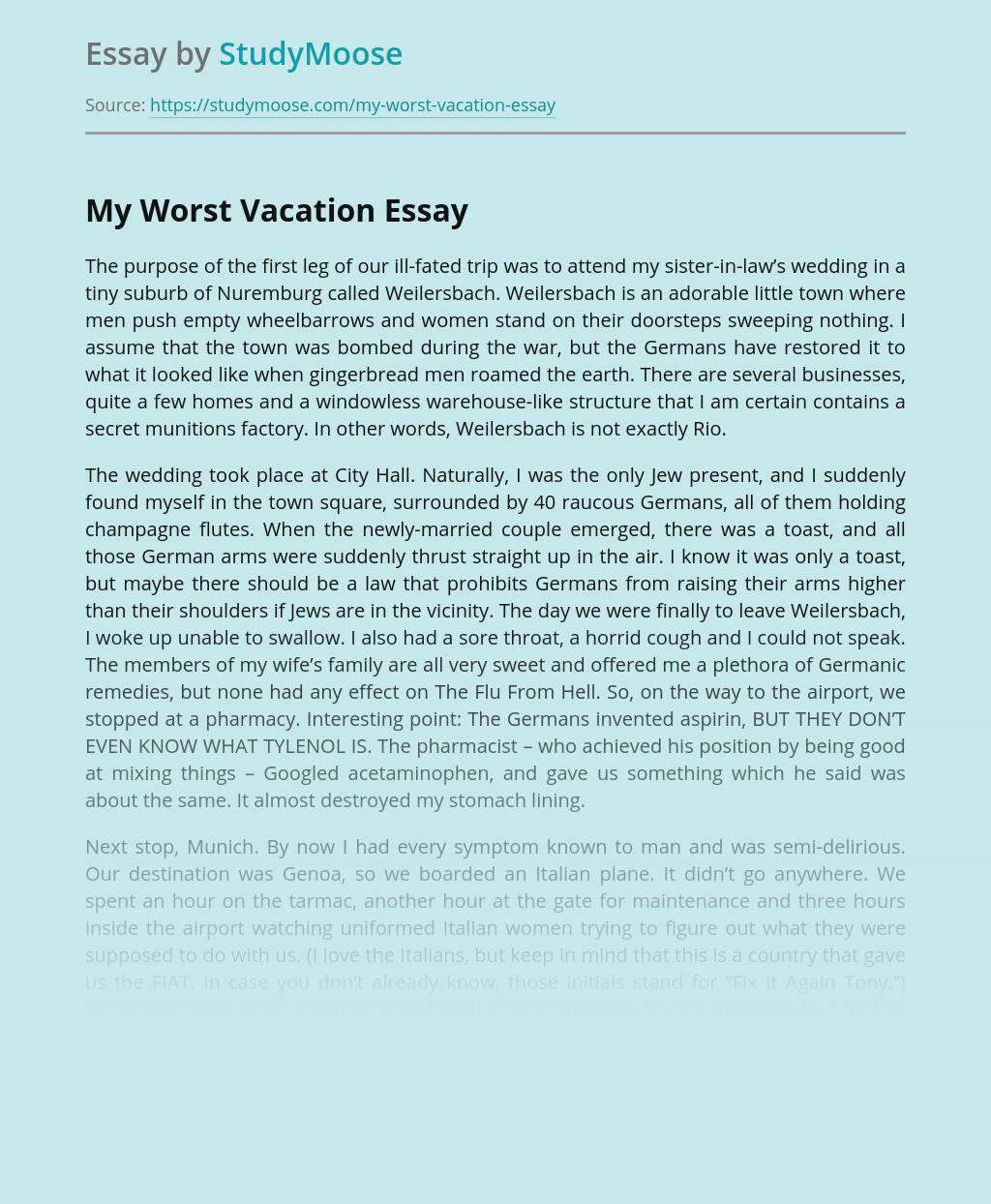