“Alone in a Mountaintop” Summary

In “Alone in a Mountaintop”, an excerpt from Lonesome Traveler (1960), Jack Kerouac describes his journey west as “a fire lookout”.
Jack Kerouac stated that he was “tired” do city life and sought solitude, so”[he]applied” to be “a fire lookout” and went west (218). (218) Kerouac started his journey by driving towards the Cascades, followed by taking a “lift”, riding on a ferry, followed by a tugboat, and climbing with a horse and mule up the northern cascade mountain. He them noted how the further on he traveled the less “inhabitants” he noticed.

Don't use plagiarized sources.
Get Your Custom Essay on “Alone in a Mountaintop” Summary Just from $13,9/Page

After two days of waiting for Andy, the muleskinner, and Assistant Ranger Marty Gohlke, Jack describes how they took the tugboat up ”Ross Lake” and started up the mountain with mules packed with enough supplies for sixty-three days and nights on Desolation mountain.

Kerouac described how he reacted when they came upon what was to be his summer home and then noted how Andy and Marty helped him set up camp.

He then settled into bed for the night.

Kerouac noted that he was now alone, Andy and Marty left. He then spent the day cleaning and turned in early to be awoken to the sounds of nature. The job, as Kerouac noted, was to watch out for fires and he noted one storm. Jack felt sympathy for all of the smoke jumpers. He noted that most days were routine. He ate breakfast and radioed in. Kerouac would lay in the meadow and eat around noon, and by nightfall he had gathered his firewood to cook his supper. Kerouac noted that two months had passed.

Kerouac explained that he discussed that the journey to solitude does not matter where you are; but it’s in one’s mind.

Jack concluded by noting as he would lead a renewed life, and as he left his summer home he “turned and blessed” “the little pagoda on top” of Desolation Mountain which he had come to adore.

“Alone in a Mountaintop” Summary. (2016, Jun 07). Retrieved from https://studymoose.com/alone-on-a-mountaintop-summary-essay 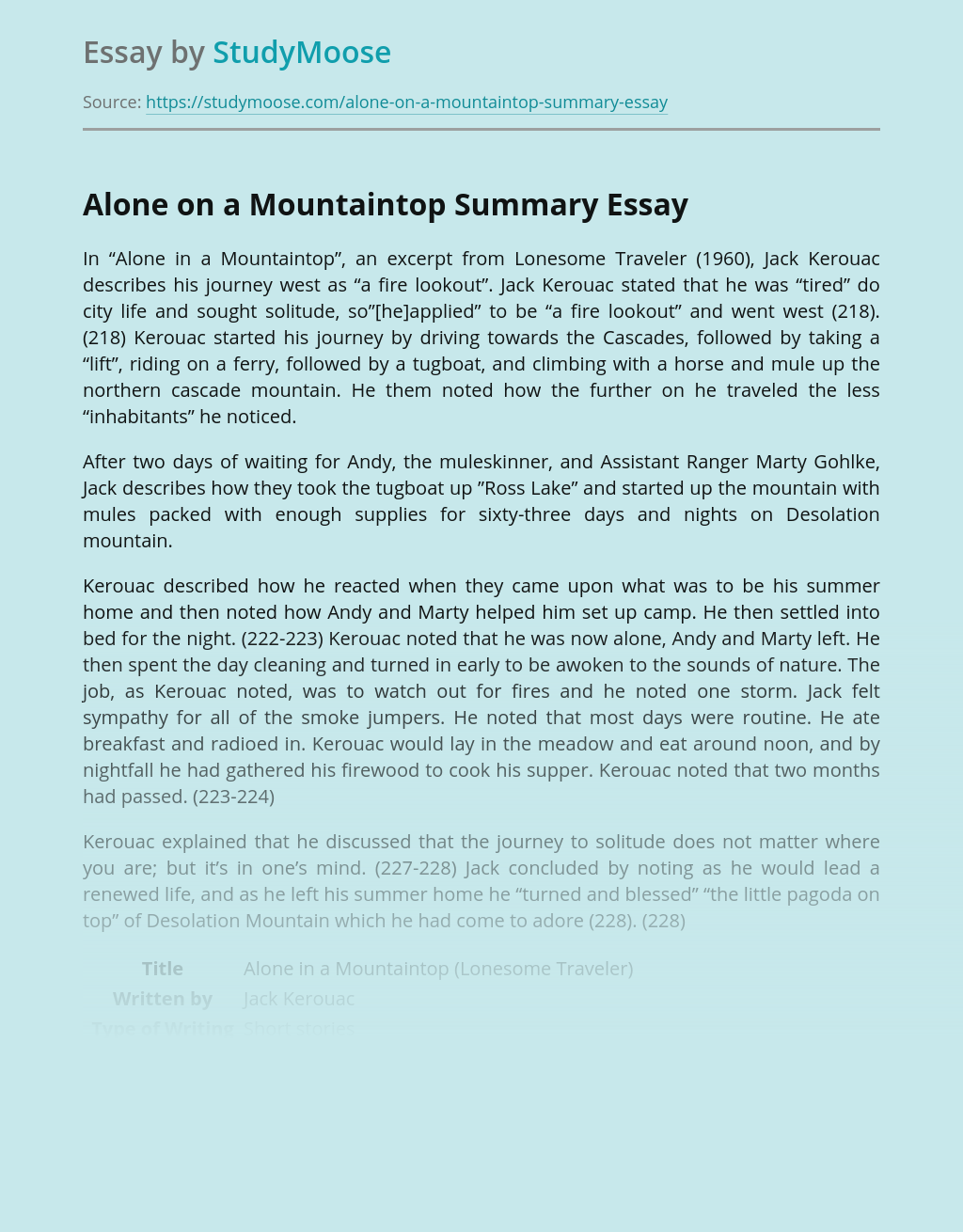 Hamlet is a tragedy by William Shakespeare. It recounts how Prince Hamlet of Denmark goes about taking revenge for his father by killing his murderer, Claudius. In act 3, scene 1 Rosencrantz and Guildenstern fail to report the reason for Hamlets ‘madness’, so Ophelia, Hamlet’s lover, is instructed by Claudius to see if his ‘madness’...

CHAPTER 19 CORPORATIONS 1. – THE NATURE AND CLASSIFICATION OF CORPORATIONS A corporation is a legal entity created and recognized by state law. It can consist of one or two persons identified under a common name. CORPORATE PERSONNEL When an individual purchases a share of stock in a corporation, that person becomes a shareholder and...

Get Essay
Design Thinking and Innovation at Apple

BACKGROUND: Apple has been a leader in innovation for years and has been able to achieve so by striving hard to deliver insanely great products with simplicity and sophistication. The constant need for innovation, development of unique product development strategies and their prompt execution, the presence of the visionary, Steve Jobs and their bold attitude...

Abstract This paper explores the significance of the plot and theatrical components of the great Greek disaster, Antigone. It discusses how although Antigone was written thousands of years ago it is still important today; it is a play that all can associate with in some way. It likewise discusses my personal reactions to the play:...

Reasons Why the English Civil War Broke Out in 1642

The English civil war broke out in 1642 between King Charles II and parliament. In the following essay I will state some of the most important factors of how the war broke out. In my conclusion I will some up what I think the main factor was that broke out war between the King and...