Analysis of "One Hundred Years of Solitude" by Gabriel Garcia Marquez

Gabriel Garcia Marquez’s One Hundred Years of Solitude, published in 1967 describes the story of the birth and death of a small, fictitious Colombian town Macondo founded by the Buendia family. Macondo, at its birth, is an innocent and isolated town located between a swamp and terrain that is separated from the rest of society. The only contact with the outside world is from gypsy visitors, led by Melquiades, who make routine visits to Macondo and bring with them new technologies that fascinate the Buendias family.

Don't use plagiarized sources. Get your custom essay on
“ Analysis of “One Hundred Years of Solitude” by Gabriel Garcia Marquez ”
Get custom paper
NEW! smart matching with writer

The novel opens with the following excerpt, which describes both the purity and infancy of Macondo:

At that time Macondo was a village of twenty adobe houses, built on the bank of a river of clear water that ran along a bed of polished stones, which were white and enormous, like prehistoric eggs. The world was so recent that many things lacked names, and in order to indicate them it was necessary to point. (page 1)

At Macondo’s conception, its innocent and solitary existence reflects the lack of advanced language, as the Buendias have no vocabulary to describe the things around them, a traditional trait of newborn societies.

Arcadio Buendia, the patriarchal figure and founder of Macondo, who derives his inspiration from the gypsies, hopes to expand Macondo by connecting it to the modern world. The Buendia family is awed by ice brought by the gypsies, and soon Arcadia Buendias’ wishes come to fruition when his wife Ursula discovers a mere two-day journey though the swamp to civilization.

As the village grows, a magistrate comes to power and begins to dictate the Buendia family by requiring their home to be a certain color. Melquiades becomes the first of many people to die in Macondo but leaves behind written prophecies that the Buendia family is not able to translate for several generations. Soon, the recentness of a world described in the excerpt above, is quickly replaced by a more modern town. Arcadio Buendia is driven insane in his pursuit of new knowledge, and he remains tied to a tree in the town for the rest of his life, blabbing in Latin and perceived as crazy by the people. Macondo’s modernization brings with it both technological and social complexities; such include increased economic prosperity, but also the magistrate’s growing control over the Buendia family and prevalent rapes of women witnessed by Aureliano, a first generational son of Arcadia Buendia.

A threat of war develops as tensions increase between the magistrate Conservatives and the Liberals. When war finally does occur, the Conservative army occupies Macondo and Aureliano, now known as Colonel Aureliano, becomes the leader of a minority Liberal army. However, he and his army soon leave Macondo to join a national civil war effort, leaving Macondo in the hands of a Conservative dictatorship. Under this regime, Macondo enters a time of peace, despite continuing national turmoil. The Buendia family becomes increasingly isolated as they face their defeat.

Arcadio Buendia eventually dies, and it rains yellow flowers; Rebecca, an adopted Buendia, becomes a hermit; Amaranta, a daughter of Ursula and Arcadio, irregardless of her yearning for love, denies all prospective suiters; and Colonel Aureliano locks himself alone and dives into his childhood love for metalwork. A major turning point is marked by the construction of a railroad that connects Macondo to surrounding civilizations, as described by the narrator, “Dazzled by so many and such marvelous inventions, the people of Macondo did not know where their amazement began. They stayed up all night looking at the pale electric bulbs fed by the plant that Aureliano Triste had brought back when the train made its second trip, and it took time and effort for them to grow accustomed to its obsessive toom-toom” (page 229).

The town is fascinated by the technological advancements that the train brings with it. Though the railroad does usher in a period of economic growth, as merchants and visitors spill into Macondo, it also does mark the beginning of Macondo’s decline. Following the growth of the railroad, Ursula’s past world and peaceful life in Macondo are dying; the civil war continues, and she realizes her once peaceful life will never return, as she notes, “The world is slowly coming to an end and those flying things don’t happen here anymore” (page 247). Ursula is not only frustrated with present Macondo, but she no longer marvels at the new technologies and innovations. In fact, her fears of a modern, capitalist Macondo are only worsened by the arrival of a banana plantation company.

Colonel Aureliano regrets his decision to be submissive to the Conservative party, especially as they welcome the rise of foreign capitalists. To fight poor working conditions of Macondan plantation workers, Colonel Aureliano organizes a strike. Three-thousand strikers are invited to meet with leaders of the plantation, however, they soon discover it is a set up. The strikers are killed by machine guns in a matter of moments, and their bodies are dumped in the sea. A five-year rain descends upon Macondo and washes away all proof of the massacre, which the plantation leaders deny ever occurred. Years later, when the rains finally cease, Macondo is completely destroyed. The Buendia house is eroded by the rain and few of the Buendia descendants are still alive. In a painfully cyclical recurrence, gypsies return to Macondo. Aureliano II makes incestual love with the only other remaining Buendia, an act which both literally and figuratively ends the Buendia household.

Aureliano II locks himself in the house and is finally able to translate the prophecies of Melquiades, which contain the entire history of the Buendia family even as it is occurring. Suddenly, apocalyptic winds blow Macondo into inexistence, as depicted in the final scenes of the book, “He had already understood that he would never leave that room, for it was foreseen that the city of mirrors (or mirages) would be wiped out by the wind and exiled from the memory of men at the precise moment when Aureliano Babilonia would finish deciphering the parchments, and that everything written on them was unrepeatable since time immemorial and forever more, because races condemned to one hundred years of solitude did not have a second opportunity on earth” (page 422). As if looking into a mirror, Aureliano II realizes the predestined, inevitable demise of his family and Macondo. The allusion to the tower of Babel emphasizes Aureliano II’s role as both a translator and interpreter. He is the only and final Buendia member as he reads the prophecies in Macondo’s final moments of existence.

The complexities in characters, timing, and events make One Hundred Years of Solitude an extremely difficult storyline to follow. However, its very structure reflects the distortion of historical memory caused by prophetic oral accounts. Marquez jumps from years and through time within each chapter and throughout the book, in the same manner an orator or storyteller recounts events. For example, following the massacre of the plantation workers, only Aureliano II is aware of the events, however his claims are radically misaligned with the true events of the massacre, as a result of perspective and the passage of time. Similarly, historical records are distorted by the authors and time. Each group has its own interpretation of history, like Aureliano’s interpretation of the massacre, and those alive to tell the story are the ones who determine how it is told and how events are remembered.

Gabriel Garcia Marquez is one of Colombia’s most well-known authors. However, he was also known as a close friend and admirer of Fidel Castro. To some degree, Marquez’s literary creation of Macondo is reflective of his own political views. Macondo is demonstrative of a utopian communist society, at its infancy when it was still controlled by the Buendia family and isolated from civilization, but it is later ruined by capitalist modernism ushered in by the growth of the railroad and banana plantation. Macondo is also symbolic of world civilization as a whole. Before Macondo is exposed to the modern world, life is simplistic, pure, and satisfying. Yet Aureliano is soon driven insane in a pursuit of knowledge; the railroad extends the national civil war between the Conservatives and the Liberals into the small town of Macondo; an the American banana plantation abuses and kills its workers. The modernization of Macondo bring with it complexities that stripped the town of its initial purity, in the same way human societies grow increasingly complex and chaotic.

Although this fictional book contains infinite elements of fantasy, magic, and impressionism, Marquez wrote a fictional novel that is a striking allegory for western imperialism in Latin America. Most notably, the foreign banana plantation brings the greatest strife to Macondo. Nevertheless, this portion of the book is far from fictional. Marquez himself, while growing up in a small, isolated town in rural Colombia, saw firsthand the consequences of capitalist advancement. Strikers against a foreign banana plantation in his town were massacred by machine guns when they demanded better working conditions, just as Marquez had written in his novel. The approximate three-thousand bodies were later thrown into the sea, in both real life and in his novel. One Hundred Years of Solitude is reflective of western suppression in Latin America, particularly in Colombia. This fictional masterpiece is a relic of Colombian history as it creatively and painfully describes the impression left behind by fifty-two years of civil war, western imperialism, and rapid modernization.

Analysis of "One Hundred Years of Solitude" by Gabriel Garcia Marquez. (2021, Dec 08). Retrieved from http://studymoose.com/analysis-of-one-hundred-years-of-solitude-by-gabriel-garcia-marquez-essay 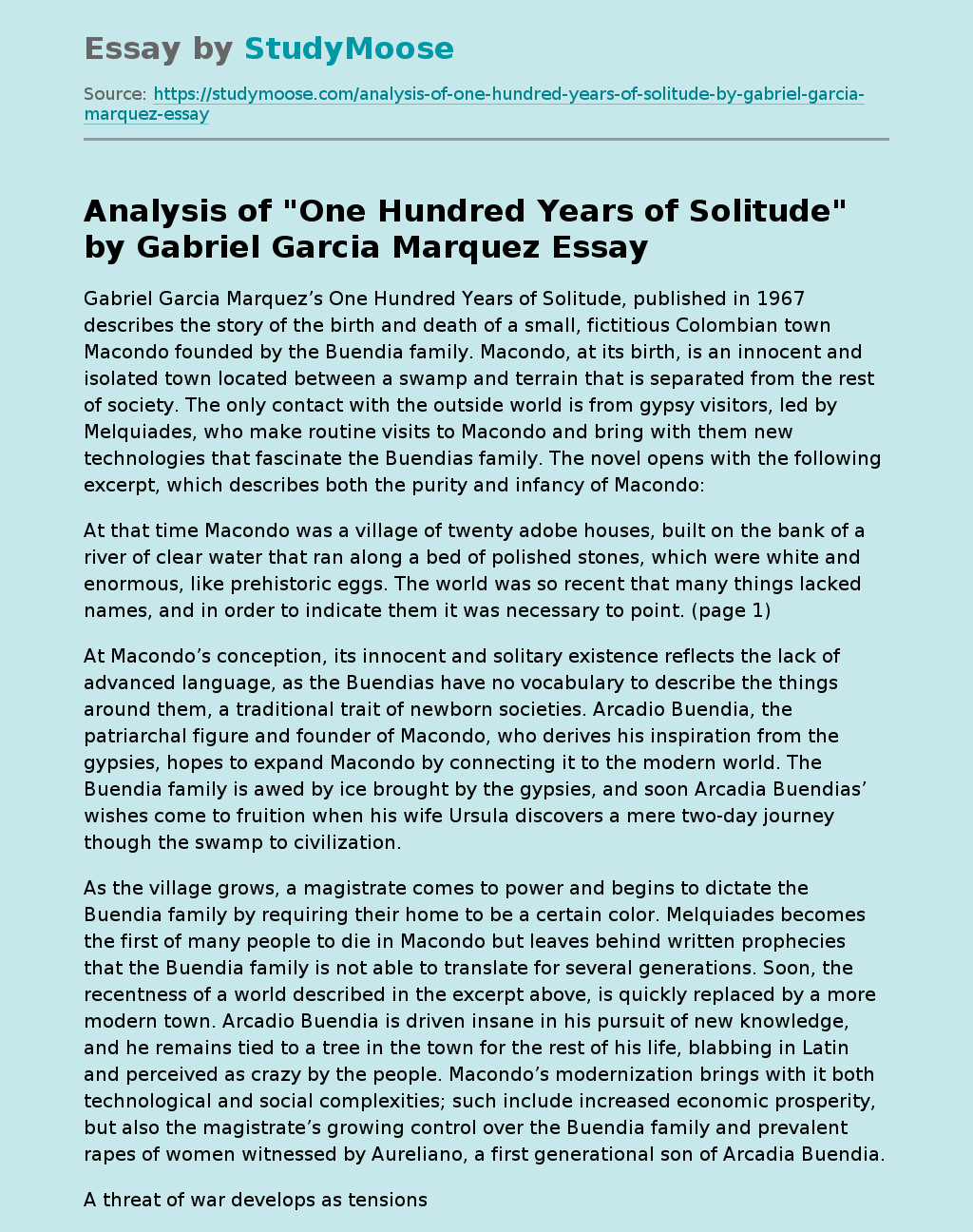