Tuesday Siesta- the masterpiece composed by a Latin American writer, Garcia Marquez, speaks volumes about  the author’s sensitivity and hence justifies its popularity.  Marquez considered it to be his best story. The short story is an excellent example of the Iceberg Technique typically associated with Hemingway. Just like an iceberg it  reveals only a part and the rest of the matter is softly veiled behind  witty hints and undertones. However the beauty of the story lies in the universal appeal  of  the theme, i.

e., the suffocation and exploitation of the poor.

The story exemplifies an intelligent use of symbolism. The place where mother and her family belongs to is characterized by banana plantation which is very scanty and not capable of providing any protection. Moreover banana is not an expensive fruit. This symbolizes poverty of the residents.  On the other hand, the place where the son was killed  belongs to the rich; this is symbolized by almond plantation. Almond leaves are huge and hence provide safety.

Moreover the lack of names of the four protagonists as well as the setting further symbolizes a specific alienation. Besides, heat and shade also symbolize difficulties, poverty, exploitation and comforts, money, favoritism respectively. The way daughter is frequently taking out her shoes reveals she is not comfortable in shoes as because of poverty she doesn’t wear them quite often. Garcia didn’t comment on their poverty but the miserable look on the mother’s face and the way she was holding her bag was enough to show their financial bankruptcy, an example of the iceberg technique.

On the whole their journey in ‘Third class car ’(105) is a symbol of segregation of society in different tiers as well as the difficult  life of poor people of Columbia.

There is a remarkable difference between the mother and the daughter.  Mother seems to have become habitual of poverty and  is very well aware of    not being  understood and not getting any sympathy from the so-called affluent people. . She does not show any weakness even at the crucial moments of her son’s death. With an exemplary poise and self-control she only wants to administer respectable burial rites of her son. She is not at all ashamed of his deeds.  She symbolizes an ideal mother who wants to secure her love for her children at any cost.

The whole of the town is in the seducing lap of siesta when they get down at a comparatively larger but abandoned station. Drawn shutters of the shops as well as the quiet trees and plants, everything tells of pleasing sleep the town is enjoying. In this oppressing heat of 2 o’clock mother and daughter are moving in the shade of almond trees trying to keep away the heat but in vain. The people living here not only enjoy the shade of huge leaves of almond tress but also the protection from exploitation. Some particular severity and   determination of purpose seems to keep them going.

Mother tells she wants to visit the grave of Carlos Centeno Ayala but the priest fails to recognize. It is here that we feel a sharp contrast between the heat outside and the coldness inside. This is the height of insensitivity that a priest , who is supposed to help the people out, tries to put them off. And the climax comes when he doesn’t know the name of a person whose grave he has prepared. Anyway the priest   tells her to give the details pertaining to the recognition of her son and herself and the mother with a lot of self control tells all the details as if she is reading those. There is something marvellous about her that all the time her voice remains pleasant but full of innumerably unexpressed things. The inexplicable pain of her voice is too profound for words.

This extraordinary poise of a mother makes the priest blush of shame. When assured of the relation  he  asks her if she never tried to bring her son to the right path. She proudly answers that he was a very good person as he had made a promise of never stealing anything which was necessary for somebody’s survival and he kept his words. This is also ironical that the priest holds family responsible for the son’s getting wayward and not the system, the real culprit.

She also tells that before turning to become a thief he was a boxer and  got a lot of blows on Saturday nights. He always had to spend three days a week in bed recovering from the punches he had got . Moreover all his teeth were extracted. At this the priest replies that the God’s will is inexplicable as if he now wants them to leave immediately. He is pathetically yawning and drowsily gives instructions to his grave. She is not at all ashamed of being his mother. It seems as if he had to become a thief out of utter need and poverty.

Anyhow they get the keys and are instructed to hang the keys at their proper place without disturbing anybody when they have come back from the cemetery after visiting Carlos’ grave. This is an example of  racial discrimination and alienation from different social set-ups. This is further highlighted by the way  in which those innumerable people, who were moments ago in the grip of siesta, have thronged the streets and were looking at the poor two of them quite resentfully. They have waken up as a stranger’s mother is there to visit her son’s grave.

However, the priest sensing a sort of danger for them advises them to wait or take a parasol with them. It seems as if the priest and his sister want to protect them from hot weather and hot temperament.  But with calm dignity and ethical superiority she steps forward  not only to face but also to overpower the heat of the weather as well as the crowd’s anger. This is a living example of the dignity and pride of a poor but self-respecting woman. This is the essence of the strength God can inculcate in a mother only.

According to a Spanish proverb Tuesday is an inauspicious day. So the mention of Tuesday in the title seems to create an ominous atmosphere. It also prepares us for bad events like death, anger, hostility etc. lack of names adds to the apparent ominous and hostile air.

On the whole ‘Tuesday siesta’ shows a stagnant setting reluctant to change. Rusty hinges of the window in the train as well as the rusty keys of the cemetery also refer to the rust prevailing in the society. The story ends with the strength of a female character which is not at all surprising with Garcia Marquez. 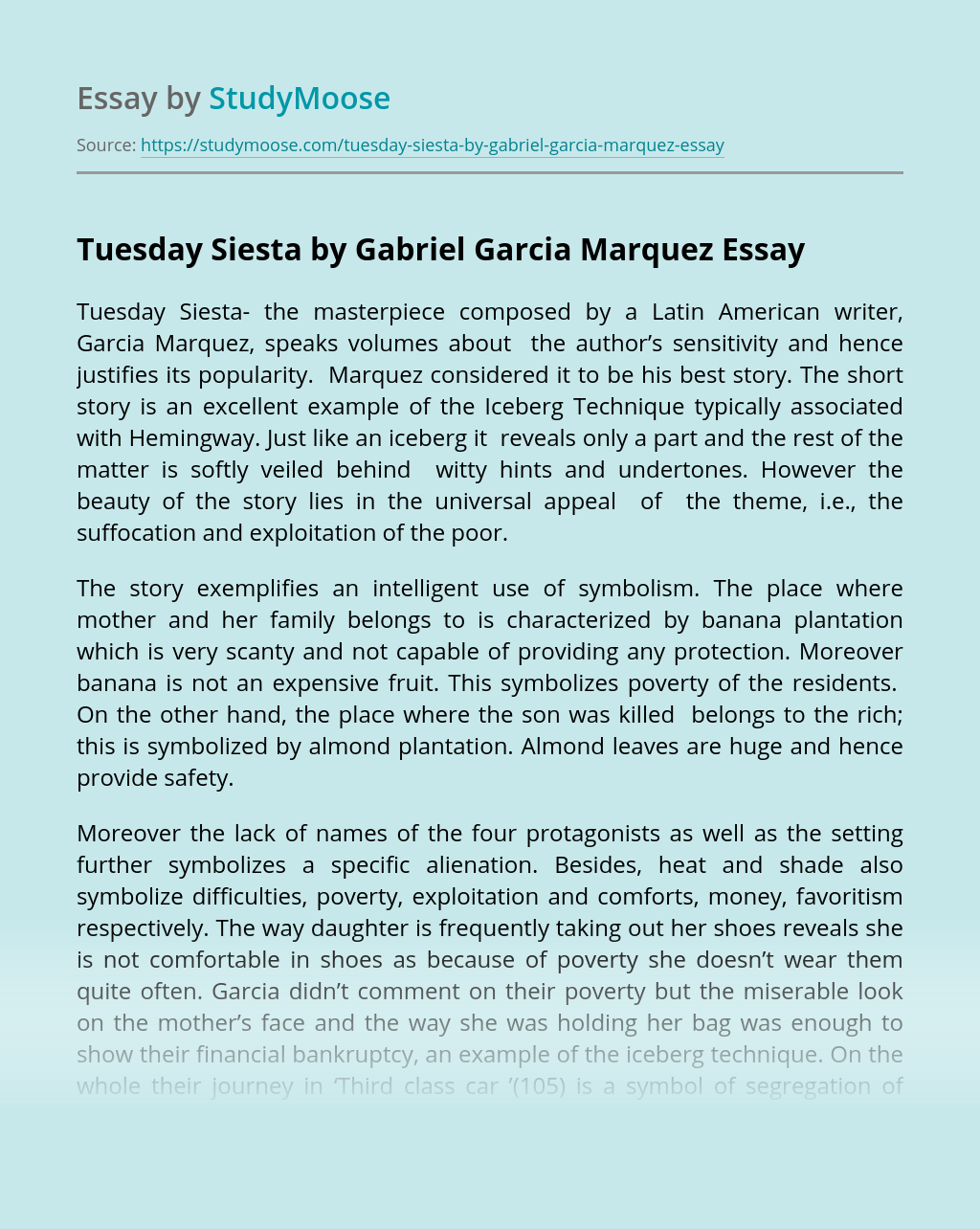